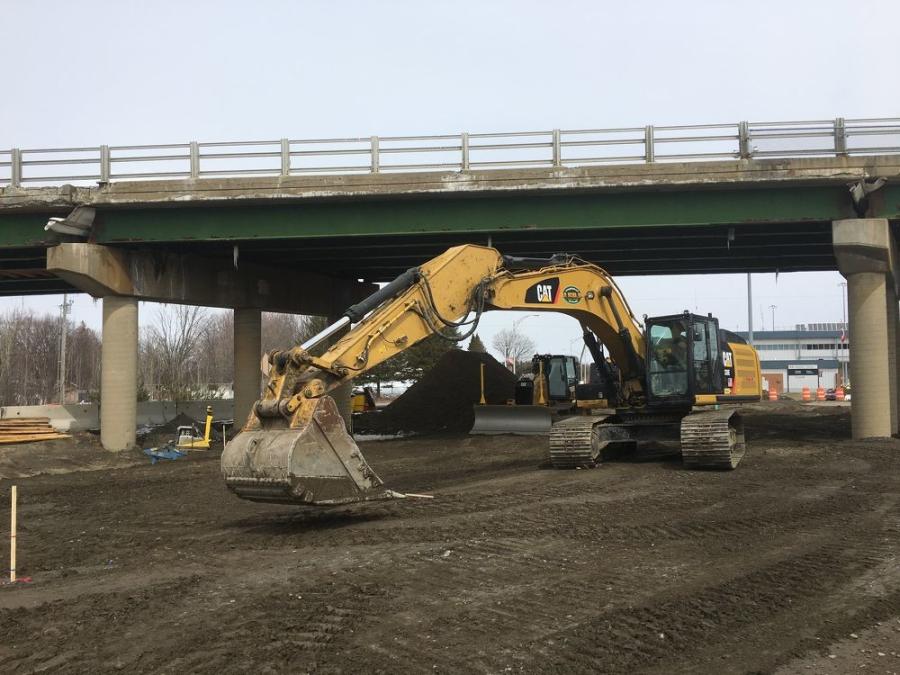 The current bridge is a five-span, two-lane structure built in the early 1960s. (Vermont Agency of Transportation photo)

Construction teams in Orleans County, Vermont have begun work on the Derby U.S. Route 5 Connector Bridge 1 rehabilitation project, which will replace the bearings, structural steel, deck, pavement and railing on the existing structure. The bridge serves motorists between Derby Line and Holland, Vermont, as well as traffic exiting from I-91 and traveling in either direction.

The construction is taking place in the town of Derby, village of Derby Line. The $5.2 million project has a high priority federal earmark.

The current bridge is a five-span, two-lane structure built in the early 1960s. The bridge superstructure, which is a concrete deck on painted steel beams, is not in good shape. The spans are not continuous across the piers, causing leakage at the joints at the piers. The bridge railing is aluminum, installed in 1991, and does not meet federal crash worthiness requirements.

The bridge has multiple failing bridge joints that have resulted in failed bearings at those locations. Spalling of the concrete can be found on the fascias and two of the four pier caps. Bearings need to be replaced and the deck shows a lot of cracking.

“The project discussion began in 2012, with some traffic analysis,” said Hisman. “There was a scoping report done which provided different alternatives for the structure, as well as how to maintain traffic during construction. Two alternatives were considered.”

The first option was a deck rehabilitation, which would have included deck patching, new joints, new fascia, spot painting of the beams, new crash tested bridge railing, bearings and other minor repairs. The alternative was the current project.

However, the contractor suggested another maintenance of traffic plan, allowing the entire bridge to be built at once, saving a good deal of time.

Construction is expected to be completed this fall. Commencing work was a challenge, because of less than favorable outdoor conditions.

“In Northern Vermont, weather is always a factor in highway construction, especially in the spring and fall,” said Hisman. “It's made getting started on this project particularly difficult. Unseasonably cold temperatures in March and April, along with several snowstorms and significant rain events, have caused delays related to building the project detour.

Weather has actually delayed the project by close to a month, since no other work can begin until the detour is implemented. 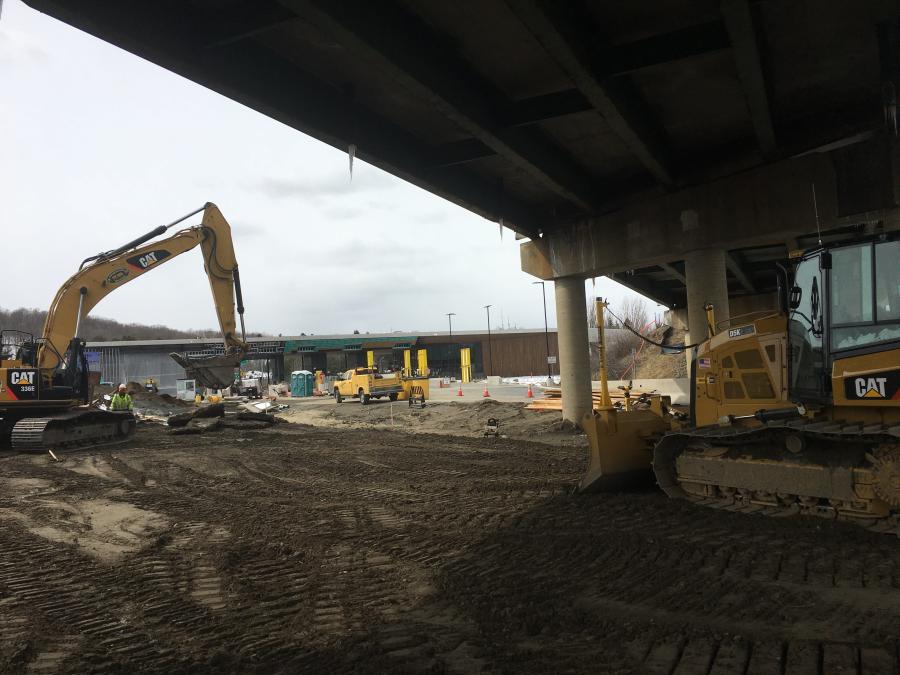 “Because the construction methods have shifted from phased construction to a full bridge closure, there remains time to complete the project within the allotted contract time. A total closure requires about half of the number of concrete pours and subsequent curing periods as does phased construction, which eases the schedule a bit.”

Prior to construction, there was a significant amount of snow in the area, which complicated matters.

“This included a very large snow pile in the location where the at-grade crossing was to be installed,” said Hisman. “This was the location that the general contractor that's building the new U.S. Port of Entry was using for snow storage. The U.S. Port of Entry re-construction project was going full-bore immediately adjacent to the bridge when we showed up to begin bridge work.

“Being a large project with a large footprint, their site was overflowing and was taking up some space needed for the bridge replacement project. After a few reminders were sent to the contractor from VTrans, they made way for the bridge re-construction effort.”

The new bridge superstructure will be a paved concrete deck supported by un-painted steel girders. The girders will be continuous across all four spans of the rehabilitated bridge. The new bridge rail will be made of galvanized steel tubing. On the bridge there will be two travel lanes and two wide shoulders for pedestrian and bicycle use.

According to George Carpenter, project manager of general contractor J.P. Sicard Inc., “The biggest challenges are the limited work area and traffic congestion. The international border and adjacent port construction project limits the area we can utilize to construct the bridge. Traffic can back up for miles northbound and southbound at the project, as motorists try to cross the border. The congestion makes it difficult to impossible to access certain areas.”

Carpenter also noted that workers have struggled to install temporary detours, due to frozen ground, snow, freezing rain, rain and thawing conditions. Rain storms will continue to be a problem throughout the project.

Crews have already installed erosion protection measures, subbase for temporary detours and timber mats for an adjacent staging area. They are currently constructing a detour road to the south of the project and installing temporary traffic signals.

“Once the detour road is implemented, we will begin demolition, starting west to east,” said Carpenter.

During construction, one of the supporting piers will be removed, the cap beams on the remaining three piers will be rebuilt, and the existing abutments retained. All work has been carefully planned.

“As the superstructure is removed, we will remove the pier caps,” said Carpenter. “The caps will be cut off at the top of each column, and the cap will be cut in half vertically to reduce the weight of the crane picks. The western most pier will be demolished to six inches below grade. Reinforcing steel will be drilled and grouted into the top of each column, and falsework will be installed to construct the new pier caps. We anticipate one to two months for this work.”

Once pier cap and abutment rehabilitations are complete, structural steel girders will be set starting in the center (median) section, then the west will be set and finally the east.

“Concrete deck construction will be formed utilizing beam hangers, overhang brackets and lumber. The deck will be poured and finished with a hydraulic powered finisher. Curbs will be constructed, followed by membrane and paving.”

Approximately 670 linear ft. of galvanized steel tubing will be needed for the new bridge rail. Rail will be installed on anchors cast into the deck and curb.

Most of the early site work has consisted of building the detour and installing a temporary construction entrance between the exit 29 on/off ramp and the NB barrel of I-91.

Hisman said the temporary entrance crosses a wetland area, so no excavation is allowed.

“It consists of crane mats placed over existing vegetation. We have had success with this method in the past. Vegetation bounces back very quickly once the mats are removed.”

The bulk of the excavation work will be in digging to the cutoff elevation of the abutments and for grading the approaches to the bridge.

Said Hisman, “This will consist of excavation of existing material and replacement with select materials [dense graded crushed stone at the approaches or granular backfill for structures around the abutments and wingwalls]. Because this is a rehab project, there is not a significant amount of earth work involved. We anticipate roughly 600 cubic yards of material to be excavated in the complete and accepted work.” 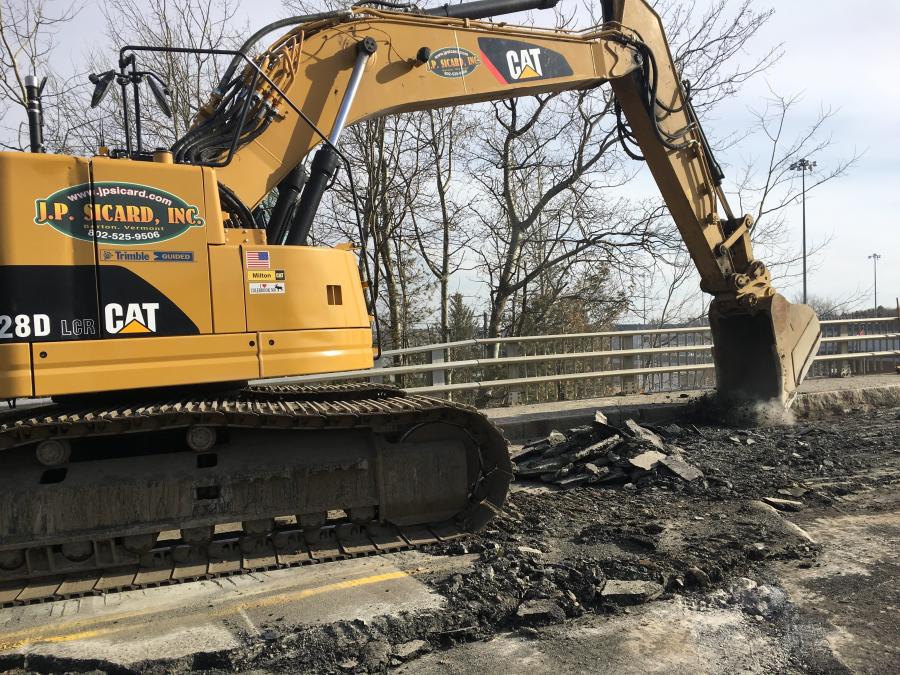 The main equipment used on this job will include a crane and excavators. The main excavator to be used in demolition and excavation work will be a Cat 336E L. Also used will be a Cat 328D LCR and a Cat 330B L. These will be used in conjunction with a Kenco Slab Crab to remove sections of the existing deck. The existing structural steel will be removed using a Grove GRT880, an 80-ton rough terrain crane.

The deck will be supported by six plate girders with a total weight of 424,060 lbs., including diaphragms. They will be lifted into place with a crane positioned either in a closed lane on I-91 or within the median, depending upon the span in which steel is being erected.

“Being mostly a superstructure replacement project, the main materials will be concrete, structural steel and reinforcing steel,” said Hisman. “The reinforcing steel in the pier caps will only require level I corrosion resistance.”

He added, “Since we are using a continuous girder design rather than simply supported spans, we have eliminated bridge joints at the pier caps. This is favorable, because it basically eliminates the potential for exposure to salt in the winter months. The abutments and deck require a higher level of corrosion resistance, since those areas are most likely to have direct contact with salt from winter road maintenance.”

Hisman said the most time-consuming part of the work will be preparing the bridge deck for concrete. Building forms and then setting and tying reinforcing steel will take several weeks to complete on the 318-ft. long, 36-ft. wide bridge deck.

While work is under way, traffic is being detoured to an at-grade, signalized, intersection on I-91. In the vicinity of the project, the interstate speed limit is 40mph, because of the close proximity to the border crossing. Because of this, and the fact that non-phased bridge construction provides a much better end product, VTrans and FHWA have allowed the contractor to install this temporary crossing, which allows them to close the bridge completely.

“A paved diversion in the median between existing piers two and three will allow the contractor to close a barrel of I-91 and divert traffic so that the risk of material and construction debris falling onto live traffic is eliminated,” said Hisman. “They are able to completely divert the flow, so that traffic is never traveling beneath the portion of the bridge being worked on.

“As with any type of rehab work, the main goal is to try to replace the parts of the bridge that have degraded, so that what's being left in place from the original construction will have the same service life as the new portions. This is being addressed by completely replacing the superstructure and pier caps, as well as the abutments above a specific elevation.”

When the abutments get cut off at the specified elevation, crews will have to closely inspect what remains in order to ensure that what they are building on is structurally sound and will not become the weak link in the structure. There are repair items included in the contract, so that any problem areas that need further rehabilitation/repair in the substructures can be addressed.

Hisman said sustainability was also a chief concern. “A combination of safety, construction cost, life cycle costs and that the new bridge can meet any future capacity demands were evaluated for this project, to ensure that VTrans is providing a product that will serve the needs of future generations.”