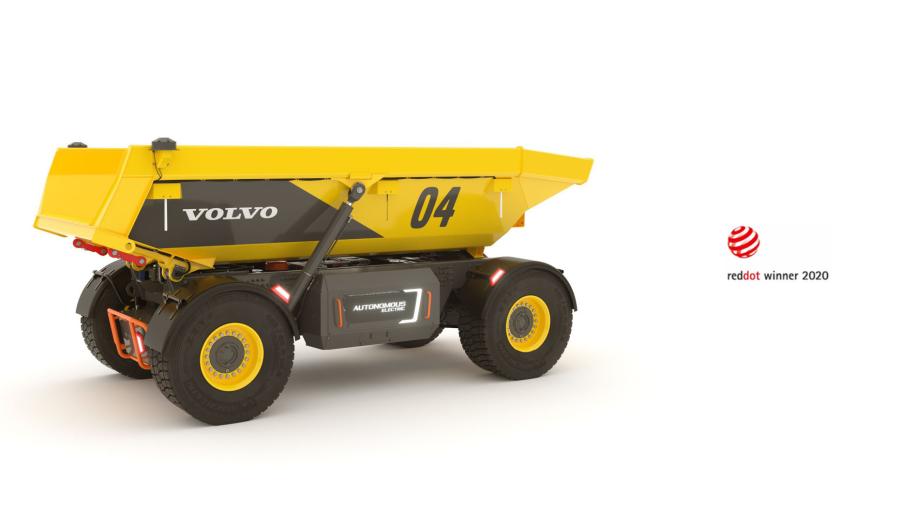 With a 16.5 ton (15 t) hauling capacity, TA15 forms part of the wider TARA autonomous transport solution concept, so that a series of them can be connected together to form a "train" of machines, for maximum loading and hauling efficiency.

The TA15 autonomous electric hauler from Volvo Autonomous Solutions has wowed a panel of design experts in Essen, Germany, to win a Red Dot Product Design Award 2020 – a seal of high design quality from the world's largest and most distinguished design competition.

Commenting on the award, Nils Jæger, president at Volvo Autonomous Solutions, said: "We are thrilled to have won such a prestigious award as the Red Dot. It shows that we are delivering world class designs at the cutting edge of autonomous vehicle technology. We are proud to continue the Volvo Group tradition of being innovative leaders in the commercial vehicle and machine design arenas."

The battery-electric load carrier is a new machine concept, compared to traditional off road hauling, and forms one element of Volvo Autonomous Solutions' TARA transport solution. It is designed to disrupt today's off-road hauling.

The hauler runs on a battery-electric drivetrain based on shared technology from the Volvo Group. The automation system uses GPS, Lidar, radar and multiple sensors. Being autonomous, the TA15 has no need for a cabin – making for a dramatically new machine profile.

The autonomous electric hauler was, and will continue to be, developed by Volvo Construction Equipment (Volvo CE) based on the former HX02 concept and has now been handed over for commercialization to Volvo Autonomous Solutions, a new business area of the Volvo Group.

Operational since Jan. 1, 2020, Volvo Autonomous Solutions' objective is to "accelerate the development, commercialization and sales of autonomous transport solutions, as a complement to the Volvo Group's current products and services."

Volvo CE also won a Red Dot award itself this year, for a machine that, due to the Coronavirus outbreak, will be introduced to the market later this year.

"It is exciting that two Volvo products have been awarded this internationally recognized mark of design excellence," said Melker Jernberg, president of Volvo CE. "On top of that, it is great that this is the result of a great internal collaboration with Volvo Autonomous Solutions. Partnership is the new leadership."