The erection of the steel frame for the 101 South Street tower is eing constructed by DLJ Real Estate Capital Partners (DLJ RECP) in joint venture with Leggat McCall Properties (LMP) as part of the Boynton Yards development in Somerville, Mass.

This is possible due to W. L. French Excavating Corporation having completed the digging of a rectangular-shaped mass excavation for the 289,000-sq.-ft. tower. The Class-A lab building will have four floors of underground parking, a main floor and eight stories of office/lab space. 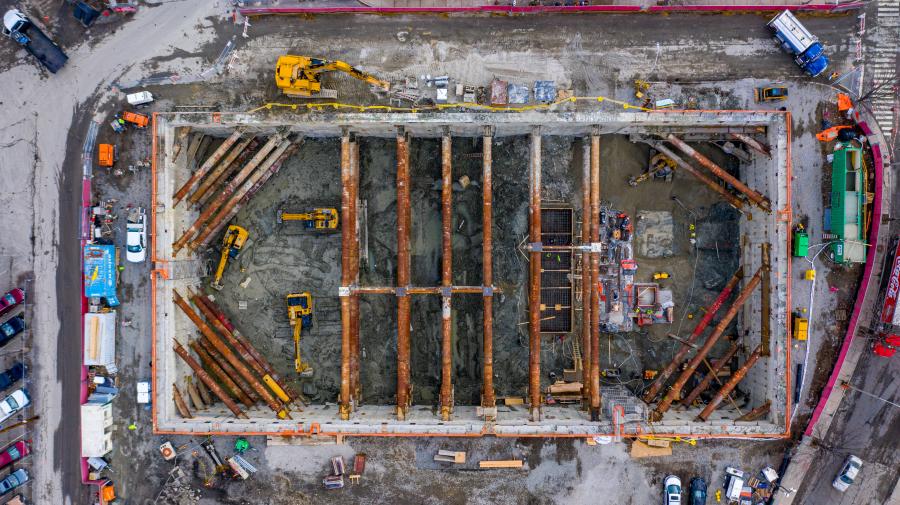 Shawmut Design and Construction is serving as the general contractor. Construction began in June 2019 and is anticipated to be completed in August 2021. The mass excavation/building footprint, which was completed between September and December, is 118 ft. wide, 239 ft. long and has a depth that is on average between 33 and 38 ft., with the maximum depth being 43 ft.

Boynton Yards, a 3.5-acre site, is located adjacent to cultural amenities at Somerville's Union Square and Cambridge's Inman Square, and less than one mile from Kendall Square, the epicenter of the biotech/life science industry. It will be a five-minute walk from the MBTA's new Green Line Extension (GLX) Union Square subway station.

"The mixed-use building will match the quality and specifications of other Class-A lab buildings and will provide advanced lab space geared toward emerging life sciences companies," the developer said. "101 South Street is the first phase of what is envisioned to be an 18-hour, work-live-play neighborhood offering over one million square feet of commercial, residential and retail uses, arts and performance spaces and public green spaces. DLJ RECP and LMP are currently developing an overall master plan for the site with the city and its planning staff and engineering teams."

"More than four years ago, we were drawn to Somerville due to the mayor's vision to overhaul the zoning with a transformative city-wide masterplan based on community values including diversity, economy and innovation," said John Fenton, principal of DLJ Real Estate Capital Partners. "We are excited to lead the new future of Somerville with a modern multiphase commercial development. 101 South Street will reflect the culture of the area's professional and artistic community while delivering on the city's plans to redevelop Boynton Yards into a vibrant, mixed-use district of lab, research, office, multifamily, neighborhood retail and community arts space." 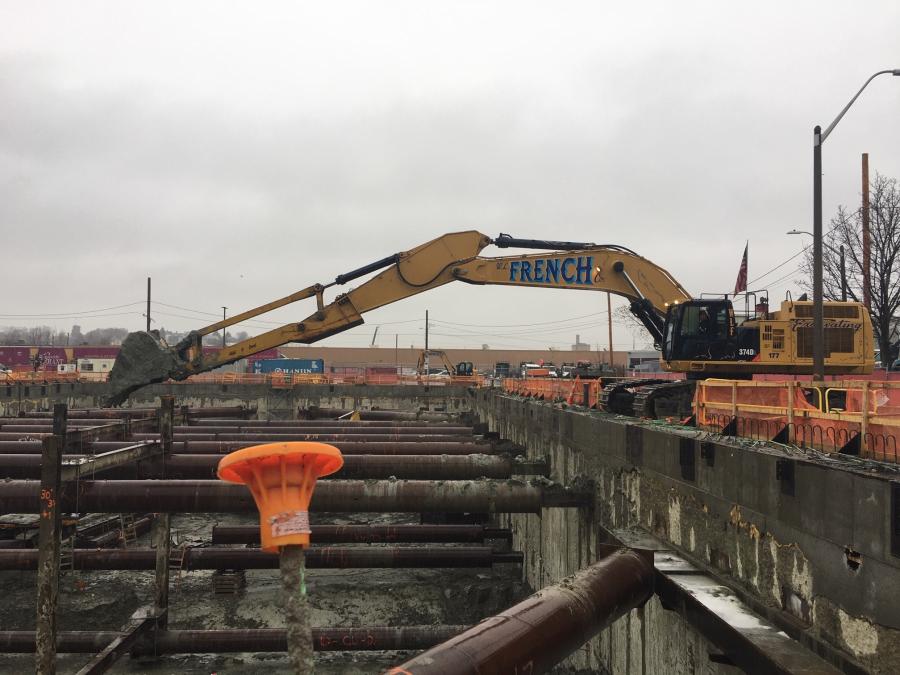 "The redevelopment of Boynton Yards into a modern, commercial hub has long been envisioned by the city," said Rob Dickey, executive vice president of LMP. "This is a great example of how strong civic leadership, community support and private investment can result in strong economic development."

The area, between Windsor Place and Harding Street — north of and adjacent to South Street — is being transformed from one consisting of parking lots and industrial buildings.

W. L. French, as a subcontractor, has played a key role. In addition to excavating the hole, it is installing the infrastructure for water, drainage, sewer, electrical and telecommunications, as well as the restoration of the road, putting in curb and sidewalks. The utility infrastructure work had only started when the COVID-19 situation had all non-essential work sites shut down by the state in March. The majority of the road work, including curb and sidewalks, will be done in Spring 2021.

"This was a slurry wall project due to the depth of the excavation," said Andre Gugliotta, W. L. French's senior project manager. "The foundation footings are completed and the underground utilities — plumbing, electrical and the drainage system — are under the slab.'

Nearly 98 percent of the slab-on-grade has been poured.

Before the hole could be dug, some minor demolition was required to remove obstructions for the slurry wall installation. When the wall was built, W. L. French crews chipped slurry wall over pour to exposed rebar so that the concrete subcontractor could finish the cap beam construction.

The first step for the dig was to create a working platform for the slurry wall crane to sit on. 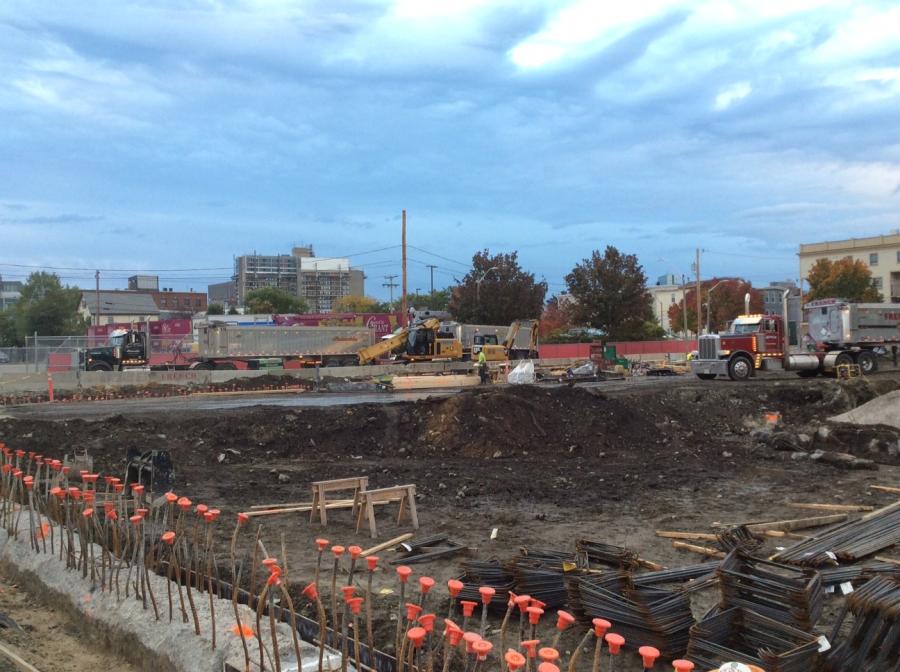 "The excavation was a rectangle with corner bracing on each corner comprised of three levels down on one end, two on the other end and center bracing in the middle, excavating between and around each level of bracing to each desired elevation depth," added Gugliotta. "Two Gradall XL 5200s worked under the bracing. With the bracing, we could not make a ramp to get in and out."

The slurry wall work took place in June through September 2019 and excavation began in September.

"We put in a de-watering open sump system below the water table that is still running now," said Gugliotta. "It had to be this way as soon as we hit the ground water."

With the bottom excavation achieved, spread footings, which were deeper, had to be dug in sequence.

"We excavated for the foundation footings and then poured a three-inch mud mat prior to placement of the foundation footings," said Gugliotta. "Then it was time for the backfill. When you're into deeper foundations and taller buildings, some of the footings can be upwards of nine feet tall, once the forming and rebar are in, the concrete is poured and forms stripped back fill material is placed around the footings. We still have to backfill the high wall for the parking ramps." 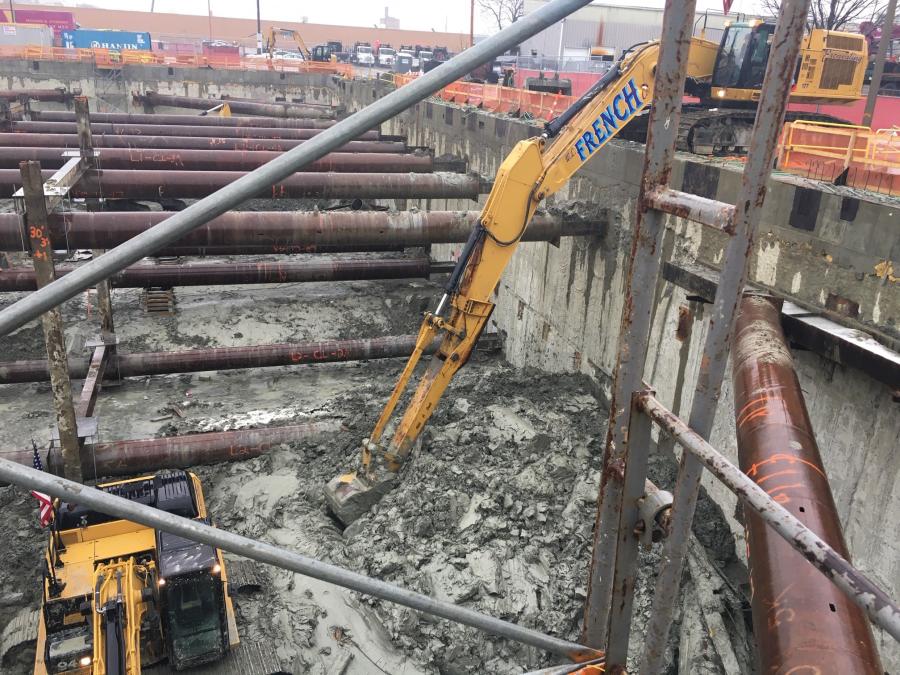 A GPS machine control system was utilized for the mass excavation's layout to ensure that each element of the foundation infrastructure could be properly placed, such as under foundation slab structures and pipes.

Excavation crews did not encounter any rock and the 68,000 cu. yds. of earth that were removed was brought to disposal facilities, carried by W. L. French Peterbilt tractors with East trailers

Removing the earth, especially at the lower levels, was not easy.

"Basically we daisy chained material from one machine to another (a Cat 349 excavator and a Gradall XL 5200) to a load out area, where we had a large Caterpillar 374 excavator on the ground level with a long stick and boom that could reach the bottom of the hole," said Gugliotta.

Another challenge involved the slurry wall.

"Once in place, there were keyways for the different parking levels of floors that we had to chip out," said Gugliotta. "There were also steel embeds for the building steel that also had to be chipped out by hand with pneumatic hydraulic breakers at each parking level elevation which was labor intensive."

Peak days has 15-plus W. L. French personnel on-site (Mondays to Saturdays, day shifts), along with six people from Shawmut.

Gugliotta is assisted by Superintendents Robert Connerney and Nick Engel, who is providing project management support.

"The sequencing of the excavation was coordinated by field director Maurice Gallagher Connerney and Engel," said Gugliotta. "Connerney had to coordinate daily with crews W. L. French dispatched to maintain production of the excavation and trucking support to remove the material daily to disposal facilities. This required dedicated laborers and staff that worked in adverse weather conditions that continued labor efforts to chip keyways and maintain pumps and hoses of the dewatering system as the excavation lowered." 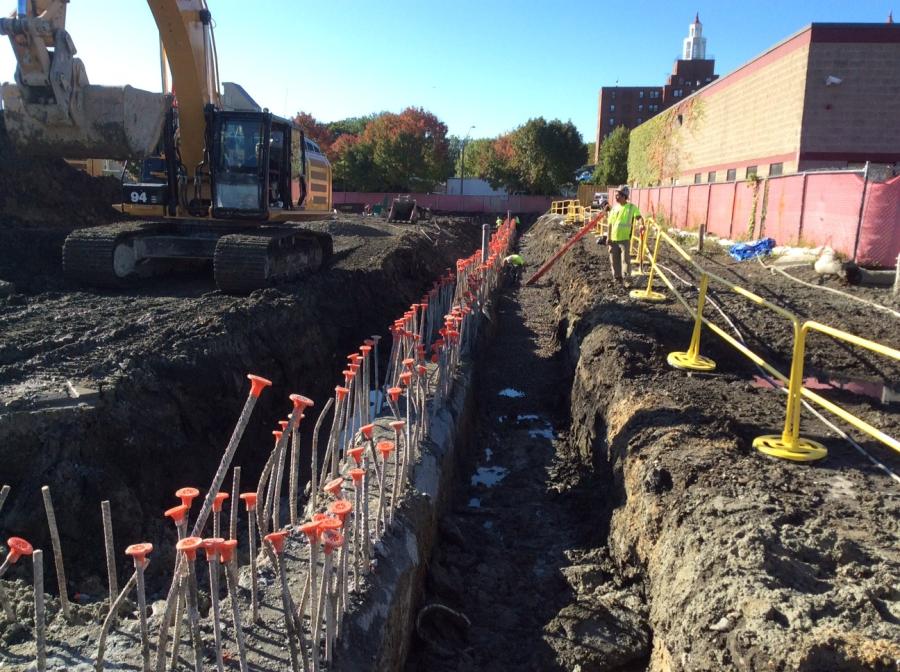 W.L. French purchases its Cat machinery from Milton CAT. Other equipment is purchased from C.N. Wood in Woburn, Mass and Peterbilts from The Pete Store in Plainfield Mass.

"We always reach out to them and they're happy to provide their services," said Gugliotta. "When we need support to recalibrate our GPS systems — Topcon or Trimble, they're always there for us."

"The project was progressing slightly ahead of schedule prior to the COVID-19 construction ban, so I would say the team has done a great job thus far," he said. "Some of the major challenges looking forward is having to work through the COVID-19 pandemic and the new work environment. We have implemented a robust COVID-19 response plan that will address these challenges. Overall, we continue to look for potential problems and have solutions ahead of time. I expect the steel erection and concrete deck pours to be executed as planned." CEG