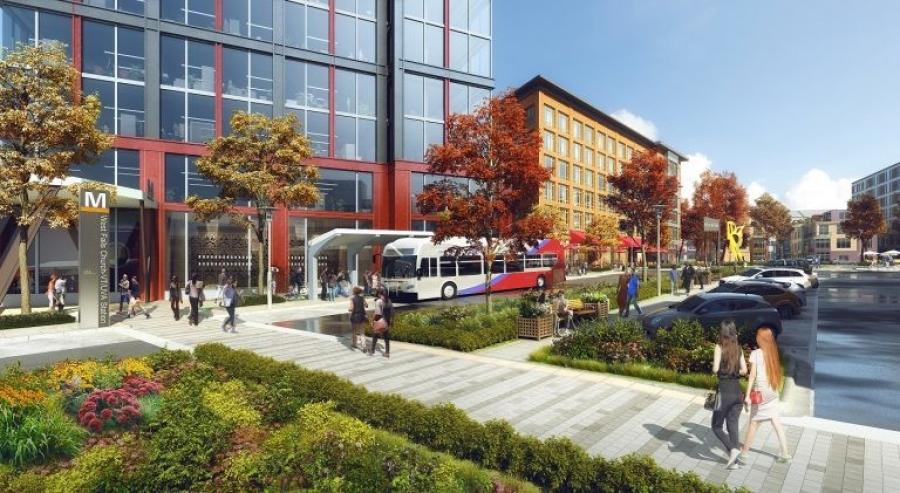 The West Falls Church Metro Station site will have more than a million square feet of office, retail and residential space. (WMATA rendering)

The Washington Metro unveiled an ambitious 10-year plan April 7 to build housing and commercial space on 20 properties the transit system owns, which the transit agency projects will bring thousands of customers and millions of dollars in rent and fares.

The commuter line serves the District of Columbia, Maryland and northern Virginia.

The Washington Post reported that by diversifying various income streams, the Metro is trying to provide a hedge against the prospect of looming financial trouble from the loss of fare-paying commuters to telework. In addition, an overextended construction budget also has prompted Maryland lawmakers to propose increasing annual subsidies under a plan contingent on Virginia doing the same.

Metro is hoping to soften a financial blow it expects this summer, when more than $2 billion of federal coronavirus aid begins to evaporate. The proposals are the latest ideas from transit officials and lawmakers as the region recovers from a pandemic that has altered commutes and crushed Metro's finances.

At the heart of the effort, the agency has a detailed plan to develop Metro's remaining properties and aims to coordinate with local governments to create development that helps the transit system.

The plan's goals are to increase Metro ridership, generate new revenue from fares and leases, and help the region grow businesses and housing that generate tax revenue. The increased development would ultimately help Metro in the form of annual subsidies that jurisdictions provide.

New transit users from the proposed developments in the plan are projected to take 5 million to 9 million new Metro trips each year, and pay $20 million to $40 million in fares, according to agency estimates.

Added revenue from leases would generate $50 million for Metro each year, and the development would contribute about $340 million in annual tax revenue to local and state jurisdictions, Metro officials said.

The influx of revenue, while still years away, would bring more balance to the transit line's income sources, according to the Post.

The transit system's biggest moneymaker, Metrorail, lost about 80 percent of its riders during the pandemic, although ridership has rebounded recently alongside the reopening of more downtown office buildings. Daily weekday rail trips in late March were still 65 percent lower, on average, than before the pandemic.

Land prices are escalating across a region in need of more housing, prompting developers to increasingly try to partner with Metro, owner of more than 550 buildable acres near 40 rail stations and with the potential for 31 million sq. ft. of development and 26,000 homes. More than half of the sites are in Maryland, six are in northern Virginia and the others are in the District of Columbia.

The locations also are coveted among developers because of their transit access, which tends to command higher prices.

Since 1975, Metro has built 55 projects and 17 million sq. ft. at 30 stations through public-private development agreements, in the process generating $194 million each year in state and local tax revenue.

"As we emerge from the pandemic, joint development presents a real win-win opportunity for Metro and the region," Liz Price, Metro's vice president for real estate, said in a statement.

Angie Rogers, deputy chief administrative officer of Maryland's Prince George's Economic Development Corporation (EDC), said her office is working on plans to increase development along the Blue Line corridor from D.C. to downtown Largo. It also is teaming with Metro to preserve and expand housing, commercial stores and offices at Blue, Orange and Green Line stations.

Congress saved Metro from drastic service cuts over the past two years with three rounds of federal stimulus money, an infusion of $2.4 billion that made up for revenue losses. Metro, with an annual operating budget of about $2 billion, is projecting to have $151 million of federal aid remaining for the fiscal year that begins July 1, 2023, leaving the agency to make up the rest.

The Post reported that the transit system is projecting a funding gap in mid-2023 of more than $300 million.

For years, the transit system had been behind on repairs and upgrades, contributing to track fires, breakdowns and delays, but that had started to change recently, boosted by Maryland, D.C. and Virginia deciding in 2018 to devote dedicated funding for Metro's needs, amounting to $500 million annually.

The money helped Metro catch up on repairs, including the replacement of 20 worn and weathered outdoor platforms and an overhaul of station escalators, the Washington newspaper reported. The dearth of passengers during the pandemic also allowed Metro to expedite projects. Metro's annual capital building program over 10 years has grown from $700 million a year to more than $1.8 billion this year.

The transit system issues bonds to get money upfront, using the dedicated revenue from jurisdictions to pay for them.

The Post learned that in 2023, the transit system's proposed capital budget is $2.4 billion, which is funded using the same bond method. But in a few years, Metro will not be able to issue new bonds because its dedicated funding will only be enough to pay back outstanding bonds.

Aware of Metro's funding shortfall, elected leaders across the region — aided by the Metropolitan Washington Council of Governments — have been discussing funding increases.

The Maryland legislature recently passed a provision that would automatically increase the state's annual funding to Metro by three percent, contingent upon Virginia doing the same. The District of Columbia has already committed to the increase, the Post learned.

Del. Marc A. Korman (D-Montgomery), who sponsored the Maryland House's version of the bill, said the measure would allow Metro to use bonds for capital projects well into the future. He serves as chair of his state's House Appropriations subcommittee on transportation and the environment.

The bill also is supported by the Washington Suburban Transit Commission (WSTC), which represents Prince George's and Montgomery counties.

"Without adequate funding, [Metro] will not be able to close out its backlog of projects, much less make the improvements being requested by riders and jurisdictions across the national capital region," the commission wrote in a letter of support to the House subcommittee in March.

Across the Potomac, though, Virginia has not yet tried to pass a similar bill.

Sen. George L. Barker (D-Fairfax), who is leading the state's effort, said he wants to build support for any proposal with the administration of Republican Gov. Glenn Youngkin, who took office less than two months before Virginia's legislative session ended.

"There was no time to really work with the new secretary of transportation," Barker told the Washington newspaper. "So, I'll work on that next year."

A 3 percent annual increase in the dedicated Metro funding would generate an additional bondable $15 million in its first year, $30 million in the second year and $46 million in the third year. That amount is still a fraction of what Metro's capital needs will be, according to the WSTC.