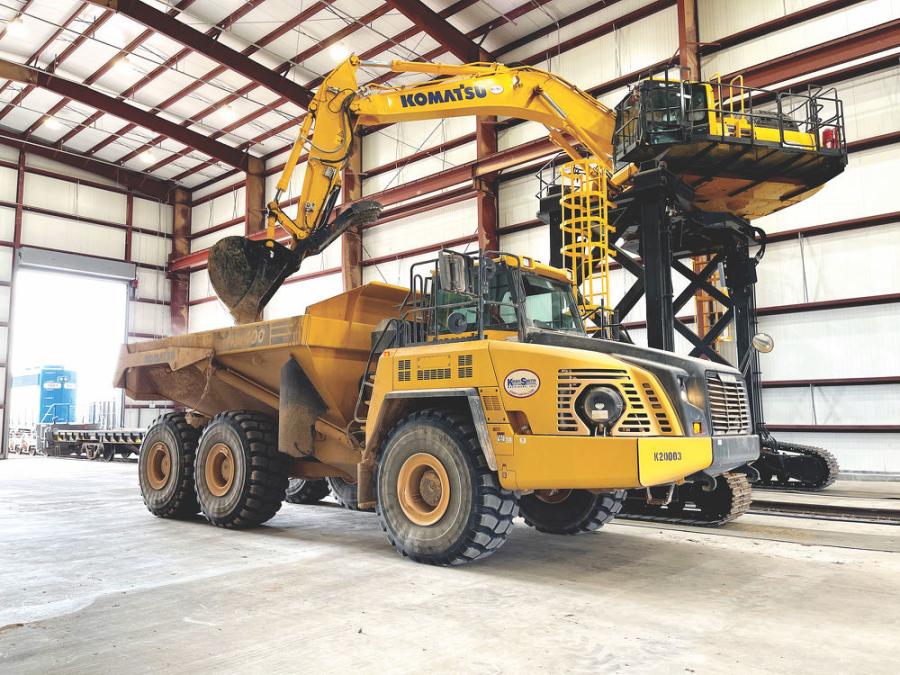 Several decades ago, the state of Texas began searching for a long-term solution to storing low-level radioactive waste (LLRW) from a variety of sources, including medical facilities and the decommissioning of nuclear power plants. After a long, complex process to license and construct a site to deal with the hazardous materials, Waste Control Specialists LLC (WCS) began accepting its initial shipments in 2012.

WCS was the first facility engineered, constructed and licensed to dispose of LLRW in the United States after the Low-Level Radioactive Waste Policy Act was passed by Congress in 1980. Nearly 10 years after loads began coming in, WCS is accepting more volume than ever at its approximately 1,400-acre permitted site in Andrews County, Texas.

"We handle nuclear and radiological waste, as well as NORM (naturally occurring radioactive material) waste," said Jay Britten, vice president and site general manager. "Waste Control Specialists considers itself a one-stop shop that can treat and dispose of hazardous materials. We are able to take in anything from nuclear reactor vessels to bulk debris to contaminated soil."

The location originally centered around two cells known as the Texas Compact Waste Facility and the Federal Waste Facility, both of which are still in use. The former opened first and has remained dedicated to Class A, B and C LLRW. It is 9 million cu. Ft. in size with nearly 4 million curies (units of radioactivity) of waste disposal space. The cell is dedicated to materials taken in from commercial, institutional, non-governmental sources under an agreement with Texas and other states.

The Federal Waste Facility is larger and focused on Class A, B and C low-level and mixed low-level waste. It has up to 26 million cu. Ft. of space and nearly 6 million curies of disposal area. It houses radioactive waste and equipment used in federal facilities such as Cold War lab remediation cleanups, including materials from decommissioning and demolition like debris, contaminated soils and heat exchangers. 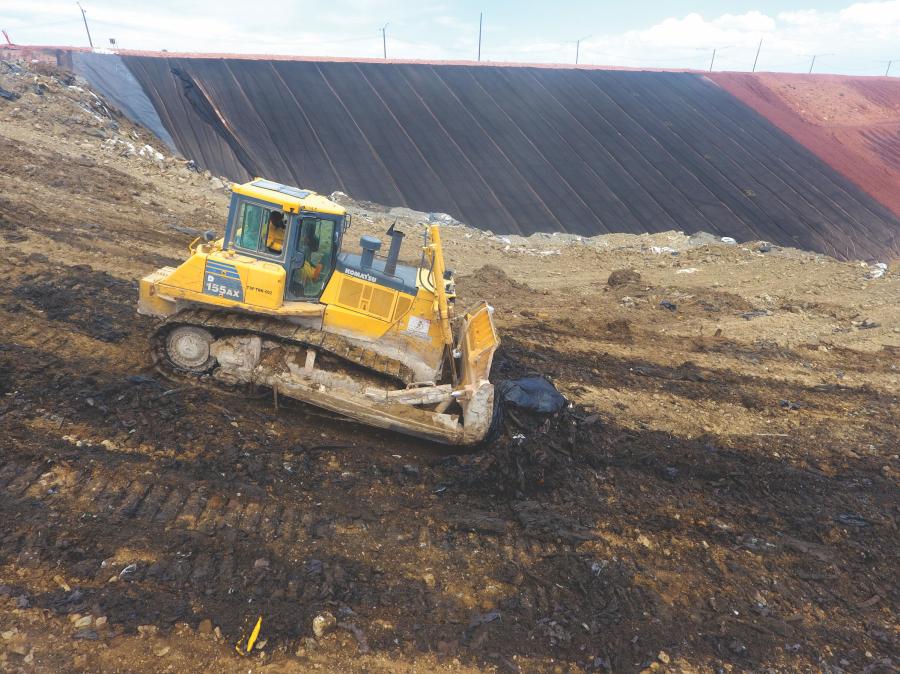 Much of the waste that goes into the Federal Waste Facility needs to be treated before it can be disposed. WCS does that on-site by putting it into a mixing pan with materials such as Portland cement, fly ash and ferrous sulfate to immobilize the radioactive and chemical properties before they go into the landfill. A shredder reduces the size of larger items.

Workers place incoming materials in cylindrical and rectangular concrete canisters, depending on their properties. Voids in the canisters are filled with flowable grout, and concrete lids are placed on top. Backfilling between the canisters is done as needed to ensure long-term landfill stability.

WCS emphasizes that its facilities are housed on an ideal site for several reasons. Among them is an abundance of quality red-bed clay that is less permeable than concrete. Staff uses the clay as cover material as it fills cells. Additional advantages include low annual rain fall and the absence of aquifers, so the chance of groundwater contamination is low.

Both cells are more than 100-ft. deep and were excavated to that depth before a 3-ft. layer of compacted clay was put down. On top of that is a layer of granular cover and 1 ft. of reinforced concrete with 2 ft. of protective cover. In total, the liner at the bottom of the cells has a thickness of 7 ft.

The location also now houses a Byproduct Facility, which is a 16-acre landfill with an engineered liner, support structures and a buffer zone. It has about 1 million cubic yards of capacity.

"What we take in is obviously extremely hazardous, and we are dedicated to handling it with the most safe and secure measures," said Britten. "Our location is a much better alternative to leaving those materials at their source. We have the expertise and experience to do that, and as the volume has grown, so have we to accommodate it — both in terms of capacity and personnel. About 110 of the approximately 140 Waste Control Specialists staff members work here."

At the beginning, materials were brought in by trucks. That's still the case, but during the past decade, an increasingly large percentage started coming in by railcar. To handle materials more efficiently and productively, WCS added specialty machines such as its new customized Komatsu PC360LC-11 straddle carrier. The machine is mounted on tracks and "stilts" that put it at a height of approximately 35 ft.

"We bought it in order to expand the business with bulk offloads," stated Operations Supervisor Jeremy Proffitt. "Each railcar is the equivalent of six truckloads of waste. The PC360 straddle carrier gives us the ability to unload a railcar in about 12 minutes, which is generally the equivalent of 260,000 pounds of material. It's faster than dealing with six separate trucks, and it's more efficient than using equipment such as a rail tipper, which has a higher purchase cost." 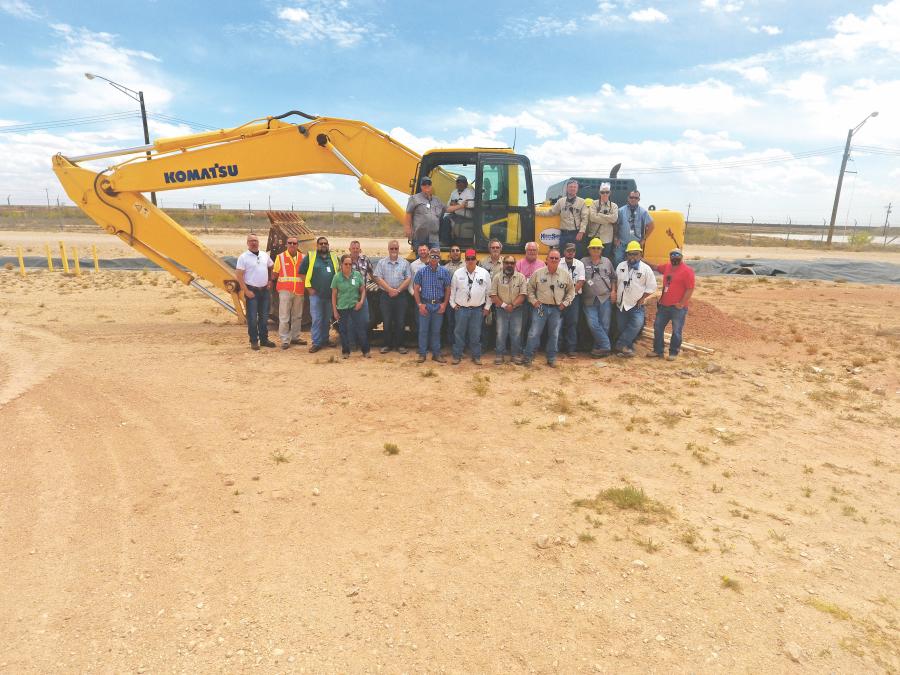 WCS worked closely with Kirby-Smith Machinery Inc. (KSM) and Territory Manager Kevin Demel, who contacted another vendor to design and install the "stilts" and tracks for the base PC360LC-11. The tracks sit on either side of the rails, and cars are pushed underneath of it for unloading. A thumb was put on the bucket to better handle debris.

"The height gives operators excellent visibility during unloading, which increases their efficiency," said Proffitt. "Because we knew it was going to be effective, we designed a building with a concrete floor and rails to house it. The machine and rails are on one side of the building, and our trucks come in on the other side to be loaded, then they move the material out to the cells. It's a very productive process."

WCS uses HM400 articulated trucks, which are among a fleet of Komatsu equipment the company owns. Some of the original machines used to excavate and construct the cells remain, including PC200LC and PC450LC excavators and D51 dozers. WCS has since added a D155AX dozer for pushing large quantities of debris. KSM and Demel helped with those acquisitions.

"This facility is not standard in any way, even in the nuclear waste disposal industry. That means we need some unique solutions, and Kevin and Kirby-Smith have delivered from the very beginning," stated Maintenance Manager Carl Coggin. "For instance, in addition to the straddle carrier itself, we needed a fire suppression system for it. They helped with that. Their expertise and support are unmatched. In addition to quality equipment, that's another major reason we use Komatsu."

WCS expanded one landfill last year, and Britten said it's close to the point where further expansion is needed.

"We have plenty of room for it, as we're only using a small percentage of the 14,000 total acres that we are located on," Britten pointed out. "We're licensed to expand, so we are planning for it and have everything we need in place when the time comes."

For now, Waste Control Specialists will continue to improve practices with an eye toward even greater efficiency, according to Britten.

"We have become better at utilizing our resources," he added. "That's something that we want to continue, so that we seek ways to serve the industry as well as our community. Our facility remains a great alternative to leaving hazardous waste on-site. We are proud of what we have accomplished and look to build on that."