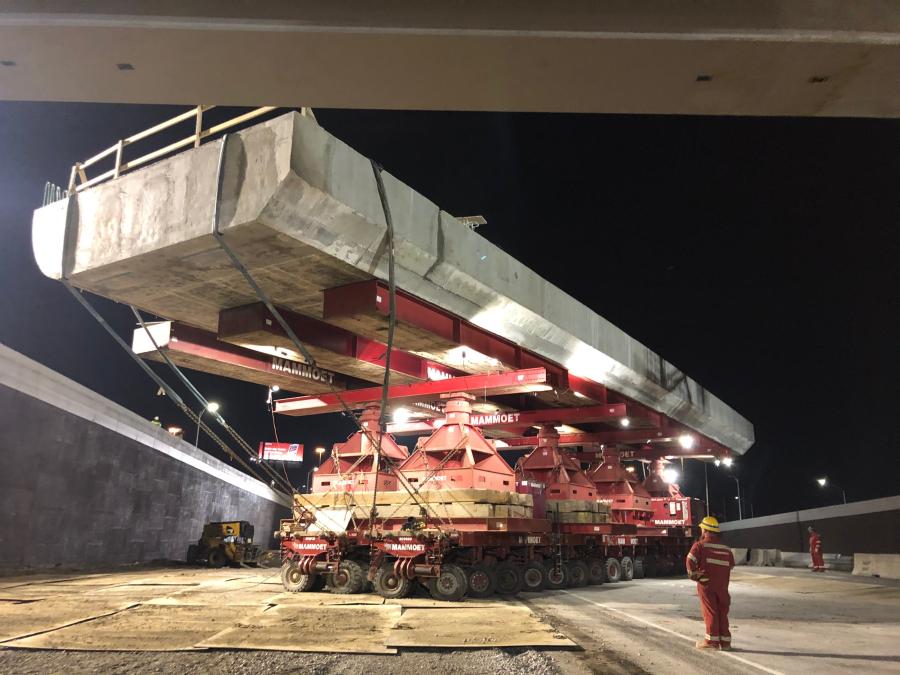 Webber Construction currently is working to deliver the Signature Bridge Project, a 500-ft. long north-south structure that spans State Highway 114 in the city of Irving, and is a nearly $40 million job. (Webber Construction photo)

Webber LLC will deliver the Texas Department of Transportation's (TxDOT) $39.5 million Signature Bridge project, a 500-ft. long north-south structure that spans State Highway 114 in the city of Irving that will connect the old Texas Stadium, the former home of the Dallas Cowboys (south side) with a large development area – 78 acres – on the north side.

The cable-stayed bridge project is funded by federal (20 percent) and state (80 percent) funds, with Irving contributing $10 million for the aesthetics. It will have two through lanes and a left turn lane on each side, along with bicycle lanes and pedestrian walkways on both sides. The contract also includes frontage road improvements. Substantial completion was achieved over the last few months.

The bridge — designed by Bridgefarmer & Associates Inc. — will serve as a connector for commuters and a grand entrance into the city for the tens of thousands of drivers who pass through this section of SH 114 daily. Two pedestrian bridges, now demolished, provided access to Texas Stadium from the parking lot. 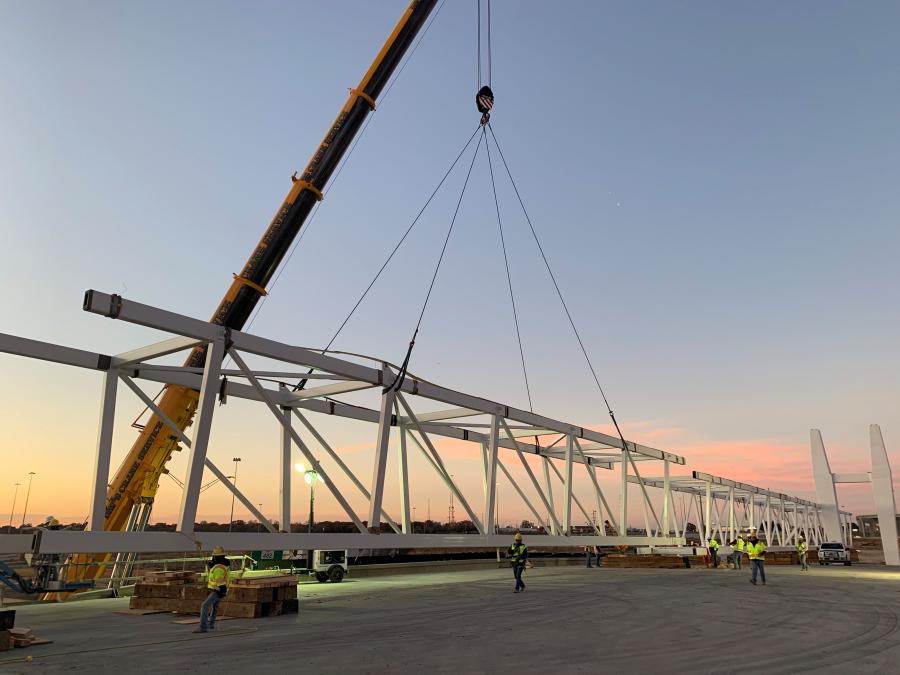 "Bridge 1A consists of U-beams," said Shahriar Azad, BridgeFarmer's project manager of the Signature Bridge Project. "The outside pedestrian bridges, 1B and 1C with oval and parabolic shapes, are specially designed concrete structures with post-tensioning cables. Separating the bridges helped in designing and constructing the main bridge. Other unique features include the tall pylons with a truss and cable system that were designed to minimally interact with the main vehicular bridge. The pylons are located within the MSE select fill embankment in between the main bridge [1A, 1B, and 1C] and bridges over the frontage roads [2 and 3] in the approaching ramp-cross street intersection areas. This simplifies the design and construction."

The bridge is being constructed via a design-bid-build method.

David Springob, the city of Irving's engineering manager of the Department of Capital Improvement Programs, stressed the importance of the aesthetics, which include lighting elements for the truss and canopies over the pedestrian walkways.

"It's not a true suspension bridge, but it has aesthetics of one," he said. "The walkways have a fence with decorative mustangs on the face and canopies on the roof that allow for the sun to come through, but also provide shade as you walk across the bridge. We put irrigation on top of the bridge for vegetation. This is an iconic bridge for the city and it makes Irving look like a destination." 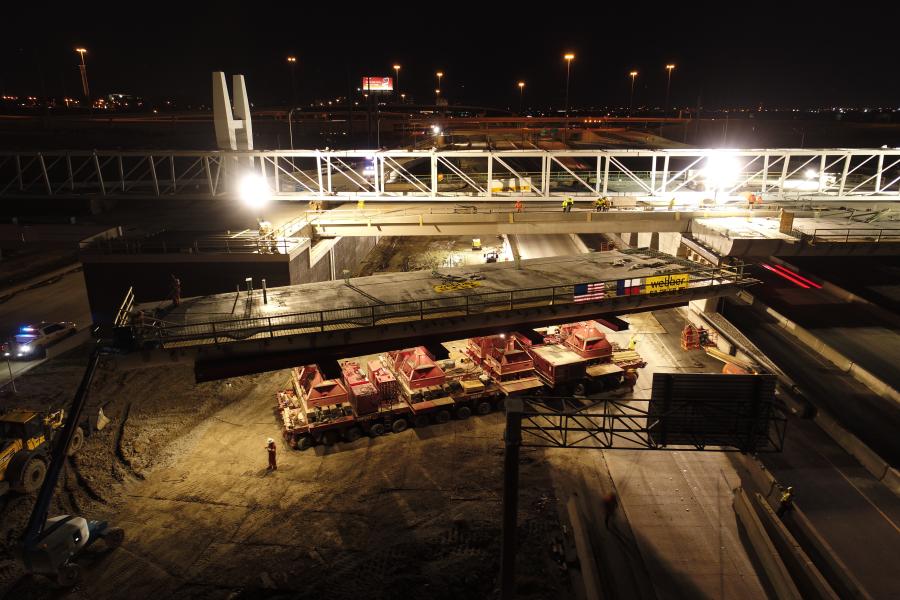 "The city wants their citizens to be proud of this bridge and it envisioned one with unique aesthetic features where citizens can gather from the nearby planned residential/commercial facilities and meet before or after riding the DART trains on the sidewalks of the bridge," said Azad. "TxDOT and Bridgefarmer engineers worked collaboratively with the city to develop the unique design. Bridge 3 was designed with the options to add escalator and/or an elevator from the bridge sidewalk to the DART station platform under the bridge."

With the future DART station and bus transfer facility, the bridge will be part of an intermodal facility.

"The sidewalks on the both sides are very wide with a maximum width of 32 feet," said Azad. "The sidewalk geometry is unique; with an appearance of oval shape from the top and half parabolic shape from the side of the bridge. Both the sidewalks are covered with canopies consisting of Kalwal insulated translucent fiberglass sandwich panel system for protection against Texas summer heat."

The sidewalks are designed with colored textured concrete, along with planter boxes and an irrigation system. 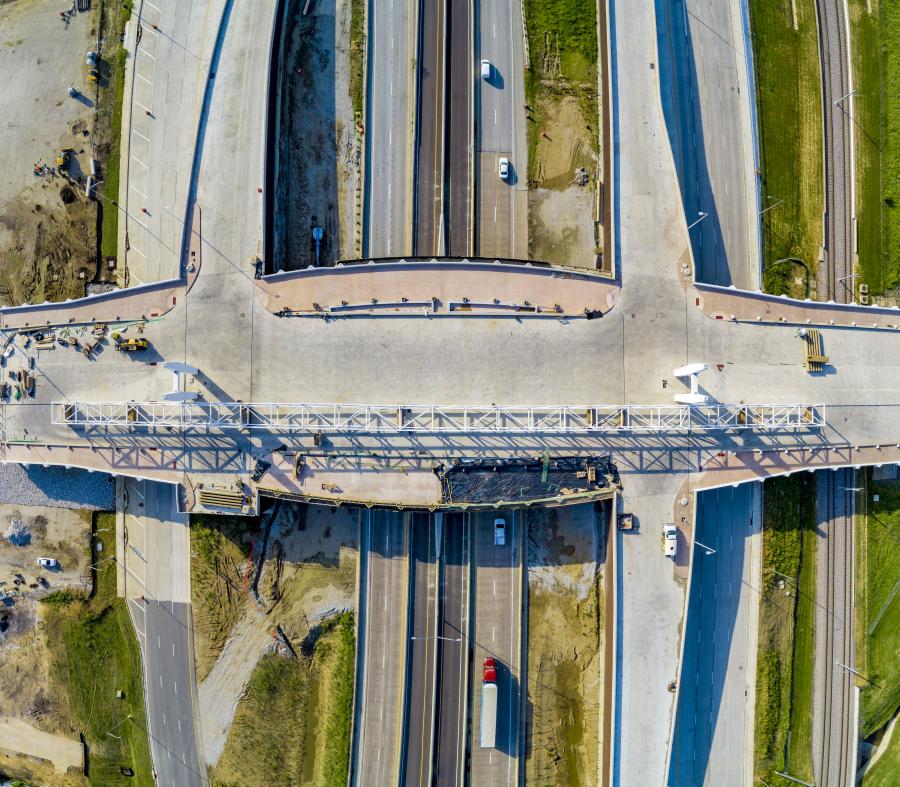 "The perimeter wall of the planter boxes are designed to be wide so they can be used as benches if someone wants to rest on the bridge," said Azad. "The bridge also was designed with unique LED illumination fixtures that can be programmed to change colors. It will appear as one wide bridge to the travelling motorists and pedestrians, but the main bridge crossing was designed as three separate bridges 1A, 1B, and 1 C with one-inch open joint in between them due to complexity associated with the function and constructability of the structure.

He added that BridgeFarmer also designed the water and sewer lines for the city, which are adjacent to the bridge and will be connected to the DART station (on the northwest side of the bridge).

Traffic was impacted with night and weekend lane closures as the work progressed.

Crews currently are installing the canopies over the walkways on each side of the bridge. The fence on the bridge has been installed and the ornamental Irving Mustangs have been fabricated, which will be installed on fences.

The truss currently is setting on the bridge deck, and sometime this summer it will be hoisted by a crane and set on top of the lower pylons already set. The upper steel pylons, which are being fabricated, will be set on top of the lower pylons. Bridge cables will connect the upper pylons to the truss and canopies – this will be done after all the components all in place. 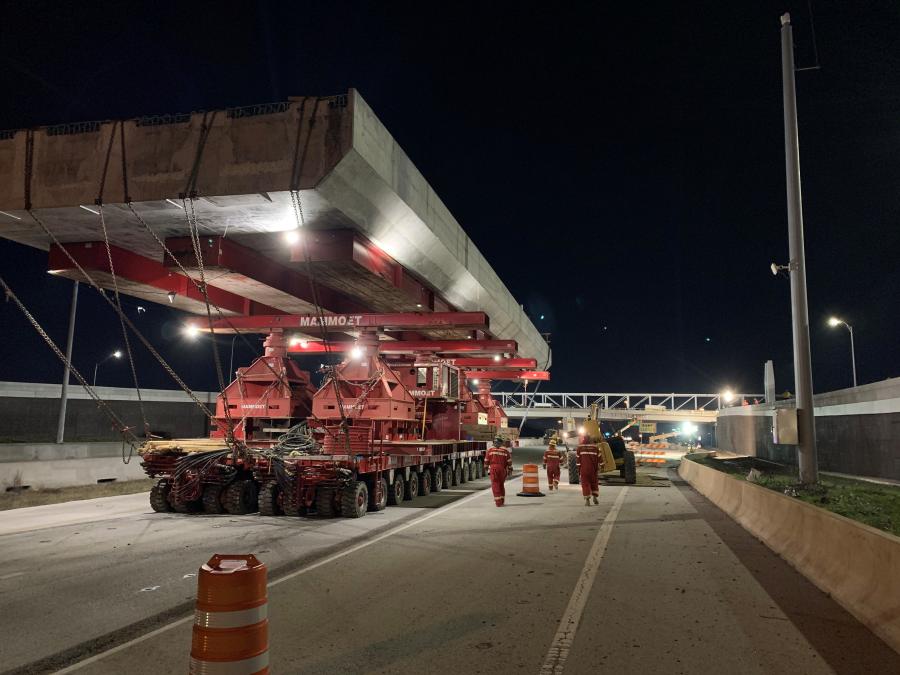 "A major part of the construction took place over the existing SH 114 TEXpress managed lanes," said TxDOT. "Those express lanes, which feature tolls to help manage congestion in the lanes, provide a reliable alternative to traveling to and from downtown Dallas and DFW Airport. Construction of the bridge caps over the TEXpress lanes was redesigned to allow the TEXpress lanes to remain open underneath. That led to some schedule impacts. The project is now expected to be complete in October."

TxDOT added that it has had a longstanding relationship with the city.

"We have been working together for years to bring improvements to the area. Development, connectivity and accessibility sum up the goals of this project. In partnering with the city, we are constructing a bridge will serve as a catalyst for the development of the area. It will be accessible to motorists, pedestrians and public transit.

"The bridge will bring economic growth and development to the area by attracting developers," added TxDOT. "Serving as a gateway to Irving, it will allow for easy access across the freeway. This project is unique because the city will have bragging rights with its very own signature bridge. The aesthetic features, funded by the city, will incorporate elements to resemble the old Texas Stadium. TxDOT is pleased to work with the city of Irving to complete this highly anticipated project." CEG