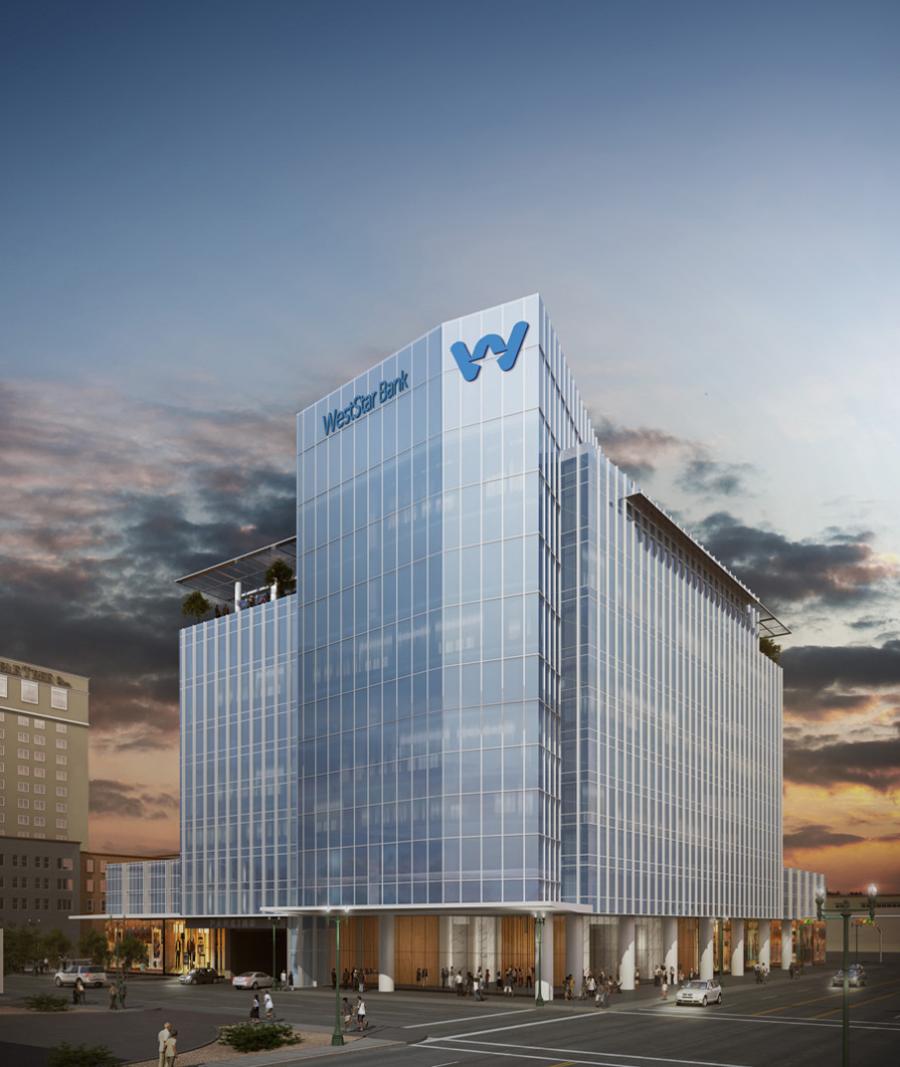 For the first time in nearly 40 years, a major commercial office building is on the drawing board for downtown El Paso.

For the first time in nearly 40 years, a major commercial office building is on the drawing board for downtown El Paso. WestStar Bank announced this fall that it will build the 14-level WestStar Tower at 601 N. Mesa Street, just across the street from its current headquarters.

“Fourteen stories in downtown El Paso is big,” said Richard Dayoub, president and CEO of the Greater El Paso Chamber of Commerce. “In Dallas, maybe not so much. In Chicago, maybe not so much. But here, it's big, and it's important not because it is a tower, but because it will be the first new really significant size office building downtown. More important than anything else, it's a new crown jewel for our downtown revitalization.”

The revitalization is part of the city of El Paso's “20 in 20 Strategic Plan,” which includes eight strategic goals, among them the goal to create an environment conducive to strong sustainable economic development.

Plans for the development include eight levels of office space with additional levels for on-site parking with approximately 600 parking spaces, ground-level retail areas and park-like green space available for use by the public. WestStar's investment in the project is about $70,000,000, according to a resolution from the El Paso City Council, which also voted to approve tax incentives for the project.

WestStar will occupy three floors of the building and will also have a commercial bank operation on the ground floor. The bank will bring an additional 35 employees to downtown El Paso. In total, WestStar Bank and its affiliates will have approximately 180 employees working in the new location.

“We are excited to be closer to the start of the construction phase of a first-class office building in downtown El Paso,” said L. Frederick “Rick” Francis, chairman and CEO of WestStar Bank. “WestStar Bank has always had a presence downtown and we are proud to continue that legacy and put our name on this project.”

The Tower will be constructed on property purchased by Hunt Companies in 2014. The land was purchased at the time as a part of an exploratory effort by Hunt with an eye toward potentially relocating its offices downtown, as well as identifying a suitable site for other office and retail use, according to the press release.

Hunt Companies will move its headquarters from Mesa Street on the city's west side to the new facility in downtown El Paso. The office building will serve as the corporate headquarters for Hunt, occupying three floors of the building.

“We are very pleased that the city has given their full support to this unique downtown project,” said Josh Hunt, executive vice president of Hunt Companies. “We hope to wrap up our discussions with the county in the very near future and receive their approval as well. We are proud to lead this project as part of our efforts to develop and revitalize the heart of our city. Our hope is that the new WestStar Tower will serve as a catalyst for continued growth in the downtown El Paso. It is our intent to create a premier downtown location.”

The current WestStar building also will attract a new tenant, Dayoub said. “It's a beautiful building with its own parking garage and surface parking, so someone else will no doubt want to take that building on.”

Completion is scheduled for 2020, however, Dayoub noted that construction could begin as early as 2018, making it possible for an earlier completion date.