What Caused the Seattle Crane Collapse? Experts Weigh In 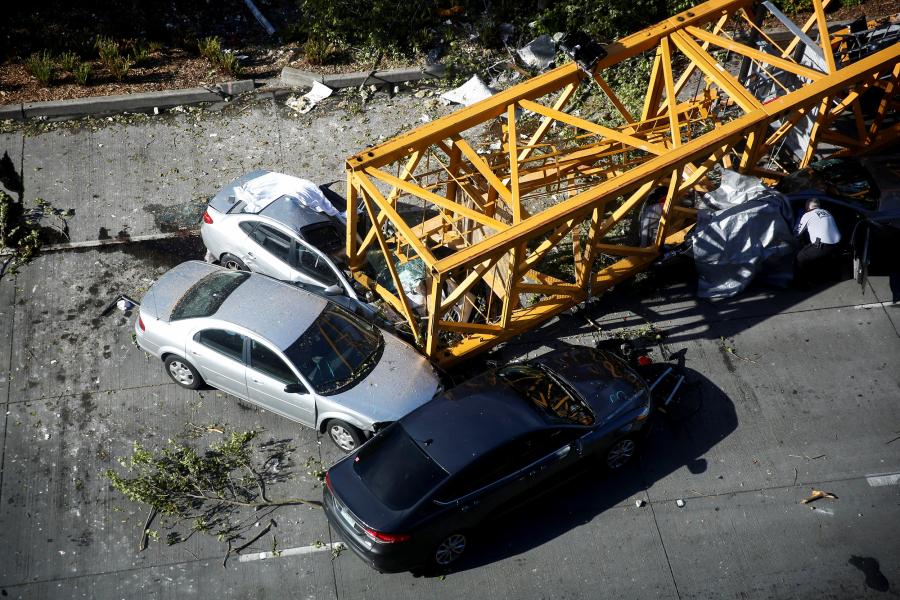 The crane’s mast fell over on the afternoon of April 27, as workers were taking it apart. Sections landed on top of the new Google building where it had been used and on traffic below, striking six vehicles.

SEATTLE (AP) — Human error may have caused a crane collapse that killed four people and injured four others over the weekend, experts said April 28.

Based on videos of the collapse, they said it appears workers who were disassembling the construction crane had prematurely removed pins securing the sections of the crane's mast to each other, and that could explain why the crane toppled in relatively minor wind gusts.

"The reason this tower fell over is ironworkers and the people working on it did not follow the manufacturer's instructions for disassembling the crane," said crane accident investigator Tom Barth. "If the pins had been in, that crane would not have fallen over."

The crane's mast fell over on the afternoon of April 27, as workers were taking it apart. Sections landed on top of the new Google building where it had been used and on traffic below, striking six vehicles. Two ironworkers on the crane were killed, as were two people in cars — a retired city employee and a college freshman. Four others were injured.

Barth, who has been a tower crane operator, inspector and accident investigator for 38 years, said the only safe way to disassemble a tower crane is to do it by sections.

The videos, including one from a dash camera in a car approaching as the crane fell, appear to show the sections of the tower crane separating cleanly, indicating the pins had likely been removed early, said Dave Kwass, a trial attorney who handles crane accident lawsuits.

"Where I would be starting as an investigator is getting a better grasp of what these two ironworkers who tragically were killed may have done in removing the pins," Kwass said. "What I'm seeing is a crane that looks as though the pins were popped all the way down to the pedestal section."

Kwass also suggested that the shifting weight of the workers at the top of the mast as they tried to grab the wind-swayed hook and line from the other crane might have helped push the mast over.

Early pin removal was blamed after a tower crane mast collapsed during disassembly in Dallas in 2012, killing two workers. Terry McGettigan, a tower crane specialist in Seattle, declined to comment on the April 27 crash, but he wrote a paper on the Dallas collapse warning about the danger of taking shortcuts by loosening or removing the bolts in advance.

The Iron Workers Union Local 29 based in Portland, Ore., and Local 86, in Seattle, who represented the workers who died, did not respond to requests for comment on April 28.

Washington Department of Labor and Industries inspectors were expected to finish their work at the scene on April 28, said Tim Church, a department spokesman. He said it was too early to speculate on a cause.

"GLY and its sub-contractors involved with this tower crane accident are doing everything we can to investigate the incident," the company said in a written statement. "We are cooperating fully with investigators and assisting the local authorities. At this early stage of the investigation, we have no further details."

The ironworkers who died were identified by their unions as Andrew Yoder, 31, of Washington, and Travis Corbet, 33, of Oregon. Corbet's wife, Samantha Corbet, told Seattle television stations that her husband had served in the U.S. Marine Corps for five years before becoming an ironworker.

They married last year and planned to go on their honeymoon in June.

Also killed were Seattle Pacific University freshman Sarah Wong, 19, and Alan Justad, 71, who retired in 2014 as deputy director of Seattle's Department of Planning and Development.