When Opportunity Knocks, 'The Best May Be Yet to Come' 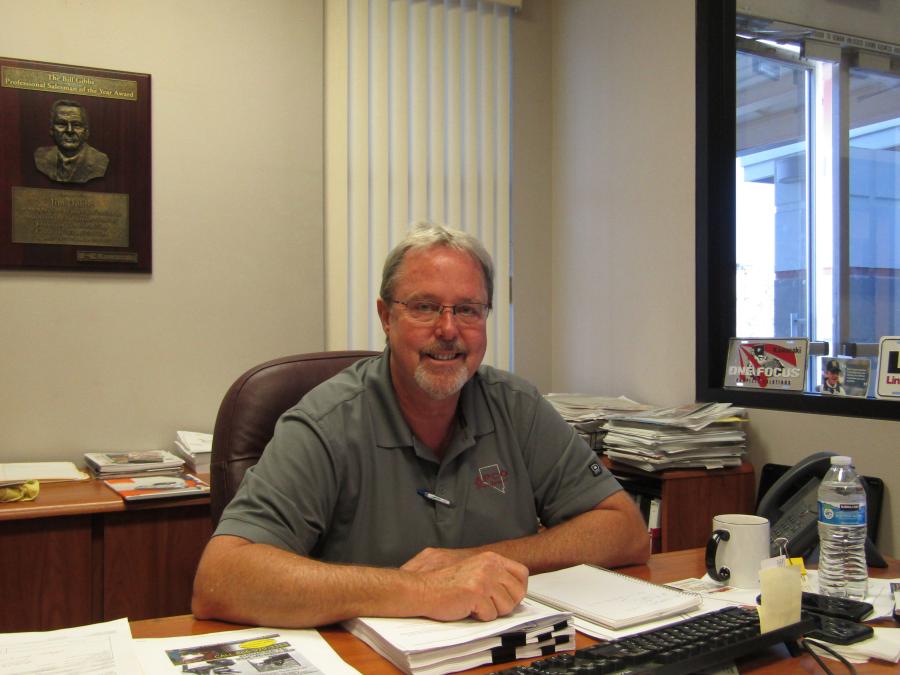 As he looks back on his career, Jim Dobbs’ thoughts are “The best is yet to come.”

Jim Dobbs began his career at the back parts counter of a John Deere Construction Equipment dealership in Fresno, Calif., in 1979. After a year, he was promoted to the front counter.

“Interacting with the customers was one of my favorite parts of the job. I was young. It was a lot of fun” said Dobbs.

Dobbs held his position at this location for two more years until a labor dispute forced the office to close. Gaining more experience, Dobbs then went to work at Kroeger Equipment, a large truck, automotive and agricultural parts house in Fresno for two years.

In October 1983, he was offered the opportunity to work for a new start-up — Cen-Cal Machinery of Fresno. He was hired as a parts person, but for the first four years, turned wrenches in the shop. After 10 to 12 years of developing the parts department, he was promoted to the outside sales division.

“Sales back then were very different than today. We relied on pay phones, pagers and bag phones. Lots more boots on the ground,” Dobbs said.

While continuing to make sales calls and handle his territory, Dobbs was promoted to vice president in 2000. It was during this time, in 2002, he was awarded the prestigious Bill Gibbs award for Professional Salesman of the Year, now commonly referred to as the Hitachi award.

“What an honor. This was one of the highlights of my professional career,” said Dobbs.

In 2005, Dobbs was promoted to president. He remained in this position until 2017 when, after 35 years, an opportunity arose — Garton Tractor in Turlock, Calif., needed a wheel loader specialist.

Dobbs' responsibility at Garton was to move the needle on wheel loaders into the construction market and to assist in improving shares of the dairy industry, all while working with a staff of 36 salesmen.

“Because they excelled in all of their existing lines, to add another product was challenging, but exciting,” he said.

Although Dobbs loved and relished his time there, a new opportunity surfaced in April of 2018 — Apco Equipment of Las Vegas, Nev., made him an offer.

While in Las Vegas for the AED Summit in January, Dobbs was introduced to John Carlino, president of Apco Equipment in Las Vegas.

Carlino reached out to Dobbs in late March.

At first Dobbs was adamantly opposed, “the Strip, the heat, two things I can do without,” he said. “I'm not going to Vegas.”

It was not an easy decision to make. Dobbs truly enjoyed and respected his time with the Garton family and dealership. However, Apco Equipment had two people that were able to persuade him: Greg Lundeen, operations manager of Apco, and Mike Hughes, Apco service manager.

Dobbs had known Lundeen for 20 years and has known Hughes since the late 1980's — first as a customer, then as the service manager of Cen-Cal. He decided to made the trek through the desert to Las Vegas, and started his new position as sales manager on May 1.

What initially impressed Dobbs most about Apco is its history and size.

Apco Equipment boasts more dealer lines than any other dealer in Nevada, and is locally-owned and operated since 1964.

“We are also focusing on association relationships, becoming more involved in local events such as county fairs. With our Kubota line, we can really fill a niche with the smaller farmers and home owners,” said Dobbs.

“We also will be working more on our customer appreciation events, open houses and generally just becoming more active in our local community. We currently host a three-day NASCAR event for our customers, which is a big hit. We would like to do more of that.”

As he thinks back on his career, Dobbs final thoughts are, “The best is yet to come.”