Why Are Bridges Green? The Story Starts In Oregon 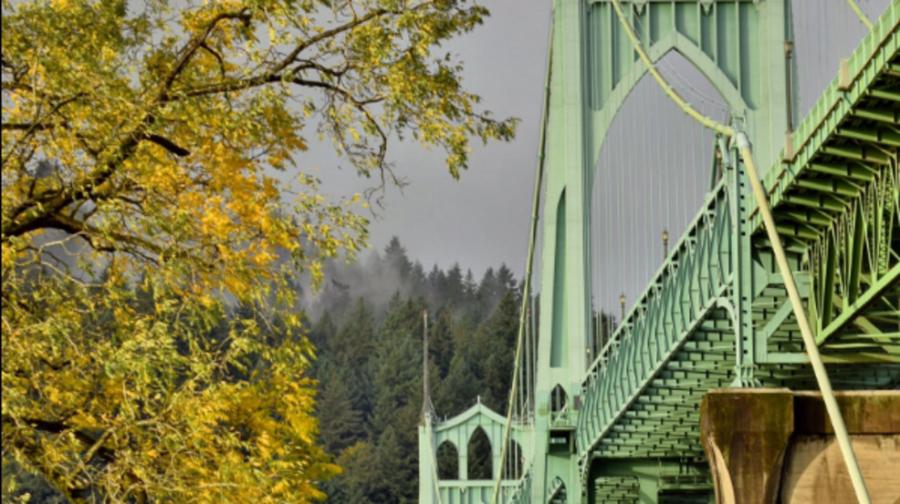 PORTLAND, Ore. (AP) – Drive across Oregon and it's hard not to notice that many of the state's steel bridges – from the foggy coast to high desert – are the same shade of sage green. It's so ubiquitous that the paint's manufacturer calls it "ODOT Green" after Oregon's Department of Transportation.

But ODOT Green – a color that started a national phenomenon – is a color that almost didn't happen: Oregon's first green-painted bridge, the St. Johns, was initially supposed to be striped black and yellow like a bumblebee.

It wasn't. But green bridges began there, with the St. Johns and the two men who competed to build it: David B. Steinman and Conde McCullough.

Both were bridge engineers who believed firmly in the aesthetic possibilities of bridges, and both were self-made men who rose from poverty to national prominence. But that's where the similarities end.

Steinman saw himself as a visionary poet and artist. McCullough was a quiet intellectual whose curiosity led him to pursue a law degree by attending night classes.

Steinman was a prolific author who alienated his colleagues by publishing self-promoting autobiographical articles in engineering journals.

McCullough, on the other hand, wrote practical books on engineering and economics. Much of what we know about him comes from oral history interviews done by ODOT's senior historian, Robert Hadlow. Hadlow describes McCullough as a clever man with a quiet sense of humor, who he'd "enjoy a conversation with."

The two men submitted their contracts in 1928 for the St. Johns Bridge, which would span the Willamette River and connect Northeast and Northwest Portland. The selection process was controversial: Some wanted the bridge to be designed by a local like McCullough. Others wanted someone with a national reputation.

Ultimately, a committee chose Steinman. He was inspired by the hills and evergreens that surrounded Portland and wanted the bridge to match. The suspension-style that he ultimately chose included soaring Gothic arches topped with copper spires, which were intended to complement the "evergreen spires" on the trees around it. Steinman considered the bridge to be a work of art.

But representatives for the nearby airfield were worried they'd crash into it. They wanted it painted black with yellow stripes.

Steinman wouldn't have it, and neither would the Multnomah County commission. On March 17, 1931 (St. Patrick's Day, appropriately) it was announced that the St Johns bridge would be painted the redundantly-named "verde green." The decision to do so was fairly radical: at the time, almost all bridges were painted black or grey. There may have only been one other colorful bridge in the country at the time – the Steinman-designed Mount Hope Bridge in Rhode Island, which was also green.

Steinman loved the St. Johns bridge, and said it was his favorite. "My best poem," he told his biographer William Ratigan, "a prayer in steel."

While the St. Johns bridge was the state's first green-painted bridge, it's not where ODOT Green started. That specific shade of green, it seems, was McCullough's doing, and first appeared in 1933 on the John McLoughlin bridge.

"From an engineering perspective, it really is an elegant bridge," Hadlow said. And the American Institute for Steel Construction recognized that – there's a plaque on the bridge declaring it "the most beautiful bridge of its class."

When it was announced that McCullough's bridge won, though, there was a small problem: the bridge was painted black. But the image McCullough's illustrator submitted to the contest showed the bridge tinted green. McCullough had to make sure that the bridge matched the illustration before he could receive the award.

Thankfully, McCullough was "the boss of the bridge unit at the time," according to Ray Bottenberg, ODOT's bridge preservation managing engineer, "so he probably just said 'go buy some green paint' and sent a crew out there."

By the time the plaque arrived, the bridge was what we now know as ODOT Green. The John McLoughlin Bridge is still that color today.

McCullough went on to construct dozens more steel bridges across the state. And all were painted that color.

His most famous bridges line the Oregon Coast. He envisioned Highway 101 – which follows the shore and is dotted with scenic overlooks and waysides – as a necklace of pearls. He wanted his bridges to serve as the clasps that complemented the state's natural beauty without upstaging it.

Today, those ODOT Green bridges are iconic. The Yaquina Bay Bridge is widely considered to be one of McCullough's best and is an Oregon landmark.

"It's well executed, and it fits the location so well," Hadlow said.

McCullough clearly thought that the color complemented the entire state, and not just the water-logged region west of the Cascades. The Crooked River High Bridge in Central Oregon's Jefferson County, among others, wears the color as well.

McCullough spread the ODOT Green across Oregon, while Steinman spread other greens across the country. All of his future bridges would be one or more shades of green. Steinman would even go so far as to claim that he invented the concept of painting bridges with colors.

"The success of my innovation is attested by its widespread adoption by various State Highway Departments, also by its adoption for parkway spans and public authority bridges in New York City," Steinman later wrote.

It's unclear, though, to what extent Steinman can truly take credit for the popularity of green bridges. He and McCullough were contemporaries and their bridges were studied closely and copied by their colleagues.

And it's McCullough's color that reigns supreme today: Technically, the paint is "federal standard 595 color 24272," but nobody calls it that. From New Hampshire to Washington and even Canada, uncoated steel structures are painted ODOT Green. And as of its most recent paint job, the St. Johns Bridge is, too (pour one out for "verde green").

ODOT still coats old steel structures with this paint. "I'm not sure there's a rational reason for using the color, other than that we've always done it that way," Bottenberg said. "No one's really questioned that they were green. I don't think it's more complicated than that."

ODOT Green is well-suited to the Northwest: its special coating cures best in damp weather. In a place like Arizona, the paint would never dry.

But the color is noticeably absent on Oregon's newer bridges.

"Nowadays we favor concrete bridges, because you don't have to paint them” Bottenberg said. And when new steel bridges are constructed, they're made out of weathering steel, which develops a protective red-rust coating and doesn't need to be painted.

Paint, according to Bottenberg, is as much for maintenance as aesthetics. And if it's not necessary, it's not used.

But Bottenberg, for one, is fond of ODOT Green. "It kind of fits Oregon's mentality."