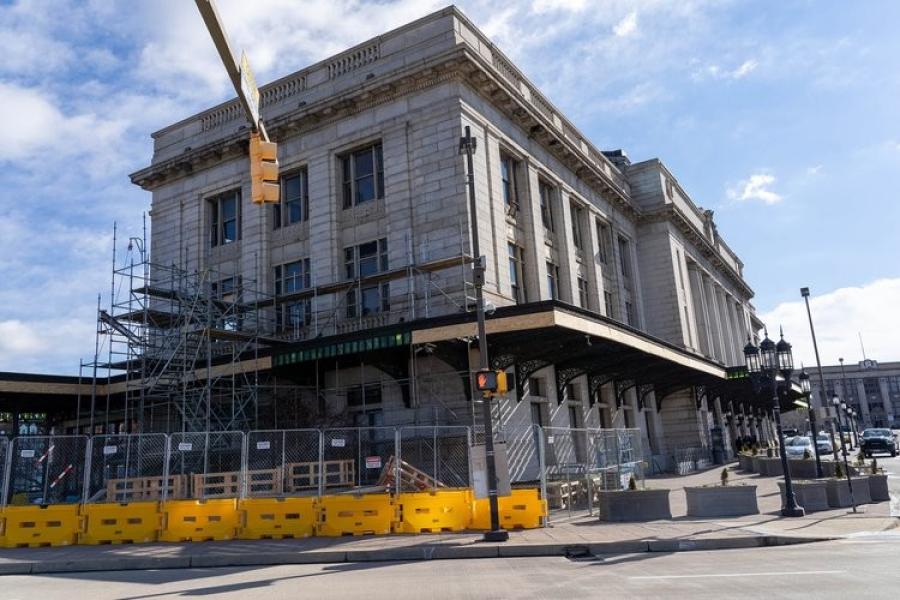 The overall purpose of the Penn Station project is to get the building, opened in 1911, restored to where it becomes a Station North standout community treasure. (Amtrak/Lawrence Green photo)

Baltimore's Pennsylvania Station is now wrapped in scaffolding and a dark filmy safety material that makes the building pop out.

It also is open for business and in the first six months of a planned transformation and expansion designed to make this landmark more of a neighborhood anchor than it already is.

Workers recently began repointing its stone walls and checking for structural stress that the historic structure may have suffered during its lengthy existence, the Baltimore Sun reported June 11.

"We're finding more mortar damage than we could have foreseen," Timothy Pula, a community development official of Beatty Development Group in Baltimore, told the newspaper. "Up on the scaffolding, you can see the wear and tear you don't see from the street. It's 111 years old and the wear is understandable. The mortar joints need repointing."

The Baltimore office of Wohlsen Construction is tackling the building stones and stripping paint from the station's massive windows on the southern facade looking toward the Jones Falls Expressway. When that side is finished, workers will move on to the north facing Lanvale Street flank.

"It is fascinating how the builders physically put it all together," said Pula, who is the great grandson of Baltimore railroad station architect E. Francis Baldwin. "We are also taking the exterior canopies apart and redoing the glass in them. Up on the fourth floor, when you look through the decorative stone balustrades, the building has an almost Parisian feel."

While the exterior stone and windows required work, Pula added, the roof and the three stained-glass skylights proved to be in better shape.

A Station That Blends the Old and the New

The overall purpose of the Penn Station project is to get the building, opened in 1911, restored to where it becomes a Station North standout community treasure, the Sun noted. Officials behind the effort believe that a relighted and proud-looking rail terminal stands to make a statement about what is to come — a major station concourse expansion over the train tracks and a new addition on its Lanvale Street parking lot.

In time, a campus of new apartment and office buildings could rise on land owned by Amtrak or on parking lots in the Station North community.

But that is in the future.

For now, Pula told the Sun that Penn Station's interior, the one that commuters and travelers see, is being reworked. The present ticket windows will be changed, and restrooms and other spaces will be housed in temporary kiosks while the work progresses. The upper floors, unused for decades, will become offices.

The idea is to keep the station looking like it did in 1911, while still bringing aspects of it into the 21st century. For instance, work is also under way for new platforms for planned high-speed train service, and one set of the original platforms is currently being refurbished.

The present construction timetable calls for the work on the station and the additions over the railroad tracks toward Lanvale Street to continue well into 2023.

"Working around a busy and fully operating railroad is not easy," Pula said. "And taking functions like an operating baggage storage area and moving it are like moving complicated pieces around. It's really like a Rubik's cube."

Over the years, many noteworthy personalities have passed through the station, including Babe Ruth, Clark Gable, the Duke and Duchess of Windsor, and former President Jimmy Carter, to name a few.

Penn Station also has a body double, in Scranton, Pa. That city's 1907-built Delaware, Lackawanna & Western terminal in Pennsylvania's coal mining region could be a sibling to Baltimore's station. Each was designed by the same hand in noted architect Kenneth Murchison.

"Many older residents rubbed their eyes and asked themselves if they were not in another city," an article in the now defunct Baltimore American newspaper commented at the time.

Occasionally, someone would suggest that Baltimore's Penn Station needed to be replaced.

"That a new [station] is needed, is, of course, sheer nonsense," penned H.L. Mencken, the famous early 20th century journalist, satirist and Baltimore native. "I can recall only three or four occasions when it was uncomfortably crowded, and then it was not crowded by passengers, but by idlers horning in to gape at [President Calvin] Coolidge, or Jack Dempsey, or the Prince of Wales or some other magnifico."