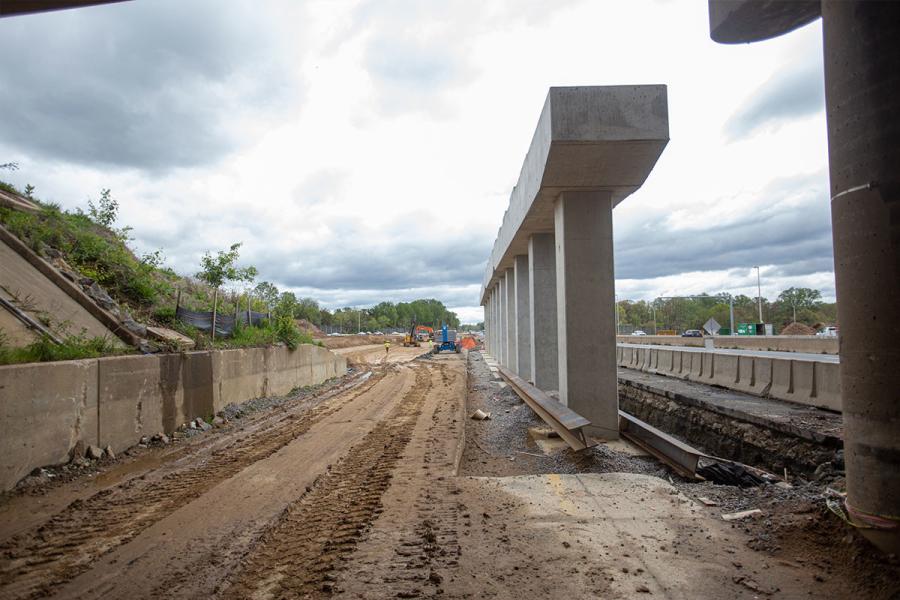 The coronavirus pandemic brought challenges to the widening of Virginia's Interstate 66 but also helped to accelerate it. Lower traffic counts over the summer helped to keep the massive toll lane project through the heart of northern Virginia on schedule.

Three years after construction began, the Virginia Department of Transportation (VDOT) recently said work is on pace for the late-2022 opening of high-occupancy toll (HOT) lanes stretching from University Boulevard in Gainesville to the Capital Beltway.

The multibillion-dollar project will deliver the latest addition to the region's growing network of express lanes — with more than 60 mi. of such lanes in Northern Virginia — while improvements to interchanges, ramps and transit operations will provide relief to the traffic-choked corridor, officials said.

Work on the project, which ramped up in the spring when traffic volumes plummeted because of the pandemic, has yielded milestones this fall, including improvements to traffic flow at the VA Rt. 28 interchange, newly paved lanes and the opening of new ramps and bridges. In October, almost $70 million worth of work was completed, said Susan Shaw, VDOT's director of megaprojects.

"The amount of work [this year] has been truly phenomenal," she said.

Early next year, traffic will shift to the outer lanes of I-66 as crews ramp up construction of the express lanes within the inner lanes of the highway. Approximately 1,700 workers are on the project to meet the target. The expansion of I-66 outside the Beltway is among Virginia's largest and most expensive transportation undertakings — with an investment of about $3.7 billion. The project will add two HOT lanes in each direction, which will connect with 10 miles of rush-hour, peak-direction toll lanes that opened in December 2017 between the Beltway and the D.C. line.

Three general-purpose lanes will remain in each direction, while improvements will include new and expanded transit service, more park-and-ride lots and median space reserved for future rail service.

The project requires work at 12 interchanges, 63 bridges and overpasses, and more than 11 miles of new bike trails. The job also will require more than 3 million tons of asphalt and 57 million pounds of steel.

Most of the work since construction began in late 2017 has stayed outside existing highway lanes, from utility relocation, clearing and grubbing to heavy construction at major interchanges, ramps, and bridges. Approximately 2.2 million sq. ft. of sound wall is being erected, and new general-purpose lanes are being paved outside the highway's existing lanes.

Traffic will soon shift to those new lanes along the entire 22.5 mi. to make way for the construction of express lanes on the inside lanes of the highway. That transition already has happened in some stretches in Prince William County.

"Our work will focus on the inside, on building the express lanes and the ramp connections to the express lanes," said Nancy H. Smith, a spokesperson of contracting firm FAM Construction, a joint venture of the Spanish firm Ferrovial Agroman, and Allan Myers, based in Worcester, Pa.

Project officials said they took advantage of lower traffic volumes during the pandemic to add lane closures around-the-clock, allowing paving work to move ahead of schedule. Traffic volumes dropped 40 percent to 60 percent in the spring, when VDOT allowed more flexibility in work hours, approving extended times for lane closures. Traffic has since rebounded to about 90 percent of pre-pandemic levels.

Some of the paving scheduled for summer 2021 was completed in 2020, Shaw said, adding that it is too early to know whether that will speed up the overall project timeline. Work at interchanges will continue through the duration of the project, officials said. Metro's summer-long shutdown on a part of the Orange Line allowed crews to work near the rail line at the Beltway interchange. That included the installation of bridge beams for a new ramp from the eastbound I-66 Express Lanes to southbound I-495.

The rebuilding of interchanges, including at the Beltway, Nutley Street and Rt. 123, Rt. 28, and U.S. Highway 29, will improve traffic flow, officials say, while 4,000 new park-and-ride spaces are expected to encourage carpooling and transit use when normal commutes return after the pandemic.

State transportation officials in early December said the project's costs have not changed, but Shaw said there have not been recent conversations with the contractor about the pandemic's effects on the budget. The project is being built through a public-private partnership between the state and I-66 Express Mobility Partners. The consortium of investors financing it will maintain and operate the toll lanes under a 50-year concession.

The project will be a milestone in the state's plan to create a network of more than 90 miles of HOT lanes in Northern Virginia by 2022. New toll lanes also are being built along a 10-mi. stretch of Interstate 95, where toll operator Transurban is extending the reversible 95 Express Lanes to Fredericksburg. Toll lanes also have opened in Northern Virginia within the past decade elsewhere on I-95, as well as on the Beltway, Interstate 395 and on I-66 inside the Beltway.

Regular I-66 commuters will endure more slowdowns before a smoother commute arrives. As the pace of the work increases in the next year, travelers will notice the disruptions.

"There's so much going on," Shaw said, "and so I would just say, when you're driving that corridor, just stay alert."