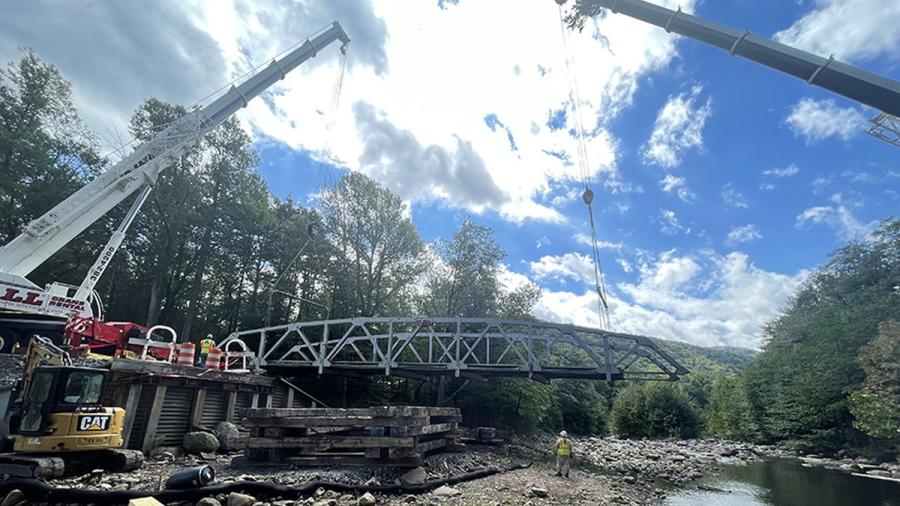 Both the old bridge and the temporary bridge spans Red Creek (a tributary of Dry Fork of Cheat River) along the southern border of the Dolly Sods Wilderness in the Monongahela National Forest. (Photo courtesy of WVDOT)

The last stages of the installation of a temporary replacement for a West Virginia bridge that was closed for safety reasons is planned to begin the first week of October, according to an announcement from the state Department of Transportation (WVDOT).

The old Laneville Bridge was demolished in September and cut into pieces for removal, WDTV in Bridgeport, W. Va., reported Sept. 27.

Located in the rugged Alleghany Mountains within the state's north-central region, the structure gave drivers access to the small unincorporated community of Laneville in Tucker County.

Both the old bridge and the temporary bridge spans Red Creek (a tributary of Dry Fork of Cheat River) along the southern border of the Dolly Sods Wilderness in the Monongahela National Forest.

The roadway and bridge over scenic Red Creek also led motorists to the Red Creek trailhead and is a key connection to the rural counties of Randolph, Grant and Tucker.

The United States Forest Service built and maintained the Laneville Bridge, but it is on a road supported by the state. Safety issues on the structure were discovered during a routine inspection on July 26, causing the bridge to be blocked to traffic.

The West Virginia Department of Highways (DOH), a division of the WVDOT, has agreed to design and construct a permanent structure downstream of the existing span at a later date. The Forest Service intends to pay for the new bridge with funds from the Great American Outdoors Act, state officials told West Virginia Daily News.

In the meantime, an $800,000 contract was awarded to A.L.L. Construction Inc., from nearby Mount Storm, W. Va., to both remove the demolished bridge and complete the replacement project, Forest Service officials said. The federal agency hopes to open the temporary bridge to traffic on Nov. 1.

Now that work has ramped up on the interim bridge, cranes could be seen recently lifting a span of the structure over Red Creek.

DOH warns people driving in the area that heavy construction traffic on Forest Road 19 as well as increased truck traffic on the west side of the bridge of Laneville Road will be ever present until November. Visitor parking will be scarce on the span's west side, and construction equipment will come and go on both sides of the bridge, the West Virginia Daily News reported.

Unfortunately for folks wanting to visit Dolly Sods Wilderness via Laneville to enjoy the October peak leaf season, the U.S. Forest Service is asking them to avoid the construction zone at the Laneville Bridge site. Other drivers may do so only when necessary.