Work Proceeds on $57.2M Science Center at University of Utah 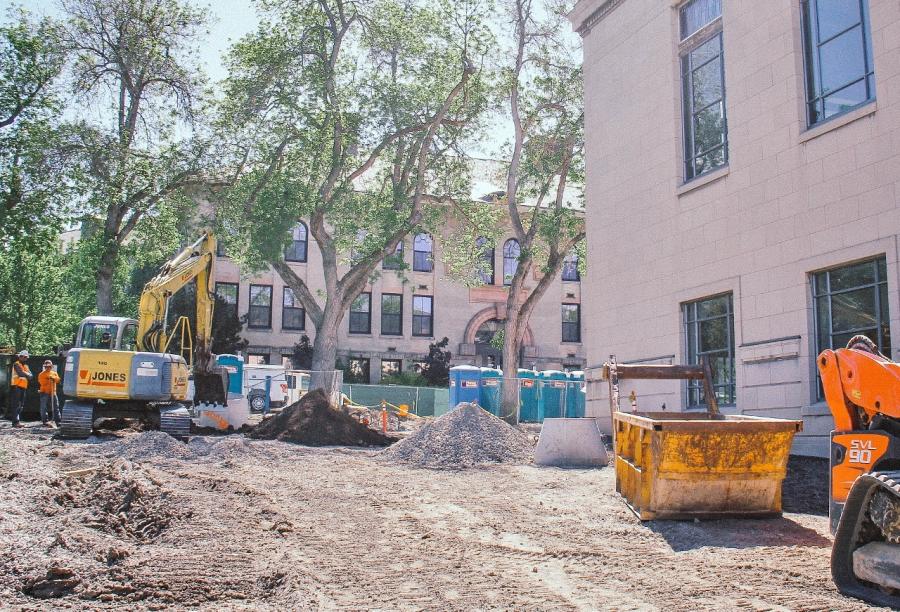 Redevelopment and preservation are part of a $57.2 million, 133,000-sq. ft. Gary and Ann Crocker Science Center project on the campus of the University of Utah in Salt Lake City. (Shireen Ghorbani photo)

Redevelopment and preservation are part of a $57.2 million, 133,000-sq. ft. Gary and Ann Crocker Science Center project on the campus of the University of Utah in Salt Lake City.

The center has four levels overall, with three stories above grade.

The building will house the Center for Cell and Genome Science and Center for Science and Math Education, as well as classrooms and laboratories for interdisciplinary science and math education. It also will provide incubator space.

“Science is the foundation for so many different facets of modern life and the center will provide thousands of students each year with the science and math skills so essential for personal and economic success in the 21st century,” said Gary Crocker, a major Science Center donor, at the groundbreaking ceremony for the project back in late March 2016.

Completion of the new facility is slated for the end of October. Move in will take place in November and courses will be held in the space by the beginning of 2018.

The Crocker Science Center is actually a redevelopment project within the President's Circle. It features new construction along with preservation of an existing structure.

It will convert the existing George Thomas Building into a state-of-the-art teaching and research center.

The George Thomas Building comprises the original U-shaped portion of the existing building. Spanning 71,000 sq. ft., it will receive a seismic upgrade and reconfiguration of spaces with an eye to preserve the exterior, key spaces and components of the interior.

The George Thomas building was constructed in 1933-35 as the university's main library. In 1968, the library had outgrown its space and the building was converted into the Natural History Museum of Utah.

The Natural History Museum of Utah moved to a new facility in 2012, making the historic George Thomas Building available for reuse and repurposing.

Meanwhile, 13,200 sq. ft. of infill space at the south end of the building previously used for book storage, will be demolished and replaced with a 52,500-sq. ft. addition. The addition will hold the Cell and Genome Research Center labs.

The research component of the new building will draw on faculty from biology, chemistry, mathematics and physics and astronomy departments to study the basic machinery of living cells. The educational component will provide undergraduate students abundant laboratory opportunities as well as smaller classrooms and regular interaction with faculty.

In addition, a commercial incubator will bring scientists in the college together with those in the private industry to develop ideas with commercial potential.

Okland Construction of Salt Lake City is contractor. The company constructs buildings for a variety of uses including laboratories, educational facilities including college and university facilities and medical use.

Completed in 2011, the standalone structure is a 62,000-sq. ft. facility that is connected via two sky bridges to the existing Health Sciences Building. The building houses labs and classrooms of various disciplines.

Project manager for the Gary and Ann Crocker Science Center is Michael Beck M.D. at the University of Utah.

Construction Is Well Along

“The project is down to the finishing details,” said Shireen Ghorbani, associate director of communication, planning, design and construction, at the University of Utah. “All walls and concrete are complete.”

About 200 workers from about 20 subcontractors are at the construction site on a daily basis. Over the course of the project, crews will have laid 6,000 cu. yds. of concrete and installed 680 tons of steel.

Workers brought in gravel for access and concrete work. Prior to that, dirt had to be removed from the project site.

Gary and Ann Crocker provided a personal gift of $10 million toward the project. Additional funding came from the state and donations from other benefactors.

Gary Crocker, who has a long history of service to the University of Utah, has served as chairman of the board of Merrimack Pharmaceuticals, a publicly traded cancer therapy drub firm in Boston. He recently received final FDA approval for a novel pancreatic cancer drug.

Ann Crocker, a graduate of the University of Utah, serves as a board member of the Utah Shakespearean Festival and the Sorenson Legacy Foundation.

The project site is on historic Presidents Circle and close to several other historic buildings. All are fully occupied and in use.

“Site safety has been paramount and traffic control plans for pedestrians and vehicles have maintained safe circulation in the area,” Ghorbani said. “Often, large loads or large concrete pours were scheduled in off hours to reduce the impact to the campus community.”

Through the project, the University of Utah has been able to demonstrate a commitment to successfully reuse and repurposed a notable historic building while preserving its historical character. The decorative precast exterior of the original building is being carefully restored and new windows and doors installed that match historic conditions.

Within the interior historic features, including the entry corridor and stairway, wood paneling, marble wall cladding, stainless steel railings and other original materials or engravings are being restored. The 45- by 19- by 28-ft. tall main reading room is a unique vaulted historic space that is being sensitively divided into large lecture halls while preserving the historic volume and detailing.

It will be highly-collaborative space. Efforts were made to integrate teaching space, labs, offices and research areas. The result is that the education component and labs do not feel like two separate buildings.

The new lab area is built primarily of concrete. The new addition was designed to complement the historic structure.

The windows are a unique feature of the update. The new windows retain an historic feel and character, while providing a much-improved and more energy efficient window.

Project upgrades include new electrical and mechanical systems that contribute to an overall improvement in efficiency.

The exterior of the original building has been washed and sealed.

Some cultural items of historical significance were found on the project site that caused significant work reorganization during excavation and recovery of the items.

“Fortunately, the location and timing of this discovery did not delay the overall work,” Ghorbani said.