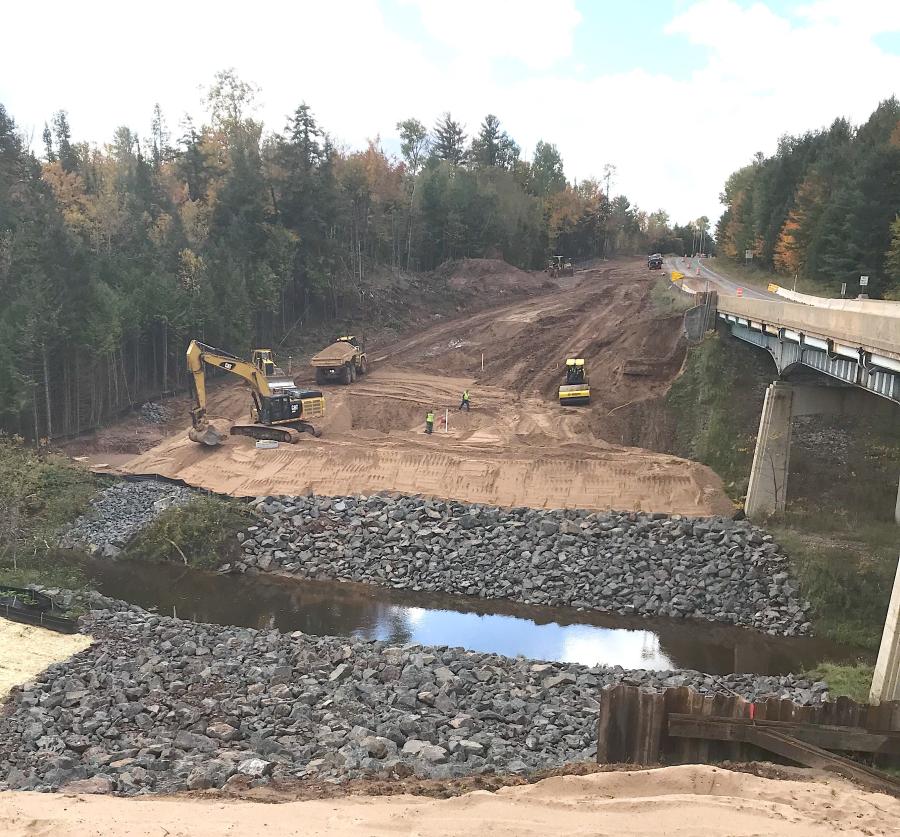 Approximately 300,000 cu. yds. of dirt will be moved for the bridge over the Firesteel River in Michigan. (MDOT photo)

The Michigan Department of Transportation (MDOT) is overseeing a $12.8 million project on M-26 over the east and west branches of the Firesteel River. The work is taking place in Ontonagon County in the western Upper Peninsula.

"The project is needed to replace two bridges that were reaching the end of their useful lifespans," said Dan Weingarten, MDOT communications representative. "They'll be replaced by modern structures that will provide numerous benefits." 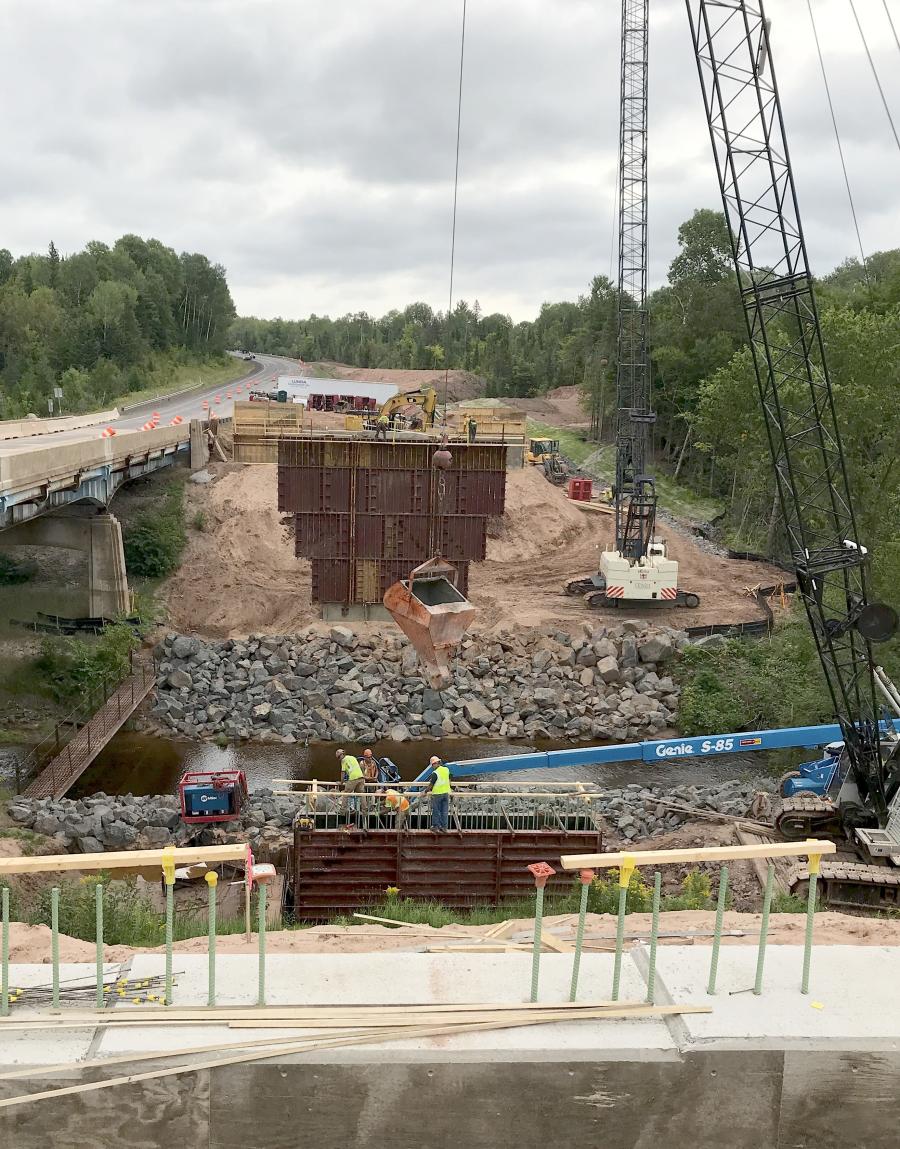 The structures need to be taken down to ensure road safety and function into the future. Safety features include improved geometrics and horizontal and vertical curvature. Work began last spring but was suspended in November for the winter season, with construction resuming this spring.

The undertaking, made possible by state and federal funding, is 45 percent complete. Weingarten said the effect on local drivers in the rural area has not been significant.

"Due to the new bridges being built with a new separate road alignment adjacent to the existing roadway and bridges, the impact to the motoring public has been minimal."

New road alignment and bridges will allow existing bridges to be used during the construction. Because of the excessively long traffic detour that would have been needed to close the highway and replace the bridges in the same location, a new alignment for the bridges was determined to make the most sense.

Using the existing roadway and bridges during construction minimized the impact to motorists, emergency services, schools and businesses. The new road alignment and new bridges allow the old road and bridges to be used by traffic until the new alignment and bridges are open.

Crews have been working on the project typically 10 to 12 hours days, Monday through Friday, with occasional Saturday work. Lunda Construction Company serves as the general contractor.

According to Alan Anderson, construction engineer of MDOT's Ishpeming service center, "The decision to build on a new alignment was made, in part, to alleviate the long detour that would have been required otherwise. Part-width construction was not possible with the old bridges."

As for the biggest challenge, said Anderson, "During design it was found that there were artesian conditions in the groundwater; therefore, foundation pile lengths needed to be limited. Also, a pre-fill of the bearing areas was completed to consolidate the existing ground material and to help increase the bearing of each foundation pile, limiting the depths driven."

"During construction, performing earthwork and grading in mountainous terrain with wet, silty, clay soils posed challenges to properly staging the work to avoid lost work time during or after numerous rain and thunderstorm events," said Jeff Rautiola, assistant construction engineer of MDOT's Ishpeming transportation service center. "Soil erosion control was a critical component of the grading work to install the necessary controls to protect the environment. Numerous water-saturated roadway areas had to be undercut and have geotextile fabric and drain tile installed, and then backfilled with clean sand to ensure a stable roadbed.

"These wet and saturated areas added to the water run-off drained by the ditch lines and storm sewer systems. Unexpected springs in cut slopes required additional work to properly drain and permanently restore the slopes. In addition, access roads for the bridge contractor had to be coordinated with the grading operations to allow simultaneous bridge work." 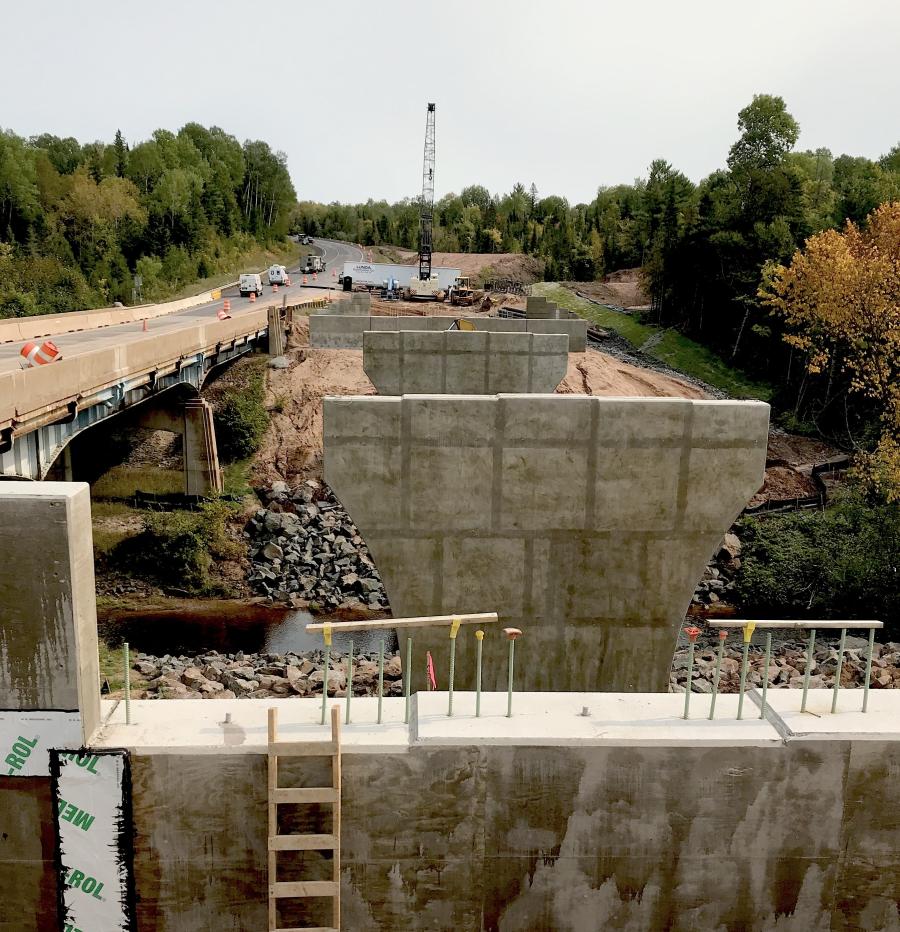 The grading of the new alignment is well under way, with most storm sewer and culverts now installed. The east bridge is now constructed up to the concrete beams with the deck and railing work remaining. The west bridge has not started, except for the roadway approaches.

Crews must complete the remainder of the east and west bridge construction, as well as the realigned roadway grading and paving and restoration. Removal of the existing roadway and bridges also must be finalized.

Approximately 300,000 cu. yds. of dirt will be moved on the project. There have not been any delays related to COVID-19, but construction has been affected by the weather. Thunderstorms and other rainy conditions have added challenges to the grading work.

Prep work involved concrete barriers that were installed to protect and keep traffic away from the existing deteriorated bridge railings.

The most time-consuming part of construction on the project involves the grading and storm sewer systems, due to the extensive depths of cuts and fills on the project.

"These have been addressed with undercutting, placing geotextile separator fabric, draining with underdrain pipe and replacing with clean sand and heavy rock rip-rap in some areas."

Regarding construction milestones, said Rautiola, "The project should be open to traffic on the new road alignment in October of 2021, with the existing bridges to be removed in June of 2022."

He added, "It's very rewarding to build a new roadway and bridges through existing terrain. These structures will serve the public for many years to come and improve roadway use and safety. The new road alignment and bridges will be safer and easier to drive through and have a great panoramic view." CEG