Work Sails Along on $1.47B Bridge Replacement Project 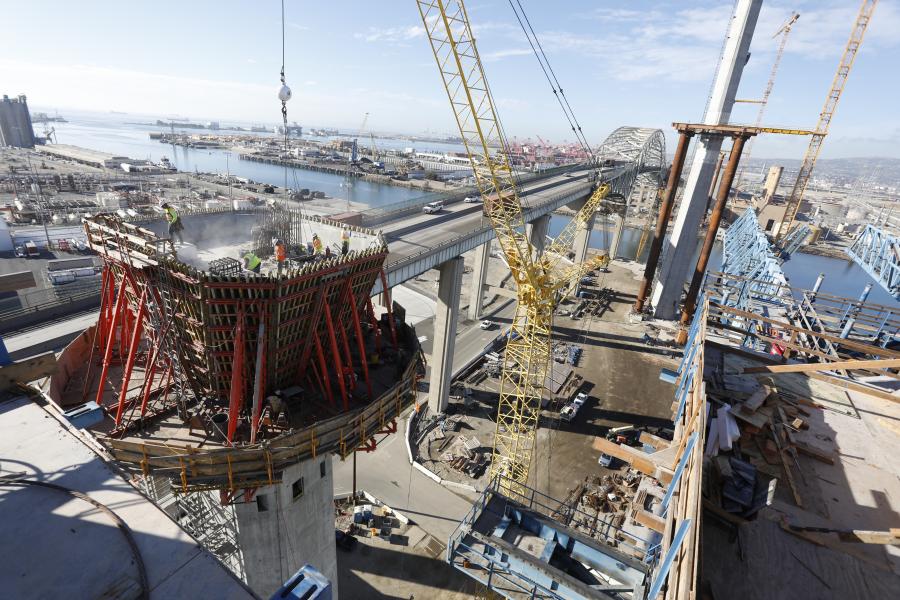 With two towers reaching 515-ft. into the sky, the new Gerald Desmond Bridge will be the second-tallest cable-stayed bridge in the United States.

Concerns about safety, traffic flow and bigger ships drove support for a $1.47 billion project currently under way to replace the aging and deteriorating Gerald Desmond Bridge in the Port of Long Beach, Calif. Cost of the project includes the construction of the new bridge and demolition of the current one. The bridge is a major access point to the port from downtown Long Beach and surrounding communities.

With two towers reaching 515-ft. into the sky, the new bridge will be the second-tallest cable-stayed bridge in the United States. The bridge, with its large price tag, is part of $4.5 billion of improvements at the Port of Long Beach to remain modern, competitive and big-ship ready. And an important focus of the project is safety.

Construction began in 2013 with right-of-way clearance and removal of dozens of oil wells. The digging of cast-in-drilled-hole piles (CIDH piles) began in April 2014. Completion date for the new bridge has now been set for the end of 2019.

The bridge will include emergency lanes on the inner and outer shoulders, as well as a bicycle and pedestrian path. It will accommodate three lanes of traffic on each side, as opposed to the current bridge's two lanes. The emergency lanes will help reduce delays from breakdowns and accidents and give emergency vehicles better access.

The new bridge is being built alongside the existing bridge so that traffic flow can be maintained. In addition, crews will construct a 12-ft. bike and pedestrian walkway structure cantilevered off the south side of the bridge, separate from the travel lanes.

The maximum height of the Bridge Project is 515 ft., which corresponds to the height of its two main towers. The road deck will be 205 ft. over the water, where it crosses the back channel.

The length of the bridge is 8,800 ft., including 2,000 ft. of main span constructed on structural steel and 6,800 ft. of cast-in-place, post-tensioned box girder concrete approach spans. 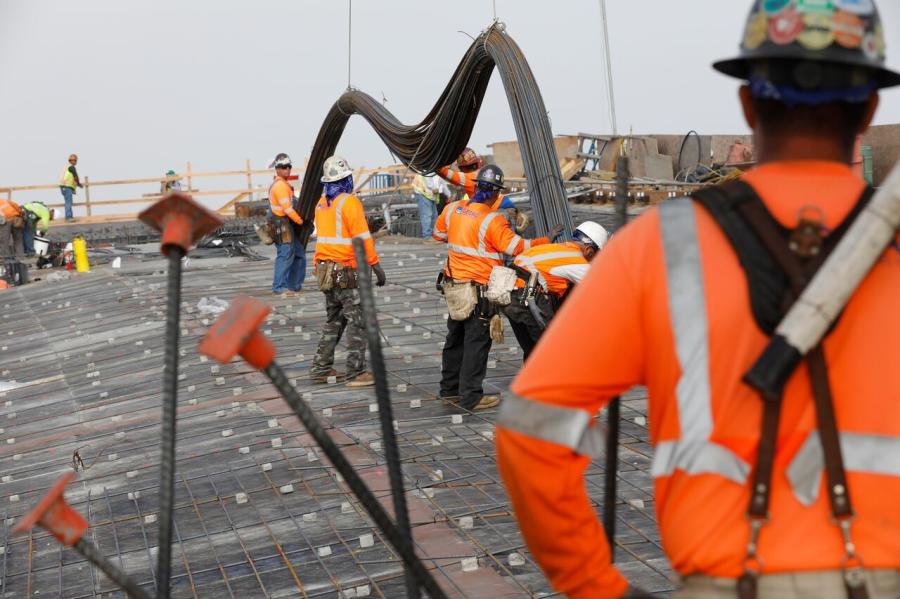 Construction of the bridge is being done both day and night. To advance the construction schedule and minimize traffic impacts, nighttime work is performed regularly. However, most workers report during dayshift hours. About 300 workers are on the job each day.

Over the course of 2018, the initial moveable scaffolding system (called the blue MMS) will work its way to a portion of the approach that is being built using conventional falsework.

The falsework is constructed between the westbound incline approach and Ocean Boulevard, close to Pico Avenue. The falsework is used to construct the parts of the approach that are too close to the ground for the moveable scaffolding system to work on.

On the west side of the project, the conventional falsework portion of the eastbound incline approach is under way.

A variety of heavy equipment is currently in use at the construction site.

In addition to two movable scaffolding systems for the high approaches, crews are using two tower cranes to support work at the main span.

“At one point, there were four oscillators and one rotator for CIDH drilling,” said Lee Peterson, Port of Long Beach spokesman. “However, as drilling nears completion, only one oscillator remains on site.”

Crews also are using a full complement of excavators, loaders and graders for temporary and permanent access road and retaining wall construction. 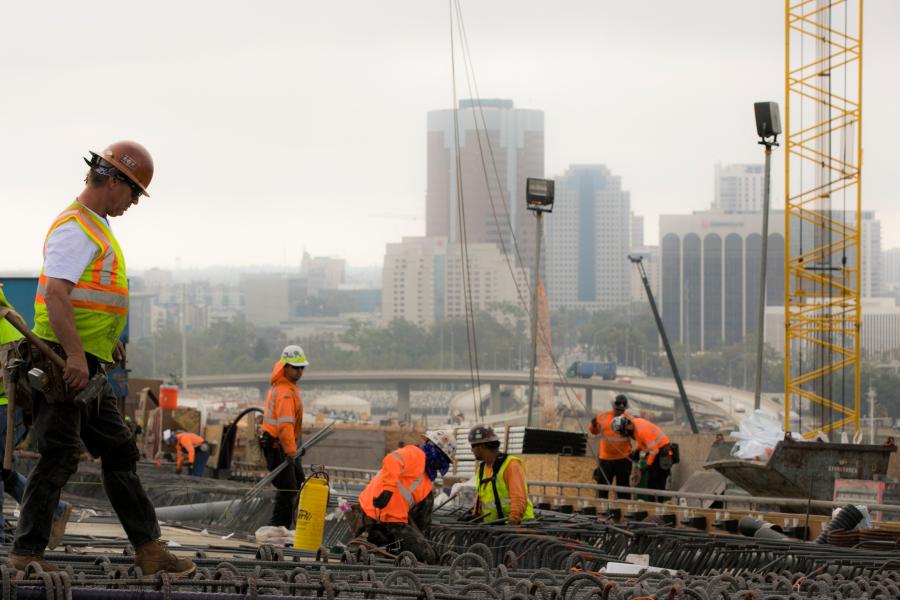 Phases are not part of the construction schedule. As a design-build project, construction occurs on multiple fronts simultaneously. The westbound approaches and two main towers are now complete. Building of the eastbound approaches has begun. That entails two types of construction: use of a 3.1-million-lb. movable scaffolding system (MSS) that replaces traditional falsework at heights where it is neither time or cost effective nor safe to build it as well as traditional falsework at ground level.

Construction of the cable-stayed main span will begin in spring 2018.

Construction plans call for a “Texas U-Turn,” a non-signalized U-turn, to enable the smooth and efficient flow of truck traffic for the Port of Long Beach's Terminal Island tenants from westbound Ocean Boulevard.

It is planned for completion in 2019.

Built in 1968, the existing bridge is what engineers call “functionally obsolete,” meaning that it has reached the end of its lifespan and needs to be replaced.

The current bridge has three lanes on the incline that narrow to two lanes on the decline, when traveling in both directions. There are no shoulders either, meaning a stalled vehicle or accident stands to cause major delays and difficulty clearing.

The new bridge will provide three lanes and a shoulder in both directions, enabling much smoother traffic flow when traffic impacts occur.

It also offers a 5 percent grade, versus the current bridge's 6 percent grade. That will reduce fuel consumption and wear and tear on the trucks that use it.

Additionally, the new bridge will offer state-of-the-art seismic features that will enable a speedier restoration of service after a significant seismic event.

Finally, the new bridge's cable-stayed design and towers will provide an iconic landmark.

“Two challenges caused delays to the construction schedule,” Peterson said. “The first was the clearing of dozens of capped oil wells in the construction area that were left from decades of 'wildcatting' in the 1930s and 1940s. The area is the fifth largest oil-producing field in the U.S. Those wells — most of which were underground — had to be remediated.”

The second challenge was much smaller in nature and involved the steel fabrication of the cable casings on the two main towers. The initial fabrication was redone to meet the contractor's rigorous quality-control standards for safety and longevity.

The new bridge will have a 100-year lifespan.

The Gerald Desmond Bridge Replacement Project is one of 10 “design-build” projects now under way in the state of California. The method combines project design and construction into one contract, as opposed to the standard process done in three stages: design, bid, build.

The Port and its agency partners have also developed a transportation management plan.

Additionally, the Port has assigned a special team whose primary function is to monitor and coordinate the road improvement projects related to the bridge, other traffic projects in the general vicinity, and utility construction projects in or near the new bridge construction site. The Long Beach Police Department and Harbor Patrol will monitor traffic and detours with street patrols and via traffic cameras.

The California Highway Patrol also will conduct enhanced patrols and enforcement near detour routes in their jurisdiction. 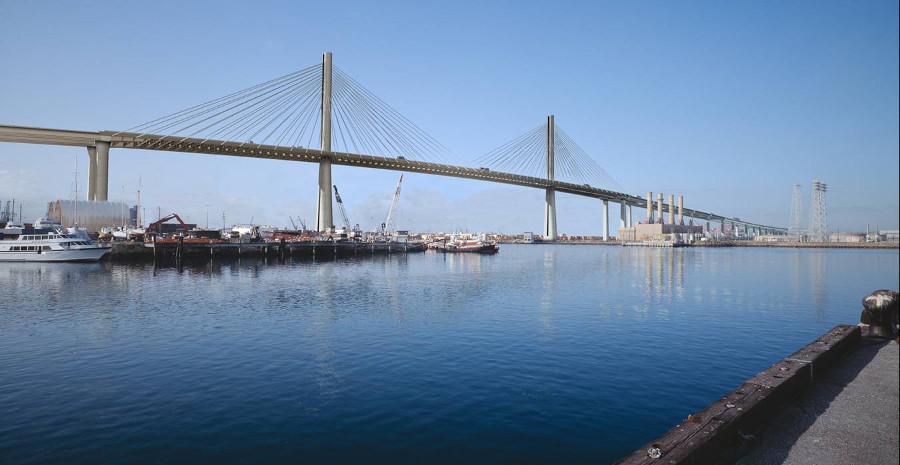 The Gerald Desmond Bridge span originally opened in 1968. It is a major commuting route for the region and an important trade corridor carrying 15 percent of all containerized cargo imported to the United States. The bridge connects Terminal Island, the heart of the port complex, with the Interstate 710 freeway and downtown Long Beach.

The original Gerald Desmond Bridge was a replacement of a pontoon bridge. The roughly 1.5-mi. span, was named after a former city attorney and councilman of the city of Long Beach. The bridge has served the needs of the port and the city for many years. Increasing traffic volumes and the ravages of time have taken a toll on the Gerald Desmond Bridge.

Although it is considered safe for traffic, protective netting catches chunks of concrete that fall from the span.

Replacement of the bridge is expected to provide an economic boost to Long Beach and the general area. The $1.29 billion cost is expected to boost economic activity in Southern California by $2 billion and provide for 3,000 jobs per year for five years.

The new bridge features some impressive dimensions and material amounts: