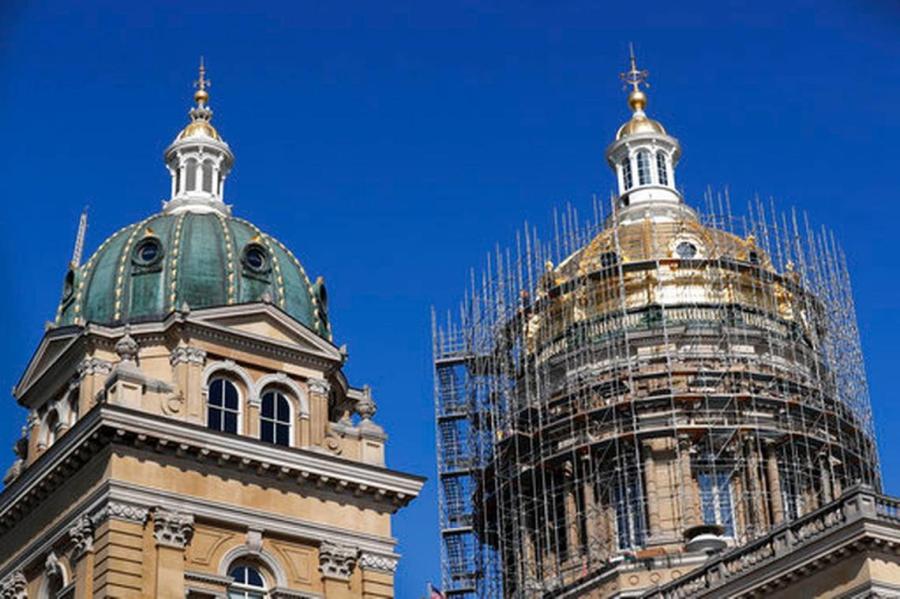 Workers are replacing glass in some windows that circle the structure, repainting window frames, repairing copper window sills and filling in holes in the sandstone that makes up the building's face.


It's not the height or the heat shimmering off the Iowa Capitol's gold-plated dome that bothers Brian Johnson.

It's the potential knock-you-off-the-scaffolding gusts that took some getting used to when Johnson began making repairs to the historic dome, nearly 275 feet above ground on a hill overlooking downtown Des Moines.

"You have to be prepared for the wind," said Johnson, of Des Moines. "It can really surprise you."

Johnson is among about 20 workers scattered on five levels of scaffolding that wrap around Iowa's 131-year-old Capitol during the most visible part of a $10 million, 20-month project to restore the massive dome.

The priority is replacing 15,000 bricks that have deteriorated in the interior dome, but because that task required construction of scaffolding that climbs about 75 feet up from the main structure, maintenance officials decided it was the perfect time to make other repairs to a building that takes a beating from snow, wind and heat. Workers are replacing glass in some windows that circle the structure, repainting window frames, repairing copper window sills and filling in holes in the sandstone that makes up the building's face.

Crews also will install a permanent platform in the dome so workers can better monitor future deterioration.

Officials hope to remove the external scaffolding by November, but work will continue inside the dome.

It's a difficult time to spend so much money to repair the Capitol, given that the state has recently made budget cuts due to lower-than-expected tax revenues, but project manager Scott Allen, of OPN Architects in Des Moines, said officials had little choice.

Allen noted that shards of the brick that make up the dome were regularly peeling off and falling to the floor.

"The top thickness of the brick dome is only 4 inches and you can see portions of the face of the brick where 2 inches has spalled off, so obviously that's something we need to address," Allen said.

Despite the extensive work, the Capitol's appearance won't change, at least not during daylight. At night, the Capitol is expected to be more striking after the installation of a new LED lighting system that will highlight the building and its five domes with a more natural-colored illumination. It will replace a system installed in the 1980s that gives the Capitol in an orange-tinted glow.