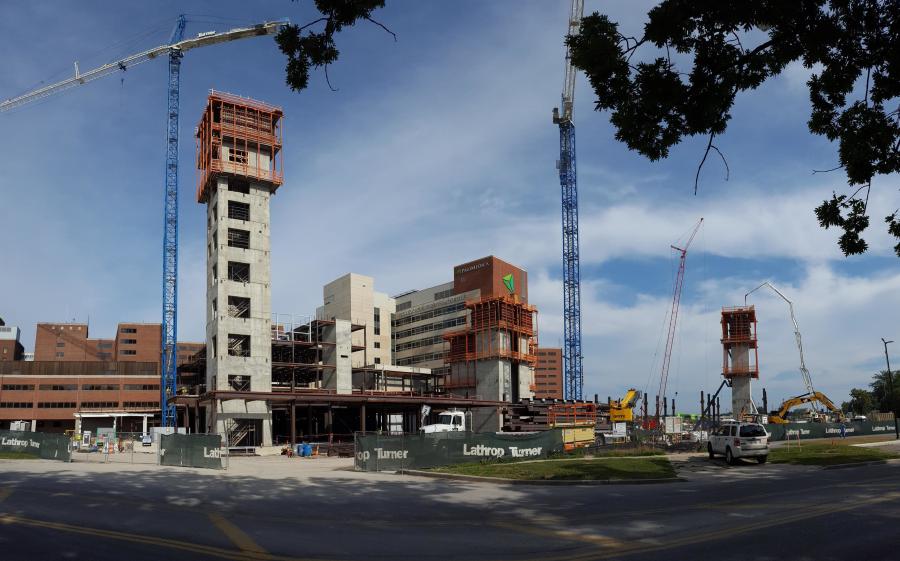 Lathrop Turner is building a $385 million, 13-story, L-shaped 302-bed patient care tower — Generations of Care Tower — on the campus of ProMedica Toledo Hospital. In addition, the Toledo Children's Hospital, a project that broke ground on April 4, 2016 and will be completed in July 2019, with occupation expected by the end of the year.

The tower was designed by the HKS Inc., an architectural firm based in Dallas, Texas.

The new tower will eventually replace an 86-year-old Legacy Tower, and is expected to create nearly 1,000 construction jobs.

Arturo Polizzi, metro region acute care president of ProMedica, said the replacement tower is the most significant project in ProMedica's history and represents the organization's commitment to caring for future generations in northwest Ohio.

“We've been planning this since 2004 when we started the construction on our Renaissance Tower, which opened in early 2008,” said Polizzi. “We worked closely with consultants to determine what our community would need 10, 20, 30 years from now so we can build a facility that is efficient for what you need now but flexible for what you need in the future.”

The tower, which has lower level with a kitchen, cafeteria, and other support services, will have several floors of shell space for future growth. It is connected to a one-level underground garage.

While work on the tower began in the spring of 2016, site prep work started in January with the demolition of several houses and the relocation of roads and utilities.

“We are now erecting the third floor and the fourth floor sequence of steel,” said Craig Zander, Lathrop-Turner's project executive. “The structural steel will top out in late November and the building will be enclosed in second quarter of 2018. Then we'll have 18 months of interior fit out of the building interiors with mechanical, electrical, plumbing systems and interiors along with the new parking garage and surface lots.”

Demolishing the homes went smoothly and part of the relocated ProMedica Parkway was placed above their foundations.

“This provided the room for the new tower,” said Zander. “The campus is expanding to the east and the main thoroughfare needed to be relocated to the east to allow for the expansion. The construction is standard, but it's pretty intense. We've got the one particular discipline — the structural concrete. We have seven concrete cores (shafts) of varying sizes and complexity that are all going in concurrently, which is a challenge for the schedule, manpower, and just keeping things going.

“We have utilized a curtain wall on the building envelope, along with some terracotta panels with a rain screen behind it,” he said. “These are part of the new prefabricated and forward technology systems being installed. There are a lot of windows, but they are all high performance — all pre-glazed and pre-assembled and they'll be set with a tower crane and small articulating arms on the floors. It's not like a conventional stick build where you put the mullion frames in and then come back with the glass — it all goes up together and interlocks with each other to create a high-performance exterior skin.”

The project requires serious coordination with all the subcontractors.

“We brought in several design assist contractors earlier on in the design process,” said Zander. “Their thoughts made their way into the design documents while they were being prepared, which was important for the exterior skin, structure, and MEP systems. We were brought in 2015 to start planning and collaborating with the architect for logistics, scheduling, and budgeting.

“This is not an easy project as the construction is taking place on an existing campus,” he said, “so there's a lot of consideration for existing utilities and infrastructure. The roadway, just the relocation, will be done in four phases over three years. You just can't tear everything up at once — you have to try and be invisible to the client so that they are minimally affected.”

“People are coming to a hospital and not always in the best frame of mind and they are worried about the people they are coming to see,” said Zander, “so they don't want to be affected by the changes in entry points and where they park. We communicate well in terms of the construction impacts and provide that information in advance.”

Lathrop Turner is prefabricating the overhead mechanical systems that run down each corridor of the tower. This is being done off site in a rented warehouse.

“We're assembling these tube-framed racks with all the coordinated MEP,” said Zander, “so we'll have duct, conduit, and piping all installed on racks about 20 feet long. They'll be fully assembled and tested off site and then raised up in the corridors. That eliminates a lot of onsite labor, working on ladders, and things like that — it's just a much more efficient way to install the majority of the mechanical systems and it makes future repairs and upgrades easier. It's all being done through the BIM model, so they are very accurate as builds and identification.”

The work site is busy with about 24 Lathrop-Turner staff and close to 230 tradespeople.

“We will peak out at approximately 450 tradespeople when we're working on the structure and fitting out the tower,” said Zander. “It will be a busy place.”

Zander is depending on key staff support such as Bill Kidd, Lathrop-Turner's project manager and Joe Zunk, the firm's senior superintendent.

“Joe is the field general and he manages all the subcontractors' schedules, manpower, deliveries, and field operations — the buck stops with him,” said Zander, “and Bill not only oversees what Joe is doing, but the engineering side of the project as far as contracts, change orders, and documents from the architect.

“We have a trailer complex that is co-located with the owner and their representatives, including the architect and other consultants,” he said. “Everybody is here and we can communicate immediately. It's a very collaborative environment.”

The work space is tight.

“We have enough space,” said Zander, “but it's a constant effort to keep things organized and only keep here what we need and to not let things get stagnant. We have a remote lot that we use for contractor trailers and the staging of some materials that is about one-eighth of a mile away. This helps a lot because if we get a delivery during the night, a truck can sit in the lot and be ready to enter the job site in the morning.”

“We are at a 93 percent recycle rate with our trash and debris from the project,” said Zander.

Prior to this project, Zander was working on a large healthcare project in Columbus, Ohio.

“It dealt with a lot of renovations and a tie-in into an existing building associated with it,” he said. “It was also a high-rise construction and the lessons learned on it are helping here. We have a lot of subcontractors and workers and we have tried to anticipate all the issues that might arise. The challenge is the execution and we have a solid plan and a great team, not only with our staff, but with ProMedica and the architect. That makes a big difference.”

“We're doing the cast-in-place concrete work at the parking deck — this includes foundations [grade beams and pier caps], walls, slab-on-grade and the post-tension deck,” said Dave Spence, Spence Brothers' vice president. “We're excited to be part of this job — it's a big project. We started the work in November 2016 and expect to finish our scope in late August 2017.”

Spence Brothers has rented two cranes from Capital City in Toledo — a Manitowoc 200 ton crane and a Link-Belt 75 ton crane. Additional, smaller equipment was rented, which included forklifts, manlifts and light towers. All major equipment is being serviced and operated by Capital City.

One issue that Spence Brothers, as well as the other subcontractors on the project are dealing with, is a shortage of manpower. Dave Spence noted that age attrition and the widening skills gap continues to be a growing concerning in the construction industry across the nation and poses problems for contractors in acquiring the necessary manpower to complete large-scale projects such as this one.

“Lack of manpower is a real problem in Michigan and is a challenge for everybody right now,” he said. “We had some hard times five or six years ago and a lot of people got out of the trades. Now, as work increases, we're all having trouble filling that void. We would have liked to hire all local crews for the project, but we had to bring in some people from Michigan. We're fortunate to have a very skilled group of tradesman working to build our projects but as our workload increases, we're always in need of more. Contractors across the Midwest are struggling to find adequate manpower, and this project is no exception.”

“While our portion of the project had a late start, the steel erection has proceeded fairly smoothly,” said John Reminger, Schuff's project manager. “Our first phase, called the OPC [out-patient center] completed steel erection in late June. We then began the erection of the two-wing tower, which is scheduled to complete erection in late November or early December. Our only challenges are semi-typical to any project of this size, being space for material and delays. Schuff Steel, on this project, has detailed, fabricated, and transported the structural steel to the project. We also contracted with a sub-erector to erect the building on site.”

Henry Gurtzweiler has approximately 40 employees on site. Schuff is using a variety of equipment: a Terex SK405 tower crane, a Terex SK415 tower crane and a Grove RT890E hydraulic crane; a Genie S-85 and a JLG 860SJ boom lift; and a Genie GTH 1056 reach forklift.

“All of the equipment has actually been running very smoothly on this job,” said Reminger. “Service repairs generally are taken care of the following day from the rental companies.”

Henry Gurtzweiler is renting equipment from NES, located in Toledo.