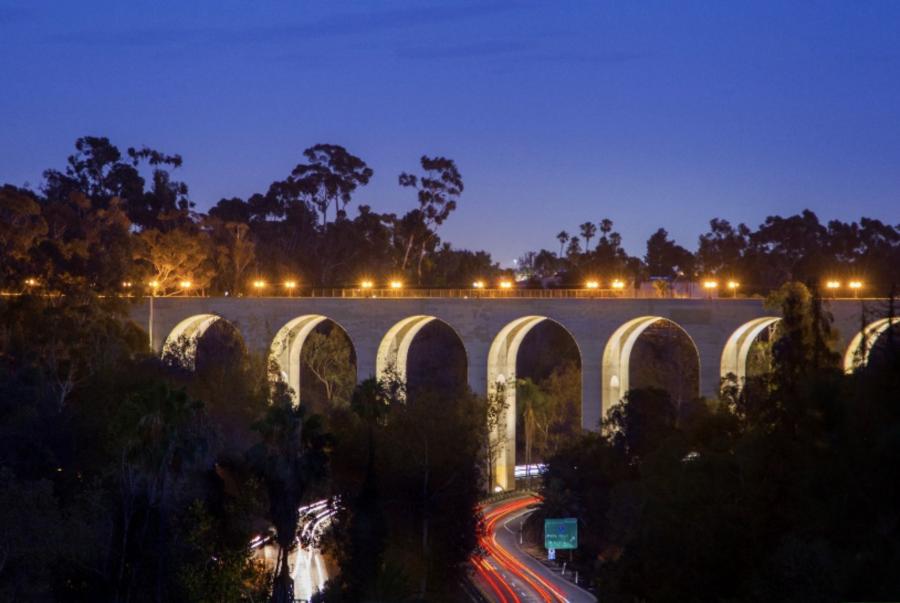 Caltrans announced that the Laurel Street Overcrossing/Cabrillo Bridge Retrofit and Rehabilitation Project was awarded the 2017 Seismic Safety Award. The $38 million project brought the 100-year-old bridge up to current earthquake safety standards, all with almost no impact to the historic bridge's architecture.

“This project provided a context-sensitive solution that respected the historic integrity of this bridge and its value to San Diego. This resulted in a beautifully preserved landmark for future generations that is also safeguarded from loss due to an earthquake,” said Malcolm Dougherty, director, Caltrans.

Rehabilitation and seismic retrofit of this historic structure was necessary to improve the structural integrity of the bridge and to help ensure the safety of the traveling public passing under the structure and across the bridge.

Retrofitting, all concealed within the internal framework of the bridge, included horizontal post-tensioning in the superstructure and vertically post-tensioning the piers with new shear walls. Work also included the removal and replacement of unsound concrete and steel reinforcement. The project was completed in May 2015.

The Laurel Street Overcrossing at SR-163, also known as the Cabrillo Bridge, is located in the heart of Balboa Park near downtown San Diego. The bridge, a multiple-arched cantilever structure, was the first such bridge in California and is intended to resemble a Roman aqueduct.

The historic bridge carries vehicles, pedestrians and bicyclists and is a vital link across SR-163, Cabrillo Canyon and Balboa Park.

About 108,000 vehicles a day travel the portion of SR-163 under the bridge, providing access for tourism to Balboa Park — home to more than 15 museums, the Old Globe Theatre and the San Diego Zoo.

The Seismic Safety Award, sponsored by Caltrans, was introduced in 2015 and honors the best of California's transportation projects with an emphasis on seismic safety from across the state. The award is open to Caltrans districts, local and public transportation agencies and private engineering and consulting firms.

The award is given by the Seismic Advisory Board, an independent body whose role is to advise Caltrans on seismic policy and technical practices to enhance the seismic safety and functionality of California's transportation structures. The Board continually reviews Caltrans' earthquake engineering and seismic design practices, formulates recommendations for improvements to these practices and is available to provide the general public with explanations regarding Caltrans' seismic safety policies and procedures for maintaining safety and functionality of California's transportation structures.