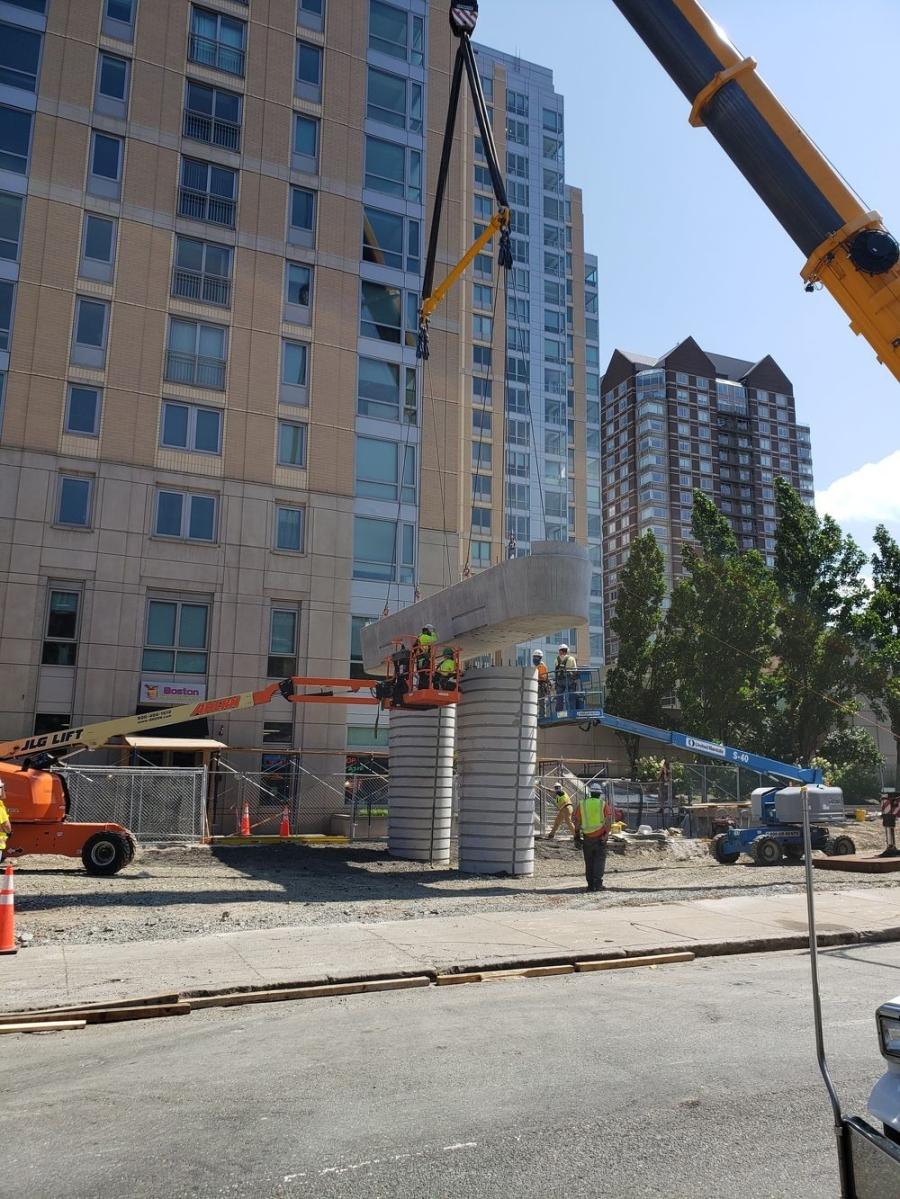 This summer, massive precast concrete pier caps were lifted into place atop new support columns on the Lechmere Viaduct transit construction project across the Charles River in downtown Boston.

Modular, prefabricated bridge designs have proven to be a critical component of accelerated bridge construction (ABC). The FHWA favors the ABC bridge construction technique especially in the design of highway bridges that feature varied spans, skew angles and construction materials. Prefab's contributions to the ABC process has earned it a place at the state and city transportation levels, as well.

High-performance materials used in prefabrication of bridge elements enhances the entire construction operation. Their integration is expected to significantly improve the condition of the United States bridge network, increase the life-span of bridges and minimize the need for maintenance and repair, according to FHWA research.

The federal highway agency defines PBES as structural components of a bridge, built offsite with a goal to reduce onsite construction time and mobility impact in building new bridges or rehabilitating or replacing existing bridges. Components are built outside traffic areas and transported to the job site where they're installed quickly and efficiently. 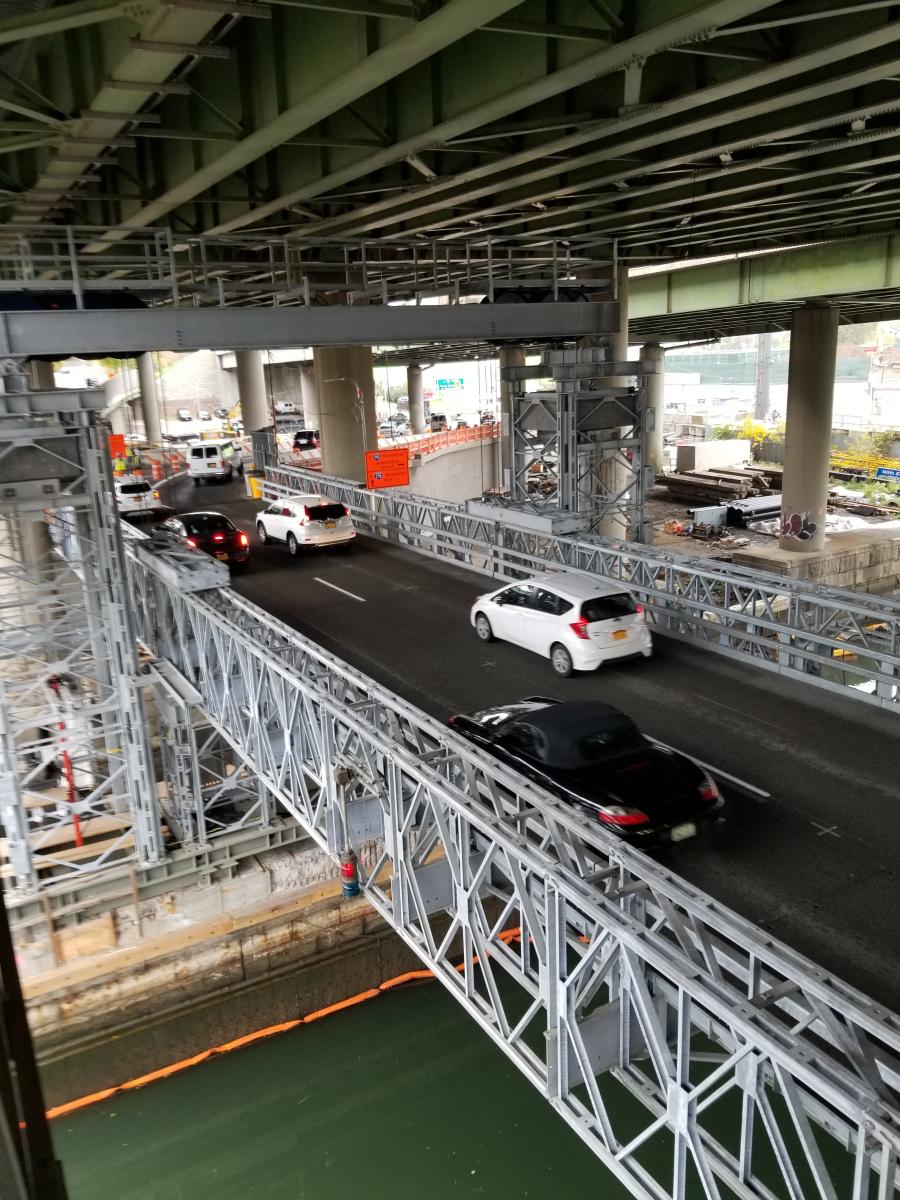 Over the past 20 years, the construction industry has transitioned to the ABC approach. Once prefabrication is completed off site, bridge components can be slid and moved into place quickly to reduce inconvenience to the public and also enhance the safety of construction workers, according to PCI Northeast, a chapter of the Precast/Prestressed Concrete Institute.

The prefabricated bridge components undergo quality controls before they are transported to the site for assemblage. The use of ABC is now employed all over the world for the construction of roads and bridges because of all the benefits associated with it, which include improvement of workers' safety, the overall quality and reduction of inconvenience to the general public.

The organization believes that "from the perspective of the client, accelerated bridge construction may require a change in how projects are approached and justified."

The chapter's website explains that an advantage of employing ABC is reduced mobility impacts or, better still, reduced traffic flow. "This is because the flow of transportation network and the general safety of road users are linked directly to the impact of the activities associated with onsite construction."

Onsite construction has been associated with significant social impacts on safety and mobility, according to PCI Northeast. The direct and indirect costs of traffic detours which can arise from the loss of a bridge during construction are sometimes greater than the actual cost of constructing the structure itself.

"Other good reasons to use ABC have to do with site constructability issues. Most times, the ABC approach can provide solutions that are economical and more practical compared to solutions provided by conventional construction methods."

The Strength of Prefab

Prefab bridge construction methods are proving to be a boon for the Lechmere Viaduct transit construction project across the Charles River in downtown Boston. The concrete arched viaduct, which opened to streetcars in 1912 and now carries Green Line trains, is being rehabilitated, and some of its track replaced.

The goal is to allow more Massachusetts Bay Transit Authority (MBTA) trains to pass over the bridge.

"We will strengthen the structure of the 110-year-old viaduct to handle heavier loads and increased train frequency while also preserving its historic façade," said MassDOT in announcing the project last year. Work includes the complete reconstruction of track, signals and traction power on the viaduct.

He said the project enhanced safety for construction workers by reducing fall hazards.

"Quality control is better in a manufacturing environment that is out of weather conditions and provides an ergonomic work environment," he added.

Pesaturo attributed improved scheduling to prefabrication and support foundations being able to advance in parallel. Cost savings, in addition to the notion that prefabricated elements have less errors and create greater efficiency, also were benefits of this construction method, he said.

"A major benefit is the efficiency of construction field operations," said Pesaturo. "In the dense areas of Cambridge, Somerville and Medford [Massachusetts], work timeframes for the installation of large pre-cast beams are limited to weekends, due to the project's proximity to a highway and commuter rail corridors.

"Prefabrication allows for manufacturing to occur offsite during the standard work week. Pre-cast beams are transported to the work site late Friday. Then the beams are installed in their final locations during roadway closures over the weekend. Roadways are then reopened early Monday morning."

Prefabricated girders are providing faster and safer construction on the Northgate pedestrian and bicycle bridge project in Seattle this summer. In July and August, Seattle DOT (SDOT) crews will be installing the first set of bridge spans linking a major residential and employment destination neighborhood.

Ethan Bergerson, SDOT media relations lead, said that prefab girders on the project "are more economical and of superior quality because they are manufactured in a controlled environment."

He explained that "the girders we are using on the Northgate Pedestrian and Bicycle Bridge are also prestressed, which provides long-term durability and fewer maintenance requirements."

SDOT designed the new, accessible pedestrian and bike bridge over Interstate 5 in Northgate to improve access to communities, services and opportunities as it connects the east and west sides of the interstate.

"It'll also reduce travel time for people walking and biking between the east and west sides of I-5," according to an SDOT project update. "When complete, the bridge will help connect the neighborhood's thriving job and retail centers with the rest of the city and region."

The new bridge, for which the girders were pre-built, will span about 1,900 ft. over I-5, landing at North Seattle College on the west side and near a future light rail station on the east side. The spans being installed make up the portion of the bridge that's referred to locally as the "hairpin turn."

A Big Help for a Little While

Sometimes a temporary solution is needed, and modular prefab methods are the perfect vehicle. Acrow Bridge designed, engineered and delivered two temporary modular, prefabricated steel lift bridges during the replacement of the 65-year-old Unionport Bridge over Westchester Creek in the Bronx, N.Y.

The first hydraulically-driven temporary lift bridges in the United States, the steel detour structures are expected to be in service for two years. The north lift bridge is 24 ft. wide with 60- and 100-ft. approaches and a 66-ft. lift span.

Bob Rose, Northeast regional sales manager, said there were challenges that made the project technically difficult during the installation stage. Even with "an extremely congested construction site and a very small build area, we were able to successfully build, install, test and get the structures completely operational in a short period of time," said Rose.

The heavily traveled Unionport Bridge is the only link between the Bruckner Expressway and Cross Bronx Expressway to the Hutchinson River Parkway and destinations north. The bridge had deteriorated and was deemed structurally deficient and in dire need of replacement.

The detour lift bridges were a value engineering proposal by Unionport Constructors JV, owners of the bridge replacement project. The team was able to shorten the duration of the project, maintain seamless traffic throughout construction, and build the new bascule bridge all at one time.

In a construction industry forecast, financial advisory firm Deloitte noted that one of the trends to watch in 2020 is the move toward modularization and prefabrication of components.

"The rise of module assembly yards — strategically located sites for fabrication and assembling building elements that can then be transferred to a building site for rapid assembly — borrows some of the cost-efficient practices of manufacturing for the construction industry," the report said.

"Modularization has potential to significantly affect productivity and margins for engineering and construction [E&C] firms. In the year ahead, E&C firms could consider evaluating the potential for adding a module assembly yard to production. They can explore the potential cost savings that pre-assembly and modularization could bring to projects," it continued.

Modularization and prefabrication not only can save on labor costs but might also ensure better quality and shorten the project schedule with less labor required onsite, noted Deloite. "This can avoid rework and help improve safety as well." CEG