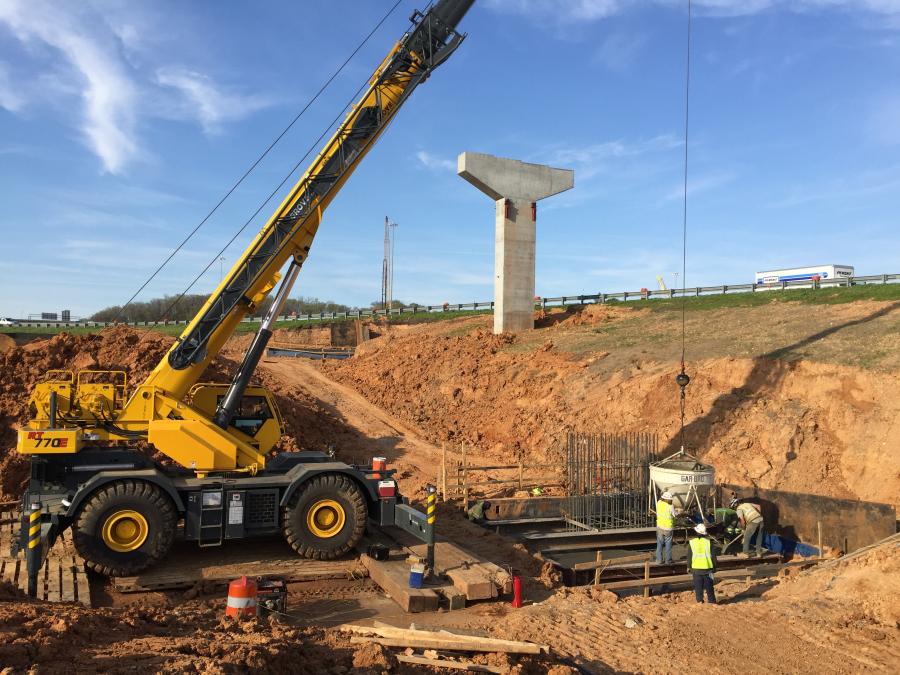 The Alabama Department of Transportation is spending more than $700 million to rebuild and upgrade a 2-mi. stretch of Interstate 59/20 that runs through downtown Birmingham via a three phase project that started in September 2015 and will be completed in 2020. (Granite Construction photo)

The Alabama Department of Transportation is spending more than $700 million to rebuild and upgrade a 2-mi. stretch of Interstate 59/20 that runs through downtown Birmingham via a three phase project that started in September 2015 and will be completed in 2020. The work includes improving and replacing the elevated portions of the Interstate and the replacing and renovation of many bridges crossing the I-65 and I-59/20 Interchange.

This project is being paid for through funding from ALDOT, the Federal Highway Administration and the Birmingham Metropolitan Planning Organization.

Phase I, which cost $7.4 million and was completed in the fall of 2016 by Brasfield and Gorrie LLC, dealt with bridge widening, bridge raising, grading, paving and drainage.

Phase II, which costs $210 million, started in March 2016 by Granite Construction Company, will be completed by Aug. 31, 2018 — half of the work has been completed. Its goals include redesigning and constructing the new interchange ramps at I-65; widening I-59/20 from I-65 to Arkadelphia Road; installing new connector ramps into and out of downtown for northbound and southbound I-65 and westbound I-59/20; installing new storm drains, sanitary sewer lines and water lines; and completing 21 new bridges, retaining walls and installation of several mi. of new concrete and steel beams.

Phase III, which costs $475 million started in mid-June and will be completed in November 2020. Johnson Bros. will do the following: replace I-59/20 bridges, construct new connector ramps at Red Mountain Express interchange, grading, paving, retaining walls and drainage.

This work is needed for the aging structures.

"We could not afford to wait before taking action, as portions of the roadway had literally began to fall apart," according to the project web page. "Designed in the 1960s, the Central Business District bridges were originally designed with a 30-year lifespan, and intended to carry up to 80,000 vehicles per day. Today, some 45 years later, daily traffic exceeds 165,000 vehicles, and this number is expected to increase to 225,000 by 2035."

In 2011, after consultation with the city of Birmingham and Jefferson County, it was determined that a simple re-deck would be insufficient to address the design deficiencies that currently subject motorists to persistent congestion and unsafe road conditions along I-59/20 through the Central Business District. There are no shoulders on the current roadway, meaning emergency responders cannot remove disabled vehicles or address emergencies without causing traffic to stop, according to the website.

There are multiple areas in the relatively short 6,600-ft. section of elevated structure where motorists are forced to "weave," or make unsafe lane crossings, in a short distance in high traffic conditions," according to the web page.

These conditions already result in regular accidents, and will only increase and worsen unless improvements are made.

Burying the interchange was rejected for numerous reasons, including a lack of space and impact on adjacent buildings, the complications of utility relocation.

The bridges being replaced vary in length and shoulders will be added. ALDOT is using a segmental bridge design for the new bridges, which allow for faster construction times, and will reduce noise and vibrations associated with the traffic flow once they are completed.

The new road and bridge infrastructure was designed by Volkert and Corven Engineering.

"One of the key issues that had to be addressed in the design phase was creating new access into Birmingham at I-65 and the Red Mountain Expressway," said DeJarvis Leonard, PE, ALDOT's east central region engineer, "and this was due to the fact that exit and entrance ramps to I-59/20 is currently on the existing bridges. New bridges have a typical lifespan of 50 years, but should last longer. Based on our engineering analysis, a better level of service will occur after the new bridges are open. We've been planning this project for over 10 years, and we're pleased with the current movement of the project."

The impact on traffic was recognized early on by ALDOT and the general contractors on the project had to demonstrate their ability to minimize the impact of their work on local commuters and businesses.

ALDOT is posting all information about closings, detours or anticipated traffic delays on the project web site, and is sharing this information with local media and area officials, as well as on Twitter and Facebook.

"Overall, the traffic management plan is working," said Leonard. "We're urging people coming into Birmingham to try to take an alternate routes. The key to making the plan work is a combined coordinated effort with all stakeholders."

The Interstate 59/20 bridges will be closed for nearly 14 months starting in the fall of 2018.

"We're close to 50 percent complete," said Matt Strother, Granite's project manager. "We've done over 80 percent of the substructure for all the bridges that are due to be installed on this phase, we've started the bridge decks on a few bridges, done a lot of earthwork, some of the asphalt paving, and like items. What's left to do is mostly work on the bridge structures."

The bridges range from 300 ft. one mile in length, mainly two lanes in one direction, with a few that have lanes in both directions.

"They have worked well with us to keep the project moving smoothly," said Strother.

"It's a tight work site due to the traffic and getting materials in and out is extremely difficult," he said. "We've put in temporary lane closures in a lot of places to give us space to work and we're doing some night work. The traffic is the biggest challenge."

ALDOT has closed some lanes and local police are helping to slow drivers down in the work zone. Granite also is using its people to help with temporary traffic control measures.

The workers are divided into several crews that deal with footings, columns, caps, setting beams and other key aspects of bridge work.

"Whenever a crew gets done with a bridge, they'll go to another one and the following crew will follow behind them," said Strother. "The system is working well."

Manpower was the initial issue, but that was dealt with by bringing in Granite employees from other regions.

"We've not been able to find everyone locally," said Strother. "Until the Phase III job work starts, this is the largest job that ALDOT has ever done, so you can see imagine, if you combine all these jobs together, how much of a strain that would be on the local workforce that has a bridge building background."

The completion times for bridges are not based on their size or length.

"For a lot of them," said Strother, "the work is sequenced by the traffic control we have to do to maintain traffic throughout the project — some will go on for quite a while. In fact, one of the smaller bridges is one of the last we'll do because of the phasing. There is only one bridge that we've closed completely."

Utilities are an issue too, with a major one being the demolition and reconstruction of a smaller bridge that carried an AT&T fiber line.

"We had to build a temporary bridge across the highway to keep it functioning," said Strother, "but other than that, most of the utilities had been replaced before we moved into an area."

The schedule for the Phase II work is an accelerated one.

"We're used to such schedules at Granite — we build a lot of these projects nation-wide that have tight schedules and local constraints," said Strother.

Steel beams and rebar are going to recyclers, as is asphalt.

"The problem is that there is an of abundance of concrete, asphalt, and other aggregates," said Strother, "so you basically have to pay to haul them off. In other parts of the country it's a big commodity, but we have an excess here."

On this project, Granite is using a large amount of equipment that is being supported by four on-site mechanics.

The work site is 2 mi. from Granite's local shop/yard, but having the mechanics on-site ensures that the schedule benchmarks are being met.

"Our mechanics are well-rounded," said Strother, "but if there is something that is more major, we'll call in a manufacturer representative. The wear and tear on the equipment is nothing special — just the regular fueling, oiling, greasing, taking out bucket teeth and cutting edges. The repair times depend on what the trouble is. Some things are just a couple of hours and some have longer lead times if they need to get parts. The mechanics keep our equipment running all the time – we've had little down time. As soon as a machine goes down, they're working on it. They do most of the routine maintenance at night."

Granite purchases its Cat equipment from Thompson Cat in Birmingham and Link-Belt cranes from Atlantic and Southern, which also has an office in Birmingham. The Grove cranes are being rented from Cowin Equipment (Birmingham).

Strother noted that Granite crews and management make it a point of absorbing lessons learned rapidly.

"All the techniques we use are just things we do day-to-day," he said. "We have a lot of knowledge from over the years that evolved from previous projects. With our overall management system, lessons learned are integrated in quickly."