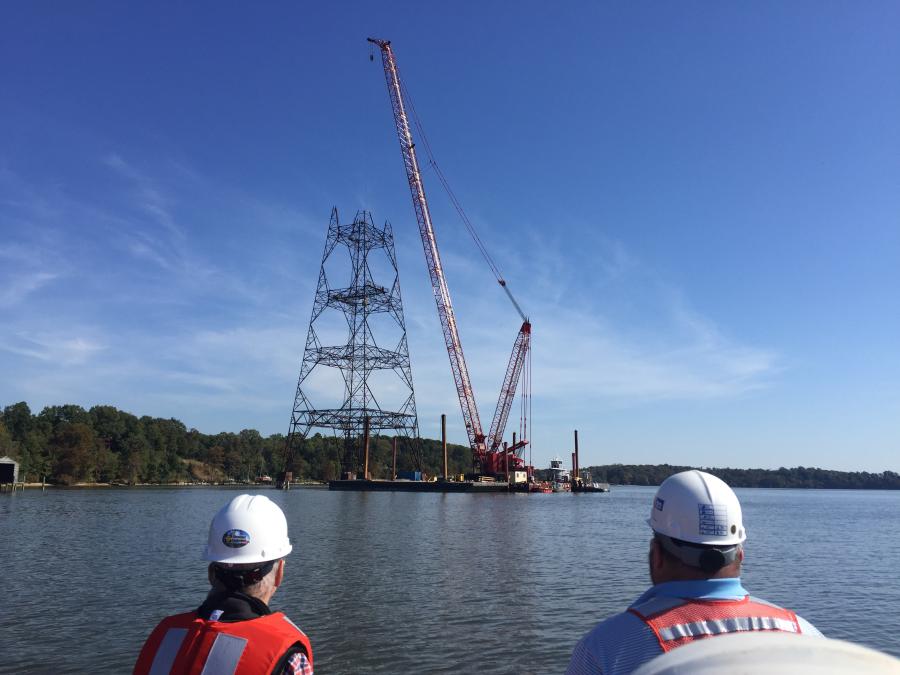 Cianbro is the latest company to take advantage of the barge-mounted benefits that Manitowoc crawler cranes with Variable Position Counterweight (VPC) offer.

Cianbro is the latest company to take advantage of the barge-mounted benefits that Manitowoc crawler cranes with Variable Position Counterweight (VPC) offer. The Pittsfield, Maine-based construction firm is using a Manitowoc MLC650 to help replace two aging transmission towers on the James River near Charles City, Va. The new towers will help feed energy from a nearby nuclear plant to the surrounding area when construction is completed.

The two towers stand 425 ft. tall, rising from the James River. While planning the project, it became clear that a barge-mounted crane would provide more efficiency, as the crane could complete lifts in closer proximity to the transmission towers. Previous generations of crawler cranes that would have been used to get the reach and capacity needed for the job may have been too large for erection on a barge. But the MLC650 with VPC-MAX has the reach and capacity in specialty barge charts to get the job done.

“In the past, we would have had to build a trestle, cofferdam or causeway to accommodate a traditional crawler crane with the necessary capacity,” said Mike Berry, lift superintendent of Cianbro. “The MLC650 has the right capacity and a compact footprint that fits securely on a barge, which enables us to lift from an optimal position on the river.”

Cianbro's MLC650 is erected on a Poseidon P10 portable sectional barge, which measures 132 by 132 ft. Once the crane removes the old transmission towers, it will then set the replacement towers into position on the river. The heaviest components of the new towers are their 100 by 90 ft. bases, which weigh 75.5 tons and will be lifted to a height of 10 ft. The upper halves of each tower weigh 28 tons and will be lifted 435 ft. above the water for installation. To dismantle the old transmission towers and erect the new ones, the MLC650 is outfitted with the VPC-MAX attachment, which enhances the crane's capacity and enables additional boom- and jib-length combinations.

Each tower section will be assembled at Shirley Plantation on the north bank of the James River, 9 mi. away from the construction site. Once completed, the sections will be moved into position by barge, where the MLC650 will install each one.

“The MLC650 with the VPC-MAX is the only crane that had a load chart that would enable us to complete the project this efficiently,” Berry said. “Also, you don't get any listing of the crane on the barge, so you can lift without moving the crane. The VPC counterbalances everything and the crane stays level, even when completing the heaviest lifts.”

Cianbro received the MLC650 from Shawmut Equipment, a Manitowoc crane dealer that has served New England and the Atlantic provinces of Canada since 1957.

“We get all of our cranes from Shawmut Equipment,” Berry said. “I've been doing this job for 15 years, and Cianbro has been working with Shawmut since long before that. Brian O'Connell and the rest of the Shawmut team were instrumental in helping us choose the MLC650 for this project. He spoke with our engineers at length to determine the best crane based on our parameters.”

The tower replacement project is being overseen by PAR Electric, which brought Cianbro onboard as a subcontractor. The Kansas City-based company is one of the most respected outside plant electrical contractors in North America, handling some of the biggest large-capital transmission, distribution and substation projects in the region.

Cianbro was founded in 1949 and has since grown into one of the largest employee-owned construction companies in the United States. The company operates in more than 40 states, specializing in civil, structural, mechanical, electrical, instrumentation, fabrication and coating projects.

The transmission tower replacement began in August of 2017 and is on schedule for completion in February of 2018.