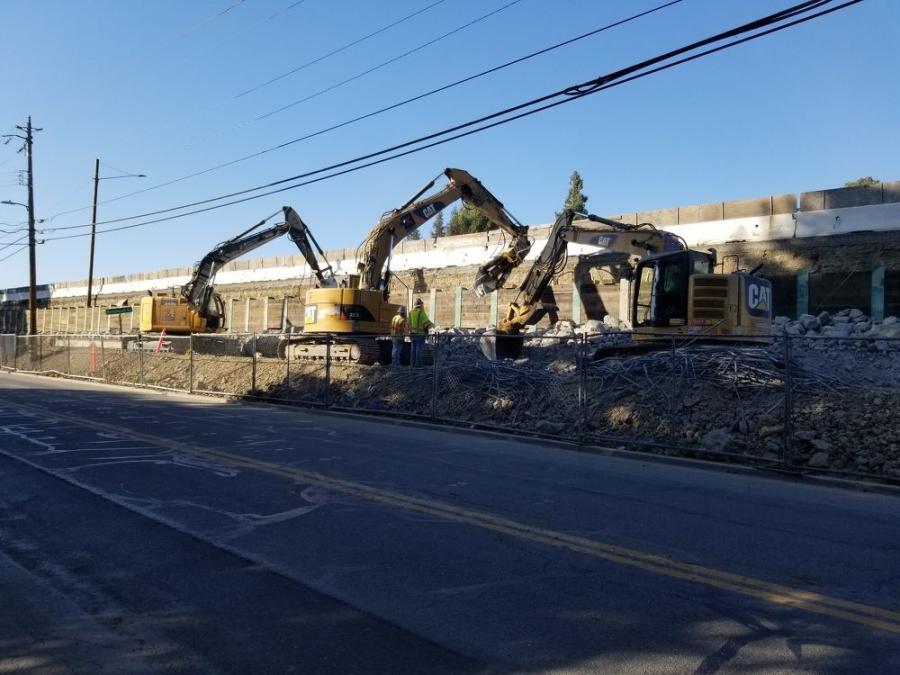 Bay Cities Paving & Grading Inc. serves as the general contractor for the $123.2 million project to make improvements on I-680.

Bay Cities Paving & Grading Inc., the general contractor located in Contra Costa County, began work on the $123.2 million project to build 11 new mi. of express lanes and other road infrastructure on southbound I-680.

This includes the addition of 3 mi. of new high occupancy vehicle (HOV) lanes through the city of Walnut Creek from North Main Street to Rudgear Road that will be converted into an express lane along with the 8 mi. of existing HOV lanes.

Crews started on the Martinez to Walnut Creek section on Oct. 3, 2018, and was expected to be completed in late 2021. However, the strong partnership between Bay Cities Paving & Grading, CCTA and MTC has greatly accelerated the construction schedule. Work on this section is substantially more complex than the previously opened Walnut Creek to San Ramon section, which cost $56 million and was opened to traffic in October 2017.

Along with Bay Cities, partners for this project include the Metropolitan Transportation Commission (MTC) and the Contra Costa Transportation Authority (CCTA), in cooperation with the California Department of Transportation (Caltrans) and the Federal Highway Administration (FHWA).

The new lane capacity will connect to MTC's existing express lane between Walnut Creek and San Ramon to provide 24 mi. of continuous express lanes in Contra Costa County between Martinez and the Alameda County line. This project is part of Plan Bay Area, MTC's Regional Transportation Plan to install a 550-mi. network of express lanes in the Bay Area by 2035.

"We're about 80-percent complete on the project," said Dave Pezel, Bay Cities project manager. "The structure work is 95-percent complete and the majority of the widenings are complete. We're coming into the final stages and will be placing the final lift of the open graded asphalt this fall. The project will be completed in 2021, with the major activities wrapping up in a few months."

Bay Cities purchased a CC1700 Atlas Copco crusher bucket that has been helpful for the demolition of existing concrete barrier and retaining walls. 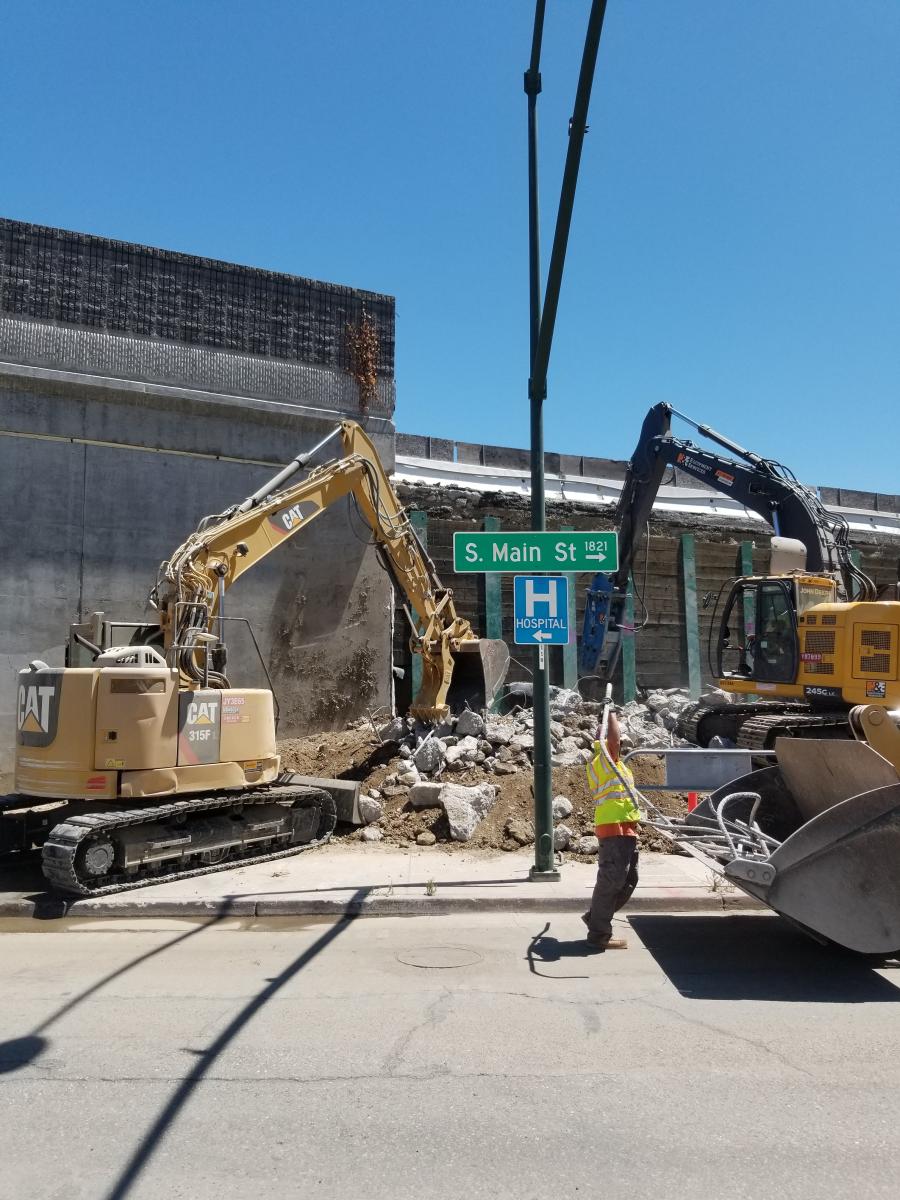 "They have been a major help in coordinating the schedule," said Pezel. ‘The team dynamic has been good. Our focus is on the schedule and coordinating with the subcontractors and the agencies. [Eric] Lilly [resident engineer from WSP] has been a huge help. Our partnership on getting the job done has been paramount. Dreesen, who leads the crews in the field, has put together a leading group of laborers and operators that are working multiple shifts and extended hours. The crews that we have are very accomplished."

Previous work during the summer included the completion of overhead sign structures on Rudgear to Livorna, construction of the sound wall on Retaining Wall No. 4 from South Main to Crest Avenue, modifications at the intersection and the sidewalks of the SB I-680 on- and off-ramps and South Main, highway widening at various locations between Ygnacio Valley Road and Olympic Boulevard; and ongoing construction of the median concrete barrier on I-680 from Rudgear to Livorna highway and ramp widening between South Main and Rudgear.

Work for this project also includes the installation of sound and retaining walls, lighting, signage (static and dynamic) and sign structures, re-striping and new lane markers and upgrading CHP enforcement capabilities. The tolling equipment (electronic toll tag readers) is being installed and tested by TransCore under a separate contract, between October 2020 to September 2021.

Peak days have between 75 to 100 Bay Cities and subcontractor employees on-site, with the major ones being Bridgeway Civil Constructors, Tennyson Electric and Vanguard Construction.

"The majority of the asphalt that we're removing is being grinded and repurposed for use on-site," said Pezel.

"We have full-time mechanics on call to get equipment that is broken down back up rapidly – usually the same day," said Pezel, who depends on operators and equipment support staff to alert him about problems. "We service our equipment daily – the machines are fueled and lubed and the oil is inspected daily."

This project has Bay Cities dealing with several agencies and multiple contractors within the corridor.

"My direct link to the project is Eric Lilly, resident engineer from WSP, a construction management firm hired by CCTA to oversee the execution of the project," said Pezel. "We're a day-and-night-time operation to get it done within the time allotted — just manning resources and making sure the project is moving forward is one of the major challenges. But the team we have has been phenomenal in making sure we're all working towards a common goal and getting it done on-time and on-budget."

Utility issues are being encountered. 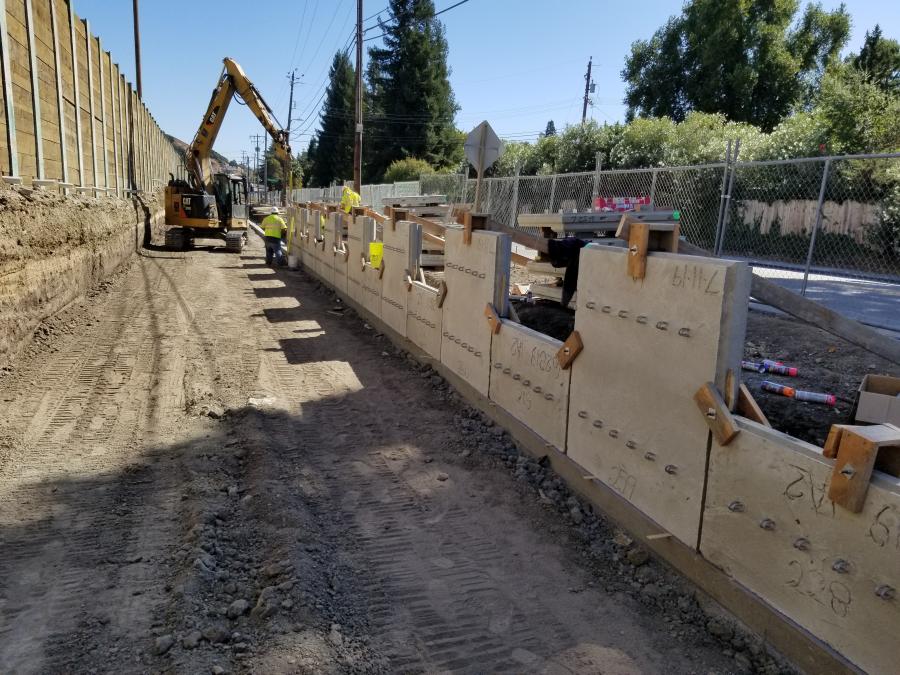 "The design time had factored those in and working around them has been a challenge," said Pezel. "When we do run into a buried man-made object or utility, the design team and WSP are notified and they've been very responsive on getting us quick answers to resolve the situation and continue forward. With multiple sites and continuous operations, the challenge is making sure that everybody is in the right place at the right time. Scheduling is an issue, making sure that we are not only looking at an impact on a given day, but are also looking ahead for future impacts.

"There are other projects within the corridor and making sure that we're not conflicting with each other's lane closures has also been a challenge for us and the subcontractors," he added. "We have a good team and we've figured out ways to work around all the challenges."

The new lanes being constructed, at various sites over an area of 15 to 20 mi., are predominantly located in the southbound section of I-680 on the shoulder from the Olympic to Rudgear area.

"On a given basis we're working at multiple sites in an effort to save time on the schedule," said Pezel. "The work is going really well and we're ahead of schedule."

The construction of the new lanes goes hand-in-hand with the installation of the supporting structures and new utilities.

"The initial staging was to relocate the existing fiber optic backhaul system servicing the express lanes from the median, which consisted of the barrier and the new tolling system and lighting," said Pezel. "Once that was complete in early 2019, we shifted our focus to the majority of the work – the outside widening, structural work, retaining walls and the bridge. This will be completed in a few weeks and then the focus will be on the final paving overlay through the fall."

With most of the Bay Cities crews out of the way, TransCore will have plenty of space to install the tolling equipment.

The mass excavation for the widening also included the retaining walls and the bridge operations.

"Six retaining walls consisting of soldier beam, soil nail, cast-in-place and mechanically stabilized earth [MSE] were constructed all within a three-mile area over the last 12 months," said Pezel, who noted that the excavation work was followed by the structure work and backfilling. "The new retaining walls support the southbound 680 widening for the new express lane." 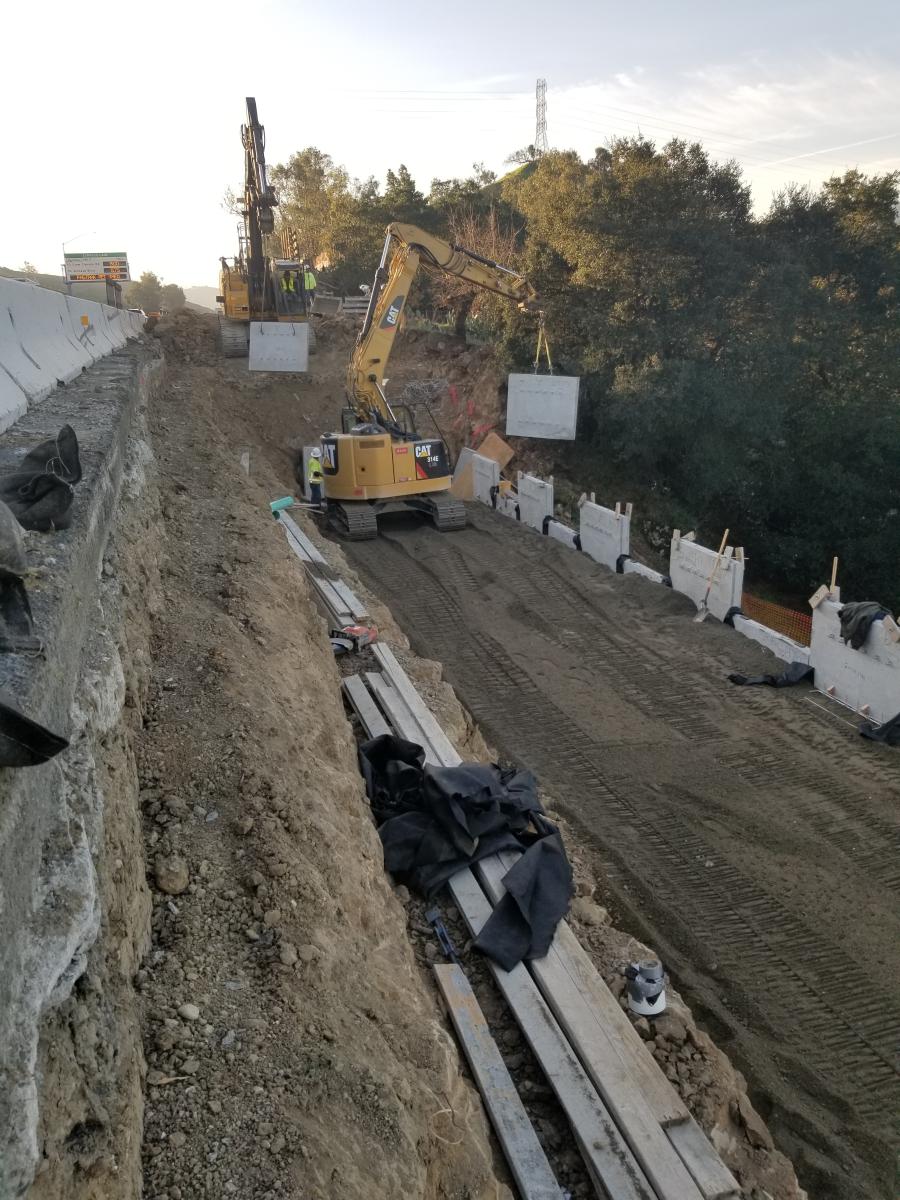 "Getting equipment and materials in and out in the tight work spaces was not easy," said Pezel, "Work that required a lane closure was done at night, while operations adjacent to residential communities was done during the day. We had to work within tight windows."

The retaining/sound wall construction is taking place on Alamo-Rudgear (to three-quarters of a mile south) and Walnut Creek-South Main to Castle Hill Road.

The majority of work activities, at multiple sites, are occurring within existing state right-of-way, especially for the new lane construction. To minimize long-term traffic impacts, crews are working around-the clock seven days a week. Temporary lane closures, reduced lane lengths and lower speeds in the construction zone are the main tools being employed to protect workers and motorists.

"We do multiple projects, so if we need to rent a piece of equipment, the dealerships we work with meet our needs," said Pezel.

When completed, this will be the longest express lane in the Bay Area. Construction of this project is being administered by CCTA with funding from Contra Costa Measure J, MTC, BAIFA and SB1 – Road Repair and Accountability Act of 2017 funds. 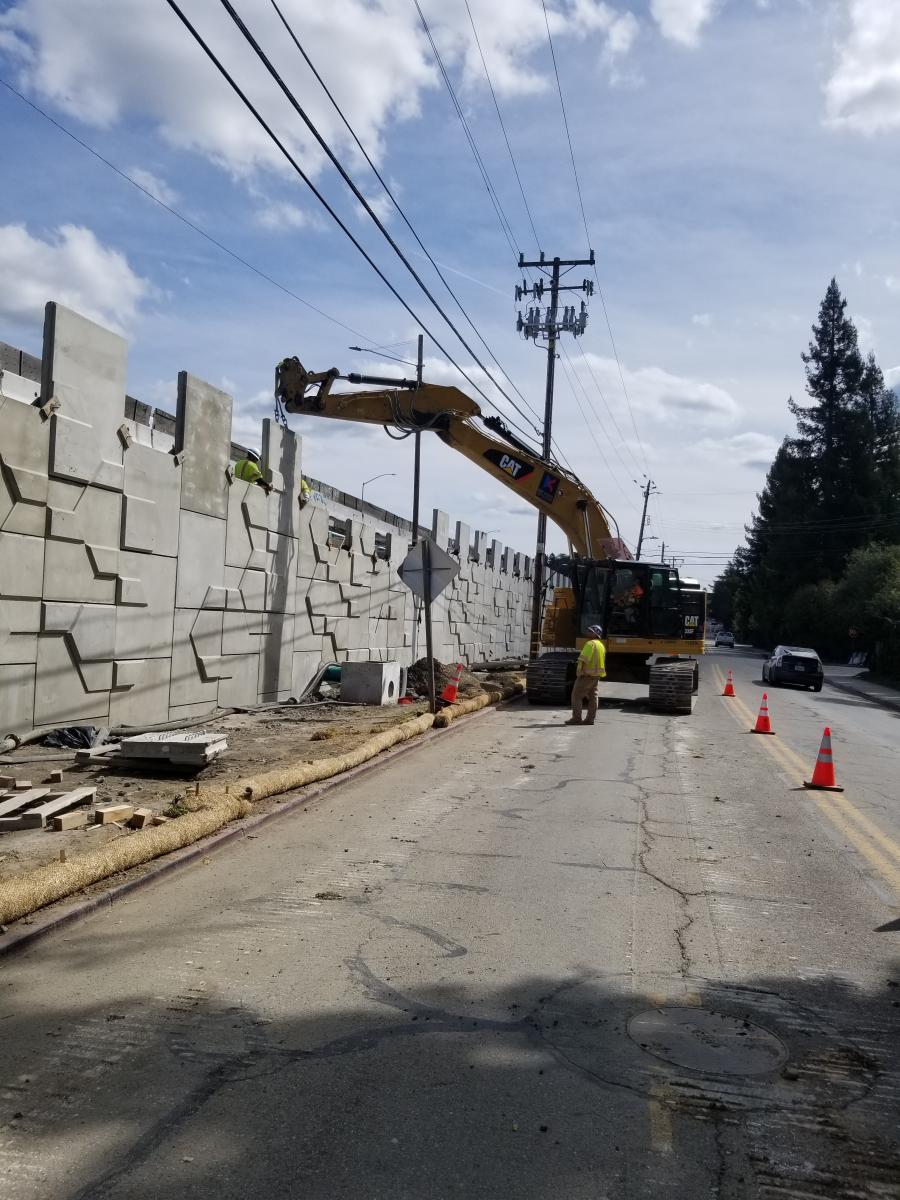 "Because carpools and vanpools equipped with FasTrak Flex tags can travel toll-free in express lanes throughout the Bay Area," said MTC Commissioner, CCTA Ex-Officio Board Member, and Orinda City Council member Amy Rein Worth, "we look forward to the new I-680 southbound Express Lane encouraging more carpooling and vanpooling through Contra Costa County."

Approval of the project and its environmental document took place between August 2014 and March 2017, with the design, completed by HDR, between October 2015 and September 2018. CCTA is using rubberized asphalt concrete for the construction of the new lanes, which should be quieter and longer-lasting.