The project was spurred by the state's desire to make it easier for tourists to reach the ever-popular North Carolina Zoo, a powerful economic engine in the area. 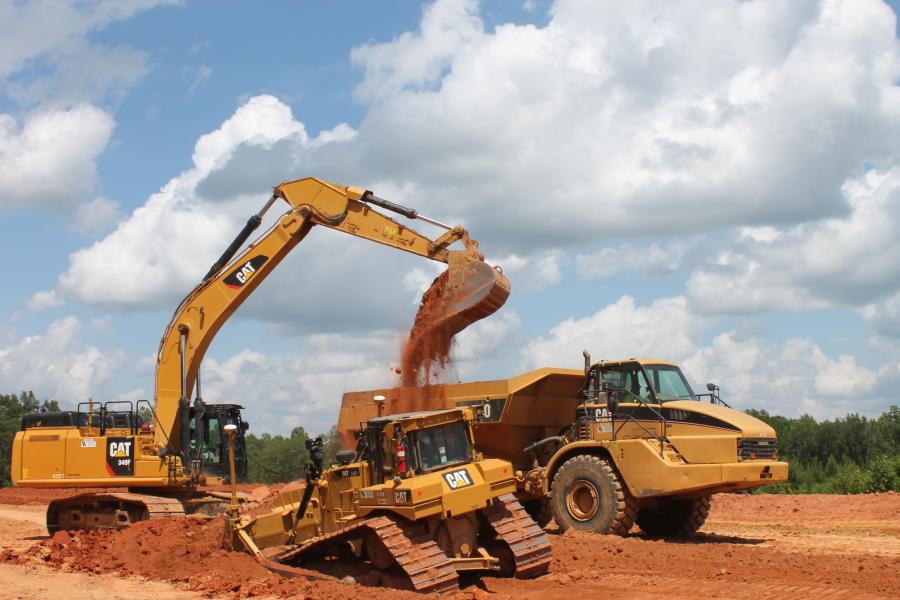 The operator of a Cat 349F excavator loading dirt into a Cat articulated truck while a small Cat D6T dozer moves in foreground on a long straight grade.

Anyone who has ever visited the North Carolina Zoo, located in the center of the state south of Asheboro, has experienced the often-maddening summertime traffic around the massive park. With more than 700,000 visiting the zoo each year, it is the Tarheel State's most popular tourist attraction.

That means that zoo visitors coming from the east or west, in particular along U.S. Highway 64, must contend with a seemingly endless string of stoplights before reaching Zoo Parkway, a two-lane road that takes them south to the attraction.

Located southeast of Asheboro, the open-air North Carolina Zoological Park is the largest walk-through, natural-habitat zoo in the world at more than 2,000 acres. It is home to more than 1,600 animals, with most of its 250 species of fauna being native to Africa and North America.

The large number of people coming to see those animals has helped spur the commercial growth of Asheboro along U.S. 64, leading to the current traffic problems for residents and visitors alike.

Now, in an effort to reduce congestion and improve the traffic flow on U.S. 64, the North Carolina DOT is working with a joint venture made up of two general contractors to design-build the $244 million U.S. 64 Asheboro Bypass.

The consortium includes Greensboro's Thompson-Arthur Paving and Construction (APAC), a division of APAC-Atlantic Inc.; and Wright Brothers Construction in Charleston, Tenn. The lead design firm is RK&K, the Baltimore-based engineering company with offices in Greensboro, Raleigh and Charlotte.

The bypass, which got underway last summer, is a 16.1-mi. four-lane highway that runs from existing U.S. 64 west of town near Stutts Road, loops around to the south and then back to the northeast before connecting with the present highway on Asheboro's east side at Dewey Road.

Designers planned the Asheboro Bypass to keep traffic moving from one side of town to the other by giving drivers a controlled-access highway separated by a landscaped median.

The project was spurred, however, by the state's desire to make it easier for tourists to reach the ever-popular North Carolina Zoo, a powerful economic engine in the area.

To help fuel that engine, the Asheboro Bypass also is part of a larger plan to upgrade the U.S. 64 and N.C. Highway 49 corridors. The U.S. 64 corridor being targeted runs from Statesville in the west to Raleigh in the east, while N.C. 49 goes northeast from Charlotte (through Asheboro) to Raleigh.

On the Asheboro Bypass, interchanges are currently being graded or cleared at six points along the planned route: at both ends of the current U.S. 64, as well as at I-73/I-74 (the north-south U.S. 220 Bypass), N.C. highways 49 and 42, and at the highly-anticipated Zoo Connector, one of the key components of the project.

The 1.8-mi.-long Zoo Connector will give zoo visitors better access to the park from the U.S. 64 Bypass straight to the zoo's entrance via a roundabout. Another short connector road also will allow vehicles to utilize the current Zoo Parkway (N.C. 159) to reach the brand-new Zoo Connector.

According to Cary Fine, senior assistant resident engineer of the NCDOT's Highway Division 8, the Zoo Connector will be the cherry on the top of the cake that is the Asheboro Bypass.

“The Zoo Connector is actually one of the last phases of the project,” he said. “Once the main part of the Bypass is done in that area, we can begin on the Connector. I would think that work will begin in mid-2018.”

Crews are currently working to clear and grade the sites for the interchanges, as well as for 18 bridge structures and six box culverts, Fine added.

“We are at the point now [July 5] where we have only cleared what is necessary just to get to these bridge and culvert sites,” he said. “Right now we have about 10,000 yards of concrete in our bridge structures and in our culverts. That work is ongoing, but we are about to wrap up the work on the culverts. Thus far we have moved about 1.2 million yards of earth in a little under a year.”

A tour of the various job sites revealed a tremendous amount of heavy-equipment grading and drilling going on in early July.

At the western end of the project, for instance, several Komatsu PC1250 mass excavators brought in by Wright Brothers were working alongside the current and busy two-lane U.S. 64. They were joined by several other machines from different makers, including loaders, off-road trucks and motor graders, many of which were Caterpillar brands. That included Cat 16H graders and Cat D6K skid steers.

Nearby, parked in a row, were five huge 100-ton Cat 777B haul trucks ready for action.

“I have never seen a truck that large working on a project around here before,” Fine said. “Wright Brothers is using them as it is in charge of the grading. Right now, the majority of the Asheboro Bypass work is theirs. Each day we typically have the 777s running this rock and doing the excavations and they soon should be bringing on more of these machines.”

Designs to Please the Eye

Fine said that it is part of the contract to include aesthetic features such as the elephant wherever possible on the bypass project — another indication of how important the N.C. Zoo is to Asheboro, Randolph County and the region.

As part of the enhanced look of the bypass, a Drystack stone pattern used on bridges and retaining walls also will be stained with three different colors, he added.

A Variety of Machines on the Job

Several miles away, several Cat machines were working in tandem to grade a straight stretch of future roadway, including a 349F excavator loading dirt into a succession of 740 articulated dump trucks, while a small D6T dozer skittered about the larger vehicles.

Rock drilling, blasting and hauling also is a large part of the project and Cat had machines to assist in that, too. A 330D excavator equipped with a thumb was spied breaking up rock near the middle of the new route in a 60-ft. cut.

At yet another site near the eastern end of the bypass, early bridge work was progressing at two places within a quarter-mile of one another. A concrete pour was scheduled for that afternoon at a bridge site over Vestal Creek southeast of Asheboro and just before that, a Link-Belt LS 138 crawler crane was seen moving buckets of concrete into place. The crane was owned by APAC-Atlantic, Fine said.

“This is currently a really spread out project, but it will soon slowly start coming together,” he said. “Once all of our utility relocations are out of the way, which has been a massive chore, and the right-of-way acquisitions are complete — as well as the box culvert and bridge structure work — it will become a more cohesive project.”

He went on to say that crews have only cleared what is necessary just to get to the bridge and culvert sites. As the land is opened up further the rest of this year, the mass hauling will only increase.

The mild weather last winter also helped keep construction on schedule more than a year into the job, an extraordinary feat for such a large project.

Motorists Will Soon Get Relief

Fine himself must sometimes negotiate the long stoplights and heavy traffic along U.S. 64 to get from worksite to worksite on the project. He understands the frustration drivers can experience moving through the area.

“During peak hours, a lot of these signals operate at a very poor level of service, so what this project is going to do is alleviate some of that congestion and just provide a better and more appealing corridor for commuters and tourists. On Thursdays and Fridays during peak hours it is real difficult to get through town on U.S. 64.

“Hopefully, this project will change that by providing a high-speed controlled-access freeway on the U.S. 64 Asheboro Bypass with a speed limit of 65 miles per hour.”