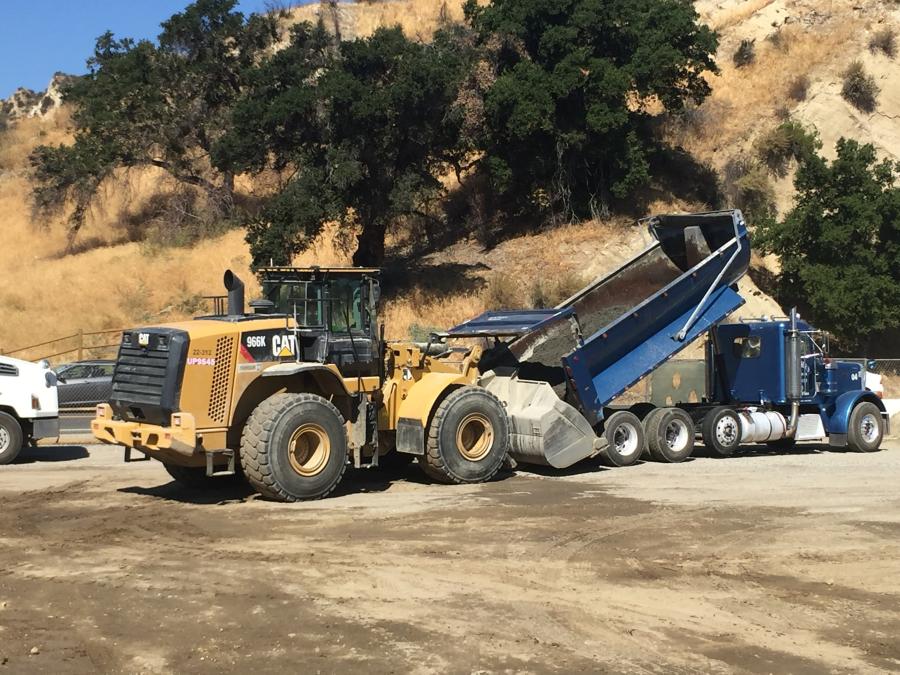 The I-5 Roadway Rehabilitation Project will replace concrete on 15.8 mi. of freeway from a mi. south of Route 14 to a mi. and a half north of Lake Hughes Road. (Caltrans photo)

Caltrans is conducting a $171 million project to smooth the drive on I-5 though Santa Clarita in northern Los Angeles County. The I-5 Roadway Rehabilitation Project will replace concrete on 15.8 mi. of freeway from a mi. south of Route 14 to a mile and a half north of Lake Hughes Road.

“This section of Interstate 5 has pavement that is more than 50 years old and no longer adequate for current and future traffic loads,” said Malcolm Dougherty, Caltrans director, as ground was broken on the project in late August. The project is expected to be completed in summer of 2019.

“Broken pavement and potholes are the primary problems, especially in the number three and number four lanes due to significant truck traffic,” said Michael Comeaux, public information officer of Caltrans District 7. “The original highway was constructed of concrete pavement as opposed to asphalt.”

Heavy usage also has taken its toll on the freeway.

“Population growth and increased traffic can justifiably be cited,” Comeaux said. “I-5 is the major connector between the ports of Los Angeles and Long Beach and California's Central Valley.”

Comeaux added that the project will reduce the need for future lane closures for pothole repairs. That will increase safety for motorists and Caltrans maintenance crews on the freeway.

Revenue for the I-5 project in Santa Clarita is provided through state and federal sources. The money is placed in an account called State Highway Operation and Protection Program (SHOPP), which is designated for the repair and preservation of the California highway system.

The new asphalt will extend the service life of the roadway and upgrade parts of the highway that are failing, worn out or functionally obsolete.

Caltrans reports that more than a million vehicles a week use the stretch of I-5. Driving north, the highway leads to what is known as The Grapevine, a steep 5.5-mi. grade at the southern end of the San Joaquin Valley.

Crews are working on the 15.8-mi. stretch in Santa Clarita mostly at night, between 9 p.m. and 5 a.m. on weeknights, while keeping at least one or two lanes of traffic open on most nights as the project progresses.

Once completed, the new surface will provide a smoother, safer drive for motorists and will reduce time required for future maintenance, which will minimize future lane closures and delays for drivers, Caltrans reported.

The section of I-5 being improved is mostly an eight-lane freeway, four lanes in each direction. However, it narrows to three northbound lanes just north of the I-5 and state Route 14 separation near the project's southern limit.

Prime contractor for the project is Guy F. Atkinson Construction of Irvine, Calif. Over the past 10 years, Atkinson has completed more than 50 transportation infrastructure projects totaling nearly $4 billion.

Atkinson Construction was selected through a bid process.

About 60 workers are on the job daily, with most of the work being done at night.

Crews removed old pavement from the three and four lanes of the 15.8-mi. stretch of freeway. They also are constructing new concrete pavement as the old pavement is removed.

Some of the removed concrete will be recycled for use on the project.

“Also, old pavement is being removed and replaced on individual slabs in the number one and number two lanes,” Comeaux said. “This work is being done on the northbound side and on the southbound side of I-5.”

The work on the southbound side will be done in four stages. It is currently transitioning from stage 1 to stage 2. On the northbound side, work is in stage 1.

To assure a smoother ride, concrete paving will be continuously upgraded in the outside lanes (lanes three and four). In lanes one and two, broken slabs will be replaced, and the full length of lanes one and two will receive profile grinding to ensure a smooth surface for vehicles.

In portions of the roadway with asphalt pavement, concrete pavement will be installed. The guardrail will be upgraded to the current standard.

In general, Caltrans plans to keep at least two freeway lanes open for traffic in the construction zone, except between midnight and 4 a.m. when at least one lane will be kept open for traffic. If a full closure becomes necessary for the safety of the public, it is the policy of Caltrans to provide adequate notice to the public before such a closure and to post signs giving drivers a satisfactory detour around the closure.

“Caltrans and the contractor are working to ensure that best practices are in place to minimize traffic delays, dust and noise, which have the potential to affect nearby communities,” Comeaux said. “It is worth noting that the project is in and near the city of Santa Clarita, the third largest city in Los Angeles County. There is significant commuter traffic on this segment of I-5 so Caltrans and the contractor work in close cooperation to minimize inconvenience to commuters, local residents and businesses that rely on this essential route.”

Noise levels will not exceed state and federal regulations. Still, Caltrans will monitor noise levels during construction to minimize the impact to local neighborhoods.

Nearby residents who experience excessive noise related to the project are encouraged to contact Caltrans.

No New Lanes … Yet

Construction of carpool lanes also called HOV or high occupancy vehicle lanes on I-5 in the area is anticipated under a separate project following completion of the I-5 Roadway Rehabilitation Project. Metro (Los Angeles County Metropolitan Transportation Authority), in cooperation with Caltrans, is conducting the final design for the proposed HOV lanes and extensions of the truck lanes along I-5 from state Route 14 to south of Parker Road in northern Los Angeles County.

Construction on the HOV lanes is anticipated to begin in 2019.