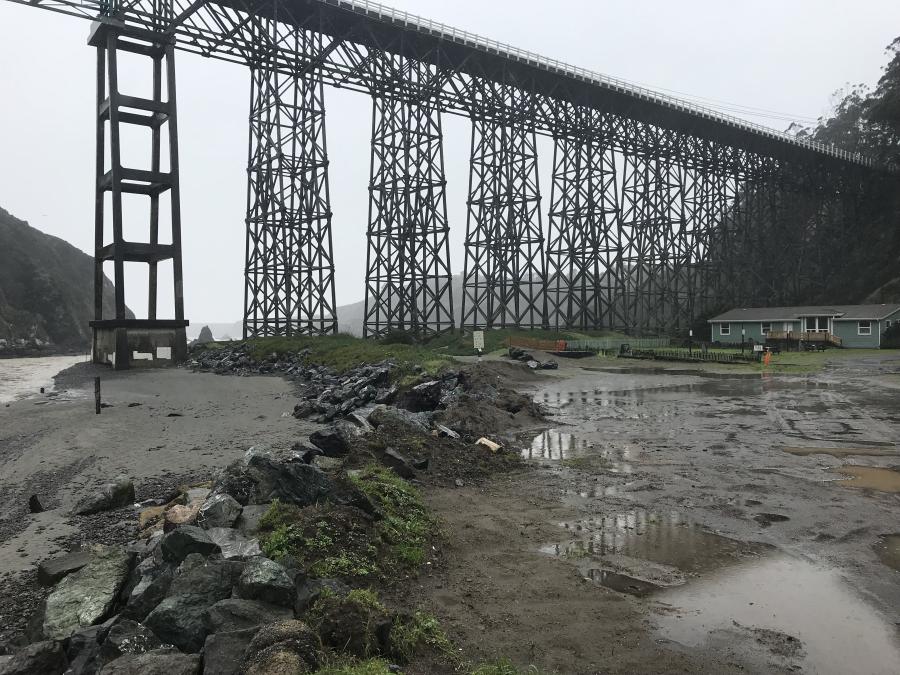 The Albion River Bridge’s existing structure constructed with Douglas fir timber is vulnerable to seismic events and takes up a significant footprint on the beach with its timber towers.

The California Department of Transportation (Caltrans) is currently reviewing rehabilitation and replacement alternatives for the Albion River Bridge Project in California's Mendocino County. The 969-ft. long, 26-ft. wide timber bridge constructed in 1944 does not meet current safety standards and demands high maintenance costs. It sits above the Albion River at approximately 140 ft. As the last standing wooden bridge on Highway 1, it has earned a spot on the National Register of Historic Places and the California Register of Historic Places. But its aging structural condition causes concern for Caltrans, and the team has had several other challenges on this project, foremost being local community opposition against replacing a bridge that many consider integral to the area's history.

"Overall the bridge is iconic and the community members who are opposed to the project feel that the existing bridge defines them as a unique coastal community," said Project Manager Frank Demling, who has worked with Caltrans for three decades. "They believe the bridge should continue to be maintained rather than replaced." Every other year, Caltrans has a contractor replace bolts and rotten timbers as part of maintenance activities to keep the bridge functional. But the cost escalates over time and repair work impacts the traveling public, requiring traffic control and, in some cases, full closures. In the long term, Caltrans views it an unsustainable exercise in maintaining a structure at a high cost with limited years of service. 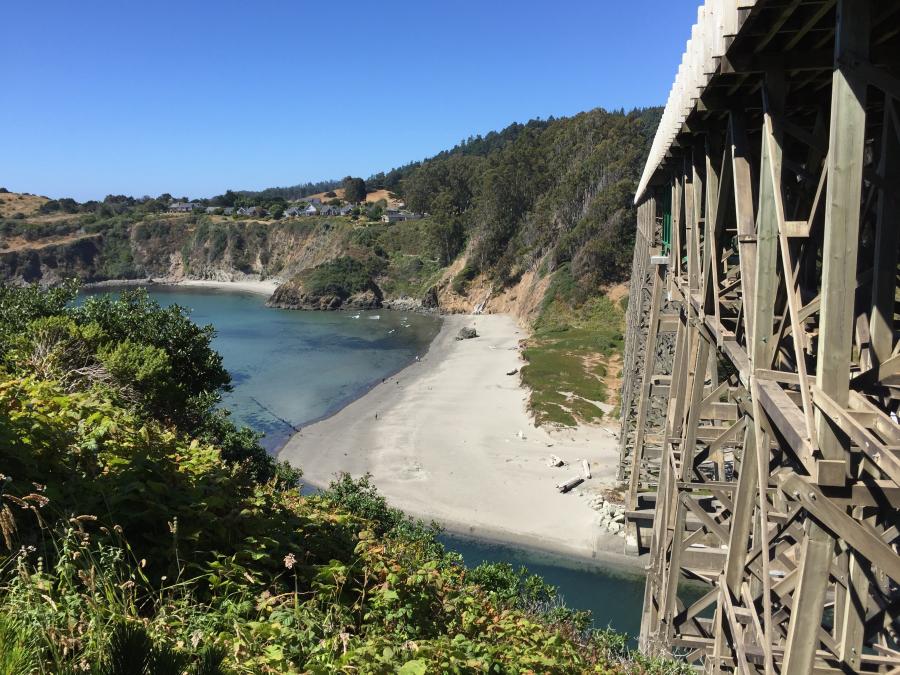 its timber towers. The wood is treated with arsenic and hexavalent chromium, which is leaching into the environment, resulting in an acceleration in the rotting timbers. Not all timbers leach chemicals at the same rate, leaving only a probable estimate on the number of years of service possible for the bridge. Currently, that time frame is 10 years. While this structure does not provide for the multi-modal needs of the public, the new bridge will feature 6-ft.-wide shoulders to accommodate cyclists and disabled vehicles, and a 6-ft. separated pedestrian walkway on the westside.

The primary benefit will be safety and reduced maintenance costs. The cost for Construction Capital and Right of Way Capital is $60 million, with a service life of 75 to 100 years, if not more. The only maintenance involved in a concrete structure is repairing the bridge joints and treating the concrete deck every few years to prevent water intrusion. California Coastal Commission staff's bridge type preference would be an arched bridge resembling many of the bridges constructed along the Calif. coast. This will afford a much smaller footprint and better visual character. Though the project was first initiated in 1999, Demling was assigned to it in 2012. He expects to advertise the project in May 2023, go to construction about June 2024 and aim for completion in October 2026.

In 2017, approximately 800 bolts on the Albion River Bridge were replaced. This year, 1,100 bolts will be replaced and there are a number of rotten timbers that need to be repaired. The process for repairing rotten timbers involves digging out the rot and injecting the void with an epoxy resin. There are also 53 timber scabs to be replaced, but because of the location of said scabs, work isn't planned until next year as it requires full closure for 20 non-consecutive days at night on the bridge. Given this is a timber bridge, there aren't a lot of contractors bidding on these types of repair projects and there is no special equipment involved. Caltrans District 1 had a maintenance crew that ,up until 2017, was responsible for performing all of the maintenance on the bridge, but because of the extent of work required, had to advertise and award a contract to a private contractor. The department received five bids for the project. The 2017 Albion Maintenance project was awarded to Bugler Construction, with the apparent lowest bid at 1.47 percent ($17,782.20) under the engineer's estimate (EE) of $1,210,044.20. The company also bid 70 working days for this cost plus time contract, which was within the specified range of 70-to-100 working days.

One of the key concerns for Caltrans though is the condition of the internal shear rings which carry approximately 60 percent of the load on the bridge. The internal shear rings (split ring and toothed ring connectors) in all existing timber connections cannot be accessed for inspection. They can only be accessed by dismantling the connection. Most of the connections have never been dismantled and the integrity of the internal shear rings is unknown. A partially exposed shear ring observed during a regular inspection showed significant rust. "This is a marine environment and water intrusion into those joints has an impact," said Demling. "In our follow up maintenance project next year, we will open three major connections to get a look at internal shear rings." The sampling will help determine if they're in as poor shape as believed. If yes, Caltrans may have to accelerate the replacement project. The project development team will seek recommendations from the Office of Earthquake Engineering, Structures and Maintenance Investigation and the District Program Advisor, as to whether or not the bridge should be closed to one way reversing traffic and possibly install earthquake warning devices. 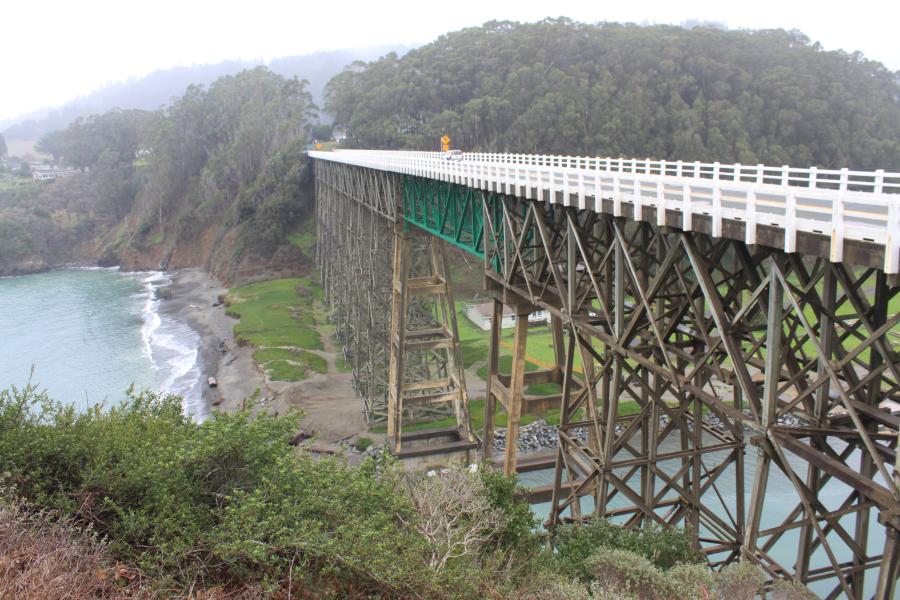 Another factor with the Albion River Bridge Project is the environment where work must occur. "We are in a very complex environmental setting on the coast," said Demling. "This is a sensitive habitat for endangered butterflies, so we have requirements by the National Fish and Wildlife Service to identify and update botanical surveys. Gaining access to adjoining parcels to conduct environmental studies posed an obstacle when a few property owners opposed the project and Caltrans had to negotiate permits to enter so botanists and biologists could conduct their studies. A geotechnical survey was also completed in early 2019. Upcoming plans include updating botanical studies and butterfly surveys in spring and summer and having a draft project report and draft environmental document ready to circulate by April of next year.

"We are in the ‘0' phase now, which is the preliminary design and environmental studies toward developing a draft environmental document for circulation," said Demling. The project development team will make recommendations to select a preferred alternative after comments received on the draft environmental document have been addressed. There are three replacement alignment alternatives being considered with a combination of different bridge types depending on the geometric constraints and construction techniques. "We recognize the bridge is an iconic structure and it's important to the community, but the Albion River Bridge is entering a state of accelerated deterioration. You don't want to be put in a position where you are planning a replacement structure at the very end of its service life, the time to plan is now." CEG