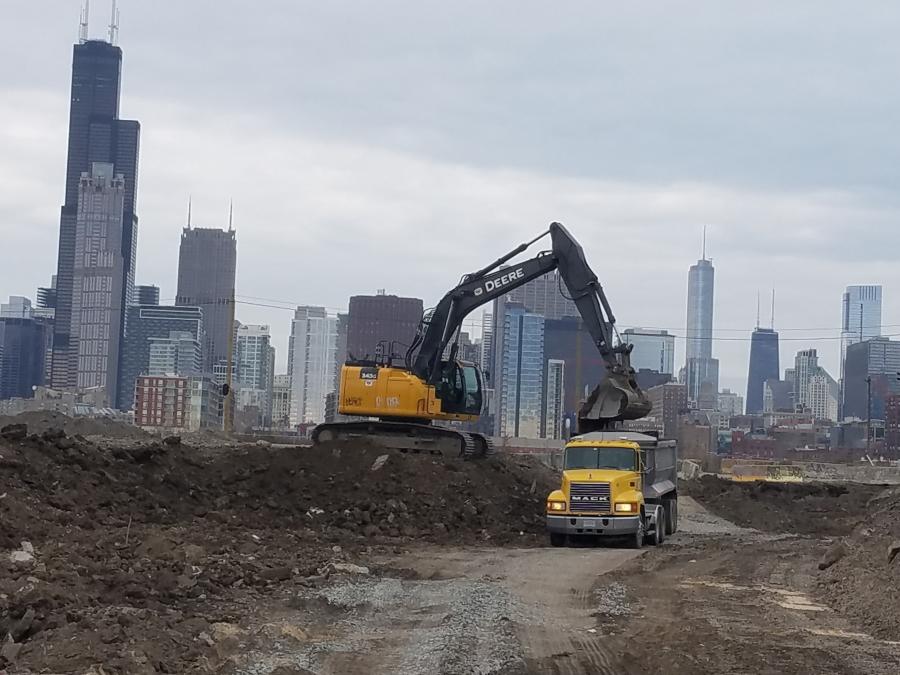 In Chicago, Ill., work continues on the final phase of a project that will create a new road between the Loop and Chinatown. Section 3 involves construction of a segment of Wells Street extending from Roosevelt Road to 16th Street, resulting in a new north-south through-street between Clark Street and the South Branch of the Chicago River.

"This area embodies the rich history of Chicago, as it includes both the Chicago River and the railroad lines that made the city a national hub for trade and commerce, as well as Chicago's historic Chinatown neighborhood," said Bridget Stalla, Chicago Department of Transportation (CDOT) project manager. "However, the vacant acres in between the South Loop and Chinatown have acted as a barrier that the Wells-Wentworth Connector will eliminate.

"The project fulfills one of Daniel Burnham's goals, by creating a new north-south connection between the city's Central Business District and Chinatown, fueling growth in both areas, as well as along the South Branch of the River." 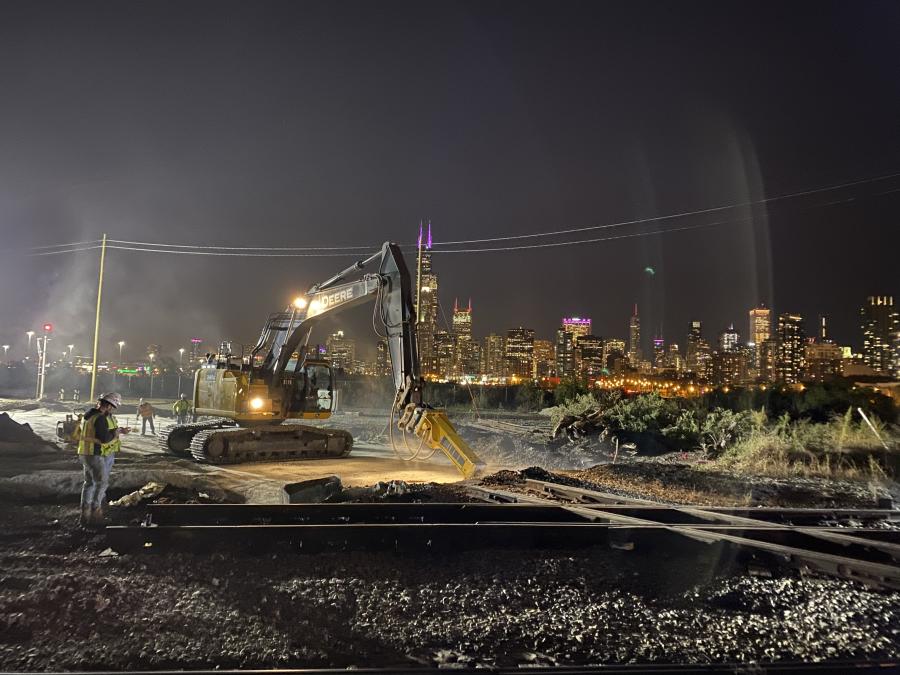 The approximately $89 million Wells-Wentworth Connector undertaking will offer safer travel options for motorists, bike riders, commuters and pedestrians. It will add a new traffic signal at 18th and Wentworth, new sidewalks on both sides of the street and a buffered bicycle lane.

The work is being carried out in phases because although funding was available to construct everything at one time, land availability, approvals from utilities and advance work precluded start on the second project with the first. The third required additional time to work out agreements for the dedications and construction agreements with developer Related Midwest, Chicago Park District and the four railroads where two bridges are being built underneath.

WSP is the construction management consultant working for CDOT. F.H. Paschen is the prime general contractor for Section 3, while Sumit Construction was responsible for Section 2. Capitol Cement Company was selected for Section 1 work.

For Section 3, Stalla said there is currently very little impact to the adjacent public and surrounding communities.

"The nature of the project existing in a 62-acre empty field surrounded by railroads, the river and an arterial overpass provides less interface for regular construction impacts to the surrounding area.

"The haul roads for the north and south site entrances, Wells Street and Wentworth are cleaned regularly by the contractor. There will be upcoming 24-hour overnight bridge work scheduled for strategic railroad outages to build bridges without interrupting freight and Amtrak service. These events will be coordinated with the community to provide notice and resolve possible impacts."

The ongoing construction ties into the development of "The 78", with the intent of making the area Chicago's 78th neighborhood by creating a residential mixed-use development. Located between 18th Street to the south and Roosevelt Road to the north, and flanked by the River and Clark Street, the development will contain plazas and residential highrises, connecting to segments of Chicago's Riverwalk and Ping Tom Park, Chinatown's waterfront park. Multiple transportation improvements will include interior roads, improvements to the Clark Street ROW and a new CTA station for the Red and Orange transit lines. 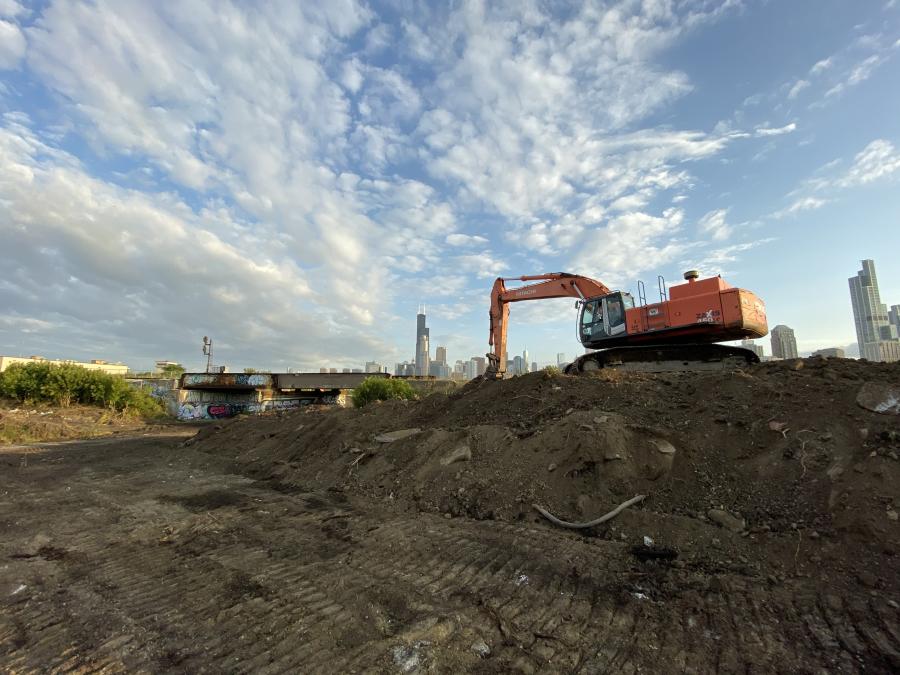 Stalla noted that the site was at one time actually in the Chicago River, and was part of a master land plan.

"The Chicago River was not always located where it is today. Prior to 1930, it meandered in a natural oxbow located next to Clark Street within much of the site. In the early 1930s, it was moved approximately 900 feet west to its current location, filling in the existing river bed with sand from Lake Michigan.

"You can still see evidence of the old river alignment on aerial photos of the site. After the river was moved, the land was used extensively as a railroad yard and freight area, but even today the plans for the site are impacted by the location of the former river, given the infill used and natural topography."

Some of the biggest challenges on the project have included coordination with railroads, numerous agencies and the developer on its ongoing planning, design and scheduled construction, as well as dealing with unforeseen buried obstructions, such as the 14th Street brick sewer, Roosevelt Road foundation, additional foundations on Wells and unidentified existing utilities. Soil conditions from the existing infill along the riverbank also have been a concern for crews, along with high public exposure, which creates little margin for error regarding public perception.

The property involved an open field, remnants of old building slabs and foundations, overgrowth and existing rail lines branching out of the 16th Street interlocking. The developer, Related Midwest, had one stage structure built near the center of the property and several Conex containers for marketing of the project. 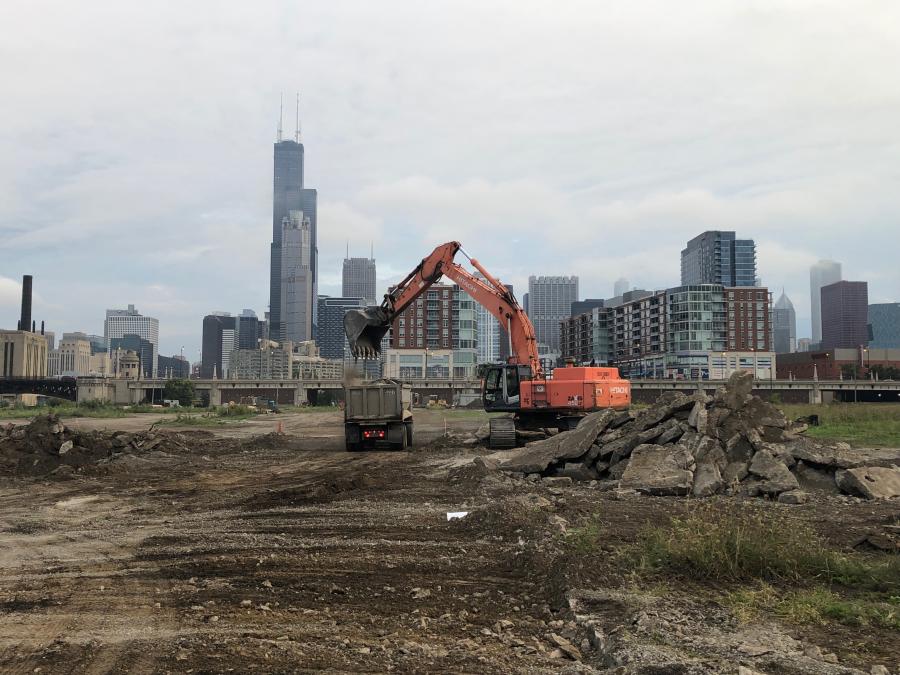 Section 3's construction of a new segment of Wells Street extending from Roosevelt Road to 16th Street will create a new north-south through-street between Clark Street and the South Branch of the Chicago River, linking the South Loop to Chinatown. This calls for construction of two replacement railroad bridges under live track service for each rail line, the St. Charles Airline and the Freeport Sub line.

"This involves a handful of 24-hour track outages to complete the work without compromising regular service, and includes onsite erection of two temporary structures and two permanent structures to sequence two bridge "roll ins" within the outage windows," said Stalla.

Mass excavation also is required, as well as concurrent installation and sequencing of utilities totaling more than 5 mi. of infrastructure across the half-mi. of roadway for nearly a dozen different utility infrastructure groups to serve the entire redevelopment. The work involves roadway construction and landscaping within the road corridor.

Most of the mass excavation work is related to the lowering of the ground level to go under the two railroad lines. Approximately 60,000 cu. yds. of earth will be excavated and removed. This is equivalent to about 6,000 truck loads of material. In addition, there is extensive removal of concrete foundations, pavement and walls from the historical development of the site. 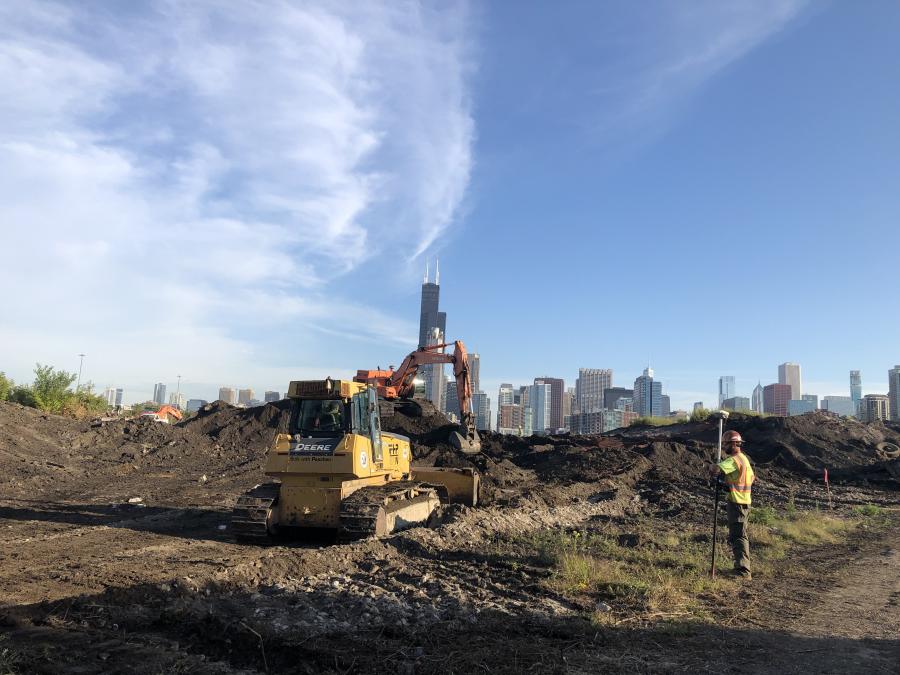 So far, weather has not been a factor in construction. Much of the work can continue during the winter months, with proper precautions to protect the site.

Phase 1 of the project, completed in 2016, widened the existing right of way to incorporate new sidewalks on both sides of Wentworth Avenue between 17th Street and 19th Street. It also added a buffered bike lane and improved pedestrian and bicycle access to the Ping Tom Memorial Park Fieldhouse. Stalla noted that work on Section 2 is essentially finished.

"It's very rewarding to see the new alignment in operation, and many locals have commented on how great the improvements have been."

Looking ahead to the completed project, "By creating direct road, transit and bicycle access to Chinatown's thriving commercial center, we hope to strengthen the community's identity and economy," she added. "These improvements will make Chinatown more pedestrian and bike friendly, while bringing new economic opportunities to a growing and vibrant community. CEG