Contractor Finishes Hwy 371 Ahead of Schedule 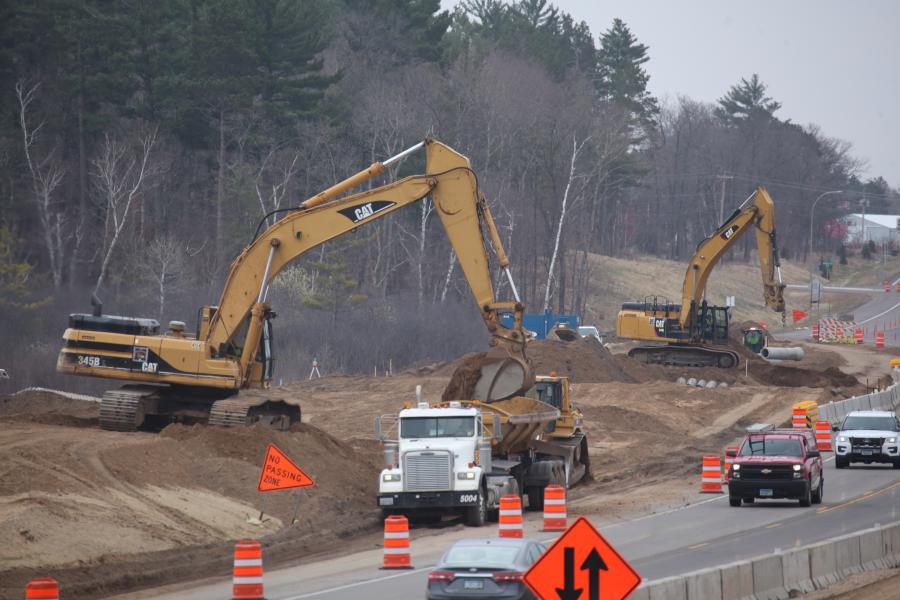 In the heart of the state’s north central lake country, one of its more popular lake recreational areas, road crews of Mathiowetz Construction have brought new life to a very crowded and active lake country highway.

Minnesota is the state of 10,000 lakes and millions of water enthusiasts.

In the heart of the state's north central lake country, one of its more popular lake recreational areas, road crews of Mathiowetz Construction have brought new life to a very crowded and active lake country highway.

Here, once was a narrow stretch of TH 371 threading its way through a half dozen lakes between the small tourist towns of Nisswa and Jenkins, road crews recently completed the rebuild of this highway from two to four lanes over 9 mi. of pavement one month ahead of schedule.

Crews worked through two summer vacation seasons under traffic conditions and kept vehicles flowing through the work zone safely on this highway where ADT counts swing upwards from 12,700 to more than 20,000; an increase of nearly a million vehicles more on this pavement each season.

Statistics supplied by the Minnesota Department of Economic Development further support the popularity of this part of the state dotted by small towns and just a little more than a two hour drive north of the three million plus residents of the St. Paul/Minneapolis metro area.

More than a quarter billion dollars in gross sales is spent throughout this area; bringing in $14 million in sales tax and creating more than 4,000 private sector jobs.

The Minnesota Department of Transportation (MnDOT) awarded the $49.9 million contract to Mathiowetz Construction based out of Sleepy Eye, Minn. The company is a fourth generation heavy highway contractor in business since 1924 specializing in earthwork and underground utilities.

With the volume of traffic during the peak summer months, “we were having a lot of issues with crashes and with the no passing zone on the highway, drivers became frustrated and made moves that were not good ideas,” Hughes said.

The two year irritation of dust, noise and traffic inconvenience that came with the work will make the wait for visitors and residents worthwhile as the project comes to an end.

Four lanes are in place to handle the summer traffic crowds and make passing much safer and congested traffic less of a problem. At Pequot Lakes, the highway now runs along a new alignment 4 mi through the open fields and woodlands a half mi. east of downtown.

Hazardous intersections have been eliminated at three county road crossings and replaced by completely new geometrics for this part of the MnDOT highway system.

In Pequot Lakes, a new interchange and bridge now carries County Road 11 traffic over the new four-lane highway. It is a busy crossroads because the county road connects the new highway to the downtown area and is also a major route to Breezy Point, a huge and very popular lake resort 13 mi (21 km) to the east.

New roundabouts sit at each end of the bridge to move traffic through the ramp intersections more efficiently.

The four-lane highway expansion forced a new alignment of the Paul Bunyon Trail, a popular pedestrian, bicycle and snowmobile trail running parallel to the road. This work included the construction of a trail bridge to carry trail users over the new highway alignment and a prefabricated steel bridge bringing the trail over a wetland.

To get to this point, dozens of pieces of primarily Cat equipment moved in including scrapers, D9, D8, D6 dozers, 345 and 349 packers, 40-ton off-road trucks, motorgraders and several packers to grade and transport material.

Crews worked 12 hour work shifts the first four days of the week and closed down mid-afternoons on Fridays to move out of the way for the heavy volume of weekend traffic.

The MnDOT and Mathiowetz team are pleased with the results and the coordination and effort that brought this project to the end.

“Construction has been going extremely well. It's a design-build project, the first one our office has done, so that was a little bit different; starting up before the plan was done. The contractor has been working well and was ahead of schedule. It's been well received by the public.

“Talk of the project began in 2002 with community involvement so we have been working together, coordinating with the residents and businesses all along and that has gone extremely well,” Hughes said.

“It was a good job overall. Everyone worked well together,” said Dave Domm, Mathiowetz project manager. “The Mathiowetz construction team and MnDOT team got along fabulously and MnDOT's Tony Hughes did a fantastic job helping to keep the ball rolling. I look at it as a very, very successful job.”

Domm further recognized the Mathiowetz team who worked on the project and Randy Shoen, Mathiowetz project manager who managed the project through its second year of construction.

Administratively, Hughes said that one the challenges on this project, was “learning or working through the design-build process, working with the design team at the same time construction is happening in the field, making sure everything is coordinated.

“It's been interesting and a challenge just to manage all that,” Hughes said.

Because the new highway required 90 mi. of utility relocations and runs through and around a series of lakes and wetlands, it was a project dominated by erosion control and moving massive amounts of dirt.

“This project is very environmentally sensitive because it's going through a lot of lakes and wetlands along the corridor. We worked with the contractor on erosion control techniques. I think it has gone extremely well; better than I anticipated,” Hughes said.

With roughly 134 acres of clearing and grubbing, it was a project requirement that mulch from the trees removed was used to create berms through the more sensitive areas, Hughes said.

“Environmentally, it was a very challenging job,” Domm said.

“As part of this contract, along with all the tree removal and clearing and grubbing, we chipped up all the wood and used it for erosion berms. We surrounded all the wetlands, all the slews, all the areas with steep grades with 3 feet berms.

“This worked very well and was a very innovative way by MnDOT to make use of the natural resources available,” Domm said.

The sandy soil conditions, though not new to Mathiowetz Construction, were different than working in the cohesive, clay soil of southern Minnesota and worked to the advantage of the work schedule during rain days.

“The sandy soil is tough on compaction because you have to add so much water on it,” Domm said. At the same time, “it was kind of nice because when it rained in southern Minnesota, we would have to quit. Up here in northern Minnesota, all we have to do is shut down the water trucks and keep going. It was very rare that we were rained out.”

The geology of the sand also raised another interesting issue for Domm. As crews built the stormwater detention ponds, a specification now on all MnDOT highway projects, site monitoring showed that the water was draining too fast to clear out the contaminates.

“Because of the sandy soil, it was getting rid of the water too fast so we had to mix in topsoil and different materials to slow down the drainage,” Domm said. The specification is that the “water per our design had a maximum drainage rate of 8 inches per hour. In some of the ponds, we were reaching 60 inches per hour in the coarse sand. So, we had to slow it down.”

Mathiowetz phased the project to move most of the utilities and complete the new alignment wrapping around the east side of Pequot Lakes first. With that schedule, crews were able to build the new County Road 11 bridge and connection to TH 371 first.

To maintain access to Pequot Lakes, a section of the new southbound lane was used to detour traffic around the bridge construction.

“We had about 12 different utility companies relocating approximately 90 miles of utilities including power, telephone, gas and fiber that had to be coordinated along with the grading operations. That's always fun,” Domm said about the utility relocation coordination. “We had to jockey our work zone around a little to give them time to move their facilities.”

Coinciding with most of the utility work completed, pavement was down and ready to carry traffic on the two northbound lanes running on the east side of Pequot Lakes by late summer of 2016. They served as a temporary two lane highway while crews built the remaining southbound lanes this summer as well as all frontage roads and intersection hook-ups.

To build the new highway through the woods and open land on the east side of Pequot Lakes, Cat equipment dug out approximately a 40 foot cut to bring the road through a small rise in the landscape. That material was hauled north of County road 11, about a half mile away, to fill in a ravine.

“This is where the largest portion of the dirt was moved for the project,” Domm said. “About a mile long stretch around County road 11.”

Near the south end of the project as the new, four lane road cuts in between Lower Cullen and Fawn Lakes, Mathiowetz Construction opted for the prefabricated steel bridge to bring the realigned recreational trail over the wetlands located there.

“With the new divided highway alignment moving to the east, the existing Paul Bunyon Trail was pushed out over a wetland area. So, instead of mucking all that out, there was roughly 35 to 40 feet of peat and muck in there, we felt it was better for the environment to build across it,” Domm said.

Crews faced similar conditions south of here where the new northbound lanes across Cullen Brook were moved to the east and extended north through very poor soils up to 25 feet deep.

“With this being a very environmentally sensitive area, we decided to dewater the existing material rather than trying to remove it all and replacing with granular material,” Domm said. “We laid fabric down, brought in about 4 feet of wood chips to gain access then placed wick drains to allow the material to dewater and consolidate faster. We built the road and placed a 15 foot surcharge on it to help with settlement.”

Electronic monitors were used to determine when the soil was stable enough to remove the surcharge and continue with the road construction.

Just north of Nisswa at the south end of the project, an existing box culvert carrying the highway over Cullen Brook connecting Lower Cullen and Nisswa Lakes, was removed and replaced to carry the expanded road width.

“We decided on a three sided box culvert sitting on footings and held up by piling driven approximately 90 feet deep to allow for a natural stream bed. It was done in two stages to allow traffic access at all times and done in conjunction with the soil dewatering,” Domm said. “As the roadway became stable, we were able to install the three sided box culvert.”

As the project winds down, feedback on the improved highway from the community has been positive, said JP Gillach, MnDOT communications officer.

“All indications are that this project has been very well accepted. The dedication of the design-build team to put the customer first, communicate well and respond quickly throughout construction, we've had very, very few complaints overall.

“One of the more impressive pieces of work I've seen is the planning and public involvement work that's occurred with the city of Pequot Lakes since the project transitioned into construction. I'd say it's an example of government at its best” Gillach said.

Nancy Malecha, city administrator of Pequot Lakes said that with the completion of the new highway, “we will have three gateways into our city which presents opportunities for our community. It will allow our city to become a safer, more robust bikeable and walkable community for our families.”