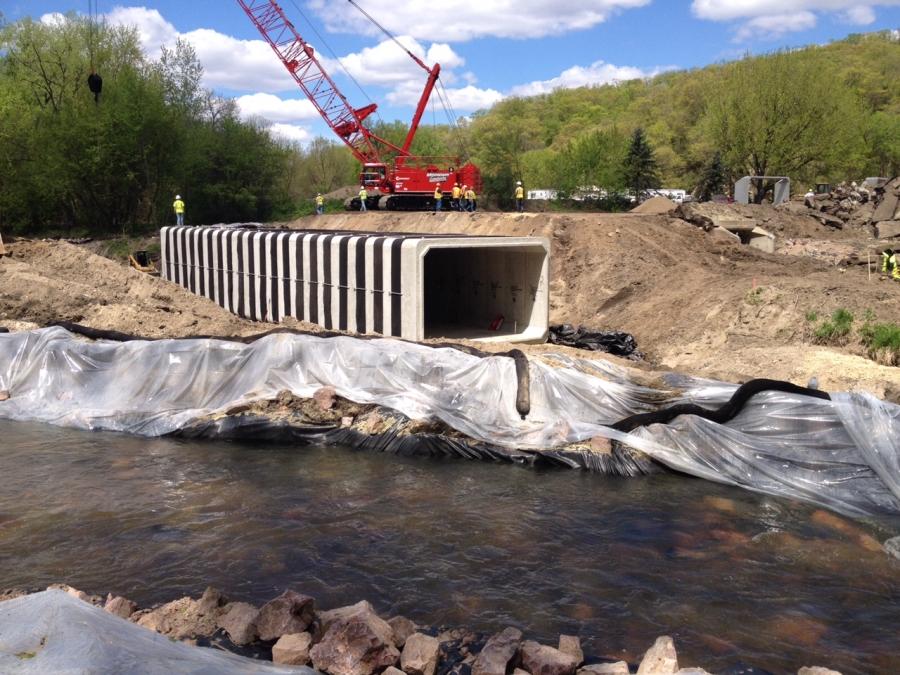 Road crews recently capped off the third and most challenging piece of a three-year project to raise 3 mi. (4.8 km) of road surface of a southwestern Minnesota highway above the 100-year flood mark to thwart habitual flooding by the Minnesota River.

Road crews recently capped off the third and most challenging piece of a three year project to raise 3 mi. (4.8 km) of road surface of a southwestern Minnesota highway above the 100 year flood mark to thwart habitual flooding by the Minnesota River.

Complementing the raised pavement, 9 mi. (14.5 km) of this stretch of highway has new concrete end to end, improved drainage and all new signs. All the removals were put back into the job and many of the trees cut down were ground up and used to stabilize the job.

Along the entire length of the road work, safety was beefed up by adding a combination concrete barrier and high tensile guardrail through this narrow stretch of highway to prevent head-on crashes; of which there were 38 in the past ten years.

Mathiowetz Construction based in Sleepy Eye, Minn., completed the work 30 days ahead of schedule. It was an injury free project despite battling a wet summer, complex construction phasing and working in some very narrow space between the bluffs of the Minnesota River Valley and the river.

With the advanced completion date, the company earned the contract incentive to have traffic rolling on all four lanes by late September last year and an Outstanding Performance Award from (MnDOT).

To bring the project to an end, road crews closed this busy stretch of highway for five months. Carrying an ADT of nearly 18,000, the highway is a popular connection between the cities of Mankato and St. Peter that have a combined population of 51,800. It serves as a key commerce and agricultural route between the Twin Cities and south central Minnesota.

The road closure forced thousands of vehicles to be routed to a more rural, quiet two-lane highway. Safe traffic control and access for the residents of two dozen homes located directly inside the construction zone combined with a very thorough communications plan were key goals that had to be met.

Once traffic was detoured, truckers rolled in and dumped tons of fill to raise the low lying sections of road above the high water mark of the flood volatile planes of the river valley.

At $30 million, Mathiowetz Construction took on the largest of three contracts (MnDOT) awarded to resurface TH 169 and raise the pavement through a 20 mi. (32 km) stretch of the highway.

Martin Mathiowetz founded the company in 1924. It grew from simple beginnings providing maintenance services to the local agricultural community, to a 160 employee company with more than 300 pieces of heavy equipment.

MnDOT project manager Peter Harff, P.E. said last season's work was a huge project for the time allotted where success pivoted on the known and unknown. As he explained, “it depended on either being real lucky with the weather which we decidedly were not or on a smart, innovative approach to construction staging which is what we had!”

Mathiowetz project manager Randy Huiras and Harff agree that teamwork between the construction crews and MnDOT staff was a major force to delivering this project ahead of schedule despite its under lying complexities.

“MnDOT and Mathiowetz used partnering on this job and that went well. That's what hit the homerun on the job,” Huiras remarked.

“They were moving people and equipment around continuously. They moved the concrete paver around a lot just in response to what they could get done,” Harff said. “We were concerned that if work wasn't coordinated well, people were going to be completely landlocked. It was a true partnership and our construction staff is to be applauded for helping build that relationship with Mathiowetz.”

With safety a priority, Mathiowetz crews and sub-contractors worked long hours to keep the momentum moving forward to stay ahead of schedule and keep the crews and traveling public safe.

Combined with dozens of pieces of equipment on site, “on average there was anywhere from 75 to 100 people on the job working sunrise to sunset. It was a zero injury job, no accidents. It was a safe project which is another milestone that work crews met,” Huiras said.

“This was honestly what we prayed for,” said Harff. “When you divert that much traffic to a rural area, you know there are risks and we knew if we tried to build under traffic conditions, the risks were going to be significantly higher.

“The fact that the traffic went smoothly from day one, that we didn't have any crashes, that the contractor was able to get this done despite terrible weather and just the general support from the public responding to the traffic issues without too many complaints; it went better than we had hoped for.”

According to MnDOT documents, since the highway was first constructed in the 1960s, periodic flooding has always been a problem. When the river begins creeping up to the highway surface, (MnDOT) crews are forced to shut the highway down; causing inconvenient detours for anyone on wheels.

Flooding on this part of the highway has become more vexing to MnDOT officials. Over the last 21 years, eight of the twelve most extreme floods have closed the highway; with four closures occurring just over the last five years.

The three-year project to raise the highway and replace deteriorating pavement began in 2014 and was broken out into three separate contracts.

The first two years of construction covered approximately 10 mi. (16 km) of flood mitigation and road improvement work between the cities of La Sueur and St. Peter.

Unlike last year's construction, traffic kept rolling on TH 169 through the first two years of work because only two lanes of road surface were raised.

Last season's work required raising all four lanes of the highway because of very little separation between opposing lanes and tight space between the bluffs and the river.

Working under traffic conditions was not an option, Harff said, because construction space was narrow and would have increased the risk of accidents and extended the construction into another season.

To meet a major environmental deadline, Mathiowetz crews hit the site last February to complete the clearing and grubbing work before April to avoid disturbing the spring roosting season of the Northern Long Eared Bat, which is a federally endangered species.

Working under traffic conditions and in very limited right-of-way, equipment and crews removed hundreds of trees to make room for the additional fill required to raise and widen the road.

Going into March, as the clearing and grubbing work continued, a second team of Mathiowetz crews moved in early to begin removing pavement.

Taking advantage of the mild weather, “we chose to start early at our own cost so we could complete the job on time. We started work on the inside lanes and kept traffic moving on the outside lanes,” Huiras said.

“We went into some of the box culvert areas which are the flood prone areas in early April going into May in an attempt to get to them before the spring rains started,” Huiras said.

However, the weather turned against the crews.

Weeks later with a good start behind them, Mathiowetz crews moved into high gear.

Rolling the dice that heavy spring rains would not drown the early start and with plenty of advance publicity behind them to alert the public of the impending construction, Mathiowetz crews closed down all 9 mi. (14.5 km) of highway in late April and dug in.

Once the highway was shut down, the contractor had 150 days to remove the detour and open the road to traffic. Wasting no time, a heavy duty roster of workers and equipment took over and began tearing into the road. Supporting upwards of 100 workers on any given day, dozens of pieces of heavy equipment roamed throughout the entire length of the construction site.

On the technology end of the job, a majority of the Cat equipment used GPS equipment. The concrete contractor, Concrete Foundations Inc. based out of Hampton, Iowa, used string less paving for the road profile, “which is not real common in the state of Minnesota,” Huiras said.

Some of the major quantities confirm the labor, equipment and recycling effort that went into completing this project.

It was a multi-faceted, non-linear project that called for complex scheduling.

“When you figure concrete cure times of five to seven days, there was a lot of scheduling done the day before on routing drivers around. It took a lot of effort on everyone's part to coordinate access in and out of the job,” Huiras said.

Transcending all of the complex coordination, long hours and dust raising, work producing noise was a communications plan that worked and worked well both MnDOT and Mathiowetz staff said.

Besides running a series of open houses throughout design and construction, Rebecca Arndt, MnDOT public information officer attributed much of the publicity success to three short and simple videos posted on the Facebook page.