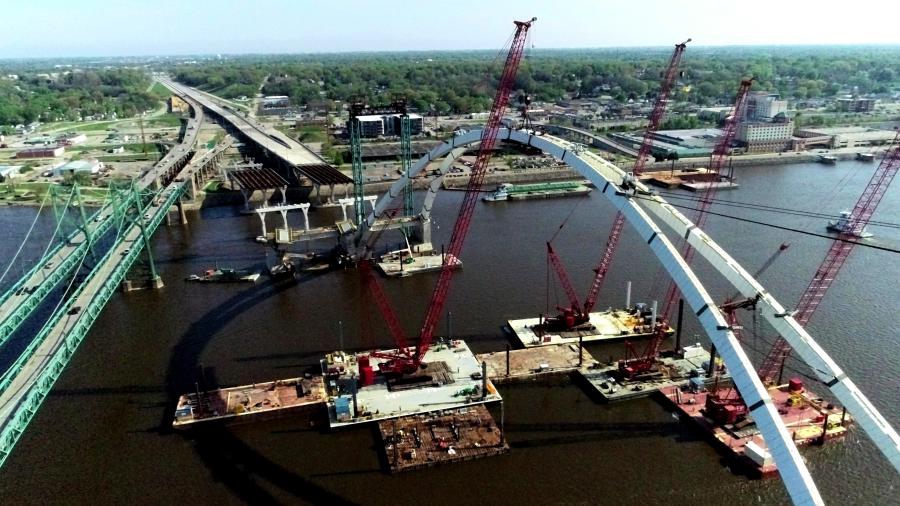 The I-74 Mississippi River Bridge project is part of an overall plan to improve the I-74 corridor from Moline, Ill., to Davenport, Iowa. (Iowa Department of Transportation photo)

Crews are well into construction of the second arch of the I-74 Mississippi River Bridge.

Construction of the new bridge began in July 2017. The westbound bridge is anticipated to be completed by the end of 2020 and the eastbound bridge in 2021. The new bridge will be more than twice as wide as the existing bridge, providing four lanes in each direction. 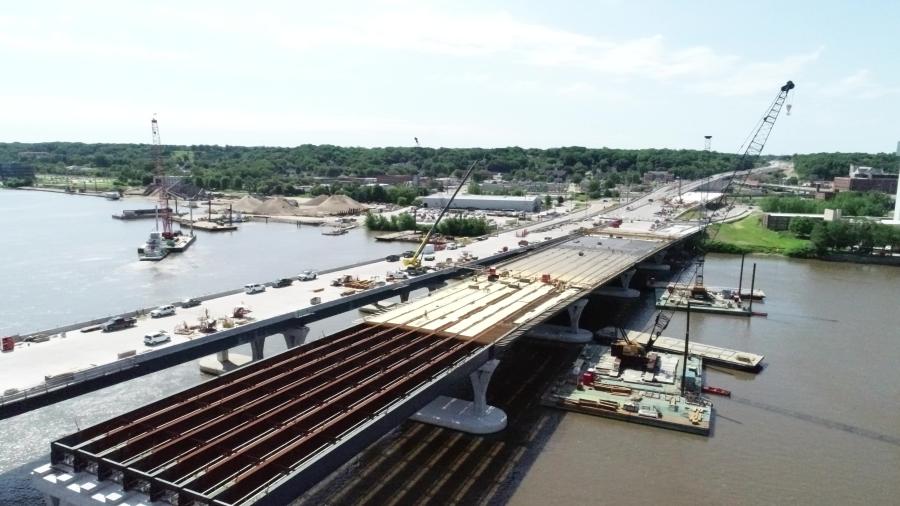 The full dollar amount of the overall project is estimated at $1.2 billion.

The I-74 Mississippi River Bridge project is part of an overall plan to improve the I-74 corridor from Moline, Ill., to Davenport, Iowa. From 2017 to 2021, construction is taking place between Avenue of the Cities in Moline and Middle Road in Bettendorf.

The project includes the replacement of the I-74 bridges over the Mississippi River as well as interchange ramp reconfigurations and local roadway improvements.

The prime contractor for the bridge project is Lunda Construction Company. 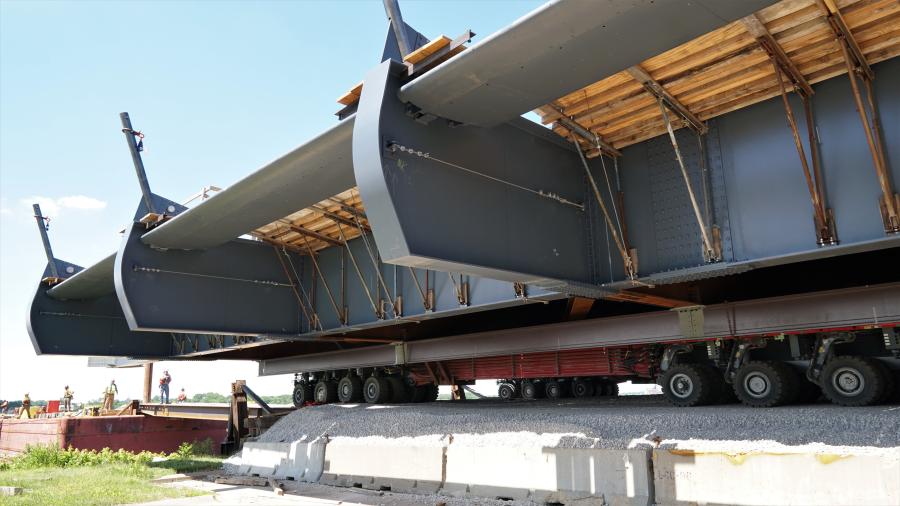 The I-74 Mississippi River Bridge project is part of an overall plan to improve the I-74 corridor and access across the river. The project includes the replacement of the I-74 bridges over the Mississippi River, expansion of I-74 to three through lanes in both directions, interchange ramp reconfigurations and local roadway improvements.

According to George Ryan, I-74 corridor manger, Wood Environmental and Infrastructure Solutions Inc., several challenges have been encountered in the project.

"From ice to rising river levels, working in the river requires significant patience and endurance," he said. "The construction of the basket-handle, true arch is one of the most complex activities on the project. It requires extraordinary precision and effort given the geometric details of the basket-handle shape and requires a great deal of coordination, including delivering materials to the project site, preparing the foundations to receive the steel segments of the arch, connecting the segments, etc. The last segment — the keystone — for the first arch was installed on May 6, 2020."

"Bolting of the keystone has been completed and the stay cables were relaxed and then removed," Ryan said. "The basket-handle arch for the westbound bridge is now freestanding. While there is much to be done before the first vehicle crosses the new westbound bridge, seeing the arch stand tall across the Mississippi River for the first time was an historic moment for all." 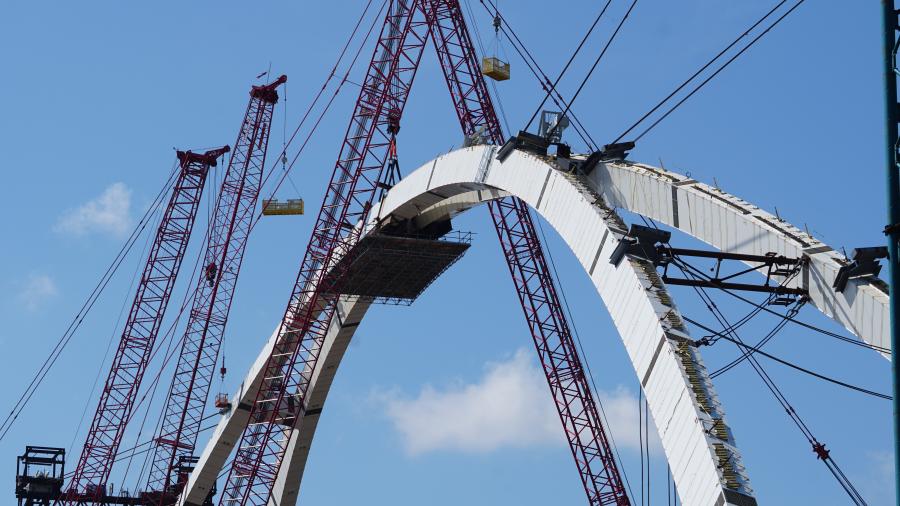 He noted that the keystone consists of two steel arch segments connected by struts. The keystone weighs approximately 215,000 lbs. (112.5 tons) and was lifted into place by a Manitowoc 650 crane with a 341-ft. boom.

"The process for installing the keystone required extensive preparation to ensure the correct fit," Ryan said. "A work platform was installed below the gap in the arch to facilitate installing a series of struts and jacks between the basket-handle arches. The struts and jacks, along with the cable stays on either side of the arch, allowed the contractor to spread apart the arch to fit the keystone."

He noted that a series of surveys measuring every angle of the arch also was conducted to determine how much the arch needed to be adjusted vertically, horizontally and/or rotationally. After minor adjustments to the arch were made, the keystone was rigged to the crane.

"The crane lifted the keystone into position, while ironworkers standing at the top of the arch — about 236 ft. above the river — guided the steel segments between the splice plates," Ryan said. "Once the keystone was set, ironworkers and engineers took measurements and adjusted the position of the keystone to ensure the perfect fit. Working around the clock, the ironworkers then secured the keystone with more than 4,000 bolts."

He stated that the installation process went smoothly and once the keystone was set, drivers could be heard honking as they passed by and cheering was heard from those watching along the riverbank. 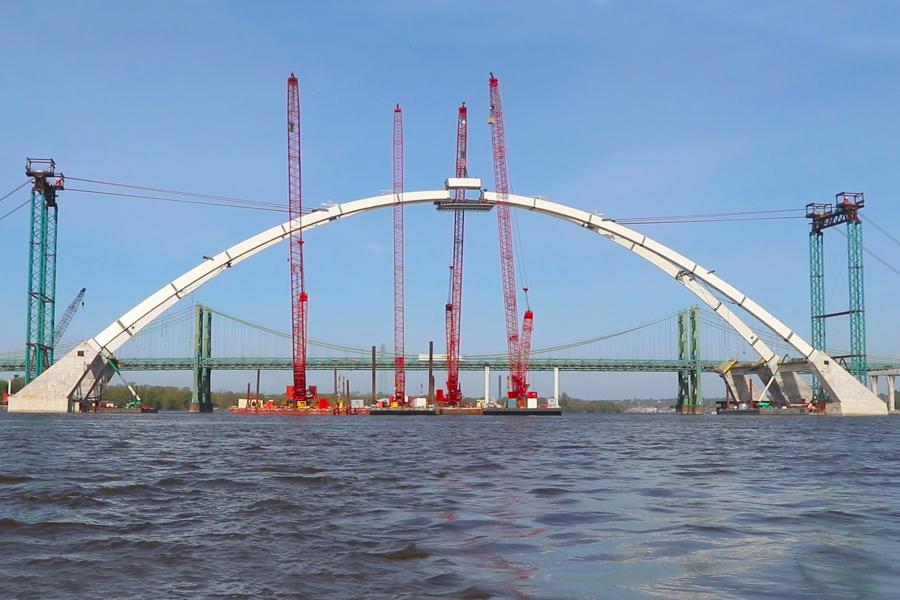 "While reaching a milestone like this is worthy of a big public viewing ceremony, social distancing was still in effect at the time of the event," Ryan said. "The project team got creative and coordinated with the media and municipalities to ensure the public could remain home and view the event from nearly every angle via live streaming on social media, local TV and the project webcams."

He reported that the next challenge will be installing the arch floor system, which will be done this summer.

"The arch floor, which will be supported by hangers, is a complex structure that also will require extensive coordination and precision," he said.

The size of the floor sections varies but the largest is approximately 102 by 160 ft. and the heaviest section is about 300 tons, according to Ryan. They are being pre-assembled off site.

The bridge is one of only a few bridges crossing the Mississippi River in the Quad Cities. The new bridge will be multimodal. The new eastbound bridge will include a pedestrian/bicycle path (separated by a barrier from traffic) connecting to existing paths on both sides of the river. 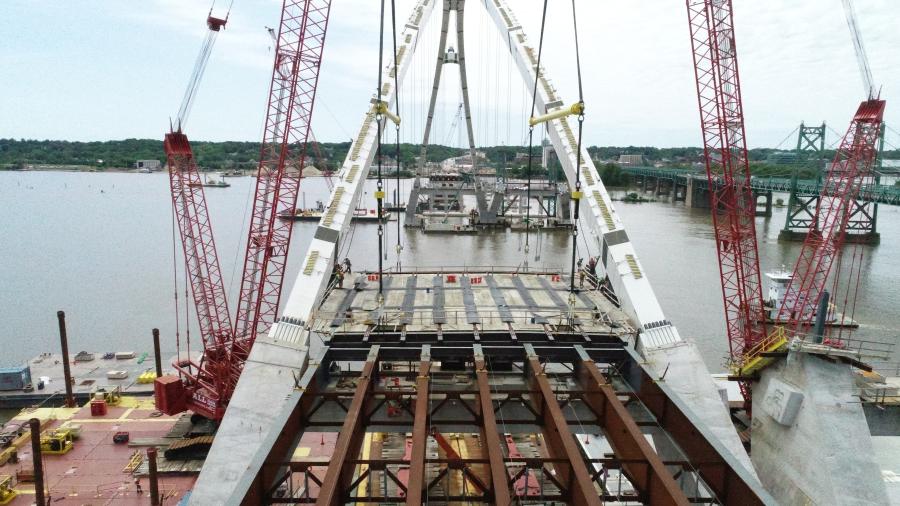 Ryan reported that many subcontractors are working on the project, with more than 50 from the region. Some of the main subcontractors located in the Quad Cities and completing various contracts are Hahn Ready Mix, River City Cutting and Coring, Terracon Consultants, Valley Construction, Toppert Jetting and Tri-City Electric.

According to Ryan, plans are to begin erection of the eastbound bridge arch later this year.

He stated that the goal is to complete the new westbound I-74 bridge by the end of 2020. Both westbound and eastbound traffic will be switched (in stages) to the newly completed bridge to facilitate completion of eastbound I-74. 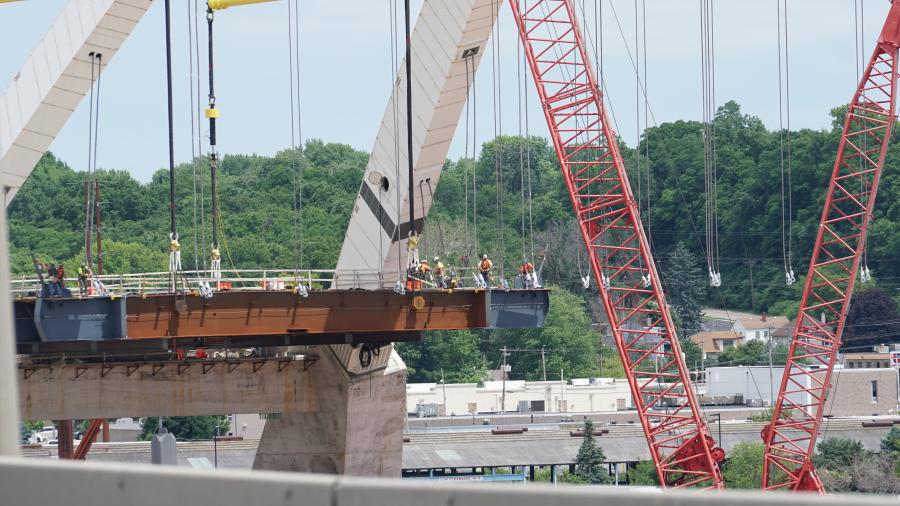 The project website reports that a large number of mussels inhabit the Mississippi River within the project area. The project team is working closely with the U.S. Fish and Wildlife Service to mitigate impacts on these federally protected species.

This relocation effort was reportedly one of the largest in the country. A second phase of mussel relocation will take place in advance of the demolition of the existing I-74 bridge.

According to the project website, I-74 Mississippi River Bridge historically has provided an important east-west link in the nation's transportation network. It crosses the Mississippi River on two separate structures. The westbound bridge — Illinois to Iowa — was completed and opened in 1935. The eastbound bridge — Iowa to Illinois — was completed in 1959 and opened in 1960.

In 2016, traffic on the I-74 bridges across the Mississippi River exceeded a 74,000 average daily traffic count. It is estimated that traffic volumes will rise to approximately 99,900 vehicles per day by 2035, according to traffic projections endorsed by the Bi-State Regional Commission. Growing population and employment during the past several decades have led to increased traffic volume. CEG