The work, which is being completed by Granite Construction Inc., is renovating a major highway that carries nearly 120,000 vehicles per day. 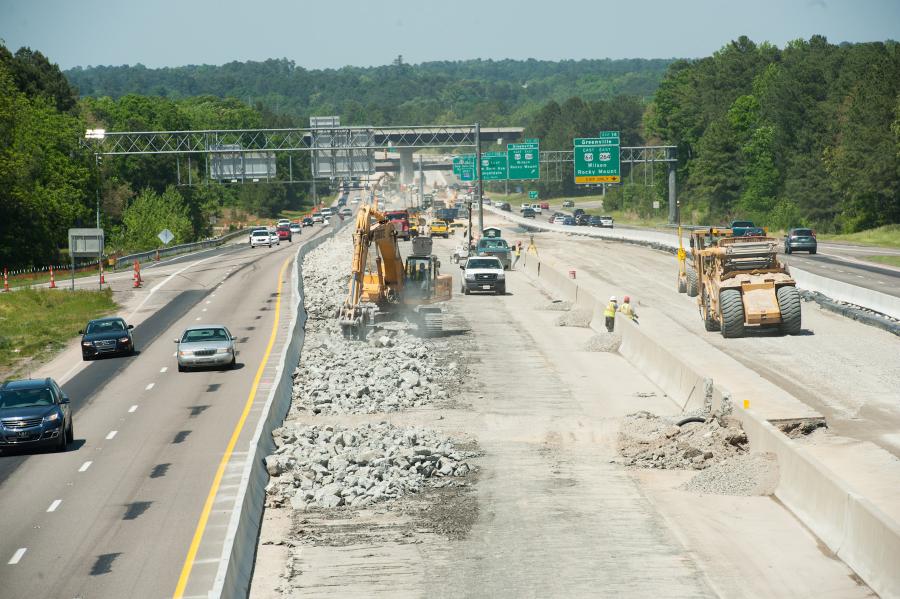 The work, which is being completed by Granite Construction Inc., is renovating a major highway that carries nearly 120,000 vehicles per day. The project is being funded by federal and state funds, with the major roadway work expected to have both sides of the interstate in their final traffic pattern by early spring 2018.

“This two-phase project is part of our 10-year plan to strengthen the state's roadways and help with traffic congestion in the Triangle,” said Steve Abbott, NCDOT spokesman. “Safety is the primary purpose of the project. The 30-year-old pavement and materials underneath I-40/I-440 were cracking and crumbling from alkali-silica reactivity, a chemical reaction triggered by a substance used in paving several decades ago. The damage was worsened by the more than 120,000 vehicles on the highway every day and threatened the future of the roadway if the problem wasn't fixed.

“These are two of the Triangle's busiest roads, so we needed them to be in great shape for the long-term to reduce what was becoming constant travel interruptions for repairs,” he said, “and by essentially building a brand new stretch of interstate highway, we improve the safety through the corridor.”

“It's been maintenance problems,” he said. “The big problem has been potholes with the road deteriorating. The rebuild has typical material going in.”

Because this was a road replacement project as opposed to a widening, the new highway has the same three-to-five-lane capacity through the 8.5 mi. of I-40, as well as 14 bridges in the work zone. But there are some enhancements to help reduce congestion during heavier travel times like the morning and afternoon commutes.

Four connector lanes have been added between the three exits at the western end of the project. They allow drivers who are just going from one exit to the next to stay in the connector lane and not have to merge into regular travel lanes. That will be especially helpful for the section on the westbound side at the heavily-traveled exit for I-440 West and U.S. 1.

The connector lanes can also help with congestion, as drivers traveling through to work zone can merge onto them earlier than a normal exit ramp, taking even more vehicles out of the travel lanes.

The major elements of the project include: replacing the pavement along the southern stretch of I-40/I-440, extending the lanes between ramps in each direction at U.S. 1/64 (Exit 293)/Gorman Street (Exit 295) and Gorman Street (Exit 295)/Lake Wheeler Road (Exit 297), extending the deceleration off-ramp lane for Rock Quarry Road (Exit 300-B) and rehabilitating 12 bridges.

The new road infrastructure was designed by RS&H.

Effective traffic management is key to ensuring the safety of motorists and the construction workers, and that Granite was able to bring in new materials and remove old ones for recycling.

“We're keeping three lanes open in both directions for most of the I-40 rebuild portion and have invested $12 million in public transportation options in an effort to reduce daily traffic in the area by 30,000 vehicles,” said Abbott. “This has helped to improve traffic conditions during the morning and afternoon commutes.”

Conner said that traffic impacts depend on the type of work being done and when.

“For the most part people are being patient,” he said, “and they are aware of the situation of the old road and happy that the work is being done.”

Information on delays, closures, and construction updates are being provided by the project website —FortifyNC.com. To help people take the public transit option, NCDOT is urging them to visit GoTriangle.org

So far, Granite crews have made steady progress.

“We've got a majority of the roadway rebuilt,” said Conner. “It's not all open to traffic in its final pattern completely yet. We've added some additional lighting, put in some concrete median barrier, re-surfaced some existing bridges, and have done a lot of grading work. We have to finish getting traffic into its final pattern. The big thing is that we have a couple of traffic switches left and we have to finish paving the final surface, which will take a couple of months.

“We're coming into the wintertime and that is extending the work because there are going to be periods where work can't proceed,” he said. “For many things, we can work year-round in North Carolina, but we have pretty strict and stringent requirements as far as temperature for the installation of the final riding surface. We are hoping to have traffic into its final pattern at the end of 2018.”

Granite secured the contract for the design-build project in 2013 and immediately set to work on developing a schedule that had personnel working at various sites. Granite's team consists of many people with experience on major projects.

“The biggest challenge is trying to rebuild an interstate while maintain access,” said Conner. “We've tried to keep three lanes open on each side throughout the construction process. This project is almost like when you're rebuilding a house — you never know exactly what you're going to find. The biggest thing was the subgrade not being up to par in places — it was either saturated or had deteriorated over time. You try to have materials there just-in-case. There were instances when it was an easy fix and times when it was a much larger issue that took more time and material than was anticipated.

“Communications with Granite is critical and it's something we have really stressed,” he said. “It's been a team effort to keep each other in the know as to what's going on to be able to proceed and keep the public informed. Granite has made suggestions about how we can alter traffic flow to allow more work or increase volumes of work at different times.”

NCDOT has provided as much space as possible for Granite to store equipment, materials, and establish staging areas.

“They set up shop in one of the quadrants between a ramp and the mainline,” said Conner, “which allowed them to have a lay down yard, on-site office, and a place to receive materials.

To complete the road work, Granite's strategy was based on pushing traffic to the outside and building the road from the median out, including the installation of temporary pavement.

“The strategy worked out well,” said Conner. “There were no major utility issues. There were some subgrade issues, but crews learned how to deal with them as they arose. With the way that the construction was phased, we put in temporary barriers to contain the work zones that allowed Granite crews to tear up large stretches of road at a time and start the rebuilding.”

For the bridge work crews needed to resurface the roadway.

“The bridges were structurally sound — it was the riding surface that was starting to deteriorate,” said Conner. “We took off the top 1.5 inches and replaced that with new latex concrete, which extends the life of the bridge without having to completely tear it out and replace it.”

The amounts of materials removed and brought in are still being tabulated.

“The existing asphalt has been milled off, brought back to the plant, and has been incorporated into the new asphalt,” said Conner. “The existing concrete was pulverized and has been used as the base. We try to recycle everywhere we can — no matter what the material is, there are few that cannot be recycled. Most of the materials that come off our projects can be recycled and go back into current or other projects. We try to make these projects as green as we can.”

A project of this magnitude has many subcontractors, local and from out-of-state, that are aiding the overall effort.

The Fortify project had crews had crews working 24 hours a day for six to seven days a week, with between 60 to 75 Granite and subcontractor personnel on-site. The night operations have focused on paving and laying the final road surface and the hanging of highways signs and other infrastructure where closing lanes is necessary for the safety of workers and motorists.

As the project near completion, Conner noted that it has provided many learning opportunities for future initiatives

“One of the biggest lessons re-enforced is communications between the DOT and the contractor,” he said. “They have been crucial. We've had a lot of meetings regarding the schedule to look ahead and supply information to the public. The scope has also re-enforced some of our safety measures, especially working around live traffic.”