Earthborne’s JCB Dancing Diggers are a team of expert operators showcasing the amazing abilities of the JCB construction equipment. 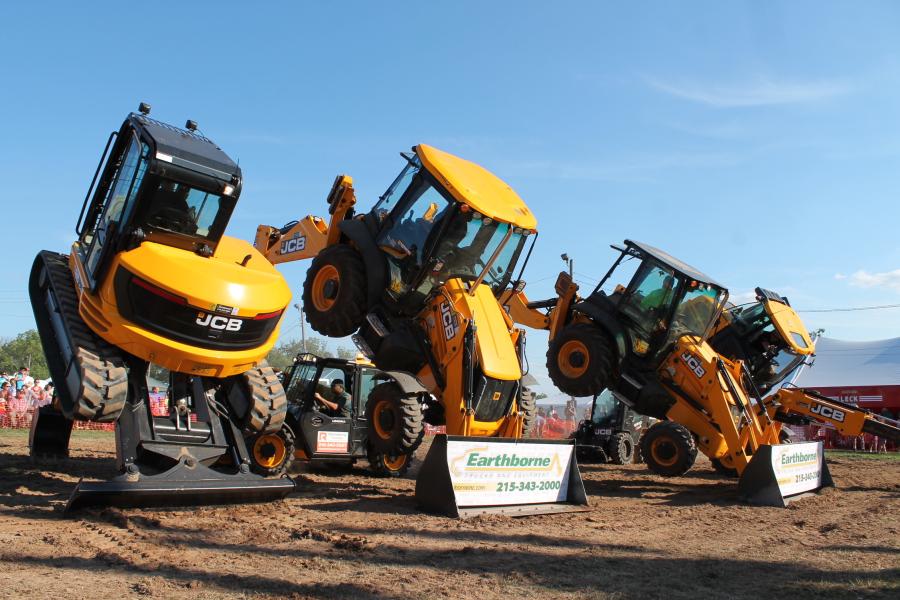 Earthborne Trucks and Equipment’s Dancing Diggers will be performing at the 68th Middletown Grange Fair.

Earthborne Trucks and Equipment's Dancing Diggers will be performing at the 68th Middletown Grange Fair. This is their fourth-consecutive year performing.

Earthborne's JCB Dancing Diggers are a team of expert operators showcasing the amazing abilities of the JCB construction equipment. A performance filled with daring stunts, set to fun, energetic music, thrilled audiences of all ages. During the performance, the operators pushed the machines to their limits, making them circle and move past each other with precision and using the hydraulics to lift the diggers clear off the ground and perform handstands.

The entire Dancing Digger show is provided as a donation to the Middletown Grange Fair.

The fair runs from Aug. 17 to 21st. Performances will be every day of the fair, throughout the day and evening hours. Check Earthborne's Facebook page for show times or look for them posted at the fair. Cost of entry to the fair is $10 per day, per vehicle (all vehicle occupants included). Fairgrounds are located at 576 Penns Park Rd., Wrightstown, Pa. 18940.

What is a Grange?

Grange is a grassroots, non-partisan, non-sectarian, fraternal organization with its roots in agriculture. Although the Grange was originally an organization of farmers, it has evolved to include people from all walks of life who have a common goal to make the world a better place to live.

Since 1867, Grange members have been committed to the betterment of their communities. From community service initiatives to grassroots legislative action, Grange members believe that what they do to strengthen their hometowns today can have a lasting and positive impact tomorrow.

The Grange is active in promoting programs for rural communities on the local, state and national level and prides itself in its community service activities, which have gained national recognition.

The National Grange strives to provide superior programs, benefits and services to all of its members. From discounts on energy and prescription drugs to discounted dictionaries Granges can purchase to donate to school children, the Grange is an organization determined to help people, and people helping people.

History of the JCB

In 1960, Joseph Cyril Bamford, founder of JCB, arranged to have a TV crew film several backhoes raise themselves up on their buckets. To demonstrate just how much faith he had in his machines and their hydraulic failsafe system (locking the arms in the buckets in the event of a loss of hydraulic pressure, preventing them from crashing to the ground), he drove his car right underneath them, astonishing the audience. This has since developed into the famous JCB Dancing Digger Team that travels all over the world to show off the versatility and strength of the backhoe.

In an effort to build more local awareness in the JCB product line, Earthborne decided to put together its own Dancing Digger team and has been choreographing and performing shows for the last four years at various fairs and township events. Videos of past performances can be seen on Earthborne's website, EarthborneInc.com and YouTube page, youtube.com/EarthborneEquipment.

This year, Earthborne celebrates 40 years of truck and equipment sales, service, maintenance and towing in the tri-state area. Working out of two Warrington, Pa., locations, the company is an authorized dealer of product lines including JCB Construction, Rayco Manufacturing, Avant Equipment, Toro Dingo, Fisher Snow Plows and many others.

Earthborne has a team of technicians that are on-call 24/7, ready to diagnose and repair anything that comes through the door.