D.C. Takes On Its Largest-Ever Project 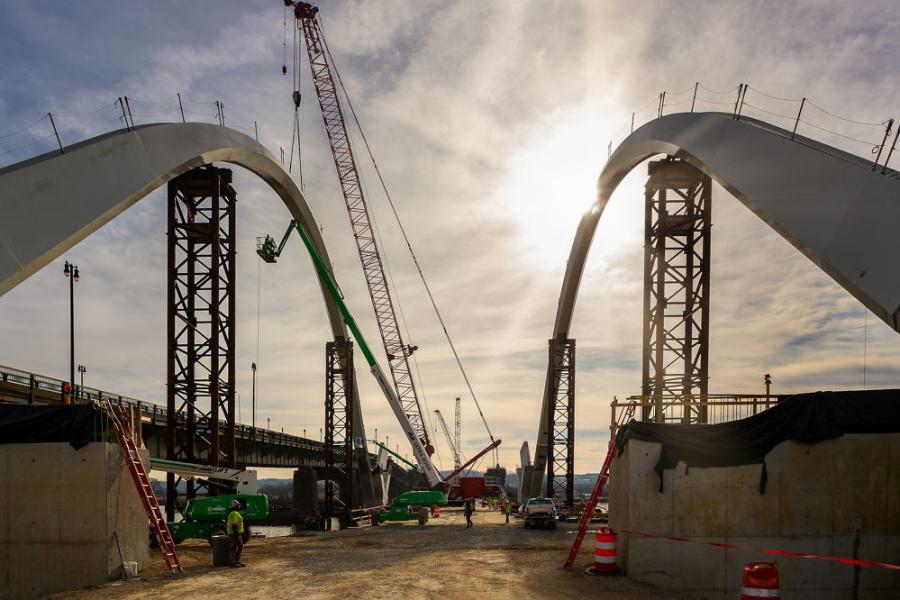 In Washington, D.C., work continues on a $453 million undertaking to replace a popular bridge named for a revered abolitionist. (Norman E Jones photo)

In Washington, D.C., work continues on a $453 million undertaking to replace a popular bridge named for a revered abolitionist. The New Frederick Douglass Memorial Bridge project, which includes reconstruction of the Suitland Parkway/I-295 interchange, is the largest public infrastructure effort in the District Department of Transportation's (DDOT) history. 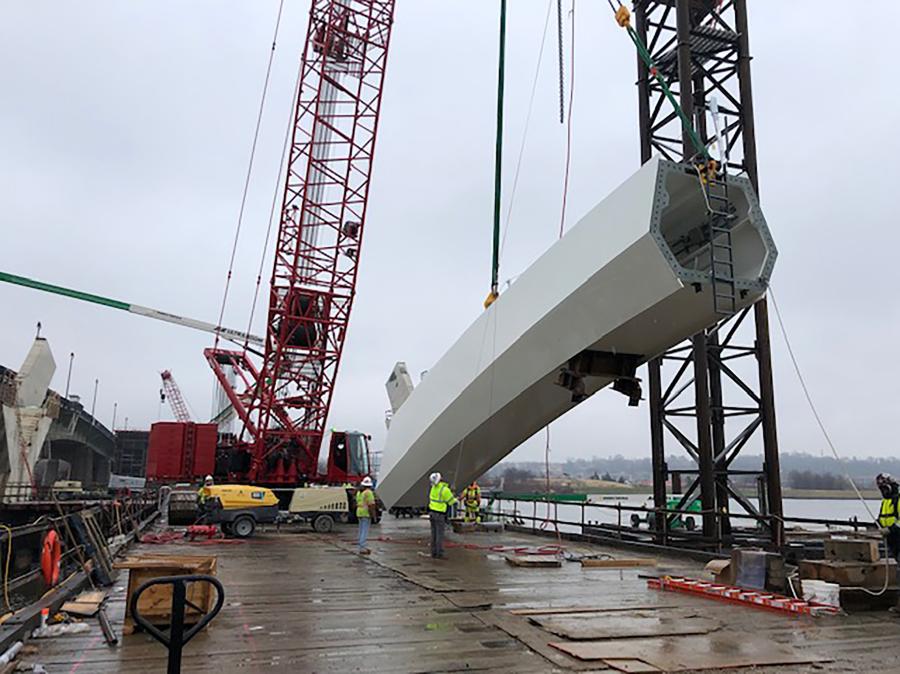 "This signature project will transform the South Capitol Street corridor into a grand urban boulevard that meets the needs of residents and visitors, while redefining its function as one of the prominent gateways into the district," said Dennis Howland II, DDOT program manager. "As planning efforts have been under way for more than a decade, we could not be prouder of the visible signs of progress that are evident every day. What is most rewarding is knowing that this signature bridge is creating jobs for district residents and will ultimately improve transportation options and convenience for commuters across the region."

The nontraditional arch bridge, which carries more than 70,000 commuters daily, has three sets of above-deck-arches, which are cable supported with systems that are separate from one another. In addition to the arches, the bridge's iconic new design features four pedestrian overlooks, and two piers that are designed to appear as if they are floating on the river.

The new bridge will have six traffic lanes, as well as improved accommodations for bicycle and pedestrian traffic. Traffic ovals bookend the bridge and complete the sense of traveling along a grand urban boulevard.

The project has multiple lane closures per day on both I-295 and local streets. Since construction began, DDOT has been working to minimize disruption to neighboring communities and bridge commuters. Howland said overall, community members are excited about what the new bridge will mean for their neighborhoods and their city.

"They are looking forward to the additional lane allowing a smoother flow of traffic, new shared use pathways for pedestrians and cyclists and the green infrastructure improvements that will help the environment, as well as provide green space for community activities."

Howland noted that despite the weather, unpredictability of the amount of prep work required for each arch segment before it's installed and the unique challenges brought on by the pandemic, the project is still on schedule.

Work is progressing on the superstructure, which is the main bridge structure that supports traffic and bears the load passing over it. This includes the bridge deck and suspension cables. 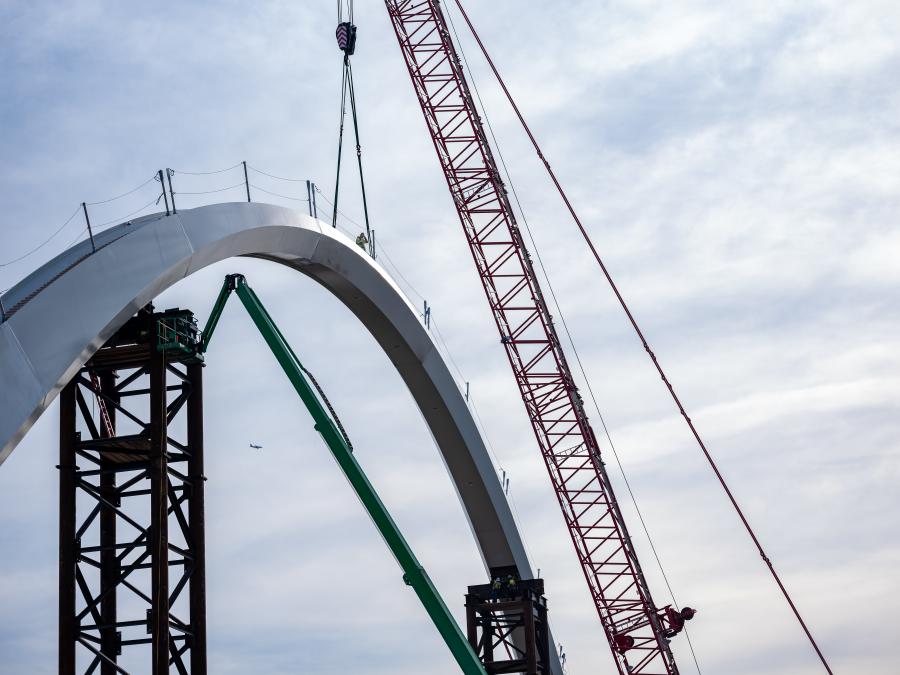 Currently, crews are building the roadway deck on the new FDMB and working on I-295 bridges at Suitland, Firth Sterling and Howard. There also is new construction of traffic ovals on both the east and west side, and reconstruction of I-295 pavement and South Capitol Street.

The biggest weather risk to the project is rain. The project is both earthwork and paving dependent for the remaining schedule, and one day of showers per week can cost multiple days of construction work.

A total of 250,000 cu. yds. of dirt/material will be moved on the project, where a variety of equipment remains on site. The earthwork fleet is primarily made of late-model Caterpillar excavators, dozers and compactors. Crews also are using several large crawler cranes up to 300 tons, manufactured by Manitowoc and Liebherr.

Heavy equipment is being used for the vast majority of tasks, including drainage, sewer, earthwork, steel erection and demolition. Some of the main materials being used during construction include cast-in-place concrete, structural steel, precast concrete and post-tensioning steel.

Excavation for drainage and sewer work, along with earthwork excavation or embanking of earthwork, is happening in roughly 10 different locations on a daily basis.

All existing bridge structures on I-295 and the existing FDMB must be demolished and replaced. Blasting is not currently being utilized on the project. Large hydraulic hammers on excavators are performing most of the work.

Howland said the chief concerns when working near water include safe access to and from the water. Work barge and work boat usage co-mingling with recreational and commercial boater traffic also must be addressed.

Construction milestones include multiple traffic switches on I-295, as well as the opening of the new memorial bridge in September 2021, and project completion in spring/summer of 2022.

"This project is designed and built with a 100-year service life," said Howland. "This adds more steps to the construction process, utilizes more technologically advancement materials and requires additional supervision.

"There are always significant challenges on projects of this magnitude. Limiting the schedule and financial damage brought about by these challenges is the key to success. You must not be surprised when a challenge arises. You must aggressively work to overcome it. It takes a huge team effort. There are nearly 300 people per day working on the job site. The demand for skilled trades is very high and pays very well."

As for the economic impact, said Howland, "This project is creating new jobs for district residents and new opportunities for Disadvantaged Business Enterprises [DBEs]. Since the design phase of the project was initiated, 45 DBEs have been awarded contracts to work on the project, and nearly a third of those businesses are based in the district. 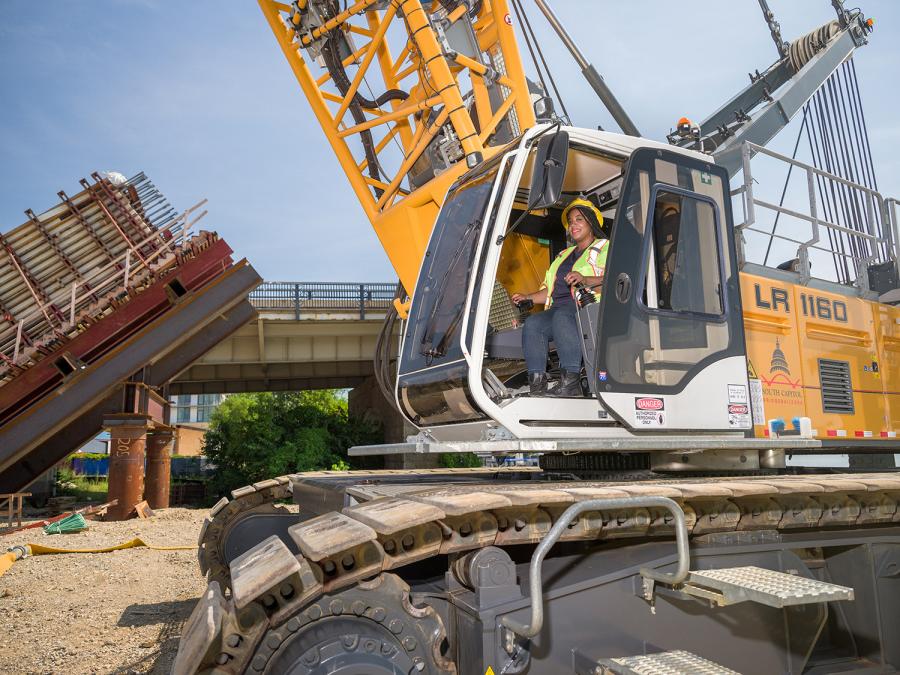 For Howland and other members of the project team, having a role in this undertaking is an extreme honor.

"The Frederick Douglass Memorial Bridge was named after this true American icon nearly 70 years ago, because he is the epitome of everything the bridge represents. The bridge connects, in Douglass' words, the ‘stately and majestic Capitol, representing freedom and dedication to democracy, to neighborhoods steeped in African-American history and culture, through which Dr. Martin Luther King Jr. Avenue stretches.

"As one of the foremost leaders in the fight for social equality and economic progress, Frederick Douglass truly embodied what it means to be a champion of communities, cultures, and people. His legacy lives on through this signature bridge." CEG