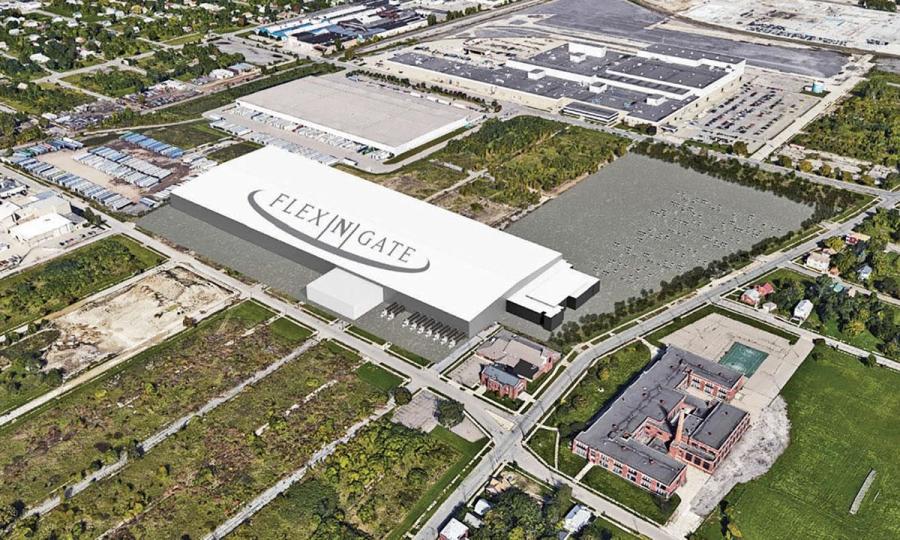 Auto parts supplier Flex-N-Gate is expected to bring 750 jobs to Detroit when it completes its 350,000-sq.-ft. plant at the Interstate 94 Industrial Park. (Flex-N-Gate rendering)

DETROIT (AP) Inside a fenced construction site on Detroit's east side, heavy machines are digging, shoving and hauling away tons of dirt in preparations for the latest addition to the city's industrial landscape.

Auto parts supplier Flex-N-Gate is expected to bring 750 jobs to Detroit when it completes its 350,000-sq.-ft. plant at the Interstate 94 Industrial Park. It will join several other firms that are investing millions of dollars where only so many years ago manufacturing jobs were disappearing.

The changes come as Detroit, like many other Rust Belt cities, looks to lure firms with just what they're looking for: vacant land where they can build and grow.

“I do not think Detroit is a tough sell. What we find when we're speaking with prospects is they want to be within a rich and robust cluster of other automotive and other advanced industries. We have that healthy supply chain with regard to automotive and advanced manufacturing,' said Peter Chapman, Detroit Economic Growth Corp. executive vice president for business development.

A 2012 study found Detroit had about 20 sq. mi. of vacant land across its 139 sq. mi. Quasi-governmental groups such as land banks are empowered by cities to find, acquire and clean up the land to compete with suburban communities that have open expanses of cleaner soil. Since most of the vacant land isn't connected, those groups buy up adjacent lots here and there to make usable larger pieces.

Detroit's prime site for new manufacturing is the 186-acre I-94 Industrial Park northeast of downtown. Flex-N-Gate is scheduled to open there next year.

It's “an example of ... past work assembling smaller parcels into larger ones to accommodate a manufacturing operation such as the new Flex-N-Gate facility,” Chapman said.

Other companies already in Detroit or moving into the city include Sakthi Automotive Group, which is planning an 180,000-sq.-ft. expansion in southwest Detroit. ArcelorMittal plans to move into a 317,000-sq.-ft. building in the I-94 Industrial Park to make steel blanks for the automotive industry. Linc Logistics' 500,000-sq.-ft. facility was the first new tenant there after Michigan made the industrial park a tax-free zone to help attract companies and jobs.

Hoping to capitalize on companies' desire for vacant land, Detroit is undertaking a land-mapping analysis to identify vacant and under-utilized parcels that could be assembled into larger parcels.

“You've got to have the acreage assembled to be able to accommodate a facility of 200,000 to 400,000 square feet ... tracts of land that can be assembled that are in good location and have access to roads, so you're not running trucks through neighborhoods,” said Michael Samhat, president of Crown Enterprises, which developed and owns the Linc Logistics site at the industrial park.

Bruce Katz of the Brookings Institution, said it's not just about “real estate,” but about access “to a talent pool.”

“Automobiles are essentially computers on wheels,” said Katz, who focuses on the challenges and opportunities of global urbanization. “The broader Detroit area is one of the greatest hubs of technological innovation around manufacturing.”

Detroit isn't the only Rust Belt city with vacant land for firms.

In Cleveland, the city's industrial land bank has cleaned up more than 100 acres and had half of that redeveloped.

The sites have been in every area of Cleveland. “Ten acres to 60 acres,” said David Ebersole, director of economic development of Cleveland. “If you don't have land you're not going to land anybody.”

Milwaukee has seen success along the Menomonee River, an area that once housed shops that made train cars, all kinds of machinery, bricks from clay, and processed grains and meat. Working with Milwaukee's private sector, about 300 acres of brownfields have been redeveloped into manufacturing land, trails, parks and wildlife habitat. More than 40 companies have moved into the area, bringing along with them more than 5,000 jobs.

“You are spending money on land somebody else polluted,” said Rocky Marcoux, Milwaukee city development commissioner. “You can go after them for the next 100 years and never collect any money. You don't want these to be areas of disinvestment. We are not going to let these abandoned properties be our postcards for the city of Milwaukee.”