When disasters occur, it’s not just ordinary citizens that feel compelled to give. 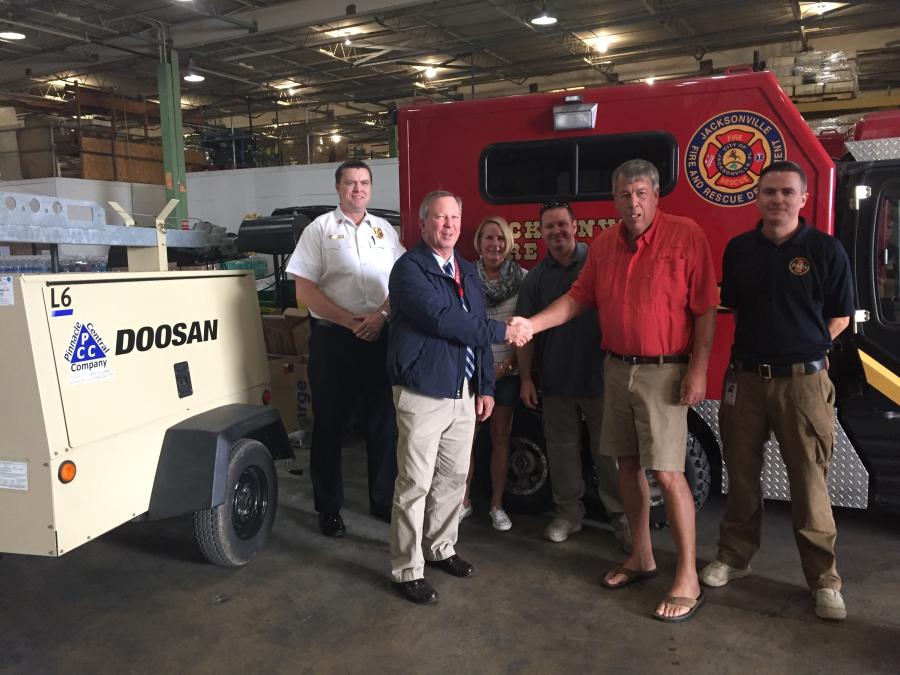 When disasters occur, it's not just ordinary citizens that feel compelled to give.

It's important to remember that companies are made up of good people who are willing to help not just their friends and neighbors, but those in distress hundreds of miles away.

In the aftermath of the two monster hurricanes that hit the U.S. Gulf Coast in August and September, many companies were inspired to open their hearts and wallets to help in the recovery and clean-up in the affected areas.

Doosan Bobcat North America, for one, immediately decided it was not going to stand on the sidelines and watch as millions struggled to recover from hurricanes Harvey and Irma.

Within days of each storm, the company donated more than $325,000 in Bobcat equipment and Doosan Portable Power light towers and generators to damaged areas that stretched from south Texas all the way to the Florida Keys and north to Jacksonville.

One of those donations was a much-needed Doosan Portable light tower and generator to Jacksonville's emergency preparedness division, also known as Jax Ready. The piece will be utilized in a variety of ways and be on hand to assist when the next tropical storm inevitably comes through town.

Pinnacle Central Was Ready to Help

The dealership has two locations and 28 employees in the Sunshine State: one in Polk City and the main office in downtown Jacksonville on the banks of the St. John's River.

“Doosan provided us with the light tower and then we called The United Way to ask where they thought it would do the most good,” said Steve Archibald, president of Pinnacle Central. “They suggested it go to the Emergency Preparedness Division, because they thought that was the agency that might be in most need of it.”

The Doosan Portable L6 light tower is perfect for a use in a variety of ways by Jax Ready, which is part of the Jacksonville Fire/Rescue Department.

The light tower features four powerful lights with a 52-hour runtime, as well as a 120-volt and a 240-volt receptacle. It is powered by a Tier IV compliant Kubota engine with a 6kW alternator. The tower also provides a larger, brighter coverage area and protective reflector housing with tempered glass.

Jacksonville was slammed by Hurricane Irma on Sept. 10 to 11. The massive hurricane first hit Florida in the Keys as a Category 5 storm and by the time it traveled up the state and approached Jacksonville, it had weakened to a Cat 3.

Despite that, heavy rains, storm surge from the St. John's River and the city's flat topography all combined to cause historic flooding in Jacksonville. At one point on Sept. 11, the downtown saw six feet of water flowing through its streets.

Archibald and Pinnacle delivered the Doosan Portable light tower to Jax Ready on Sept. 22, just days after the storm had dissipated far out in the Atlantic Ocean.

What Irma left behind, though, was slowly receding floodwaters, vast property destruction and many people needing help.

Doosan Light Tower Has Many Uses

As Jax Ready was already deep into its rescue and recovery mode, the Doosan Portable light tower was quickly put on the front lines.

Jax Ready Capt. Stephen McManus described the Doosan L6 light tower as a versatile and vital piece of equipment for his city.

“In a hurricane or severe storm, the way we would use the light tower would obviously depend on the situation, but one example would be if the power was out and we needed to conduct rescue operations,” he said. “A light tower/generator would be critical in that scenario. Other examples would include assisting people in evacuating their homes or in our needing to set up a command post in the field. It would be of tremendous use in any type of disaster, like a wildfire or flooding.”

That last disaster is something that regularly happens in the Jacksonville area — and not just in the downtown. After Irma struck, whole neighborhoods were flooded with waist-deep water. With or without major hurricanes hitting the city, Jacksonville has historically struggled to control its flooding problems.

“That is always going to be an issue here,” said Capt. McManus. “This time was just unbelievable, though.”

But a large disaster doesn't have to occur before the Doosan Portable L6 light tower can be useful, he said.

As his department encompasses 62 fire stations and about 1,400 fire and rescue personnel across the geographically-huge city, there are always planned and un-planned needs for the light tower.

“For instance, we have the Florida-Georgia football game coming up where we will have an Instant Command Team set up,” he said in mid-October. “We will need lights to make sure our parking lots are safe. Also, we would use lights like this in a search-and-rescue situation. We haven't yet had an emergency where we would have to use it, but we will be ready when we do get one.”

If Jax Ready needs another light tower, all they need do is go down the street to Pinnacle Central, noted throughout Jacksonville and the state as a go-to shop for specialized equipment.

Archibald's company is finishing up its 18th year in business and has been a Doosan Portable Power distributor the entire time. Its inventory includes the manufacturer's lights, generators and compressors.

“That has always been very important to us as a business,” he said. “Our niche, though, is in corrosion control and because of that, we supply a lot of equipment to industrial painting contractors that work throughout the state of Florida. They use our air compressors, generators, sand-blasting equipment, dehumidification equipment, dust collectors, etc.”

And as Jacksonville is an important United States Navy town — the third-largest in the nation, behind only Norfolk and San Diego — a large amount of Pinnacle Central's work is in supplying the nearby shipyards with equipment to clean and maintain the fleet.

In addition, Pinnacle Central supplies equipment to the Florida DOT, many of the region's recreation venues and stadiums, and anywhere that requires lights for outdoor parking facilities.

By tailoring his dealership's products to a part of the country that will always be in need of them, Archibald and Pinnacle Central have hit upon a winning business strategy.

And by helping provide a Doosan Portable light tower to Jax Ready, Pinnacle Central has continued its practice of being a good steward in its community.