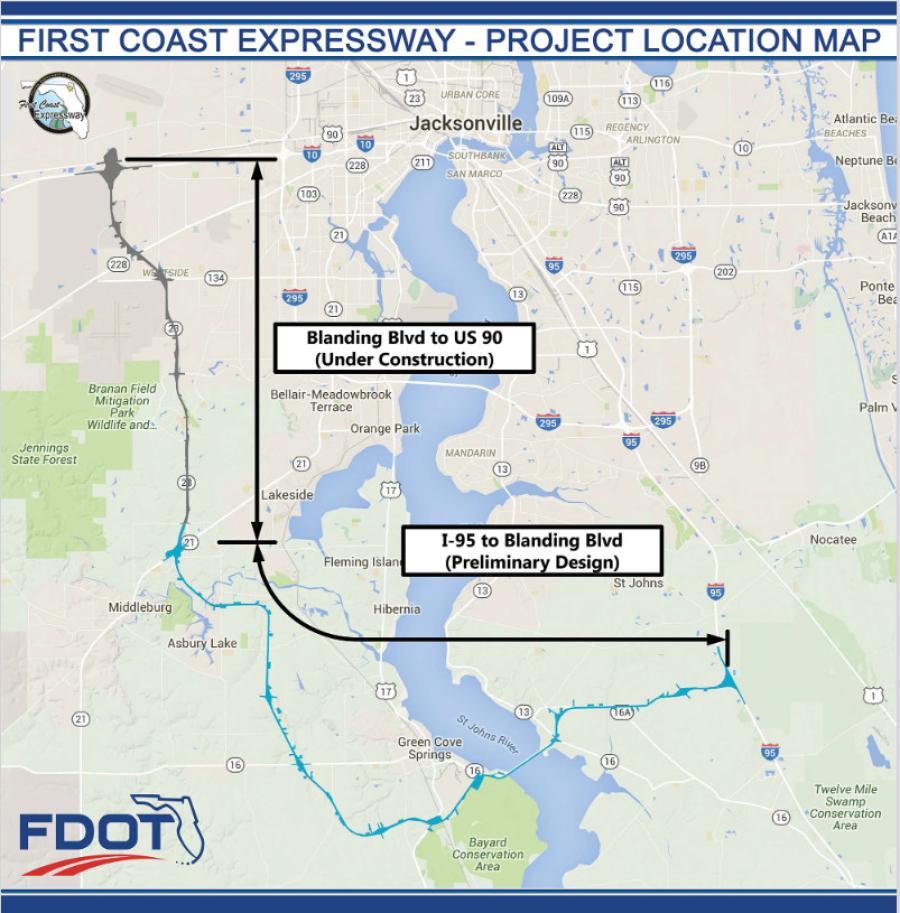 The First Coast Expressway, known by some as the Outer Beltway project (SR 23), continues construction stretching from Interstate 10 on Jacksonville, Fla.'s Westside down to Clay County and east to St. Johns County.

The current section of the entire 46-mi. toll road being built encompasses two phases that connect Clay County's Blanding Boulevard in Middleburg all the way to the Shands Bridge over the St. Johns River. The two phases are slated to be completed between 2025 and 2026.

Jacksonville's Superior Construction Company Southeast is listed by the Florida Department of Transportation (FDOT) as the contractor of the work in Clay County, which also notes the contract as being worth almost $100 million.

Right now, many parts of southern Clay County are experiencing a considerable amount of construction on the road project, designed to give commuters a quicker drive to Jacksonville. Boosting the effort is the fact that the county has been experiencing a population boom in recent years, with a need for more homes, schools and roads.

Many residents, though, are sad to see the small-town lifestyle of the southern Clay County communities of Middleburg, Lake Asbury and Green Cove Springs give way to big city suburbia.

But while some have lamented the growth because of the population boom, others welcome it because of the long commute so many county residents face right now.

"As everyone knows, Blanding Boulevard and some of the primary routes are pretty congested," said Sara Pleasants, a spokesperson of the FDOT. "So, this provides an alternative to that for people who live out on the far west-side of the Jacksonville metro area."

Pleasants also pointed out that the growth is not due to the new road; rather, it's the other way around: The First Coast Expressway is being built to accommodate the huge expansion Clay County has undergone.

County leaders also are aware of some unease by longtime residents with the growth but said the new expressway is critical to the future of the area.

"I think you could call it a big deal for Clay because it is," said Clay County Commission Chairman Mike Cella. "[We need it] so that our people don't have to drive as far to go to work. Right now, Clay is the number one county in the state in which more people leave to go to work instead of stay [locally] to work.

Cella said population projections for Clay County show it should add 85,000 new residents by 2040, and the new expressway is needed to accommodate all that growth – something that is not new for the county. To illustrate, Cella noted that in 1970, Clay's population was only about 32,000 people.

He added that large amounts of land that are environmentally protected in the county will not be developed.

Once the two phases to connect Blanding Boulevard with the Shands Bridge are completed, there will be a rebuild of the latter span that connects Clay and St. Johns counties. That project is slated to begin in 2022 and finish in 2029.

The FDOT added that the First Coast Expressway also will add a critical hurricane evacuation route for evacuees traveling north from South Florida.