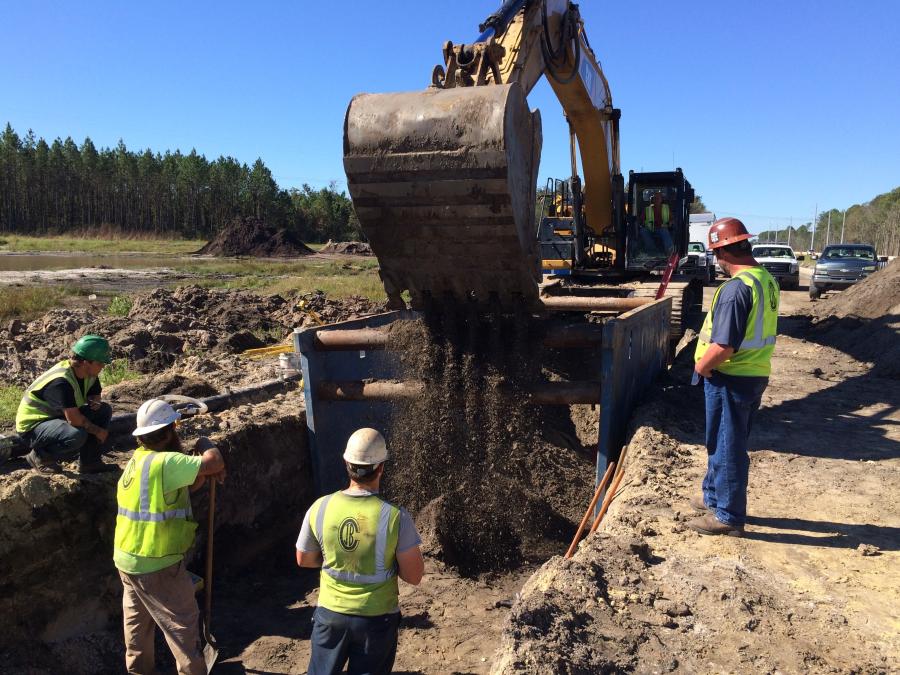 Construction of the area’s first Diverging Diamond Interchange (DDI) under I-95 at A1A Exit 373 is moving at a steady pace in Florida’s Nassau County. (Odette Struys, FDOT photo)

Construction of the area's first Diverging Diamond Interchange (DDI) under I-95 at A1A Exit 373 is moving at a steady pace in Florida's Nassau County. The more than $40 million project consists of reconstruction and widening of 2.2 miles of A1A from west of I-95 to west of Still Quarters Road, widening of ramps at Interstate 95/A1A exit 373 to Yulee/Callahan/Amelia Island/Fernandina Beach and the reconfiguration of the interchange under Interstate 95.

With this type interchange, the two directions of traffic below I-95 briefly drive on the opposite side of the road. This amounts to a significant improvement in safety, since long left turns crossing traffic lanes to enter or exit the interstate will be eliminated. Additionally, the DDI promotes added efficiency with only two clearance intervals (the time for traffic signals to change from green to yellow to red), instead of the six or more found in other interchange designs.

“The DDI's safety and traffic efficiency have made it a popular choice to upgrade interchanges, especially since Nassau County's A1A/State Road 200 is the only major hurricane evacuation corridor for residents and businesses in Amelia Island, Fernandina Beach and Yulee,” said Struys.

“Construction is a temporary inconvenience to a long-term solution, and when completed, the DDI will be a welcome relief to a very busy interchange.”

Entrances to area businesses may be affected with temporary signage provided by FDOT to assist in easing access. Temporary lane closures, detours and lane shifts are all part of the construction scope. Struys said initial confusion about the DDI has been eased with several open houses and presentations by FDOT's public information office, in collaboration with project engineers to address any concerns about the unique design that will briefly take motorists onto the opposite side of the road under the interstate.

“Nassau County is also experiencing increased growth with the addition of new residential communities and schools being constructed in the low country region,” said Struys. “The DDI will play an important role in managing and easing traffic flow.”

The project also consists of widening the roadway from four to six lanes with raised medians, curb and gutter, sidewalks and bicycle lanes and high mast lighting. Construction is funded by federal and state funds. Work began in January 2017, and is expected to be completed by 2020, barring any unforeseen delays.

Work has been affected due to contract holidays and weather, which has included record rainfall of more than 21 inches and the arrival of Hurricane Irma in September. However, the project remains on track for a summer 2020 completion.

“FDOT District Two's DDI joins approximately 90 DDIs throughout the country as the region's first for Northeast Florida,” said Struys. “Completing the final crossover configuration phases will be challenging, as it will include a detour for east and westbound motorists on A1A/SR 200 beneath Interstate 95.”

The project requires construction of nine lane miles of concrete pavement and approximately six lane miles of asphalt, and signalization and pavement markings for implementation of the diverging diamond.

Struys said that constructing the DDI, only the second in the state, is no small undertaking.

“It takes an innovative team of engineers to carefully plan, and contractors to execute the various phases of construction of the DDI, coupled with a strategic public outreach plan to communicate the advantages of the unique design, and to be able to disseminate information to the public in a timely fashion regarding temporary lane closures, detours or necessary lane shifts.”

In widening the roadway from four to six lanes, converting a rural roadway to an urban corridor requires a storm water collection system, concrete curb and gutters and sidewalks, as well as nine lane miles of concrete roadway and six lane miles of asphalt pavement specific to this DDI project.

“This project will include concrete traffic separators,” said Struys, adding that concrete curb and gutters will be slip-formed, and the five-foot concrete sidewalks will be cast in place. The bicycle lanes will be constructed with the same material as the roadway sections.”

The condition of the site prior to construction involved an existing four-lane rural roadway that extended throughout the project corridor, with limited businesses near the interchange. Major development is now under way north and east of the interchange with access to A1A/SR 200.

The collection of storm water run-off has necessitated clearing, grubbing and the construction of two large retention ponds. The project involves approximately 150,000 cu. yds. of excavation, and 200,000 cu. yds. of embankment.

The most time-consuming part of the work involves challenges the contractor has faced, including utility relocation and coordination, coordinating with major developments within the project limits, as well as performing construction operations impacted during hurricane season and heavy rainfall.

Traffic also is being affected as the project moves forward.

“Attention to detail for Maintenance of Traffic [MOT] is essential,” said Struys. “Temporary lane closures, detours and traffic shifts are part of the expected construction scope. Construction crews work in close collaboration with local and state law enforcement agencies, to ensure safety is a top priority during construction.”

Officials have stressed that the DDI design has much in common with the layout of a conventional diamond interchange. The main difference between a DDI interchange and a conventional one is in the way that left and through movements navigate between the cross street intersections with ramps.

The DDI design accommodates left turning movements onto freeways and limited-access highways, while eliminating the need for a left-turn signal phase at signalized ramp intersections. On the cross street (SR-A1A), the traffic moves to the left side of the roadway between the signalized ramp intersections. This allows drivers of vehicles on the SR-A1A who want to turn left onto the I-95 ramps the opportunity to continue to the ramps without conflicting with opposing through traffic and without stopping.

Struys said for construction crews working on a project that will serve so many for decades to come, it's important to remember the big picture.

“The reward will come when the interchange is fully operational, and motorists are able to enjoy the increased efficiency and safety the DDI offers.”

Laura DiBella, the executive director of the Nassau County Economic Development Board, called the project a major improvement to the area.

“We should consider ourselves lucky that we're getting this kind of attention. It certainly helps from an economic development standpoint, as far as attracting new jobs. It's planning for growth and business and commerce that's coming into the area.

“We're most certainly ahead of the game to implement this sort of transportation advancement in our county. It's very forward-thinking on our DOT district's behalf. It's definitely a step in the right direction.”

DiBella said the DDI is going to virtually eliminate the queues filled with commuters twice a day at that intersection.

“My office is right by the interchange, and I drive past the 14-miles of construction. I've watched it go from concept to development, and can't wait to see the final product.”