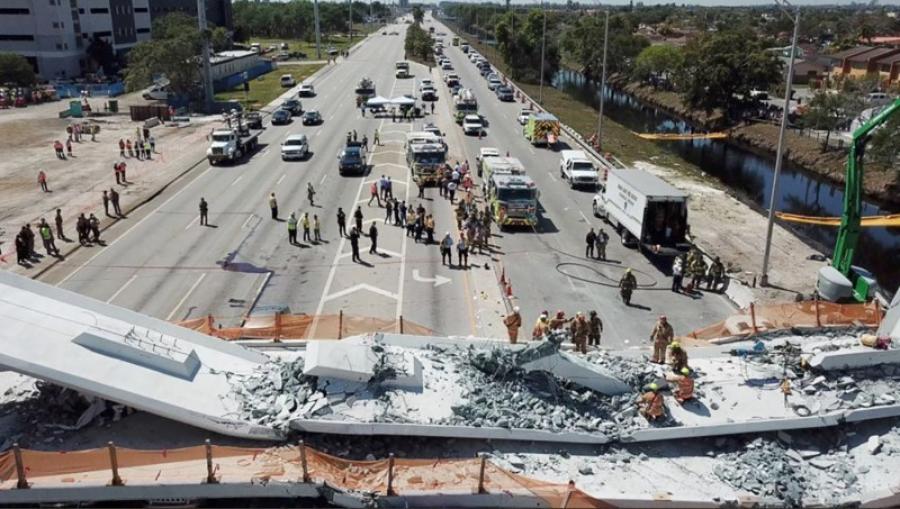 Five people were pronounced dead at the scene, and a sixth died after being taken to the hospital, ABC News reported. Authorities have now labeled the mission a recovery effort.

Six people have died from the bridge collapse at Florida International University on March 15.

Five people were pronounced dead at the scene, and a sixth died after being taken to the hospital, ABC News reported. Authorities have now labeled the mission a recovery effort.

In addition, 10 people who were injured were taken to Kendall Medical, and categorized as level-one trauma patients. Another eight also were admitted and treated for less serious injuries, including broken bones, bruises and abrasions. Others may have been taken to different area medical facilities, ABC News reported.

The bridge was built using accelerated bridge construction (ABC), a method designed to safely and quickly erect bridges without lengthy road closures and traffic delays. In the past, both Rhode Island and Massachusetts used this technique to build bridges without any incident.

The FHWA said that ABC is often chosen to reduce the project's effects on traffic, and to be mindful of the "safety of the traveling public."

There are three different ABC methods, including:

This process is usually complete between 48 and 72 hours.

In this instance, the pedestrian bridge was built on temporary shoring on 8th Street in Sweetwater. Self-Propelled Modular Transporters (SMPTs) equipped with pull-up gantries were placed beneath the main span, lifting the structure from the temporary shoring, before it was carried in a roughly 90-degree arc and lowered into place, an FIU fact sheet said. According to FIU, this was "the largest pedestrian bridge move via a Self-Propelled Modular Transportation (SPMT) in U.S. history." The move occurred on March 11.

Some facts about the bridge, according to FIU:

This is the first time a bridge that was built using accelerated techniques has collapsed.

Details are still formulating about what exactly occurred to cause the bridge to collapse; the National Transportation Safety Board is planning to be on the scene the evening of March 16 to conduct an investigation by a team of 15 specialists, including experts in the engineering, material science and survival factor fields. According to team leader and NTSB Chairman Robert L. Sumwalt, if the agency finds any problems with ABC methods, it can issue a series of "urgent interim recommendations," ENR Southeast reported. Sumwalt went on to say that as far as he knew, "there have been no problems" with other projects using ABC methods.

According to a tweet from Fla. Sen. Marco Rubio March 15, the cables suspending the bridge "had loosened & the engineering firm ordered that they be tightened. They were being tightened when it collapsed."

Initial reports stated that two construction workers were working on the side of the bridge when it fell.

Amjad Aref, a University of Buffalo professor in the department of civil, structural and environmental engineering, told USA Today that the bridge should have been stabilized with temporary supports until the connections between the permanent columns and foundation were finished.

"When collapses like this happen very quickly, it's called instability, Aref, said. "Something triggered the system to quickly go through disproportionate collapse."

"Our family's thoughts and prayers go out to everyone affected by this terrible tragedy. The new UniversityCity Bridge, which was under construction, experienced a catastrophic collapse causing injuries and loss of life. MCM is a family business and we are all devastated and doing everything we can to assist. We will conduct a full investigation to determine exactly what went wrong and will cooperate with investigators on scene in every way."

According to Heavy.com, MCM, though it has a "long history of successful projects that have had no issues," was accused in a lawsuit on March 5 in Miami-Dade Civil Court of causing injury to TSA employee Jose Perez at the Fort Lauderdale-Hollywood International Airport. MCM was awarded a contract for the airport's expansion, and as part of the work, built a temporary bridge for airport employees to use so they could access the restrooms as construction was underway. But the bridge broke beneath Perez on Oct. 20, 2016, and he sustained broken bones and spine damage, Heavy.com reported.

Figg Involved in Past Bridge Collapse

"Our deepest sympathies are with all those affected by this accident. We will fully cooperate with every appropriate authority in reviewing what happened and why. In our 40-year history, nothing like this has ever happened before. Our entire team mourns the loss of life and injuries associated with this devastating tragedy, and our prayers go out to all involved."

While Figg has been involved with the successful design and construction of a long list of bridges across the country, the company did receive citations when the Jordan Bridge span in Virginia collapsed while still under construction in 2012, Heavy.com reported. A 90-ton concrete piece of the bridge fell 40 ft. onto railroad tracks below as workers were installing it. Four workers sustained minor injuries, none of which required a hospital trip.

However, the Virginia Department of Labor and Industry issued Figg Bridge Builders, just one of many companies under the Figg Engineering Group umbrella, four violations with fines totaling $28,000, Heavy.com reported. The citations said the company failed to:

However, the Department of Labor and Industry's Jay Withrow said, "Trying to figure out what failed in what sequence is difficult. We're not saying one way or another whether (the alleged violations) had anything to do with the accident at this point."

In response, Jay Rohleder, a Figg project manager, said, "The incident that occurred during construction was a construction equipment property damage issue that had nothing to do with the final bridge. The proposed citation is not related to the structural integrity of the completed project in any way and is not the reason the erection truss required replacing."

The girder in question was used to support portions of the bridge as it was built across a river, but the piece, which was meant to be used for a straight bridge needed modifications to allow it to support the Jordan Bridge's curved design, Heavy.com reported.

This is a developing story. Please check back for more details as they emerge.