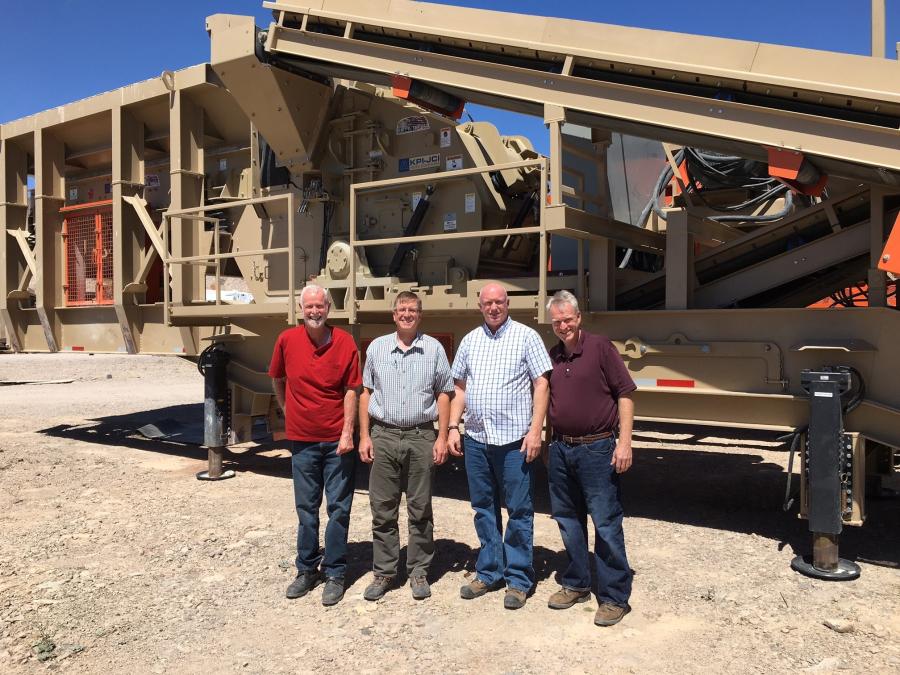 Goodfellow Crushers has been on a business roll.

In fact, the Boulder City, Nev.-based company recently opened new branches in California, Arizona and northern Nevada. That brings the company's branch count up to five.

The business' recent growth was spurred when Goodfellow bought Arizona's Dakota Fabricating's facility as well as some of the company's equipment in 2016. This marked just the latest in a series of moves directed at “making Goodfellow the dominant equipment supplier to the aggregate industry in the southwest,” Kurt Goodfellow, company president, said.

The current Goodfellow family members have been building, selling, and servicing crushing and screening equipment since “we were kids,” Kurt added.

The “kids” that Goodfellow refers to are he and his two brothers, Mark and Chad. All three are actively involved in the business, as is Lynn, their father.

Raising a young family in Southern California in the 1970s, Lynn Goodfellow sought a better way of life for his family and thought he might find that in the small, rural community of Kanab, Utah. Because he had supported the family by selling used equipment in California, Lynn set out to do the same in Utah. He soon learned, however, that Kanab (300 miles from Salt Lake City and 200 miles from Las Vegas) was a bit too remote for the business to thrive.

Lynn stuck with his Kanab location and gradually transitioned to the crushing and screening segment of the industry.

In 1985, tragedy struck the business and the Goodfellow family. While flying a customer to an auction in Wyoming, the plane crashed, leaving all three passengers severely injured, including Lynn. Lynn Goodfellow was extremely fortunate that day and again more than 20 years later.

Upon his recovery (and to move on and heal from the accident), Lynn persevered and set about to expand his business into a larger market. Eventually, he moved the family and his business to Las Vegas, which was booming in the late 1980s. Goodfellow wanted to be where the action was, so in 1988, he opened what is now the company's corporate headquarters in Boulder City, Nev., just outside of Las Vegas.

In the mid-1990s, Goodfellow took on the KPI-JCI line of equipment, and the business rapidly grew. The first branch office was opened in Lindon, Utah, in the late 1990s.

In 2010, the company re-entered the Southern California market with the purchase of an existing facility in Rialto, near Riverside. There, the company quickly began marketing KPI-JCI, and soon after, obtained the right for the crushing and screening line in Northern California as well, servicing the area from a branch in Reno.

While Kurt Goodfellow has been at the helm of the family business since the late 1980s, Lynn stays actively involved.

“He gets to work earlier than any of us,” Kurt said of his 75-year-old father.

Mark Goodfellow is involved in the sales end of the company, and Chad, who has a degree in manufacturing engineering, heads the team that designs the equipment they build.

Goodfellow Crushers was also recently named the Roadtec dealer for Nevada, Arizona and Utah. Brian Ady heads up sales for the Roadtec products.

In addition to selling the KPI-JCI and Roadtec lines, Goodfellow also supplies parts and service for all crushing and screening plants, design and fabricate non-standard systems, and does repairs on all brands.

The company, which employs 140 people in four states, is active in the mining industry, as well as aggregates.

For the Goodfellow family, the industry they serve is not just a small aspect of their collective lives — it is a way of life.

“This is not something we are building to sell,” said Kurt Goodfellow. “This is our passion. We eat, sleep and drink crushing and screening.”

Lynn Goodfellow, who has been racing cars since the 1950s, has always dreamed of becoming a member of the 200-mph club. His chance came in 2007 when he hit 242 mph in Land Speed racing. Soon after, Goodfellow headed the Mormon Missile Diesel Streamliner team in an attempt to set an even higher record on Utah's Bonneville Salt Flats.

In winter 2007, Mormon Missile's team began working on a tight timeline to create a record-breaking car in fewer than six months, designing and building a spaceframe chassis; a modified GM Duramax engine producing more than 1000 hp; twin turbo chargers; and intercoolers. The Mormon Missile's sponsor, Goodfellow Crushers, offered their Boulder City, Nev., facility as a construction space, where the team spent a great deal of time making the car's aerodynamic body, complete with an underbody designed to deflect air around the tires.

In 2008, fellow racer Curtis Halvorson set a 300-plus mph record with the Mormon Missile. The same day Goodfellow seized the opportunity to break it as he got into the car and took off. While he did break Halvorson's record, it came with a price. On his return run, the engine overheated, melted a hole in one of the heads, and set off a chain reaction: the coolant ignited from the exhaust before steam slipped past the firewall, starting a fire in the cockpit.

Although Goodfellow was wearing a fire suit, the heat transferred from the steel steering wheel burned his hands badly through his fireproof gloves. He spent two months recovering from the incident in a Salt Lake City hospital, where all of the fingers on his right hand were amputated, leaving 1-in. stubs, and his thumb and part of his middle finger on his left hand were removed.

Goodfellow's injuries didn't stop him from jumping back in the driver's seat, though: When he raced again in 2010, Goodfellow made a qualifying run of 333 mph, but the car's engine overheated before he had the chance to make a record run.

The Mormon Missile team's standing goal is to beat the world's fastest diesel with a record speed of 350.92. Although the record-setting car is in a different class from the Mormon Missile, the team doesn't care. “We'd like to do it anyway,” they said, “just to bring the title of 'World's Fastest Diesel' to the USA.”