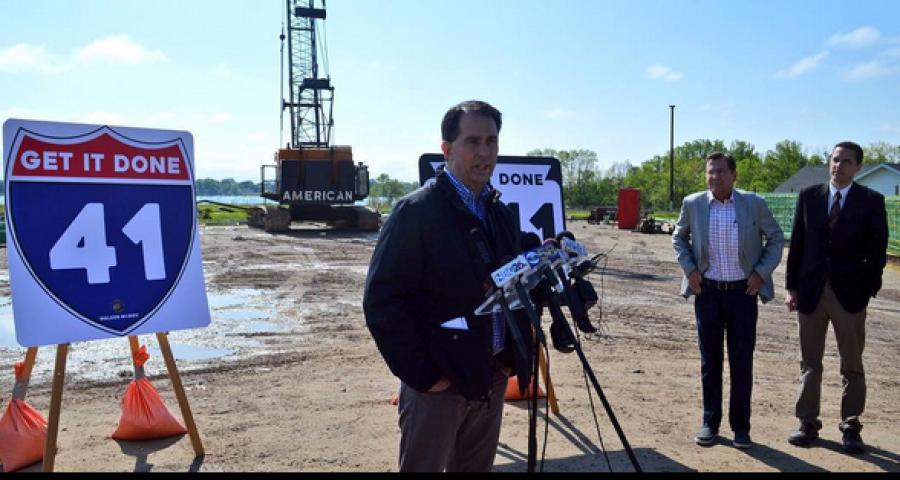 Gov. Walker attempted to broker a compromise, calling for a $200 million reduction in borrowing and more federal money to keep major interstate projects in southeast Wisconsin on track. (walker.wi.gov photo)

MADISON, Wis. (AP) Gov. Scott Walker's self-described “reasonable proposal' to borrow less and rely on more federal funding to pay for roads and break a state budget impasse got a lukewarm response from Republican legislative leaders July 6, who showed little signs of moving closer to a deal to pass a new spending plan.

Walker's plan that sticks with his pledge not to raise gas taxes or vehicle fees was dismissed by minority Democrats, who said its reliance on an influx of new federal money was a sham and unrealistic.

Republicans who control the Legislature have struggled to reach agreement among themselves and with Walker on how to plug a nearly $1 billion transportation funding shortfall, leading to a delay in passage of a new two-year spending plan beyond the June 30 deadline. Current spending levels remain in place while the stalemate continues.

Walker and Senate Republicans have been steadfast in their opposition to raising the gas tax or vehicle fees as part of any solution. Assembly Republicans have insisted that there needs to be less borrowing and a revenue increase to provide a long-term funding source for roads.

Walker attempted to broker a compromise, calling for a $200 million reduction in borrowing and more federal money to keep major interstate projects in southeast Wisconsin on track. Taxes and fees would not go up under the plan Walker submitted Wednesday to Assembly Speaker Robin Vos and Senate Majority Leader Scott Fitzgerald.

“This is a reasonable proposal that allows the leadership in the Assembly and Senate — as well as taxpayers — to have significant wins on our major issues,' Walker wrote.

Fitzgerald and Vos welcomed the ideas from Walker, but neither said it would solve the budget logjam. Both questioned whether the state would get enough from the federal government to make it work, and Vos again blasted the level of borrowing.

“I continue to remain optimistic that Republicans can focus on the core value we all hold that it's not conservative to borrow and spend,' Vos said.

Fitzgerald said Republican senators remained opposed to gas tax or vehicle fee increases, but would be willing to lower the level of borrowing from $850 million to $750 million. Walker's original budget had only $500 million, a level that Assembly Republicans said was too high. His new proposal would cut borrowing by $200 million and make up for it with agency savings.

Walker's new plan also calls for an unspecified amount of contingency borrowing linked to additional federal money to pay for keeping southeast Wisconsin mega-interstate projects on track. The projects cited by Walker are the Interstate 94 expansion from the Illinois border to Milwaukee North/South, the Milwaukee Zoo Interchange and the I-94 east-west expansion.

Walker said Wisconsin is “well positioned' to qualify for additional federal money to help support borrowing for those projects.

But others were skeptical.

A separate memo from the nonpartisan Legislative Fiscal Bureau, released to Democratic state Rep. Gordon Hintz on June 28, indicates Walker plans to seek $341 million in federal redistribution money. That is 10 times the roughly $34 million the state has received on average the past five years.

Knowing just how much money would realistically be available from the federal government is key to understanding whether what Walker is proposing is viable, Fitzgerald said.

“I'm all ears,' he said. “If somebody can tell me that will work, I think that will build credibility with the caucus and hopefully that might be one piece of what gets us through the transportation budget.'

Walker's spokesman, Tom Evenson, wouldn't confirm that the governor was hoping for $341 million, saying the amount requested will be part of “ongoing discussions we have with the Legislature.'

Walker has toured the state, warning that failure to quickly pass a budget puts ongoing road construction work in jeopardy. But the Fiscal Bureau memo shows ongoing projects would be largely unaffected unless there isn't a new budget in three to six months.

Walker has been governor with full Republican control of the Legislature since 2011, and all three prior budgets were completed faster than this one. The first two were done in June. In 2015, the Legislature's budget committee passed the plan on July 3, and it won full legislative approval six days later.