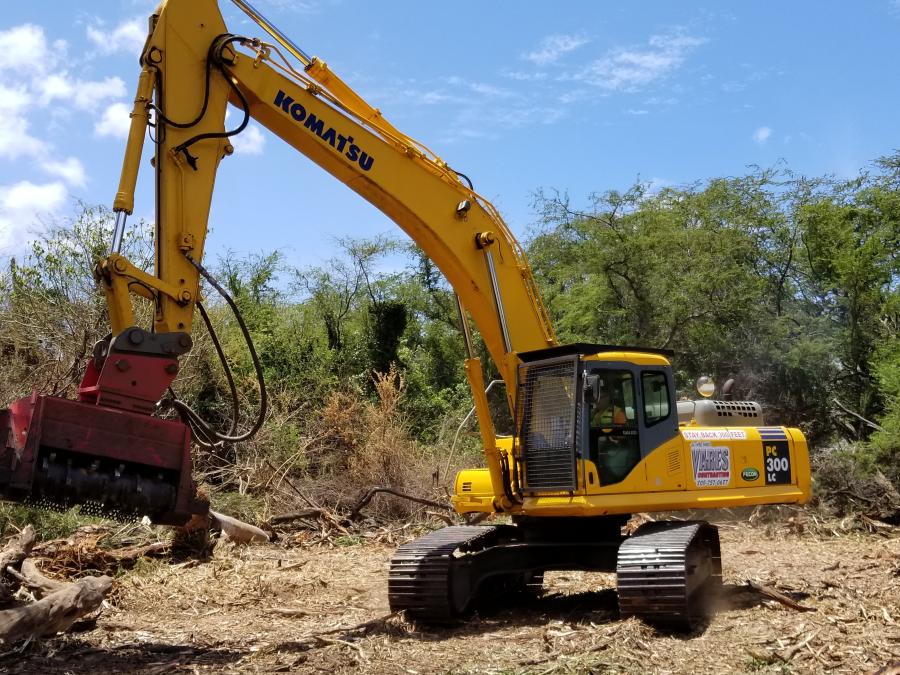 When the Maui Electric parent company changed, this 2.5-mi. access road underneath the main transmission line had not been cleared in more than two years. This led to the entire span of the access road being clogged with five times more vegetation than normal.

The tropical climate of Maui attracts thousands to the island for vacations, special events, or just to escape the stress of the mainland. But this past summer — the hottest on record for Maui — sparked not only tourists, but a massive wildfire.

Overgrown and crispy vegetation rapidly spread the blaze — right up to the island's lone power plant.

Through a stroke of luck, Vares Contracting was called to clear overgrowth along transmission line access roads and in the front of the power plant only two days prior to the fire. This process kept the lights on for approximately 166,000 people on the island by providing a fire break and a last stand from which to fight the encroaching flames.

In the midst of the highest rated fire emergency — Immediate Danger to Life and Property — Vares turned its powerful equipment to clearing and mulching down the fallen trees and brush, reducing the fuel ladder to contain the spread of the blaze.

Facing a force of nature, the island's state and federal agencies turned to Vares Contracting for help in keeping the lights on and the fire at bay.

Lisa Vares of Vares Contracting is no stranger to fire prevention. For years, Vares Contracting had cleared the brush under the main transmission line of the Maui Electric Power Plant, or MPP, in Maalaea two to three times a year.

The main transmission line that controls bringing power up to a good quarter of the entire population of the island, runs off this one line, Vares said.

However, when the Maui Electric parent company changed, this 2.5-mi. access road underneath the main transmission line had not been cleared in more than two years. This led to the entire span of the access road being clogged with five times more vegetation than normal. With cane grass reaching over 7 ft. tall and overgrown brush enlarged to be tree-sized, the extra-crispy fallow fields were perfectly conditioned to act as kindle.

When Vares Contracting was called to clear the transmission line and access road vegetation, Edward Vares responded to the thick brush.

"We roll up to the power plant, clear a nice big, long rectangular acre or two, that's kind of our base area to start with which backs up onto the walls of the power plant."

Just as fires were breaking out across the island's flat and narrow isthmus, Vares, unaware of the looming danger, was clearing the area surrounding the island's only power plant. Part-way through clearing, Lisa Vares got word from the Maui Fire Department (MFD) that a fire was coming right for the Maalaea power plant, and for Edward.

Edward had enough time to get the excavator he had been working with tucked against the MPP's exterior concrete wall, hoping the MFDs efforts would shield it from the fire.

"It was just a firestorm. There was nothing the firefighters could do, the only thing that could stop the fire was bulldozers… and the fire department doesn't have any bulldozers. General contractors like ourselves just automatically show up with bulldozers because that's what you do on a small town."

Luckily for the fire department and the island, Vares Contracting had a fleet of equipment, including D4 bulldozers, to knock down the piles of burning tree stumps, as well as a Komatsu PC300 excavator and a Case TV380 compact tracked loader — both equipped with Fecon Bull Hog mulchers — ready to tackle the flames.

Vares' TV380 has a BH085 mulcher equipped with the FGT rotor head with double carbide tip teeth. Its drum-style configuration with a spiral tool pattern cuts through fibrous brush without clogging. And at 7 ft. wide, the BH085 is wider than the tracks on the TV380, reducing unneeded wear and tear on the rubber tracks. The Fecon Bull Hog's design and the nimbleness of the CTL would prove critical in fighting and containing the blaze.

Preparing for the Worst

After a night of battle between the MFD and the raging fire, Vares returned to the equipment, prepared for the worst.

"Through the night they're like telling us the Maalaea power plant's being evacuated; prepare for wide-scale electrical outages."

Expecting total destruction, Vares was surprised to find the equipment had not only survived, but that the fire break, created just the day before, had prevented the blaze from shutting down the power plant and given the fire fighters a defensive point from which to hose down the blaze.

While the building survived, several of power poles along the main transmission line had fallen in the fire.

"When we showed up the next day our equipment was still there, but all of the power lines are down and all of the trees that they were surrounding what we were coming in to clear anyway are down."

Downed lines prevented anyone, including firefighters and electrical employees, from getting through the access road to repair the lines and restore power. Vares' job, to clear the brush choking the access road and around the transmission lines, had just become a whole lot harder, and more important.

Vares immediately got back to work.

"We started the next day before the fire was even contained or extinguished. We just went in directly after the fire... and first, exposing, getting through all the transmission lines so that the pole crews can come back in and put the poles back up and get energy back up again."

Edward and Lisa Vares worked with a team from local Maui Fire Department and out-of-state National Park Federal fire fighters, some from as far as Washington State, to tackle the blaze.

Vares' team would clear the brush around downed transmission lines so that power plant crews could restore the line — and the power. Brush clearing also lessened the chance that a shift of wind would send the fire back their way, by removing smoldering kindling and embers or at least reducing the amount of remaining vegetation that could catch fire.

The specialized work of clearing land could only be accomplished with a professional team and professional equipment, including the Fecon Bull Hog BH 80EXC forestry mulcher attached to a Komatsu PC300 30-ton excavator.

Vares' team worked in step with the MFD to control the blaze in the immediate surrounding property. One hot spot that proved challenging to control were the old-growth Kiawe trees at the corner of the Maui Power Plant facility. The fire at the ground level refused to extinguish, even after four days of continuous water drops from helicopters.

The State of Hawaii Department of Land and Natural Resources' Forestry Division asked Vares to bring their excavators to the active fire location and remove all vegetation, a massive request that could only be accomplished with their top-line equipment.

Working quickly to clear and mulch down terrains in or near active burn sites, it was critical that Vares had visibility as an operator. In his Komatsu PC300, and Case CX75, both equipped with a BH80 EXC mulcher, he sits higher in the machine, as opposed to sitting lower in the cab of a compact track loader. Up in the cab of the excavator, he was able to look down on what he's clearing and keep an eye out for any smoldering brush.

In an emergency push, Vares cleared a 100 ft. wide by 600 ft. long chunk out of the forest. Carving a clearing from the dense, tangled forest — which previously presented challenges for Federal Firefighters to traverse on foot — separated the still-burning fire line from the border of the MPP facility.

"This process was super risky, because we had to move our equipment into a tangled, tall forest that was still on fire, mulching our way in as we went."

The fire department followed behind them, putting out pop-up fires.

With their feet to the fire — literally — it was critical that Vares' team had equipment that worked quickly and efficiently.

Fecon's Bull Hog made short work tackling Kiawe, the most common type of thorny hardwood trees in Maui and was critical in clearing to prevent the fire spreading.

Time and durability was critical. Armed with three decades of experience operating heavy equipment, and more than 9,000 hours of mulching experience, Vares Contracting tackled the stubborn fire area, freeing up the MFD helicopters to address other stubborn hot spots and created an immense fire break at the MPP facility's most vulnerable boundary corner, protecting the facility from further fire threat.

Even with constant exposure to ash, water and constant use, the Fecon Bull Hog handled nicely. The double-sided carbide design meant that when Vares hit something unforgiving, chances are that only one side of the M-shaped tooth will take damage, and the tooth will remain usable. If tools did break, the single-bolt tool fastening provides easy service: a single Allen head bolt at the rear easily torques perpendicular to the rotor head, reduces the need for a big torque wrench and a bucket of elbow grease.

"Everything really maintained wonderfully, performed beautifully. The skid steers handled everything worked like a charm, exactly like it was supposed to."

When faced with a force of nature, it was all-hands with government agencies — both local and visiting — and with contractors like Vares, and even their fleet of excavators with the Fecon Bull Hog BH085 and BH80EXC forestry mulcher.

With the smoke cleared, landowners and government agencies alike can look to the future to prevent the next wildfire. After showcasing the importance of creating fire breaks and the power of the Bull Hogs, the fire has died down, but the opportunities for mulching are heating up.