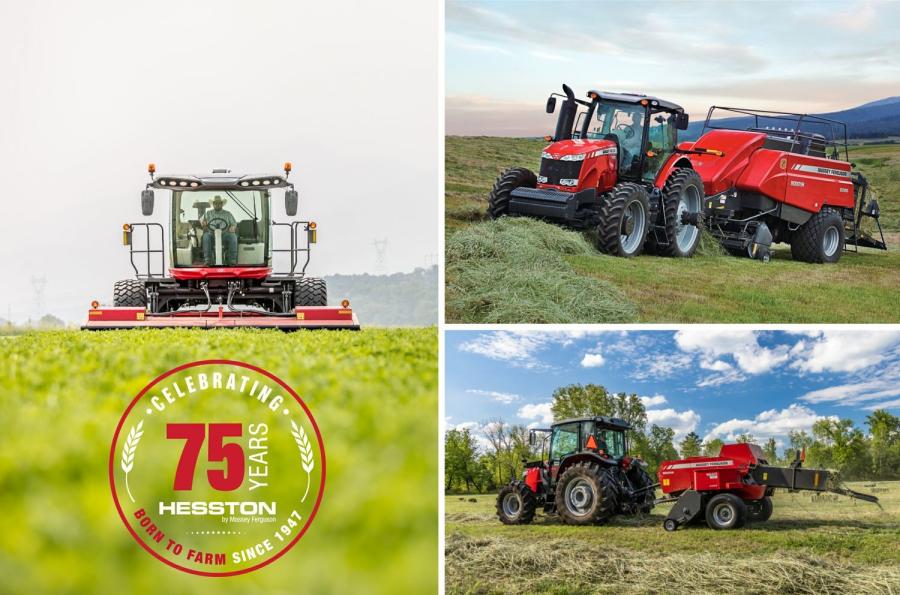 Hesston by Massey Ferguson celebrates 75 years in 2022 with products that continue to provide farmer-focused innovations for hay and forage needs. The brand is well known by farmers across North America for its self-propelled windrowers, balers, mowers, and rakes.

AGCO Corporation, a global leader in the design, manufacture and distribution of agricultural machinery and precision ag technology, celebrated the 75th anniversary of Hesston by Massey Ferguson in 2022.

The equipment manufacturer began in 1947 when a farmer and manufacturer came together to solve harvesting inefficiencies. Since then, the company has kept producers at the heart of every user-friendly, highly productive product design it has produced. As Hesston by Massey Ferguson reflects on 75 years in business, the company continues to build on its legacy of innovation, promising revolutionary new products in 2022 and beyond.

Hesston Machine & Manufacturing was founded in Hesston, Kan., in 1947 by Lyle Yost and Adin Holdemann. Yost, a farmer and contractor, recognized inefficiencies unloading grain from combine grain tanks. Working with Holdemann, a manufacturer, he developed a new method based on an unloading auger that increased productivity and safety for this important task. The company continued to produce innovative non-powered implements that revolutionized grain harvesting.

In 1955, the company entered the hay industry with the first commercially available self-propelled windrower — the Hesston Model 100, which increased productivity and hay quality and encouraged the company to specialize in hay harvesting equipment. Today, Hesston by Massey Ferguson is recognized across North America as an innovative leader in hay equipment manufacturing.

"As a specialized hay equipment manufacturer, we have cultivated a deep understanding of the hay industry and hay producers, allowing us to lead the way with the right products at the right time."

Over the last 75 years, Hesston by Massey Ferguson has introduced many revolutionary products that improved hay production and quality for both commercial and traditional operations. Important developments in this lineage include:

"By focusing on the farmer in the field, Hesston by Massey Ferguson has remained at the forefront of the hay industry for 75 years and promises tremendous value for customers in the decades to come," LeCroy said. "To date, the company holds more hay inspired patents than any other manufacturer."

Looking to the Future

The facility in Hesston, Kan., continues to manufacture some of the most cutting-edge hay equipment in North America, including the company's very popular windrowers, balers, and combines. An additional investment of $45 million in 2013 added a new paint facility.

"We are proud to be a part of 75 years of straightforward, dependable equipment manufacturing and a cornerstone in the Hesston, Kansas, community," said Seth Beytien, director, supply chain, plant lead for Hesston by Massey Ferguson. "We look forward to the next 75 years of farmer-focused innovation as North America's leading hay equipment manufacturer."

Today the Hesston, Kan., facility is AGCO's number one location in North America for manufacturing implements and combine harvesters. Hesston by Massey Ferguson continues a tradition of innovative engineering, producing revolutionary and timely hay equipment, including the release of the new WR Series self-propelled windrower in 2022.