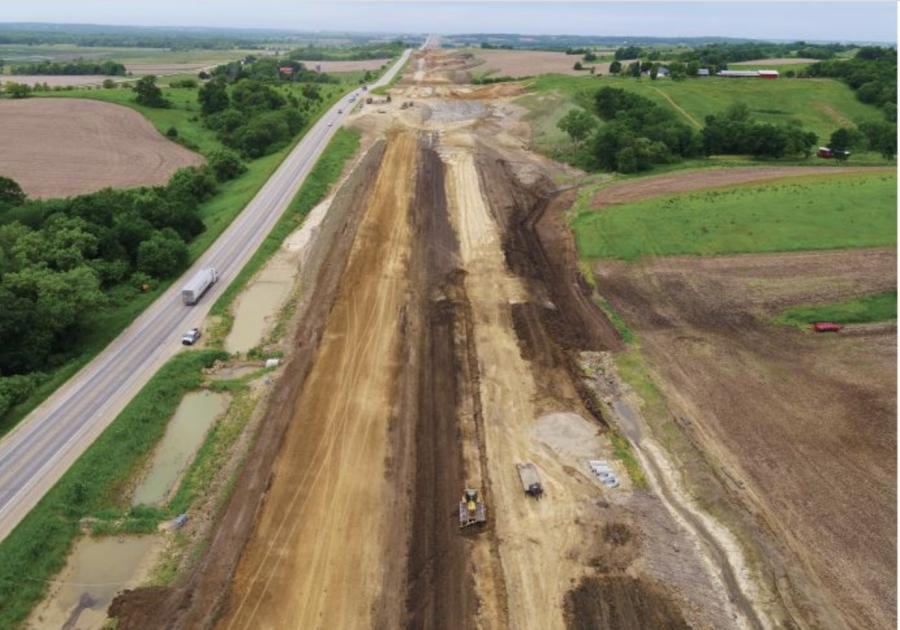 When Iowa DOT is constructing or moving a road, it often needs to move earth.

At the Iowa Department of Transportation, the preservation of limited natural resources is one element considered when planning construction projects. When Iowa DOT is constructing or moving a road, it often needs to move earth. As good stewards of the land, precautions are taken to assure that the disturbed ground does not erode, or the sediment wash away only to end up in another area.

Some of Iowa's frequently used erosion and sediment control techniques include fabric silt fences to slow water flow and collect sediment, wattles (porous mesh tubes filled with straw or other material to control stormwater flow and reduce soil degradation), sediment basins (or small retention ponds) to hold water until solid materials can settle to the bottom and rock check dams.

While officials of Iowa DOT were convinced these elements help control erosion and sediment, it wasn't clear whether these were the most effective or whether there were other approaches that could be undertaken to achieve better or less expensive results.

Melissa Serio from Construction and Materials teamed up with Mike Perez, a researcher with Iowa State University to develop a research project to help us take a look at Iowa DOT's erosion and sediment control practices.

"We didn't want this to be research that just sat on a shelf. We worked with Mike to get an idea developed that would give us practical and implementable steps to improve our erosion and sediment control practices," Serio said.

With funding from the Iowa DOT's research bureau, researchers studied a range of erosion and sediment control methods over two construction seasons on Iowa DOT construction sites to determine which worked best and what needed improvement. Researchers also looked at alternative erosion and sediment control techniques and adaptations that other transportation agencies have used with success to see how well they compare with standard practices in Iowa.

Throughout the project, the research advisory committee consulted with industry partners and DOT construction field staff.

"It was important to understand the feasibility of possible changes to practice and identify the right improvements that could be put in place at the right price," said Serio.

While some of Iowa's existing techniques already performed well, several potential improvements became apparent. On wattles, a nondestructive staking technique to hold the mesh tube in place; stapling the wattle to the ground to maintain good contact; and using an erosion control blanket underneath to discourage stormwater from scouring a channel below it, proved to be successful.

Simple adjustments to silt fences included reducing the space between posts; adding wire support to the fence's fabric backing; and cutting a notch, or weir, at the top of the fence so that overtopping of water could be directed to the most desired location. These improvements are detailed with images and diagrams in the investigators' final report and technology transfer summary.

Researchers also studied the cost efficiency of these improvements. By looking at the cost of a specific wattle or fence configuration in terms of dollars per cubic yard of captured sediment, it became clear which new techniques captured a lot more pollution for just a little more cost.

Even as the research pointed to potential new best practices, it also challenged expectations. For example, sediment basins appeared not to be as effective a sediment control measure as had been previously thought. In fact, some data collected suggested that water leaving the basins might have more sediment than it had when entering.

Further research in a controlled environment will provide more insight, but these initial findings are extremely valuable as Iowa DOT seeks to maximize the effectiveness of its erosion and sediment control measures.

Putting It to Work

Iowa DOT plans to include the most effective and cost-efficient erosion and sediment control treatments identified in this research project as part of standard road plans in the near future — mostly likely beginning the spring of 2021.

Findings on the limitations of sediment basins for sediment control have spurred a follow-up research study, which is being conducted by Perez. Basins built and tested in an outdoor laboratory setting will help understand if they are an effective tool or if alternative approaches are needed. Data collection and monitoring will occur in 2020 and 2021, and the report is expected to be completed in early 2022.

Other findings and greater details are available in Iowa DOT's new research brief, as well as the investigators' final report and technology transfer summary.