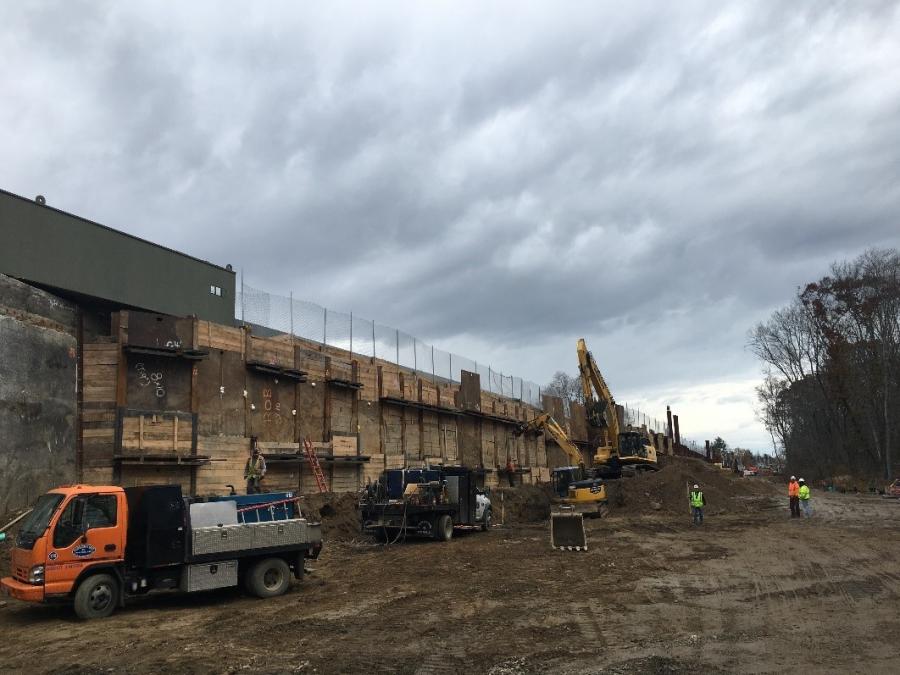 P. Gioioso & Sons of Hyde Park, Mass., is the lead contractor on the Weymouth and Abington project with D&R Contracting of Melrose, Mass., focusing on the road paving.

P. Gioioso & Sons of Hyde Park, Mass., is the lead contractor on the Weymouth and Abington project with D&R Contracting of Melrose, Mass., focusing on the road paving. 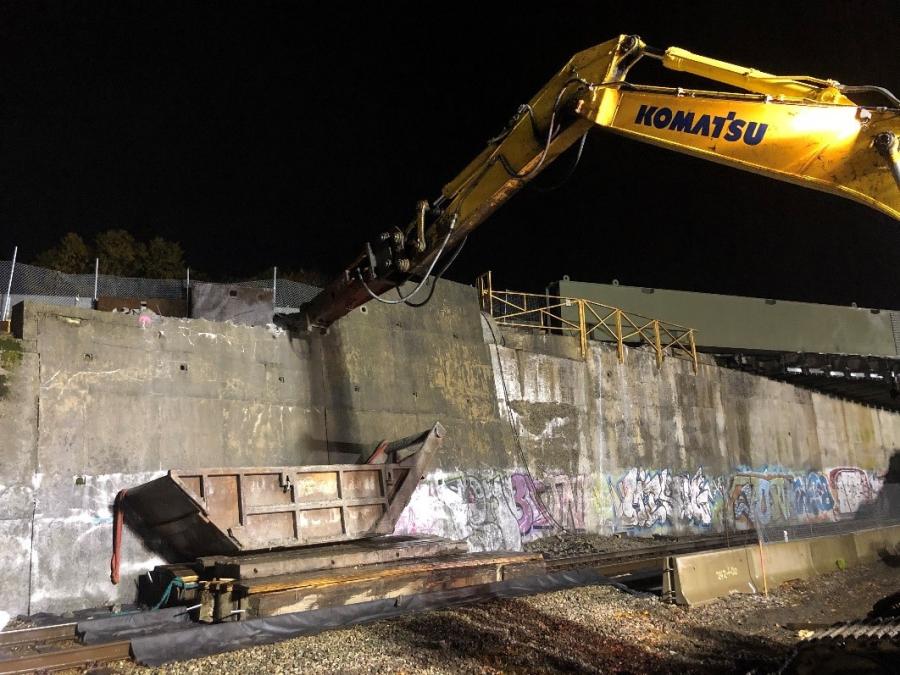 Construction began in the fall of 2017 with a completion of late 2022 scheduled. The budget for the job is $68 million with the bulk being paid by the Federal Highway Administration with the balance from state and local funding.

Kristen Pennucci, MassDOT spokesperson, said the contractors are currently working on road widening and site work at the bridge. Drainage basins are completed and drainage work to tie into the basins is ongoing. Partial demolition of the bridge was completed in August 2019 during a weekend vehicular shutdown. Drilled shafts are currently being installed for the new bridge. All new utility poles have been installed and a majority of utility relocation has been completed along the entire corridor.

The contractors will continue working on road widening and rebuild the bridge and its associated components for use in its temporary and permanent locations. Then final paving will be completed along with complete utility relocation.

Route 18 is being widened to improve safety and reduce congestion on the arterial road south of Route 3. Route 18 will be widened to four lanes throughout the corridor, two in each direction. The current roadway varies in width and its narrowest width is less than 30 ft. with two vehicle lanes, minimal shoulders and no sidewalks. The proposed roadway consists of four 11.5-ft. travel lanes, two 5-ft. shoulders and two 5.5-ft. sidewalks. Part of the widening includes the construction of sidewalks and shoulder/bicycle lanes along both sides of the roadway.

The current bridge was built in 1935 and is single span, approximately 140-ft. long with a severe skew. The proposed bridge will be approximately 360-ft. long with four 11.6-ft. wide lanes with 5-ft. wide shoulders on each side, two 5.6-ft. wide sidewalks with protective screens and standard vehicle barriers with protective screens and improved horizontal clearance for the trains below. 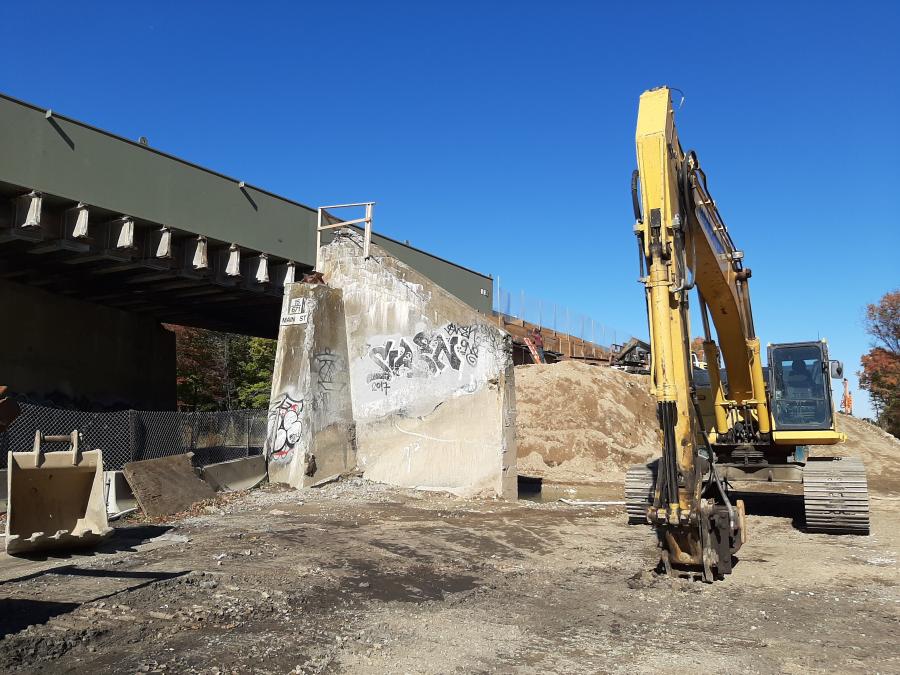 Accelerated bridge construction is being used to complete construction sooner and minimize impact to drivers. Part of the process will be a lateral bridge slide that will move the bridge from a temporary to permanent location with rollers and jacks. The new bridge will be built in a temporary location next to the existing bridge, which will allow drivers to use the new bridge in its temporary location while the existing bridge is being demolished. The new bridge will then be slid into its permanent location.

The new bridge is scheduled for completion in August 2021, according to Chris Evasius, a MassDOT assistant construction engineer.

The use of Accelerated Bridge Construction technology for the Weymouth/Abington project is the latest in Massachusetts.

MassDOT notes it has used ABC on the Quincy/Weymouth Fore River Bridge project in 2017 to construct the center lift span and float it into place using barges. Self-propelled mobile transports were used, which allowed the contractor to walk the span from land directly onto the barges. The moving of the barges was timed to take advantage of the rising tides to lift the span to the proper elevation and it allowed multiple work activities to take place at the same time to lessen disruption to the motoring public.

ABC techniques also were used on the Boston-Commonwealth Ave. project in 2018. The project involved replacement of the superstructure of the Commonwealth Ave. Bridge over the Massachusetts Turnpike. The work was broken up into two separate seasons using ABC. Prefabricated bridge units were used to construct the superstructure. They consisted of steel girders with precast deck panels that were lifted into place for the bridge deck. 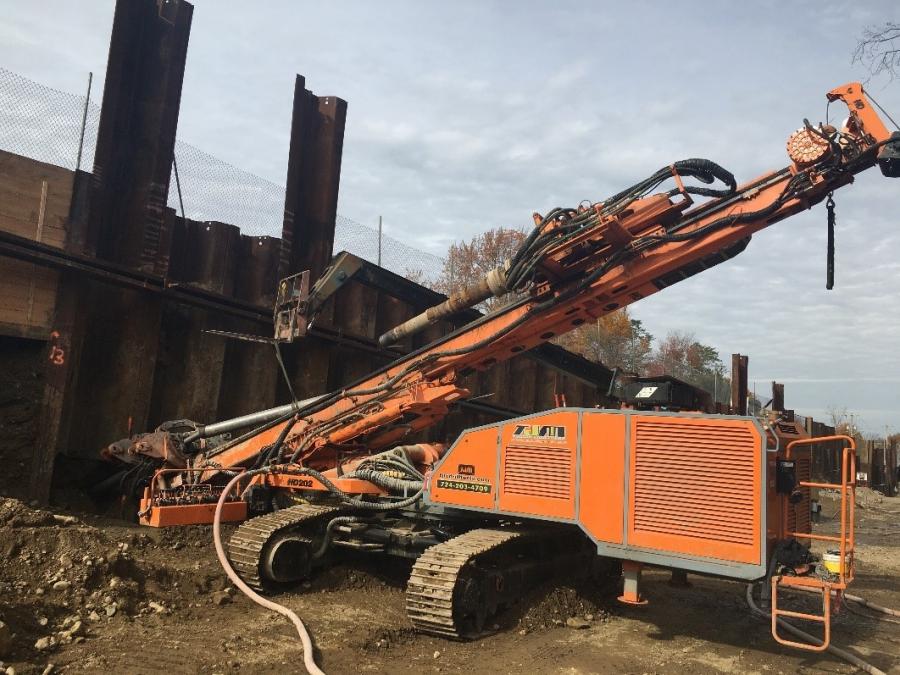 The contractor for the Fore River Bridge project was White/Skanska/Koch JV of Framingham, Mass., with a bid amount of $244.6 million.

The contractor for the Boston-Commonwealth Ave. project was Walsh Construction Co. of Norwood, Mass., with a bid amount of $81.8 million.

In 2008, MassDOT launched the Accelerated Bridge program after the Massachusetts Highway Department and the Department of Conservation and Recreation determined there were 543 structurally deficient bridges in the state with the number expected to climb to almost 700 by 2016. Legislation was passed to reduce the state's backlog below 450 by 2016 and as of Sept. 1, 2018, 191 projects have been completed with others in construction.

"The Accelerated Bridge program represents a monumental and historic investment in Massachusetts bridges," the organization said. "Over the next eight years, nearly $3 billion in funding will be accelerated to improve the condition of bridges in every corner of the Commonwealth. With plans to repair or replace over 500 bridges, including five mega-bridge projects [valued at more than $1 billion], this program will greatly reduce the number of structurally deficient bridges in the state system, while creating thousands of construction jobs. To complete this program MassDOT and DCR will rely on the use of innovative and accelerated project development and construction techniques." CEG