NC's $1.7B Northern Beltway Faces Another Decade of Construction

One of North Carolina's largest and most complex road projects has been ongoing since December 2014 and, although a few sections have been opened, its final completion date will still not occur until sometime in the 2030s.

The 34.5-mi.-long, $1.7 billion multi-lane freeway, known as the Northern Beltway, is being built around the city of Winston-Salem to help ease traffic for the 100,000 cars and trucks that pass through the area daily.

First conceived in the 1960s, the Beltway was originally funded as part of the 1989 Highway Trust Fund bill in the state General Assembly, one of seven urban loops included in the law, according to the North Carolina Department of Transportation (NCDOT).

"The purpose of the Northern Beltway was to reduce traffic and boost safety on major transportation corridors running through Winston-Salem, like north-south U.S. 52 and east-west U.S. 421," said Pat Ivey, the division engineer of NCDOT's Highway Division 9. "But other busy city streets and roadways, including Silas Creek Parkway, Robinhood Road, NC 67/Reynolda Road and Yadkinville Road, also would see benefits from the project.

"Then, in the early 2000s, the decision was made to route the congressionally approved I-74 corridor along the eastern section of the beltway," he added.

That decision may have been the key to gearing up work on the roadway, as state officials had been looking to connect three incomplete sections of the interstate that passes through North Carolina from Iowa to Myrtle Beach, S.C.

The massive road and bridge project is being managed by the NCDOT and constructed by a joint venture of Flatiron Construction, with a regional office in Morrisville, N.C., and Charlotte-based Blythe Development Corporation.

The Northern Beltway is an elaborate building effort in that many key highways and roads either cross or intersect with it. In addition, the land acquisition for the freeway's construction was tied up for years in legal disputes, causing delays in its start.

Engineers at NCDOT designed it to be built from Interstate 74/U.S. 311 on the city's southeast side and taking it on a westerly heading through the communities of Kernersville, Walkertown, Rural Hall, Lewisville and Clemmons — all while staying along the fringes of Winston-Salem — before connecting with U.S. Highway 158 southwest of the city.

The Beltway is not a closed loop project, though, as each end of the construction connects with heavily trafficked roadway to the south of Winston-Salem, among them two long-established freeways, I-40 and U.S. 421, on different sides of the city.

Another notable crossing is the project's intersection with U.S. 52 on the northern edge of Winston-Salem at Rural Hall. That represents the dividing line between the Eastern and Western Loops, as defined by NCDOT, and is currently the site of the heaviest construction. It also is the point where I-74, following U.S. 52 south from the Virginia border, will separate and become what is now the eastern section of the Beltway before intersecting with an existing stretch of the interstate south of Kernersville. 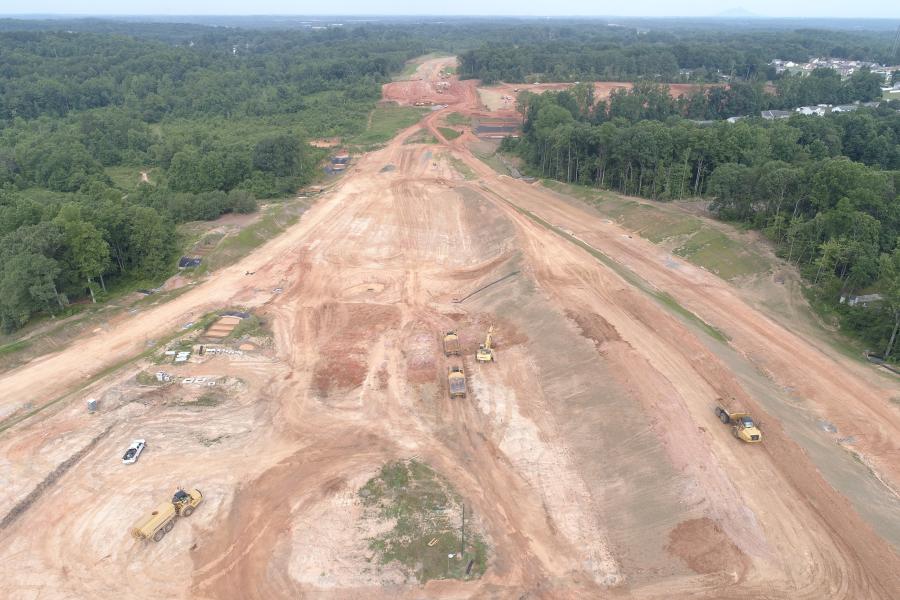 The Beltway's two loops were created by the state to spread out the project's funding and construction, and they, in turn, have been divided into separate construction zones, each with their own timeframe.

The road and bridge building happening on the Eastern Loop covers 17.6 mi. and has eight sections, in various stages of construction.

The slightly shorter Western Loop, at 16.8 mi., is made up of 10 sections, most of which are several years away from being under construction. Six of the 10 will not begin work until at least October 2027, starting with the section between U.S. 52 and NC 67/Reynolda Road, NCDOT reported.

That is not to say that crews have not finished and opened any part of the Beltway after seven years of effort, however.

In addition, Ivey noted that a bridge on Hastings Hill Road over U.S. 421/Salem Parkway in Kernersville is completed. North of Winston-Salem, a new interchange at U.S. 52 and NC 65 is finished, and contractors have completed two bridge replacements over Muddy Creek and a major upgrade to the interchange at Peace Haven Road at U.S. 421, both within the Western Loop.

The 7-mi.-long stretch between U.S. 311 and U.S. 52 in the Eastern Loop is currently seeing the most construction, Ivey noted, while the last two future projects between U.S. 421/Salem Parkway and I-74 will be let to contract this December, and October 2022, respectively.

Flatiron is currently working on the I-74/Eastern Loop segments known collectively as U-2579 DEF, which runs from U.S. 311 near Walkertown to University Parkway due north of Winston-Salem. It includes interchanges at University, NC Highway 8/Germanton Road, Baux Mountain Road and new bridges on NC 66, Davis Road and Stanleyville Road.

This section of the construction is a greenfield, new interstate location that includes 10, two-span concrete girder bridges. 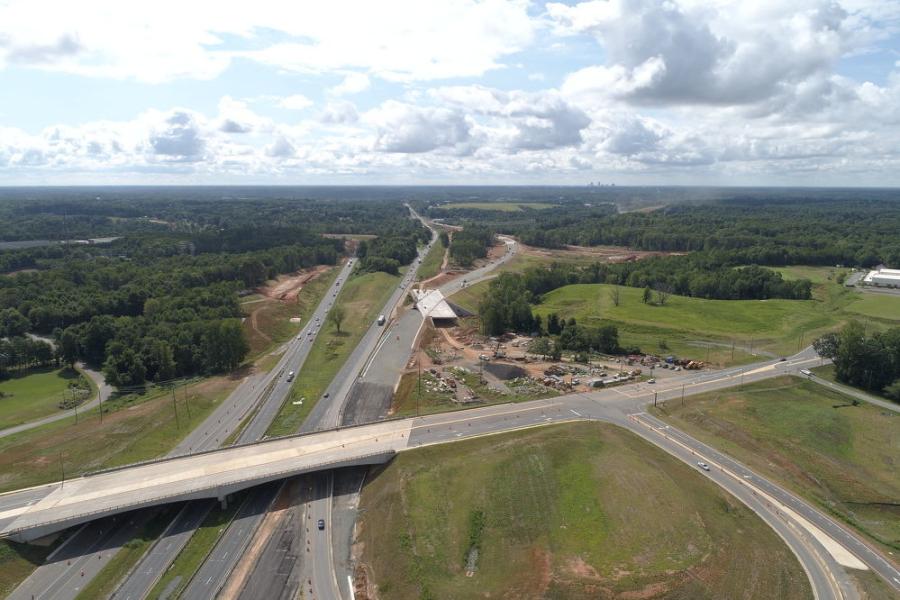 "We are progressing very well on the project," said Kristofer Edelberg, Flatiron's project manager at the work site. "The favorable weather we have had this season has certainly helped us move the construction forward. We put a plan in place to deliver this project for the NCDOT and our entire team has been executing at a very high level to keep on track to meet the Fall 2022 deadline."

He said that at six of the Y-line locations (survey lines for roads other than the main line) on Flatiron's portion of the Eastern Loop, a new bridge was constructed to route traffic over the primary highway.

"These were a mix of new builds slightly off the existing alignment and the bridge being built back within the existing footprint of the Y-line," said Edelberg. "At Old Walkertown Road, for instance, new bridges were constructed to route future I-74 traffic over the Y-line. There was demolition of several existing bridges required for this building project.

He outlined the amount of work Flatiron was contracted to perform on U-2579 DEF:

"The project is on track to complete 95 percent of the earthmoving; 70 percent of the soil stabilization; 60 percent of the asphalt paving; and 45 percent of the sound barrier walls by the end of 2021," Edelberg said when interviewed in September, adding that all the Beltway bridges within the three subsections his company is responsible for have been completed, although not yet opened.

Flatiron is subcontracting key pieces of the I-74/ Eastern section work to several companies in North Carolina, including Mount Airy-based Smith-Rowe to perform most of the embankment excavation; Site-Prep in Monroe to handle soil stabilization; Winston-Salem's APAC-Atlantic plant for its asphalt; and Martinez Construction in Burlington for the sound barrier wall installation.

Edelberg said that his company self performs the building of all bridges, culvert and drainage itself as well as mainline ABC stone placement and Y-line grading activities. The contractor also brought its own Liebherr crane to the site to lift all bridge girders.

He noted that Smith-Rowe has utilized two different equipment spreads to move most of the embankment on the project, one of which consisted of Cat 631 scrapers, and another utilizing Cat 745 articulated trucks. Smith-Rowe also owns most of its heavy equipment.

Flatiron's partner firm on the Northern Beltway, Blythe Construction, is working nearby at what is known as the R-2247 EB component of the project, beginning just east of the intersection of the new interstate and U.S. 52.

Besides being the connecting point of the Beltway's two sections, R-2247 EB has been designated by NCDOT as part of the Western Loop. When finished, it will allow traffic from the southeast to continue north along I-74/U.S. 52 toward Virginia or remain onward to Winston-Salem's western suburbs on what will be called I-274.

Nick Librandi, an assistant regional engineer of NCDOT, said the recently finished southbound U.S. 52 alignment will open work in 2022 to build the new northbound alignment as well as provide access to the middle portion of the I-74 interchange. 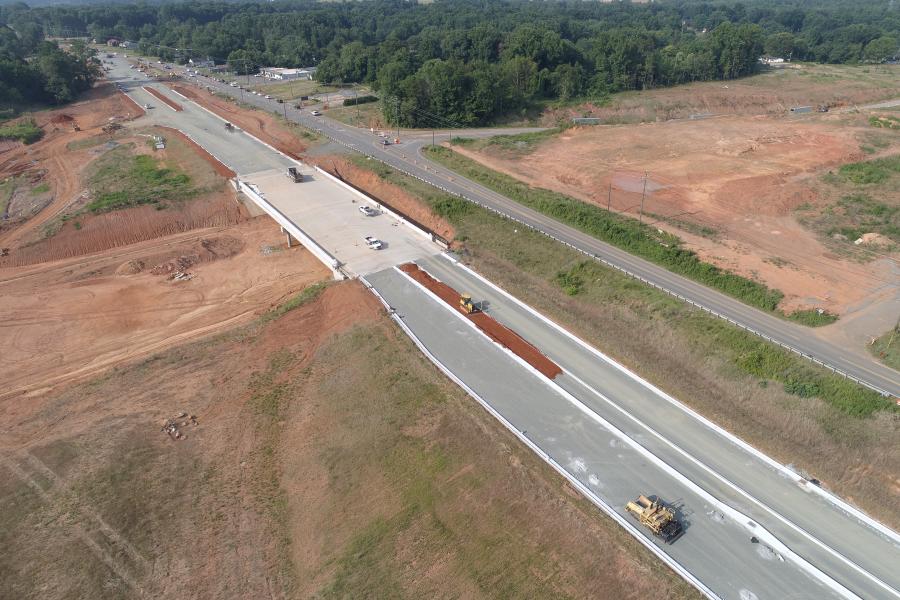 Four bridges have been completed and 1 million yds. of excavation had been moved by mid-September, according to T.J. Coyle, Blythe's project engineer at U-2247 EB.

Among them is a scissor bridge, different from most road bridges in that its girders run perpendicular to the traffic crossing above, rather than running parallel as they do on most bridges. This type of structure is uncommon because it uses only a small portion of the deck's surface for travel lanes and its cost limits it to be built at a tighter than 90-degree skew.

Coyle characterizes the scissor bridge as the project's most interesting feature, one of only three in the state.

"While it appears odd that there is a large section not bearing traffic, it has the benefit of reducing metal girder size, thus reducing cost as well as helping to control grade by reducing span heights," he explained.

Coyle also noted his crews are installing a 1,425-ft. box culvert critical to the opening of the new I-74 mainline. The 8-ft- by 7-ft box culvert was more than 50 percent complete in September and is an average of 30 ft. in the ground, he said.

Blythe released a list of figures illustrating its contracted work on U-2247 EB:

"Our biggest challenge is building a continuous roadway while keeping traffic moving through the project," Coyle said. "The Beltway project also had a large natural gas transmission line that we needed to have relocated; the maintenance and monitoring of all those erosion control sites; three bridges over a railroad that required demolition; and another five new bridges to be built across the same rail line."

According to Coyle, the earthmoving done by Blythe and its subs have consisted of Cat D4, D5 and D6 dozers, alongside Cat's model 336 excavators; model 289 skid steers; and the manufacturer's model 725 and 730 off-road dump trucks. He also noted the use of Volvo L90 wheel loaders on site and bridge-building equipment that includes Link-Belt cranes ranging in size from the large TCC 1200 five-section boom to 298s lattice crawlers and rough terrain cranes.

The Northern Beltway is the eighth construction project undertaken by the joint venture of Flatiron and Blythe.

Flatiron Construction is a heavy civil general contractor that works across the United States and Canada, with North Carolina projects being its primary focus in the Southeast/Mid-Atlantic region, according to Edelberg. Its emphasis on major highway and bridge construction projects has made it a go-to contractor in the region.

At 100 years old in 2021, Blythe Construction began as a small asphalt company before expanding its resources and influence through significant mergers across the years. Eventually it became part of the Eurovia USA network, a move that extended Blythe's range from Maine to Texas. CEG