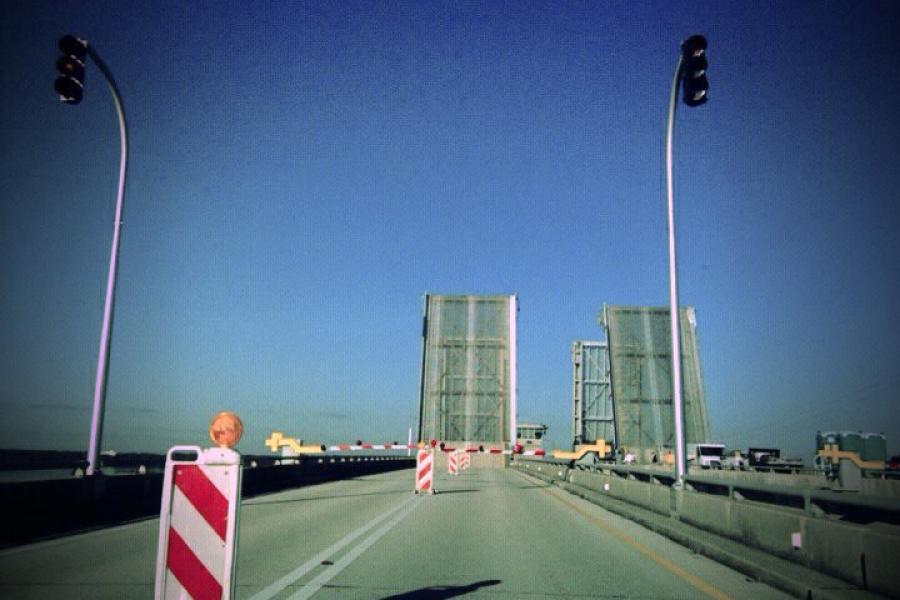 A coalition of organizations continues to push forward with the replacement of the aging drawbridge at Kennedy Space Center (KSC), a project that offers a glimpse into a possible future when NASA and the Space Force merge their Florida Space Coast facilities to focus more on their core missions.

According to permitting documents recently filed by the Florida Department of Transportation (FDOT) and NASA, construction of a new bridge that extends State Road 405 in south Titusville to the spaceport is still slated to begin in early 2022.

The existing structure is referred to as NASA Causeway West or the Indian River Bridge.

An FDOT spokesperson confirmed the replacement will span 4,025 ft. and have a minimum clearance of 65 ft., eliminating the need for a drawbridge that often backs up traffic when tall boats need to pass underneath. The current bridge runs 3,000 ft. and only has a 28-ft. vertical clearance.

FDOT estimates the total cost at $126 million, but NASA will only have to foot $13.5 million of the bill — $90 million comes from a U.S. Department of Transportation grant while the rest will be covered by Space Florida, the state's spaceport authority.

The new structure will include two separate bridges with two lanes each. Crews will first build the eastbound lanes to the south of the existing drawbridge, then transition all traffic there. In 2024, the old structure will be removed, and westbound lanes put in its place.

Built in 1964, the current NASA-owned bridge was designed to connect Titusville to Merritt Island. Over the decades, it has carried countless spacecraft, employees, visitors, tourists and other hardware like pad infrastructure and building materials.

These days, it's not just KSC that needs the artery. It also leads to Cape Canaveral Air Force Station, the KSC Visitor Complex and Blue Origin's massive New Glenn rocket factory at Exploration Park. For some companies like Lockheed Martin's Astrotech Space Operations in Titusville, it's the only way to get processed spacecraft across the river and to their respective rockets at KSC or the Air Force station. The company also is renovating a facility near the causeway for heat shield work related to NASA's Orion crew capsule, adding yet another bridge dependent.

A 2017 NASA engineering study determined the existing drawbridge was approaching the brink of what could be considered safe for transporting heavy equipment, though passenger vehicles were not an immediate concern.

NASA officials knew at the time a replacement would cost north of $100 million, a steep figure for the agency focused on its Space Launch System rocket and transitioning KSC to a spaceport with more commercial tenants. But FDOT analyses showed maintaining the current bridge for 10 more years and then replacing it would cost even more: about $156 million.

Space Florida last year applied for the USDOT's Infrastructure for Rebuilding America grant program and secured more than two-thirds of the amount needed to replace the 56-year-old NASA bridge structure. The grant also included money for expanding Space Commerce Way, which leads to the visitor complex and Blue Origin's factory.

With Space Florida assuming responsibility for the project's execution and funding a majority of the remaining $36 million, NASA agreed to state ownership of the new bridge.

The transition alleviates some of NASA's need to focus on projects that aren't intimately tied to space, science and aeronautics.

Looking to the future, it could be the beginning of even more shifting responsibilities.

The Space Force, which oversees the Eastern Range and other space-related facilities across the country, is exploring the possibility of merging Cape Canaveral Air Force Station and KSC to streamline operations.

Like the bridge ownership change, the idea is similar: allow the Department of Defense (DOD) to focus on its core missions of national defense and launch support through new efficiencies and shifting peripheral projects off its books.

The proposal puts increased responsibilities on the U.S. Department of Transportation, Federal Aviation Administration, commercial companies and other organizations like Space Florida to manage future space operations. The new nationwide authority would help establish a strategy for spaceport management and take over launch-scheduling work.