New I-40 Fourth Street Bridge Slides Into Place in Flagstaff 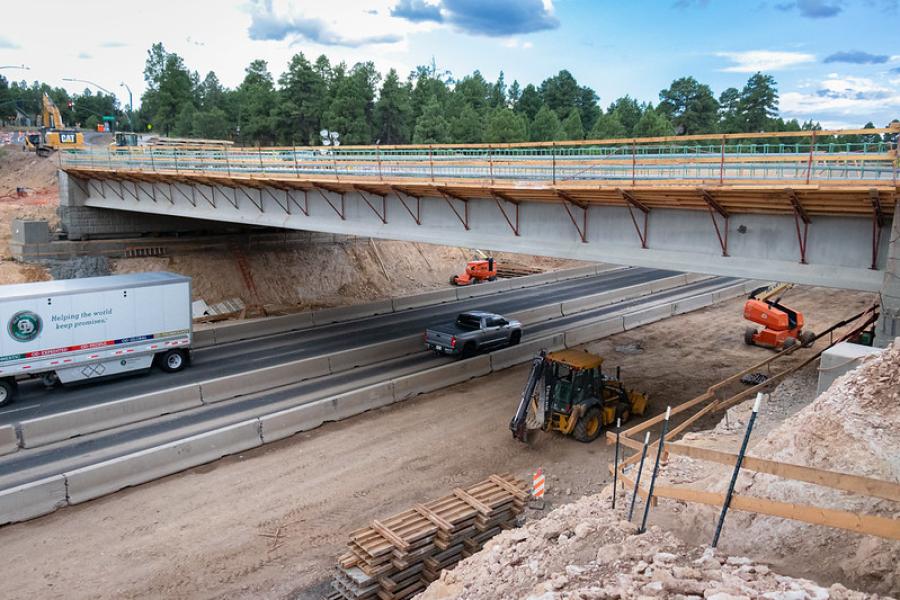 Using an innovative bridge slide technique that accomplishes in days what ordinarily would take months, construction crews have placed a new Fourth Street bridge over Interstate 40 in Flagstaff.

The new, wider bridge will improve traffic flow and have a dedicated path for bicycles and pedestrians connecting the Flagstaff Urban Trail System across the interstate.

For its use of accelerated bridge construction techniques on this project, the Federal Highway Administration granted the Arizona Department of Transportation an extra 5 percent of the construction cost on top of the normal federal allocation under its Increased Federal Share program. The federal allocation applies to the state's costs, and this extra money allows ADOT to put that portion of state Highway User Revenue Fund proceeds toward other priorities.

The city of Flagstaff is paying for half of the cost of the new Fourth Street bridge in addition to covering the cost of landscaping and aesthetic enhancements.

This project also includes a resurfaced bridge deck and repairs to the pavement approaches to the Butler Avenue bridges over I-40. The total cost of the project for both bridges is $13.9 million.

The Fourth Street bridge scheduled its reopening for Aug. 3.

ADOT has been using different innovative methods to accelerate bridge construction for different bridges along I-40. This is the second time ADOT has used the bridge slide. The first time was installing new Bellemont bridges at I-40 and Hughes Avenue, formerly Transwestern Road, west of Flagstaff.

Also last year, the agency used a process known as a geosynthetic reinforced soil-integrated bridge system to rebuild the bridges on I-40 at Meteor City Road, creating abutments by putting in alternating layers of granular fill reinforced with synthetic material. That process also cut construction time by months.