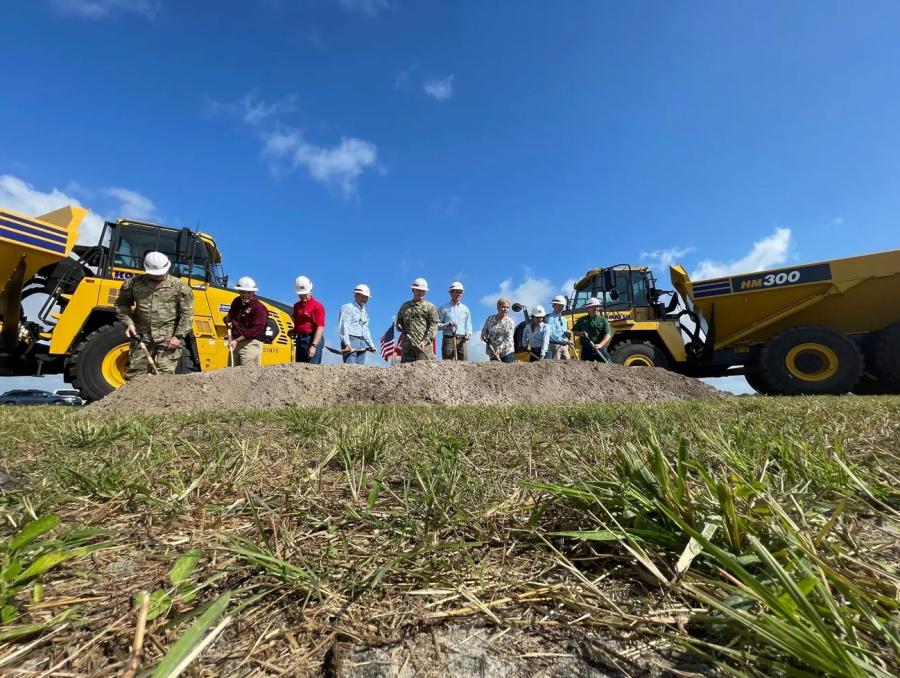 State and federal environment officials gathered in western St. Lucie County on Feb. 18, 2022, to mark the beginning of construction on the C/23-C/24 Stormwater Treatment Area. Once completed in 2025, the marsh will store and clean water before releasing it back into the St. Lucie River. (Max Chesnes/TCPalm photo)

The county's C-23/C-24 Stormwater Treatment Area, approximately 7 mi. west of the Florida Turnpike, will include 1,970 acres of cattails and other vegetation to filter sediment and pollutants such as phosphorus and nitrogen from the water.

Construction on the manufactured marsh — heralded as a "watershed moment for Everglades' restoration" — is the latest in a series of groundbreakings meant to clean the river and neighboring Indian River Lagoon, according to TCPalm.com, the online news service of Treasure Coast Newspapers.

"I can already see the eelgrass in the lagoon," he said. "I see the healthy wetland. I can see the birds and fish. I see our neighbors in St. Lucie and Martin counties making a living, enjoying and recreating in the restored environment."

Clean Waterways Key to All Life in the Area

The marsh is east of the C-24 Canal, which drains into the North Fork of the St. Lucie River. On the canal's west side, one of two reservoirs will store water cleaned by the marsh before it is released back into the ecosystem.

Combined, the reservoirs will store more than four billion gallons of rainfall runoff annually that now drains from an 827-sq.-mi. watershed into the river, polluting it with nutrients, bacteria, herbicides, pesticides and more.

TC Palm reported that the $2.1 billion project will remove 7.9 million cu. yds. of muck from the St. Lucie River and reduce phosphorus by 41 percent, as well as nitrogen by 26 percent. That will help reduce cyanobacteria blooms, commonly called blue-green algae, that sometimes have the toxin microcystin. Such blooms are harmful to people and have killed pets.

Nitrogen and phosphorus can feed blooms, which also kill oyster and seagrasses, USACE noted. The latter is the main food for manatees, which starved to death in record numbers in 2021.

The multi-million-dollar project is "exactly what the lagoon needs," he told TCPalm.

By the numbers, the following is what is to be expected from the restored C-23/C-24 Stormwater Treatment Area:

Federal Government Has Big Stake in the Project

The project was approved in 2000, partially funded in 2007, and fully funded in January by President Biden's infrastructure bill. The White House dedicated $1.1 billion for the Everglades restoration, the largest investment for that purpose in history.

The effort also is part of the Comprehensive Everglades Restoration Plan (CERP) that former President Bill Clinton signed into law in 2000, and Congress funded in the 2007 Water Resources Development Act.

The USACE, working with the South Florida Water Management District, hopes to complete the marsh by 2025.

"Our water quality issues and troubles didn't happen overnight and the solutions to those problems can't be fixed overnight," St. Lucie County Commissioner Frannie Hutchinson said in speaking with TCPalm.com. "Today, I feel like we have given birth to a new beginning and a new start."