Years of unsanctioned jumps into Ohio State's Mirror Lake ahead of “The Game” might now be a thing of the past, but the university hopes other memories at its iconic lake won't have to be. 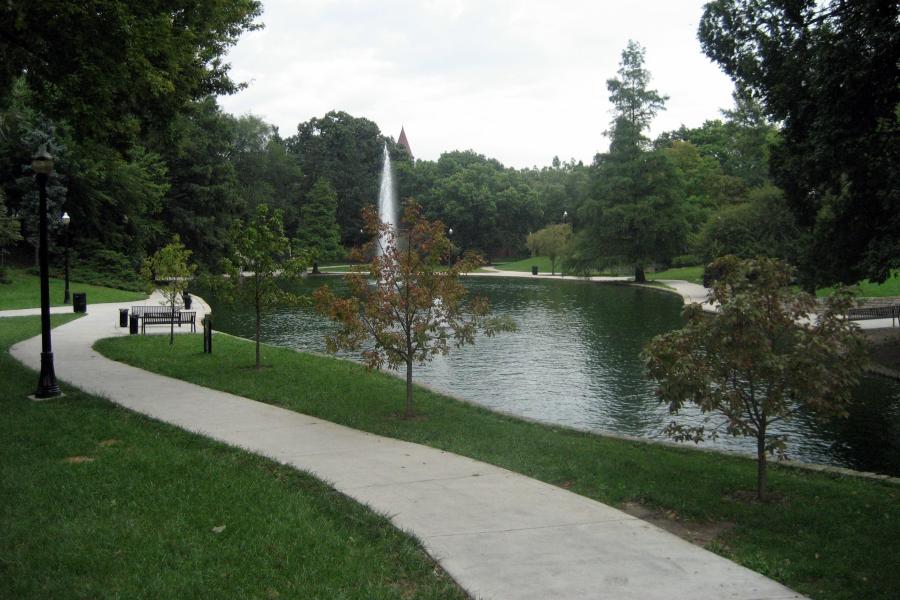 COLUMBUS, Ohio (AP) For some, it was a quiet moment spent beside Mirror Lake between cancer treatments.

For one woman, it was the joy of finding a moment amid the chaos of a football game day to watch the ducks with her father.

Years of unsanctioned jumps into Ohio State's Mirror Lake ahead of “The Game” might now be a thing of the past, but the university hopes other memories at its iconic lake won't have to be.

As Ohio State continues work on an overhaul of its Mirror Lake district, it is asking alumni and others to submit their favorite memories at the lake.

In addition to selling engraved bricks and pavers for the new lake district, the Ohio State University Alumni Association is collecting the memories and working with the university archives so they can be documented and shared, said Jenn Keyes, assistant vice president of annual giving at Ohio State.

“This is a unique chance to, of course, raise funds for the project, but also engage with our alumni about their favorite memories and experiences at Mirror Lake,' Keyes said.

One man in the class of 1983 didn't have any specific memories of Mirror Lake during his time as a student, but wrote to the university that he and his wife “have wonderful memories of it during a not so wonderful time.' Beginning in 2011, his wife had several long stays at Ohio State's Arthur G. James Cancer Hospital, where she was receiving treatment for acute myeloid leukemia.

“The memories of those short visits to Mirror Lake will always be special to both of us as they provided Sandy and I much needed changes of scenery from the hospital. Today, the mention of Mirror Lake takes us back to those visits that allowed Sandy and I short escapes from our reality of those times.'

A 1991 Ohio State grad's best memories at Mirror Lake unfolded long before she was a student there, when she attended football games as a girl with her father.

“Amidst all of the chaos and calamity that would be occurring on game day, we would find time to go sit quietly side by side watching the fountain and the ducks,' she wrote. “No words were spoken, as there was no need, but we both would stand signaling it was time to leave. These are the moments I miss most now that he is gone.'

As the memories roll in, the excavators roll on.

Construction on the $8.5 million Mirror Lake project began in September 2016 and is expected to wrap up this coming spring.

Most of the major demolition work has been completed. Crews have removed the lake's former brick bottom and were working this fall to put utilities in place.

The lake will return to its more natural roots, said Lynn Readey, associate vice president for facilities operations and development at Ohio State.

The lake's edge, which previously had a concrete and stone barrier, will now have a soft clay edge. The project also will incorporate more vegetation surrounding the lake.

“`The project is a reconfiguration of Mirror Lake, which, ironically, takes it back to the state it once was,' Readey said.

The enhancements, including a mechanism allowing all the water to be emptied in about 60 minutes, will add to the lake's overall safety, the university has said.

Previously, a loosely organized tradition brought hundreds of students to Mirror Lake on the Tuesday of Michigan Week. The university never sanctioned the lake jump and sometimes tried to prevent it, but students continued to jump into the lake anyway. In 2015, a student died of head and neck injuries after diving into the lake and Ohio State's undergraduate student government voted to support the university's decision to forbid future jumps.

Renovations at Oxley and Pomerene halls are included in the Mirror Lake district project. The Linguistics Department recently moved back into its renovated home in Oxley Hall.

“One of the biggest changes I think people will see in each of these sites ... they kind of existed somewhat side by side but kind of isolated from each other,' Readey said. “You'll really be able to see the district-like quality."