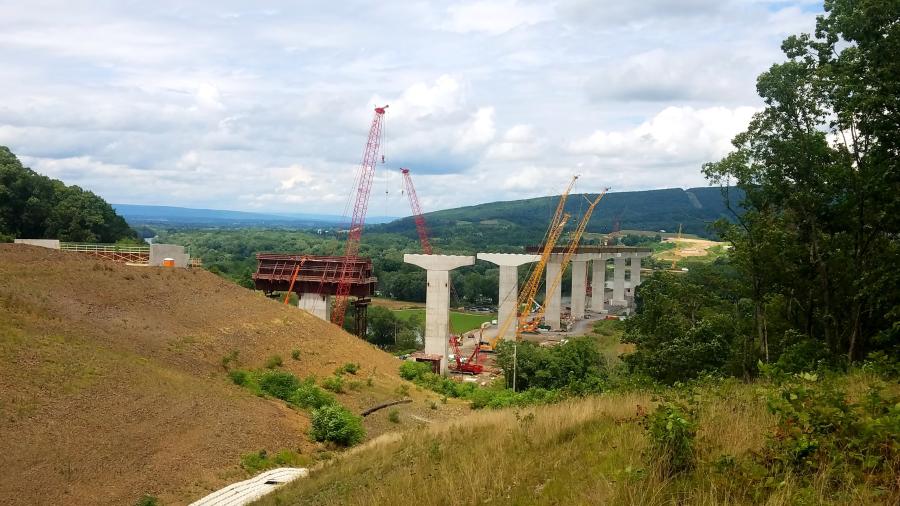 The CSVT project will provide a 13-mi. limited access highway connecting PA 147 in Northumberland County, just south of the PA 45 Interchange, to U.S. 11/15 in Snyder County, just north of the Borough of Selinsgrove. (PennDOT photo)

Described as a testament to the dedication and hard work needed to deliver transportation improvements, the $670-million Central Susquehanna Valley Transportation (CSVT) project will dramatically ease traffic woes and enhance overall travel along the congested Pennsylvania corridor. A $157-million river bridge is the first of several construction efforts planned as part of the enormous undertaking, which is considered the state's biggest new capacity project.

"The CSVT project is long overdue for the area," said Ted Deptula, Pennsylvania Department of Transportation (PennDOT) assistant construction engineer. "Transportation throughout the area will be safer, smoother and swifter when the project is completed." 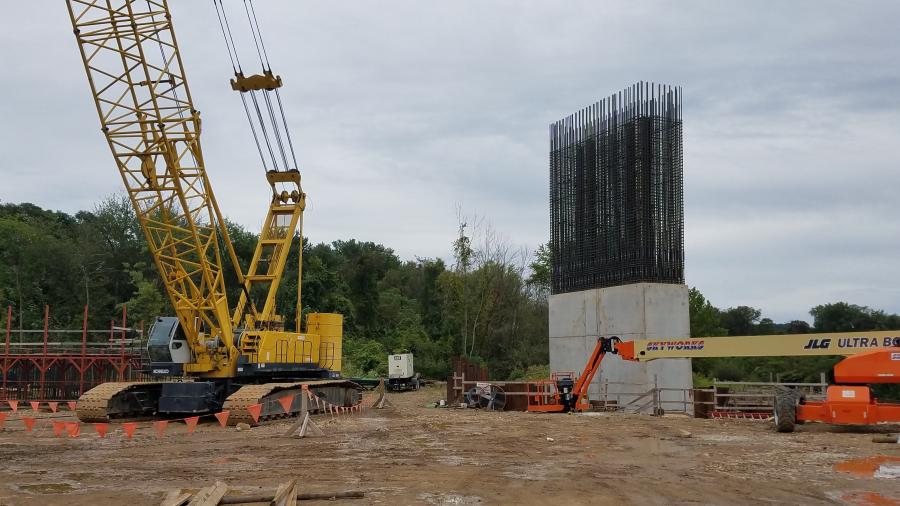 The CSVT project will provide a 13-mi. limited access highway connecting PA 147 in Northumberland County, just south of the PA 45 Interchange, to U.S. 11/15 in Snyder County, just north of the Borough of Selinsgrove. The river bridge will measure more than 4,500 ft. long, with a peak elevation of 180 ft.

"The river bridge is the signature contract," said Deptula. "It's the highest and longest bridge in the area. The size and height of this structure leads to many challenges during construction. Most of the substructure was built using a mass concrete specification which required non-standard concrete mixes and internal cooling of the concrete."

The complex project is divided into two sections. The northern section runs from existing PA Route 147 just south of Milton Borough through a new interchange with existing PA Route 147 providing access to Northumberland Borough across the West Branch of the Susquehanna River, where it has a new interchange with U.S. Route 15 south of Winfield Borough. The southern section picks up at the new U.S. Route 15 interchange and continues south around Shamokin Dam Borough and connects with U.S. Routes 11/15 at an existing interchange just north of Selinsgrove Borough.

The southern section also includes a new interchange and connector roadway to PA Route 61, providing access to the city of Sunbury. Although planning for this new highway originally began roughly 50 years ago, the CSVT project as it's known today began in the mid 1990s with a needs analysis, environmental studies and preliminary engineering. 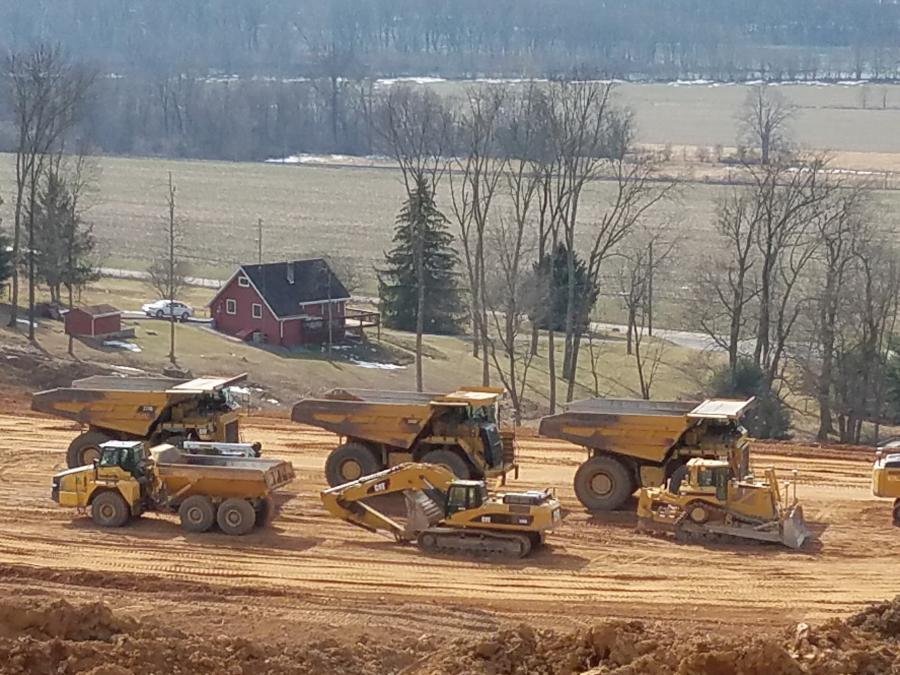 In 2006, officials started final design of the northern section. In 2008, the project was put on hold due to a lack of transportation funding within the state and the need to focus on maintaining the existing roadway system. In 2013, PA Act 89 was passed, establishing a comprehensive transportation funding plan for the state, and final design was restarted for the northern section.

Officials plan to open the northern section to traffic in 2022.

As for the southern section, authorities are currently working to obtain environmental clearance for modifying a portion of the project alignment to avoid two fly ash waste basins. Once that is completed later this year, officials will resume final design. A schedule is still being developed for work on the southern section.

Most of the earthwork is finished, and the majority of the structure work will be completed by winter. Some superstructure work will be finalized next summer, with paving beginning in 2019. Key tasks yet to be carried out regarding northern section work include the bridge decks and paving of the entire northern section. Specific work taking place right now includes girders being placed on the west side of the river bridge. Substructures on the east side of the river also are under construction. Work on the deck will start in 2019.

Piers 9 through 14 are currently under construction on the east side of the river. 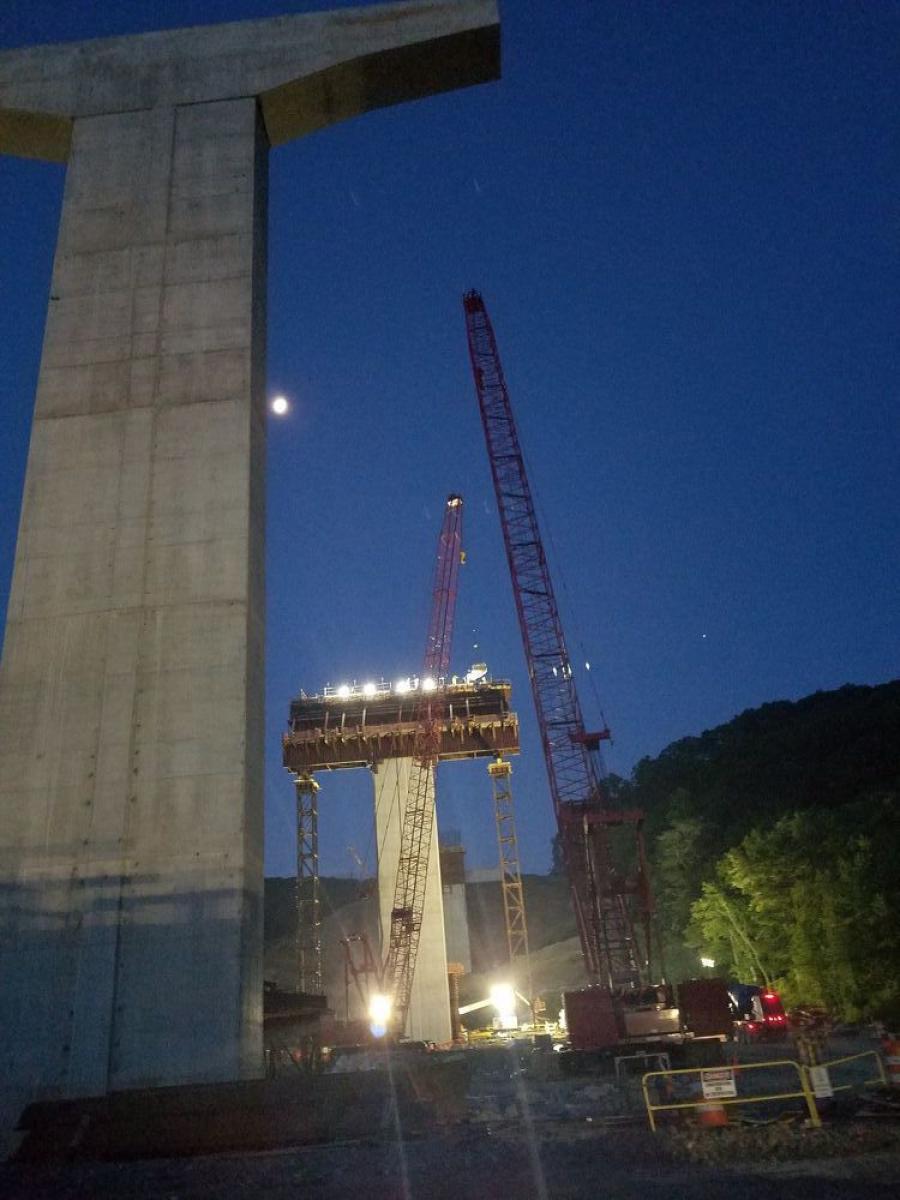 Most of construction for CSVT is off-line, resulting in minimal impacts to motorists. After-hours work also has been unremarkable. Setting beams over live traffic was performed overnight, as planned.

The job site was mostly rolling hills with some forested areas. Due to the potential for endangered bats in the area, trees could only be cut between Nov. 1 and March 31. During excavation work, a geologist was on site for the second contract, based on the potential for acid bearing rock. Only slight amounts were found.

Various excavators have been used on the project, along with dozers, trucks, rollers and cranes.

"Three cranes are required to set the beams for the river bridge," said Deptula. "This includes two to lift the girders and one to hold the girders in place, until girders can be spliced together."

Main materials being used on the job include concrete, rebar, concrete and steel beams, rock, MSE walls and pipes. Roughly nine million cu. yds. of dirt/material will be moved on the northern and southern sections combined.

Officials noted that the need for the ongoing construction is clear, and has been for a long time. In the mid-1990s, detailed analysis determined the project should not only reduce existing congestion, but also accommodate anticipated growth that would cause even greater congestion if no improvements were made. Studies also found that primary roadways in the area, such as Routes 11, 15 and 147, have experienced greater than average rates in both general and fatal crashes, underscoring the importance of improving safety. 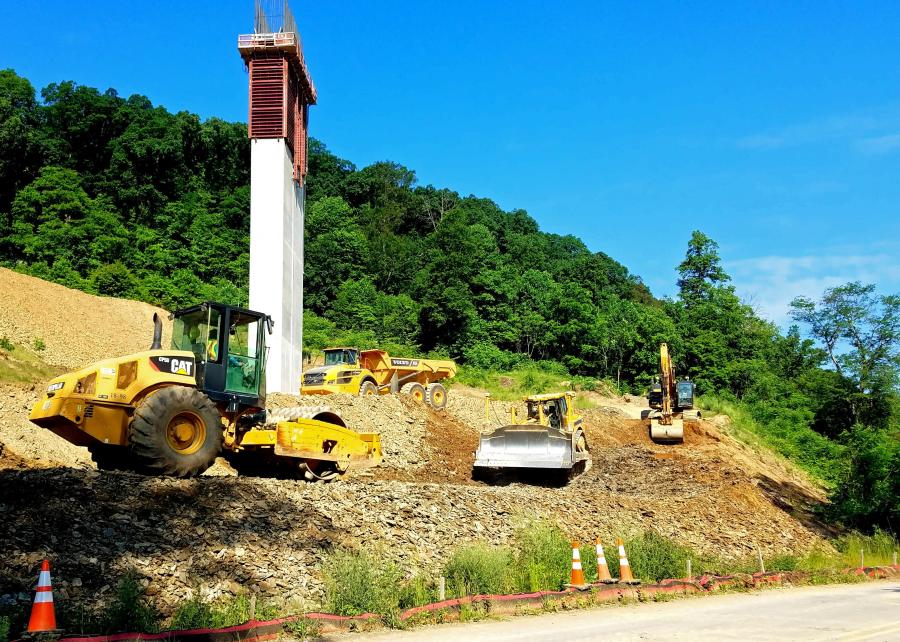 In addition, the many businesses and residences along primary roadways in the project area resulted in conflicts between slower-moving local traffic and a high percentage of vehicles, especially trucks, that are simply passing through area and expect faster, unrestricted traffic flow. Officials found those conflicts are a major contributor to congestion and safety problems; therefore, the project should therefore be designed to separate trucks and through traffic from local traffic.

"U.S. Route 15 corridor is the major north-south corridor in the central part of Pennsylvania, serving high volumes of interstate and even international traffic," said Noah Bauer, CSVT assistant project engineer. "CSVT is a missing link in a modern four-lane limited access highway along that corridor."

History in the Making

History is actually being made, as far as project size and impact on the region.

"The river bridge construction contract was the largest contract PennDOT District 3-0 has ever awarded," said Bauer. "The planning for new highway began roughly 50 years ago, but was ultimately delayed by lack of funding. The highway also directly impacts three counties and five municipalities, along with indirectly impacting numerous other municipalities within the region.

"It's very rewarding being a part of such a large project that will have such a benefit to the entire region. Getting to see the transformation of the land from hills and valleys to roads and bridges is awesome. Hearing the stories from locals about how long they have been waiting for this project and to be a part of the team of people that is helping make that happen is really gratifying. I can't imagine I will ever be a part of another project this big and this complex for the rest of my career."